One step up in the world of hot hatches brings you to vehicles like the now-discontinued Ford Focus RS, Audi S3, new Mercedes-AMG A35, and the car in question, the Mk 7.5 VW Golf R. Yes, there’s a brand new Mk8 Golf R coming out this year, and precisely because of that, we wanted a refresher on the outgoing model.

Volkswagen introduced the high-performance Golf R with the seventh-generation of the best-selling hatchback and it quickly established itself as one of the best all-rounders in the market. We recently spent a week with the outgoing Golf R to discover why the flagship Golf is so good. 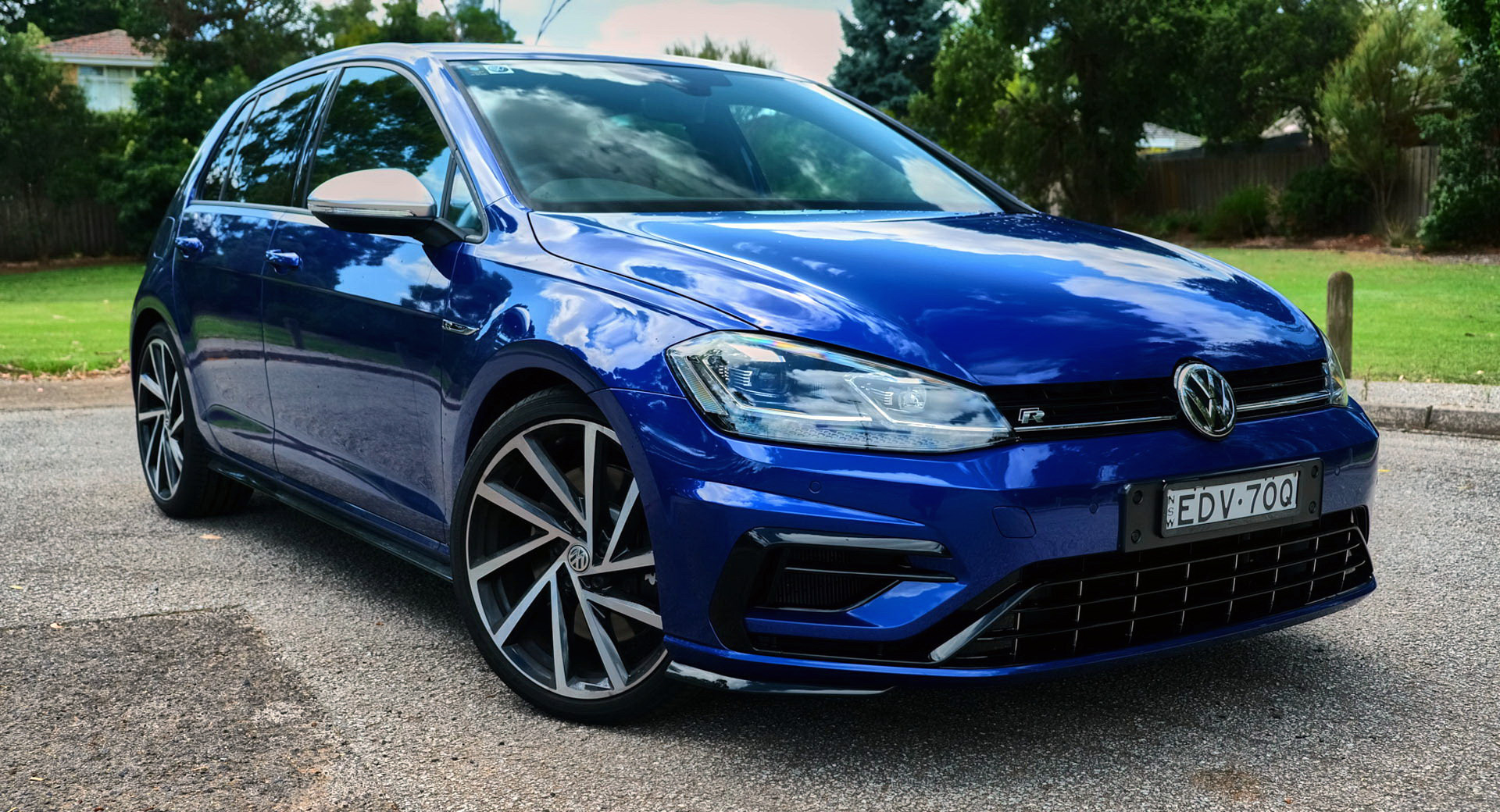 The 2019 VW Golf R was dropped from the German marque’s U.S. range of vehicles in August last year but remains on sale in Australia with a drive away price starting at AU$55,490 (US$37,348).

Power comes courtesy of a 2.0-liter turbocharged four-cylinder petrol engine offering up 213 kW (285 hp) and 380 Nm (280 lb-ft) of torque that comes as standard with a seven-speed Direct Shift Gearbox (DSG). A six-speed manual ‘box was available earlier on in the Mk 7.5’s production run but is no longer offered. With launch control enabled, VW quotes a 0-100 km/h (62 mph) time of 4.8 seconds. Power is sent through all four wheels and the car tops out at 250 km/h (155 mph). 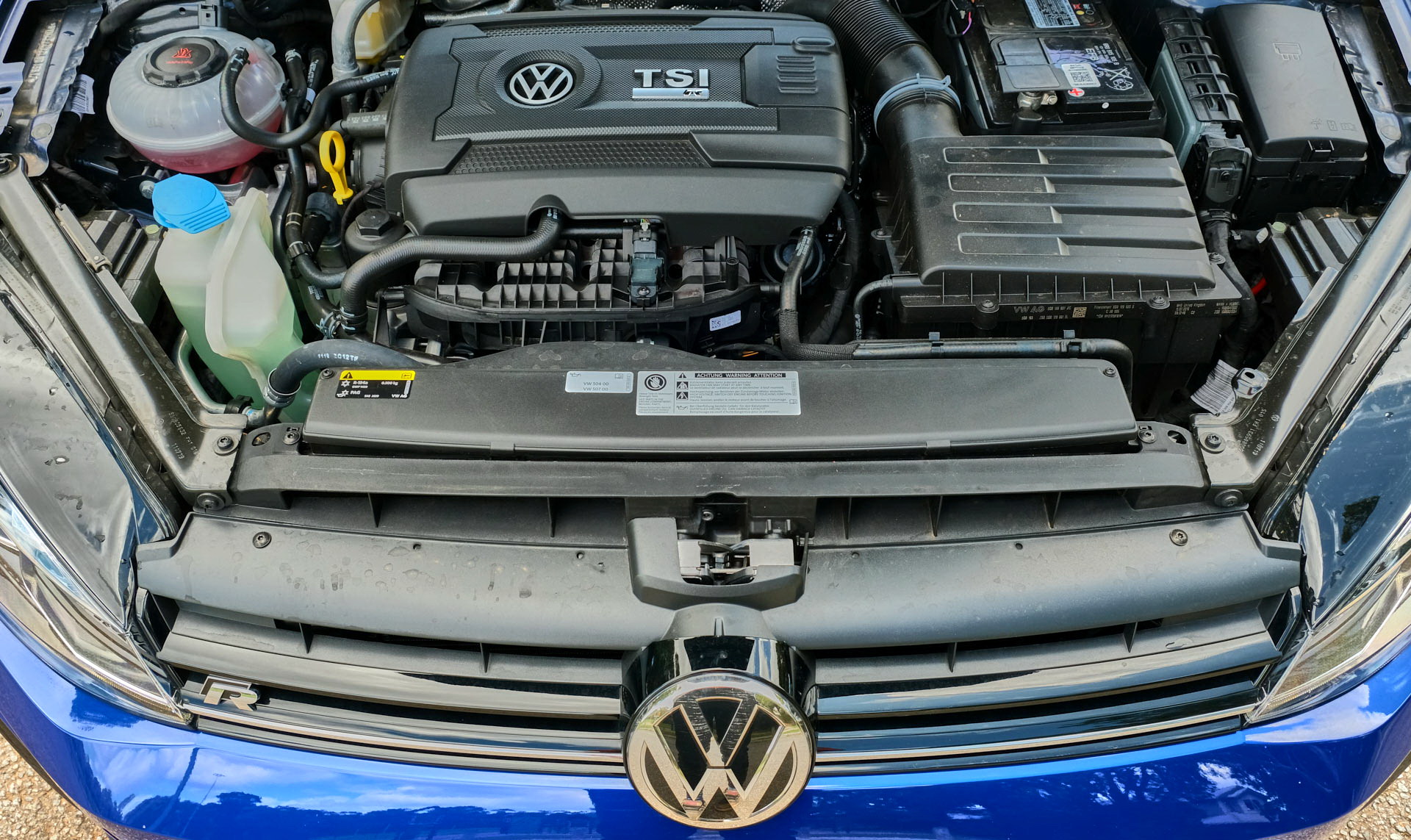 This powertrain is a force to be reckoned with on the street and can be configured through the car’s DCC/Driving Mode Selection menu. Drivers can choose between Eco, Comfort, Normal, Race, and Individual modes to alter the driving experience. Among the parameters you can change include the dampers, steering, engine, adaptive cruise control, dynamic cornering lights, air conditioning, and the interior engine sound. For the most part, I kept the steering and engine in the available Race modes while having the adaptive dampers in Normal as they become too firm in any of the other modes.

Being a small capacity turbocharged engine, it didn’t shock me that the 2.0-liter four-cylinder has a hint of turbo lag but that can be easily overcome by simply keeping the revs above 3,000 rpm if you know you’ll need instant power at the stab of the throttle.

Despite this, however, the VW Golf R doesn’t feel overly turbocharged as VW has engineered out most of the sounds you’d ordinarily associate with such motors, like the turbo flutter we all love. In addition, the car doesn’t hit you with a surge of torque and power quite like the Hyundai i30 N, for example, during in-gear acceleration even though it has more power. Instead, the power delivery is much smoother and instantly at your disposal.

Where you really feel the power of the engine is off the line. Completely switch off the traction and stability control systems, put the transmission into ‘S’ mode, firmly depress the brake pedal, pin the throttle and the car’s ECU will enable launch control. Revs are held at just above 4,000 rpm and the moment you let off the brake, the car kicks you in the back of the neck and accelerates with brutal ferocity off the line. Thanks to the all-wheel drive, there’s no need to worry about traction issues and even in the wet, launch control worked flawlessly. The only gripe is that the system does occasionally seem to hold onto first gear for a little too long. 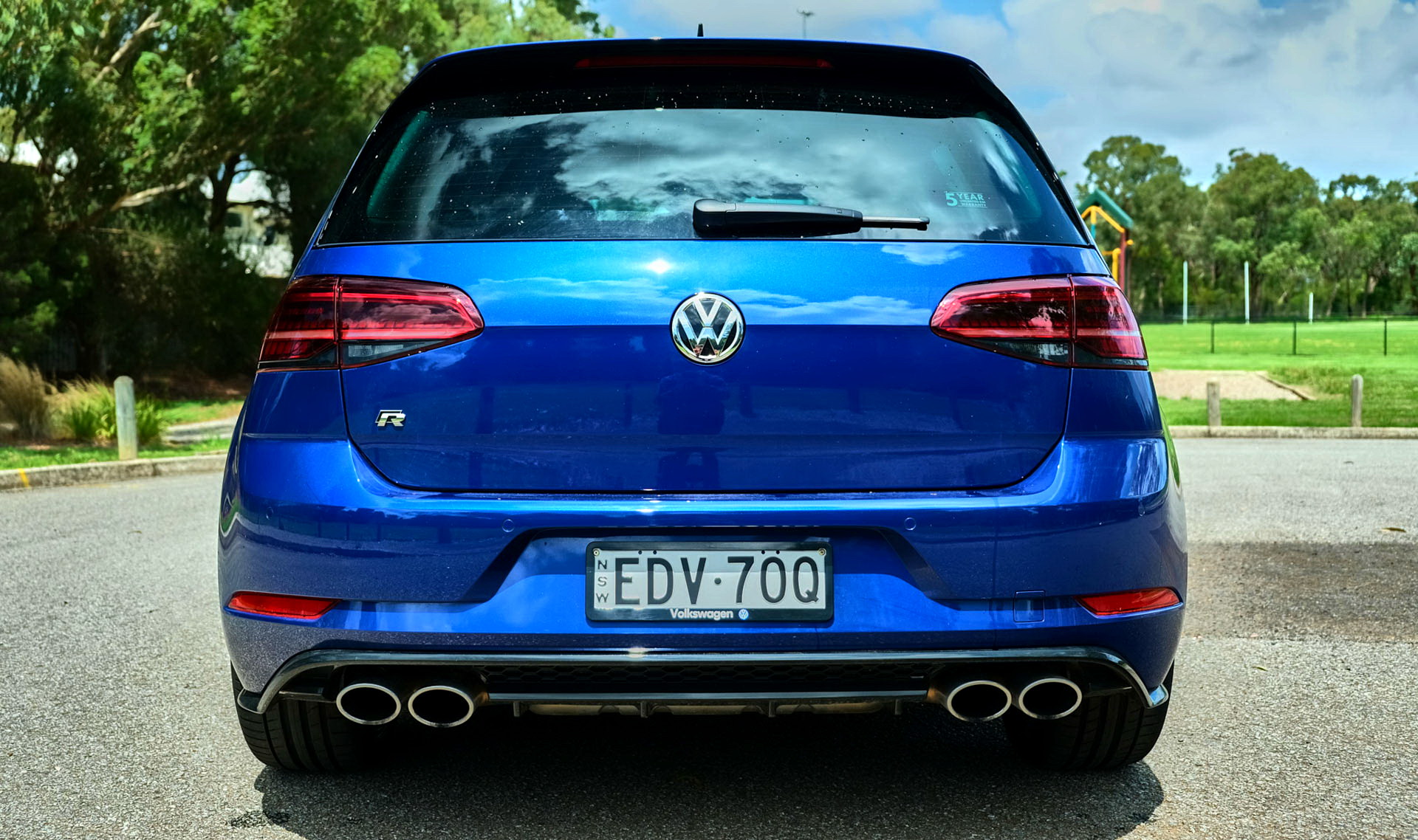 Of course, a hot hatch like this isn’t built as a straight-line weapon and really shines when the roads get twisty. The engine, transmission, all-wheel drive system, and brakes all work seamlessly to create a car that can monster its way across mountain passes with very little fuss. Get a little too eager into a corner and the R can be pushed into a bit of understeer, forcing you to pull back a little to keep everything under control. Fitted as standard are 235/35 Continental ContiSportContact tires that provide good grip but I have a feeling an even stickier set of rubber could work wonders and eliminate all mid-corner understeer.

Is there enough character?

One small gripe I do have is the lack of engine and exhaust noise that finds its way into the cabin. From the outside, the R emits a lovely crackle on upshifts while popping on downshifts but the sounds are very muffled for those inside.

Those in the market for a VW Golf R should note that the car isn’t as frisky or thrilling to drive on the limit as cars like the Ford Focus RS and even the front-wheel drive Honda Civic Type R and Hyundai i30 N. That’s a shame but where the R trumps its competitors is in its everyday driveability and comfort. This all starts in the cabin. 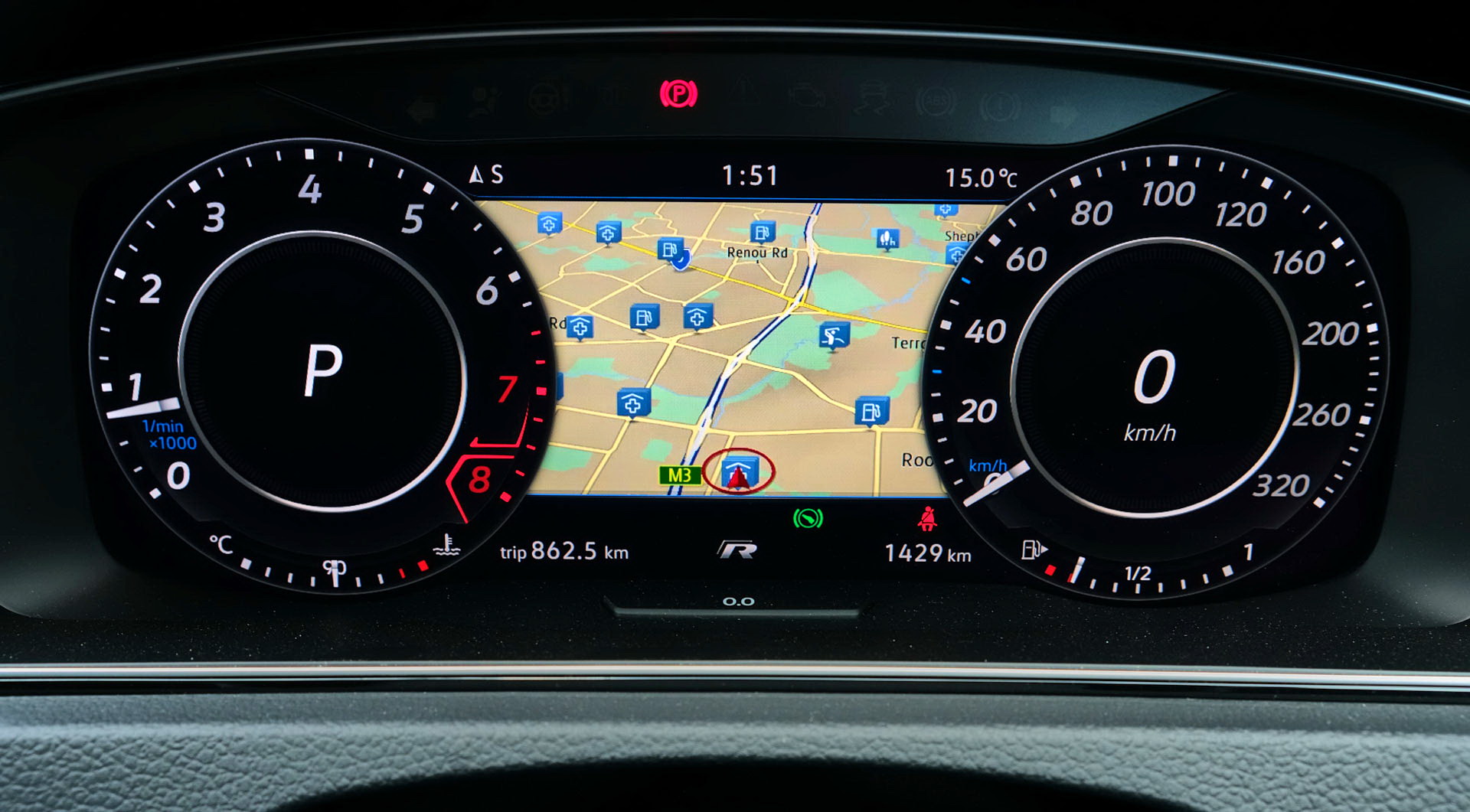 A fresh and modern feel

While the seventh-generation Golf has been in production for some markets for the better part of seven years, Volkswagen made a series of nice additions to the Mk 7.5 model and in particular the range-topping Golf R. The most beautiful element of the interior is the gorgeous 12.3-inch digital gauge cluster. This screen can be configured in a handful of ways with the central area able to display things like a navigation screen, music information, driver assistance functions, a lap timer, and consumption figures. It’s a joy to play around with.

Watch: Can The Mercedes-AMG A35 Finally Push The VW Golf R Off Its Throne?

Another welcome inclusion in the cabin is a large 9.2-inch touchscreen with VW’s Discovery Pro software and complete with Bluetooth connectivity, Apple CarPlay, Android Auto, satellite navigation, and gesture control. One sorely missed control is a physical dial for the volume, meaning you’re forced to either use the controls on the steering wheel or touch buttons next to the infotainment display. A leather-wrapped three-spoke steering wheel complete with an R badge adds to the premium feel of the interior, as do the plush leather seats and leather surfaces on the door panels.

Interior space is also more than adequate thanks to generously-proportioned storage in the front and rear doors and 343 liters (12.1 cubic-feet) of boot space in the rear. Space and headroom at the rear is also good and while our test car didn’t have the available sunroof, we’re told that even those that do provide adequate head room for taller drivers and passengers.

It may be a touch over three years since the Mk 7.5 VW Golf R was introduced in Australia but the car still feels very fresh and is up to the task of most drivers. It is a joy to drive on the limit and a pleasure to live with on a daily basis. However, the car does feel quite ‘German’ when driven at the limit and lacks some of the soul, character, and playfulness of some of its top rivals.