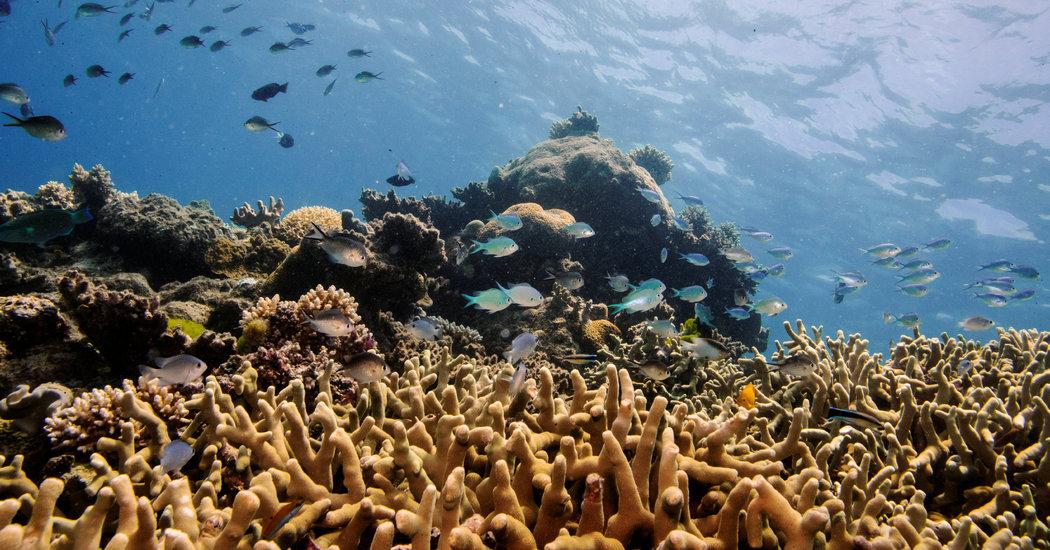 Record-breaking warm waters have bleached large parts of Australia’s Great Barrier Reef this year, as they did in 2016 and 2017, scientists reported on Thursday — the latest sign that global warming threatens the health of one of the world’s most important marine ecosystems.

Water that is warmer than normal stresses the corals that create a reef, causing them to lose color and even become white. Corals that experience minor or moderate bleaching usually recover, but those that are severely bleached often die.

Scientists say that reefs around the world have been dying at an alarming rate for several years due to global warming. Reef corals grow very slowly, and while most of them can only live in warm water, they are highly sensitive to above-normal temperatures.

The Great Barrier Reef is estimated to support thousands of marine species, and it is essential to the lives of some aboriginal groups and the natives of the Torres Strait Islands, between the Australian mainland and New Guinea. It also drives significant economic activities like tourism and fishing; scientists said that important areas for reef tourism, particularly in the north, have not been hit badly this year.

The Great Barrier Reef Authority, an Australian government agency, based its announcement of mass bleaching on observations, still underway, made in the water and from the air.

The data is new, but not surprising. The same weather patterns that generated record-breaking heat and catastrophic fires in Australia during the Southern Hemisphere’s spring and summer have also heated the oceans.

In terms of water temperatures around the reef, February was the warmest month on record, with readings in some places more than 5 degrees Fahrenheit above average for the time of year, the authority recently reported.

“The Great Barrier Reef remains under pressure from heat stress that accumulated over the 2019/20 summer, particularly in February and early March 2020, and resultant bleaching that is occurring,” the authority said in a statement released on Thursday.

The reef — really a network of hundreds of reefs — is the world’s largest, running for more than 1,100 miles in the Pacific Ocean, off Australia’s tropical northeastern coast. It consists primarily of the bleached remains of countless past generations of corals and mollusks, with living corals and other invertebrates clinging to its surface.

“Some reefs that have been surveyed have had no bleaching whatsoever, right through to reefs with very severe bleaching, with 80 percent or more of the corals observed being bleached,” Dr. Wachenfeld said. Taking into account 2016 and 2017, he added, “many of those reefs are bleaching for the third time.”

In 2017, after the last mass bleaching, scientists reported that large stretches of the reef were dead or dying.

Last year, before the recent heat wave and bleaching, the authority published a detailed assessment of the reef’s outlook, an analysis that is conducted every five years. Of the dozens of ecological indicators it gauged, about 40 percent “are in poor to very poor condition,” it said, and “some critical ecosystem functions have deteriorated since 2014.”

The government’s Reef 2050 plan aims to reduce the water pollution that also threatens corals, regulating factors like agricultural runoff, dredging and port development. There are also programs in place to control sudden spikes in the population of crown-of-thorns seastars, which feed on coral.

But those measures cannot make up for the damage done by global warming, scientists warn. “Climate change,” the reef authority said Thursday, “remains the single greatest challenge to the reef.”