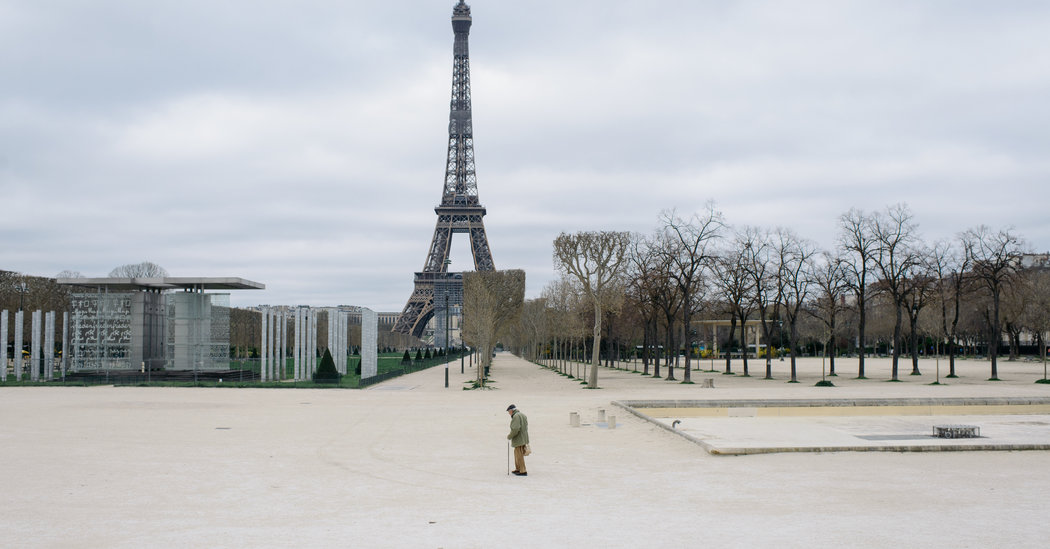 BRUSSELS — With the rapid spread of the new coronavirus, the flattened world has developed a few speed bumps. With trade disrupted and economies paralyzed, some consider that the nation-state is back, as if it ever went away.

For countries like the United States, China and Russia, that is normality. But for the European Union, this continuing experiment in shared sovereignty, borderless trade and freedom of movement, the virus has been a serious systemic shock. Some have even wondered if the bloc itself could shatter under the pressure.

But after a fumbling start, the European Union and its institutions, including the European Central Bank, have begun to cope better with the new challenge of Europe as the epicenter of the virus.

Huge issues remain to be resolved, however. The whole concept of European “solidarity” is being challenged.

The question, said Marc Pierini of Carnegie Europe, is a pretty simple one: “Can an E.U.-level response to this massive crisis prove to citizens that the E.U. will protect them and show solidarity?”

The answer so far has been mixed. There is no doubt that the first impulse of important states, like Germany and Austria, was to retreat within their borders, which were being reestablished in panic.

Despite increased efforts from Brussels, six countries still have export bans on medical equipment: Italy, Bulgaria, Romania, Poland, the Czech Republic and Slovakia. France has nationalized its supplies, and 12 states have put up internal borders, blocking the easy transport of goods through the bloc.

But even as some borders have remained closed to combat the spread of the virus, that initial flinching is steadily giving way to pressure from large states, like France, Italy and Spain, joined by six others, to do more collectively, especially financially, to issue a “common debt instrument,” a kind of Eurobond for the virus to help afflicted countries.

For now, that idea is opposed by the more frugal northern states like the Netherlands and Germany, which think there are other ways to help Italy and Spain, but it will surely be discussed Thursday evening, when European leaders meet in a teleconferenced summit.

The meeting is part of Europe’s deepening effort at coordination, after a faltering start.

“We need to be pretty honest and say that the initial E.U. response was chaotic and belated,” said Agata Gostynska-Jakubowska of the Center for European Reform in Brussels.

It was obvious by the end of last year that the virus would come to Europe, she said, but even after it developed in Italy, “member states took center stage while the commission,” the bloc’s executive arm, “and other E.U. institutions were rather absent, and the harm was done, playing into the hands of Euroskeptics.’’

As Europe dithered, states recreated internal borders, damaging the single market. Germany in particular has come under criticism for initially banning the export of supplies like masks, protective gear and medical equipment.

Once the commission came up with a European Union-wide restriction on exports, Germany lifted its own, but that took some time. Since then it has shown more solidarity by accepting some coronavirus patients from Italy and France.

Only now is the bloc organizing 50 million euros — about $54 million — to buy needed medical equipment to distribute to hospitals where it is most needed.

Embarrassingly for Europe’s leaders, and even for the United States, it was China that stepped in early with medical aid.

“If there is an ineffective European response, a lot has to do with what the member states do,” he said. “E.U. institutions need to do the right thing, but they need the permission of member states to act.”

There was confusion at the beginning, Mr. Zuleeg said. “People didn’t grasp the magnitude of the crisis,” he said. “Different countries took different approaches and the commission was uncertain what to do.”

“There is still a huge risk to the union,” said Daniela Schwarzer, director of the German Council on Foreign Relations in Berlin. “All the disintegrative tendencies can accelerate.’’

Even when Chancellor Angela Merkel made a rare national address on the crisis a week ago, she failed to mention Europe at all.

“It was possible to frame a national approach in a European perspective,” Ms. Schwarzer said, noting that President Emmanuel Macron of France did so, emphasizing “the Europe that protects,” but Ms. Merkel did not.

A senior adviser to Mr. Macron noted that Europeans have now provided as many masks to Italy as China, but given the delay, they are getting little credit for it.

“Mistakes were made for sure, there was some flip-flopping, hesitations, but that’s the case everywhere in the world,” the official said. “When we see what’s going on in the United States today, Europe is not the continent that’s the least organized.”

Part of the problem for Brussels is structural. Health, like terrorism, is considered an issue of national security and is the responsibility of individual member states.

According to the governing treaties, while Brussels has exclusive competence over trade, and has shared competence with member states over matters like agriculture and the single market, on health it can only “encourage cooperation” among states, promote research and “complement national policies.”

Europe’s best instrument in a crisis, then, is money. While it could have acted faster, the European Central Bank on March 19 came up with a huge and unparalleled plan for further quantitative easing — a bond-buying plan — of up to €750 billion, some 6 percent of eurozone gross domestic product — with the promise of more if necessary.

The European Commission has relaxed its rules on state aid to companies and on limits to annual fiscal deficits, and the European Investment Bank has promised up to €40 billion so far in financing, to help with liquidity for companies.

But more will be needed, especially as the size of the economic hit becomes clearer in a bloc that already had anemic growth.

Germany is crucial, and policy changes slowly with the current coalition. But Germany has moved, or has been pushed to move, further toward economic support of member states, Mr. Zuleeg said.

Given that “no country can be blamed for being hit by the virus, there is a clear reason to show solidarity,” he said.

There is growing recognition that no member state can handle the crisis on its own, but whether that strengthens the European Union in the hazy aftermath of the pandemic is hardly clear. There are already calls for the commission to work to coordinate how the crisis ends, given the economic and human disruption, to avoid the chaos of the start.

“We don’t know if Europe will become stronger, since we’re really only at the beginning of this pandemic whose course we don’t yet know,” said François Heisbourg, a French analyst.

“The E.U. may strengthen if it demonstrates measures relevant to the crisis and if it can use its scale to overcome the limitations of purely national policies,” he said. But the fuss over borders is exaggerated, he added.

“The virus travels with the person, so borders are relevant,” he said. “People talked about how catastrophic it was to have temporary borders between France and Germany, about Europe splintering,” Mr. Heisbourg added. “But not everything is geopolitical. You can’t fight this without borders. It’s about the logic of taming the epidemic.”

If populists criticize the performance of Brussels, the pandemic is also an argument for giving Brussels more power over health research, standards and the coordination of policies, he argued.

Mr. Zuleeg agrees. “When it comes to cross-border issues like this we need to set up ways to react quickly,” he said. “We had to do it in the financial and monetary field with the debt crisis, and now we’ll have to do it in health. Not because someone wants ‘a bigger Europe,’ but because we need to do it. We are interdependent across borders.”