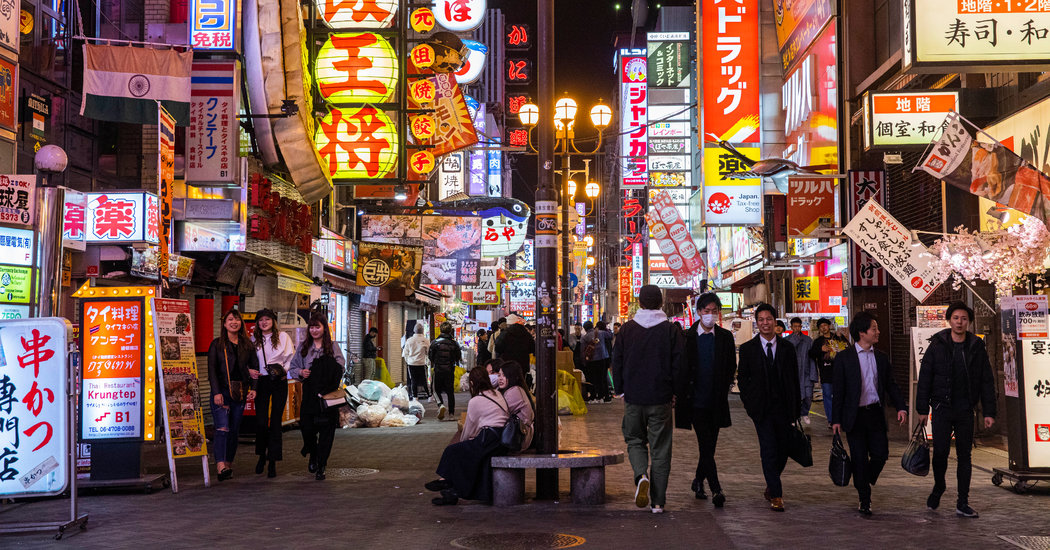 TOKYO — Japan had only a few dozen confirmed coronavirus infections when the 30-something nurse with a slight sore throat boarded a bus to Osaka, the country’s third-largest city, to attend a Valentine’s weekend performance by pop bands at a music club.

Less than two weeks later, she tested positive for the virus, and the authorities swiftly alerted others who had been at the club. As more infections soon emerged from three other music venues in the city, officials tested concertgoers and their close contacts, and urged others to stay home. All told, 106 cases were linked to the clubs, and nine people are still hospitalized.

But less than a month after the nurse tested positive, the governor of Osaka declared the outbreak over.

Ever since the first coronavirus case was confirmed in Japan in mid-January, health officials have reassured the public that they have moved quickly to prevent the virus from raging out of control. At the same time, though, Japan has puzzled epidemiologists as it has avoided the grim situations in places like Italy and New York without draconian restrictions on movement, economically devastating lockdowns or even widespread testing.

The puzzle may be about to gain some clarity. On Thursday, Katsunobu Kato, Japan’s health minister, said he had informed Prime Minister Shinzo Abe that there was evidence that Japan was now at a high risk of rampant infection.

On Wednesday night, just a day after Japan and the International Olympic Committee agreed to delay the Tokyo Summer Games for a year because of the coronavirus pandemic, the governor of Tokyo, Yuriko Koike, warned citizens that the sprawling city of close to 14 million people was in a “critical phase before a possible infection explosion.”

Cases in Tokyo spiked this week, setting records for four days running — including an announcement of 47 cases on Thursday — as travelers returned from overseas. The limited testing for the virus has raised fears that many more are going undetected.

Ms. Koike implored the people of Tokyo to work from home, avoid unnecessary outings and stay inside over the weekend. On Thursday, governors from four neighboring prefectures also requested that residents refrain over the weekend from going outside for anything other than urgent needs.

“If we go without doing anything now,” Ms. Koike said, “the situation will worsen. I ask for everyone’s cooperation.”

The public so far has not taken such warnings seriously. Although schools have been closed for a month and the government has requested that large sports and cultural events be canceled or delayed, the rest of life has returned to normal. People have been riding crowded subways, congregating in parks to view the cherry blossoms, shopping, drinking and dining, comforted by Japan’s relatively low number of confirmed coronavirus cases and deaths.

Even at one of the Osaka clubs where the outbreak occurred earlier this month, a group of 40 young women attended a performance by a boy band on Wednesday, jumping and waving their hands in a small, unventilated space for close to two hours.

As other parts of the world fall into a spiral of infections, hospital overflows and deaths, Japan, a country of almost 127 million people, has reported only 1,300 cases and 45 deaths, with one of the slowest-progressing death rates in the world despite its aging population.

“It’s either they did something right,” said Dr. Peter Rabinowitz, co-director of the University of Washington MetaCenter for Pandemic Preparedness and Global Health Security, “or they didn’t, and we just don’t know about it yet.”

As Japan has seemed to pull off a feat of infection containment, it has presented an intriguing contrast to other countries in Asia, where the pandemic began. It did not put cities on lockdown, as China did. It has not deployed modern surveillance technology like a growing number of countries, including Singapore. Nor did it adopt the kind of wholesale testing that helped South Korea isolate and treat people before they could spread the disease.

Dr. Tomoya Saito, director of the department of health crisis management at the National Institute of Public Health, said the limited testing was intentional. Those who are tested are referred by doctors, usually after patients have had fevers and other symptoms for two to four days. Japan’s current policy is to admit anyone who tests positive to a hospital, so officials want to avoid draining health care resources with less severe cases.

Dr. Saito said that part of Japan’s seeming resistance to infection may result from measures common in the culture, including frequent hand-washing and bowing instead of shaking hands. People are also much more likely to wear masks on trains and in public spaces. “It’s a kind of social distancing,” Dr. Saito said.

But Jeffrey Shaman, an epidemiologist at Columbia University and the senior author of a report that projected five to 10 undetected cases for every confirmed infection of the coronavirus based on data from China, said Japan’s approach was a “gamble.”

“The risk is that things may be brewing underneath the surface that you don’t recognize until it’s also a little bit too late,” Dr. Shaman said.

In Osaka, a report prepared for the health ministry this month projected that by early April, the city could have close to 3,400 infections, 227 of them serious. “It’s possible that provision of medical treatment to seriously ill patients may become difficult,” the report said.

On Wednesday, Osaka’s governor, Hirofumi Yoshimura, said he was working to secure an additional 600 beds in hospital isolation wards that could accommodate patients with the most severe infections.

Dr. Masaya Yamato, chief of infectious diseases at Rinku General Medical Center in Osaka, said the region was moving toward a model where coronavirus patients with mild symptoms could stay at home in order to save hospital beds for the seriously ill.

In Tokyo, there are only 100 beds designated to handle those with serious infectious diseases. On Wednesday, the city government pledged to secure 600 more.

The request by Tokyo’s governor to stay inside this weekend, Dr. Yamato said, may be too weak to defer a crisis.

“It’s better that Prime Minister Abe decisively declare a lockdown in Tokyo,” Dr. Yamato said. “The economic impact should not be a top priority. Tokyo should lock down for two to three weeks. Otherwise, Tokyo’s medical system could collapse.”

Mr. Abe’s administration has appointed a task force to determine whether he should declare a state of emergency, a measure that he said was unnecessary earlier this month.

For now, the public is largely unmoved. Although some grocery store shelves in Tokyo were cleared out on Wednesday night after the governor’s request, it was business as usual on Thursday.

Near Shinbashi Station in central Tokyo, men in black suits sat elbow to elbow at a counter in a restaurant offering a fried noodle lunch special for 500 yen, about $4.50. A long line formed outside a McDonald’s, and smokers crowded a small pen near the station entrance.

In Shinjuku Gyoen park in western Tokyo, where cherry blossoms were near peak bloom, a sign at the entrance informed visitors that, as part of antivirus efforts, picnic blankets and alcohol were banned. Security guards with megaphones wandered through groups of people who were taking photos with the flowers, warning them to wash their hands.

At a store not far from the park, Kazuhisa Haraguchi, 36, stood in a long line for a chance to buy a limited-edition pair of Nike Air Max sneakers.

Mr. Haraguchi said that he was worried about how the virus was spreading in the United States and Europe, but that he wasn’t too concerned about the situation in Japan.

“It’s scary, but it doesn’t seem like there’s much of it here right now,” he said. “If I die, at least I’ll die with my sneakers.”