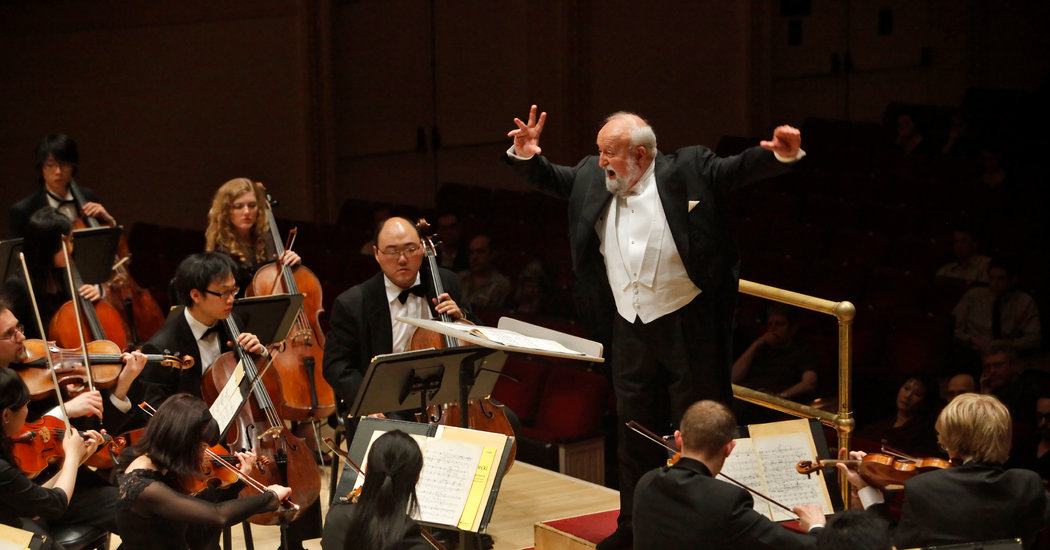 Krzysztof Penderecki, a Polish composer and conductor whose modernist works jumped from the concert hall to popular culture, turning up in soundtracks for films like “The Exorcist” and “The Shining” and influencing a generation of edgy rock musicians, died on Sunday at his home in Krakow. He was 86.

His death was confirmed by Andrzej Giza, the director of the Ludwig van Beethoven Association, which was founded by Mr. Penderecki’s wife, Elzbieta.

Mr. Penderecki was regarded as Poland’s pre-eminent composer for more than half a century, and in all those years he never seemed to sit still. Beginning in the 1960s with radical ideas that placed him firmly in the avant-garde, he went on to produce dozens of compositions including eight symphonies, four operas, a requiem and other choral works, and several concertos he cheerfully described as being almost impossible to play.

Among those who could were the violinist Anne-Sophie Mutter and the cellist Mstislav Rostropovich, whose recordings of the concertos he wrote for them won Grammy Awards in 1999 and 1988, respectively

Mr. Penderecki was most widely known for choral compositions evoking Poland’s ardent Catholicism and history of foreign domination, and for his early experimental works, with their massive tone clusters and disregard for melody and harmony. Those ideas would reverberate for decades after he himself had pronounced them “more destructive than constructive” and changed course toward neo-Romanticism.

(His decision to move on was partly political: The Polish avant-garde movement had created an unhealthy illusion of freedom in a country living under Communism, he said. But it was also artistic: Experimentation had reached an impasse, he told a Canadian interviewer in 1998, because “we discovered everything!”)

Still, it was compositions from the wild first decade of his career, including “Threnody for the Victims of Hiroshima” (1960), “Polymorphia” (1961) and the “St. Luke Passion” (1966) that brought him lasting international recognition while he was still a young man.

The threnody, in particular, is a much-studied example of startling emotional effects created from abstract concepts. Following a score that often looks more like geometry homework than conventional notation, it forces an ensemble of 52 string instruments to produce relentless, nerve-jangling sounds that can suggest nuclear annihilation. Yet it was said that Mr. Penderecki dedicated it to the victims of Hiroshima only after hearing the piece performed.

Though he wrote little expressly for movies, film directors picked up on Mr. Penderecki. His compositions could perfectly amplify scenes of dread, horror, murder and mayhem. His music can be heard in Martin Scorsese’s “Shutter Island,” Peter Weir’s “Fearless,” David Lynch’s “Wild at Heart” and “Inland Empire” and, of course, Stanley Kubrick’s “Shining” and William Friedkin’s “Exorcist.”

Mr. Penderecki also appealed to many a pop musician. Artists as disparate as Kele Okereke of Bloc Party and Robbie Robertson of the Band professed to have been inspired by him. But his influence is most directly evident in the music of Jonny Greenwood, the classically trained guitarist of Radiohead.

Mr. Greenwood’s own score for the movie “There Will Be Blood,” for example, features his “Popcorn Superhet Receiver,” a work directly inspired by the Hiroshima threnody.

According to an account in The Guardian, the two composers first met after a concert, when Mr. Greenwood, in his words, went to shake Mr. Penderecki’s hand “like a sad fanboy.” They later pursued a collaboration culminating in 2011 with a series of concerts that included both “Polymorphia” and Mr. Greenwood’s work for strings, “48 Responses to Polymorphia.” Mr. Pendercki was pleased: Nine thousand young people packed the auditorium at the first performance, in Wroclaw, “and they had never heard about this old guy Penderecki’s music.”

Sometimes he was famous for the wrong reasons, like missing due dates, as with his commission from the Lyric Opera of Chicago to write a new work for the American Bicentennial in 1976. While American composers fumed over the choice of a foreigner to do the job, the fearless Mr. Penderecki envisioned something grand: a kind of oratorio-opera drawn from Milton’s epic “Paradise Lost,” with an English libretto by Christopher Fry using much of the original text.

Alas, it could not be done in time for the Bicentennial: the premiere was delayed until November 1978. In the end, the critics didn’t much like it.

But then, opera had been his most troublesome genre. Even “The Devils of Loudun” (1969), his first opera and the most popular, got mixed reviews and two thumbs down from the Vatican, which tried in vain to keep the composer from going ahead with his interpretation of a 17th-century scandal in the church.

On the podium, Mr. Penderecki was a powerful, bearded figure who conducted with sweeping gestures befitting his music. Consider the mighty forces required for his heavily choral Seventh Symphony, subtitled “Seven Gates of Jerusalem,” written to commemorate the city’s third millennium in 1996. It calls for a huge orchestra, offstage brass and woodwinds, three choirs, five soloists and a narrator.

He seldom regarded his work as completely finished, adding new layers at will to old compositions. The Polish Requiem, for example, began with a single piece, the Lacrimosa, written for the unveiling of a statue at the Gdansk shipyard to honor those killed in the anti-government riots in 1970. He expanded it into a large-scale Mass, first performed in 1984; expanded it again in 1993; and in 2005 added a final Ciaccona in honor of Pope John Paul II.

Whatever the form of Mr. Pendercki’s music, darkness was a constant. The New York Times critic Bernard Holland, writing about a Carnegie Hall concert in 1986 with Mr. Penderecki leading his Cracow Philharmonic, called the composer “our most skillful purveyor of anxiety, foreboding and depression.” He found it strange that Shostakovich’s gloomy Sixth Symphony, the only work on the program not written by Mr. Penderecki, should end up being a leavening agent.

The composer’s personal circumstances, by contrast, were the opposite of dreary. Born on Nov. 23 1933, in Debica, in southeastern Poland, to Tadeusz, a lawyer, and Zofia Penderecki, he became a prosperous man, living in a manor house on 20 acres in Lutoslawice, Poland, that he lovingly developed as an arboretum.

He had as many commissions as he could handle, and enjoyed a lucrative overlapping career as conductor of the Cracow Symphony and frequent guest conductor abroad. He married an accomplished woman, the nuclear physicist Elzbieta Solecka. She and three children, Beata, Lukasz and Dominika, survive him.

What troubled his imagination was the past. In an interview with a Louisiana television station in 2013, he said: “I was not living in easy times. If I would be born in New Zealand, maybe, I would never write the Polish Requiem or pieces which were connected with the history of war.

“But this was my childhood. War was the main subject, and also in our family. My uncles were killed by the Germans. Our house was in the middle of town; behind it was the ghetto, from which Jews were sent to concentration camps.”

And after the war, there were 45 years of living under a puppet government, when “no politics was possible without asking Moscow.”

Still, there was a wrinkle that changed the lives of all young Polish composers. Beginning in the late 1950s, the country was allowed to hear Western music, which brought a flood of previously unheard sounds: electronic music, the work of John Cage. Mr. Penderecki worked in an electronics studio for a while, and the experience directly influenced his early compositions.

Over the years, Mr. Penderecki strove to develop a style that would synthesize many sources, going back to Bruckner and beyond but also accepting more modern influences. He was thus open-minded about trends in music generally, and not overly concerned about the future of the “classical” kinds.

“Listening to classical music is like reading philosophy books,” he said in an interview posted on a Polish website in 2015. “Not everybody has to do it.”

At the same time, he had a long perspective on the cyclical nature of tastes. “Music in the ’50s isolated itself from popular music and then slowly, step by step, I think it might have begun in films, it started coming back,” he said.

“They learn from us and, when it comes to reaching a larger audience, we learn from them. Used properly and wisely, everything is good.”