Much like his father, the infamous dictator Saddam Hussein, Uday Hussein was not the type of guy you wanted to have anything to do with.

Saddam’s eldest son was a ruthless, violent and unstable man accused of perpetrating so many horrible crimes than even his father had enough of him on more than one occasion. Why on earth are we mentioning him, then? Well, like many dictators and their offspring, Uday had a thing for fast cars.

He had an extensive exotic car collection which included rare machines like the Ferrari F40 and Lamborghini LM002, to name only a few.

Watch Also: Oh, No! Ferrari F40 Devoured By Fire In Monaco, Man Tries To Extinguish It With Garden Hose

The story goes that at one point, Saddam got so angry with his son’s murderous behavior and excesses that he personally set fire to a garage that included many of Uday’s cars. The rest of his prized possessions did not fare better, however, as when the United States invaded Iraq in 2003, Uday ordered his henchmen to burn the entire collection rather than have it seized by Uncle Sam.

The one that got away: the Rosso Corsa Ferrari F40 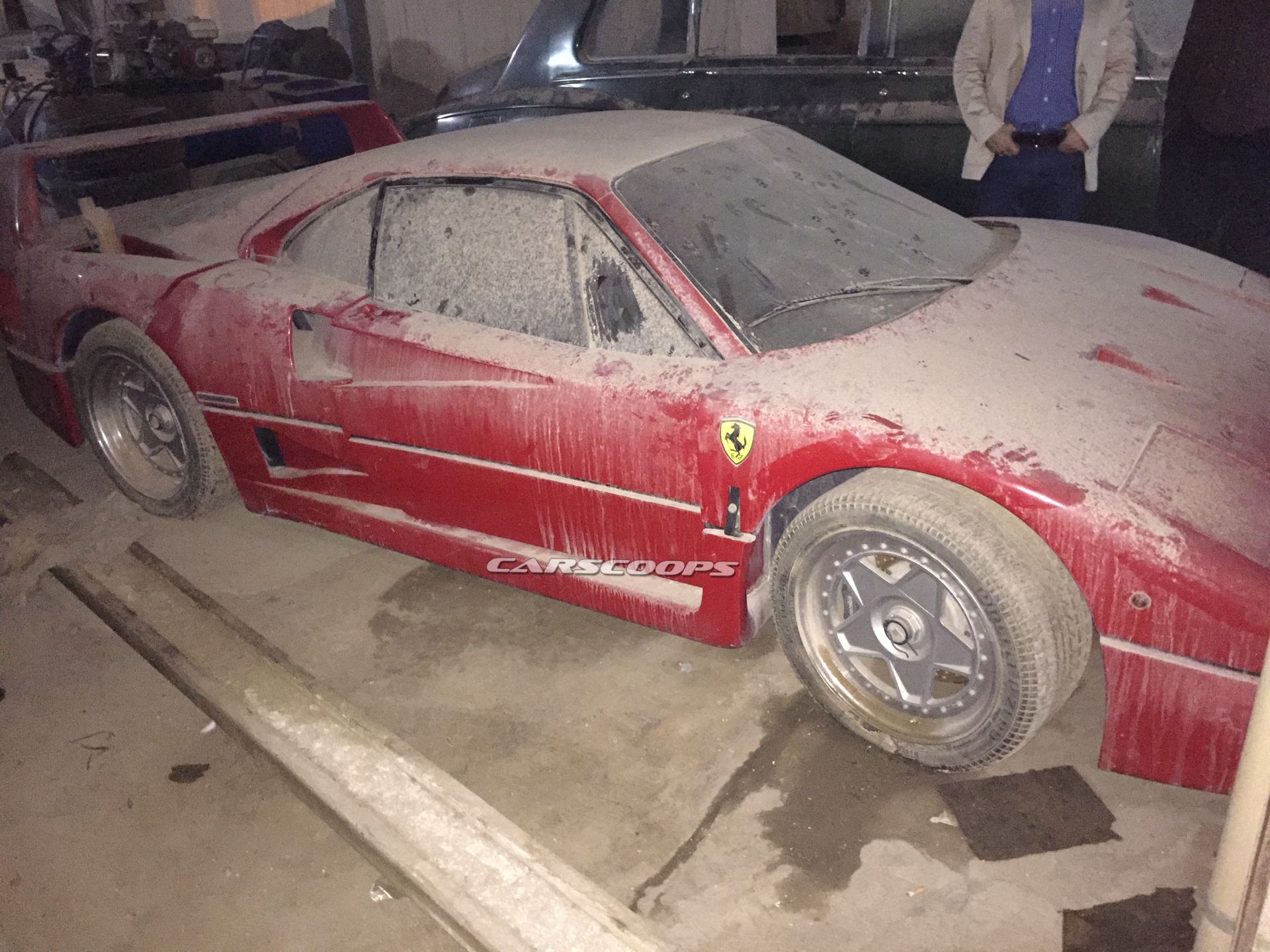 Apparently, not all the cars were destroyed and the Ferrari F40 somehow escaped the inferno that was Baghdad at the time. However, no one had known its whereabouts since the war. This is where the story gets really interesting, as Stockholm-based car enthusiast of Iraqi descent Mazan Amin tells CarScoops. “It all started around 2013 when I sat and looked at Rennlist where there was a thread about abandoned cars. There I saw a picture of a Ferrari F40 and started studying the pictures more and more,” Mazan recalls.

Two years later, he showed the photos to his father who recognized the place where the car was photographed as their hometown of Erbil, the capital of Iraq’s Kurdistan region. Excited to have a lead, Mazan couldn’t wait for his next trip to Iraqi Kurdistan. When that happened, he and his dad went to the exact location the photos were taken.

“We went out there to have a look, but the car was not at this location anymore and had been moved from there. My dad asked around a bit in the shops and at the gas station that was nearby. We were then told that it was a guy at a car repair shop who moved the car to his workshop not so long ago. We got his name and where his workshop was and went there the day after and got hold of this person,” Mazan remembers. 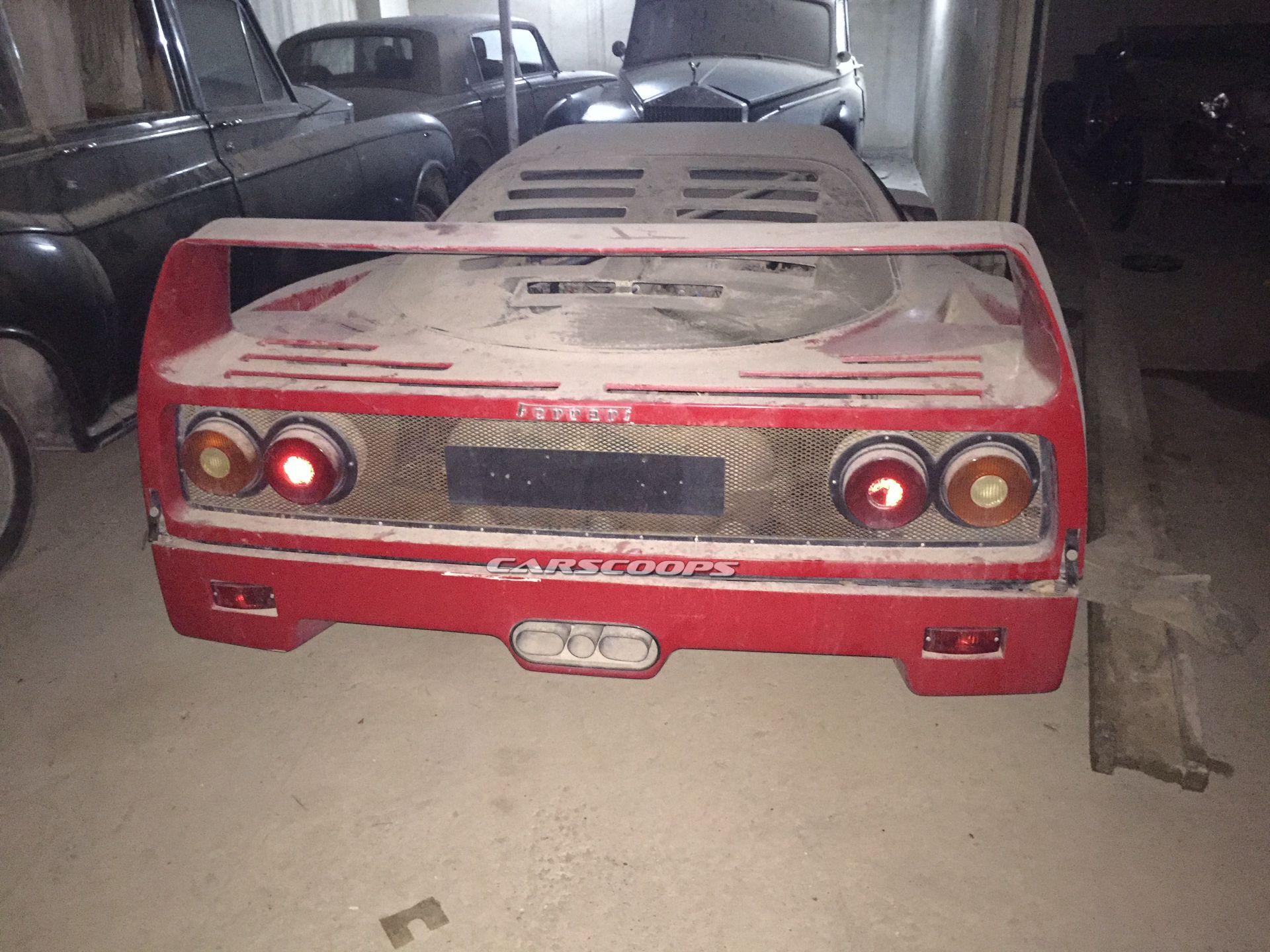 Tracking down Uday Hussein’s lost Ferrari F40 was not going to be that easy, though. What followed was stuff you only get to see in action movies. When they met the guy, he admitted to having had the F40 in his workshop at one point. However, the Italian supercar had been moved to a secret place by the owner later on.

“We asked if there was an opportunity for him to contact the owner and see if me and my dad had a chance to have a look at the car and see if we could come to a deal,” Mazan recalls. The guy at the workshop agreed but nothing happened so our hero went back there the next day. He got lucky that time around as the owner answered the phone and agreed to meet and show them the car.

Read Also: Ha! In Iraqi Kurdistan, They Call The Chrysler 300 The Obama

The owner instructed them to wait to be picked up from a cafe the following day. That’s exactly what Mazan and his father did but they were just about ready to leave after a long wait when the unexpected happened.

The moment everything seemed to have gone painfully wrong 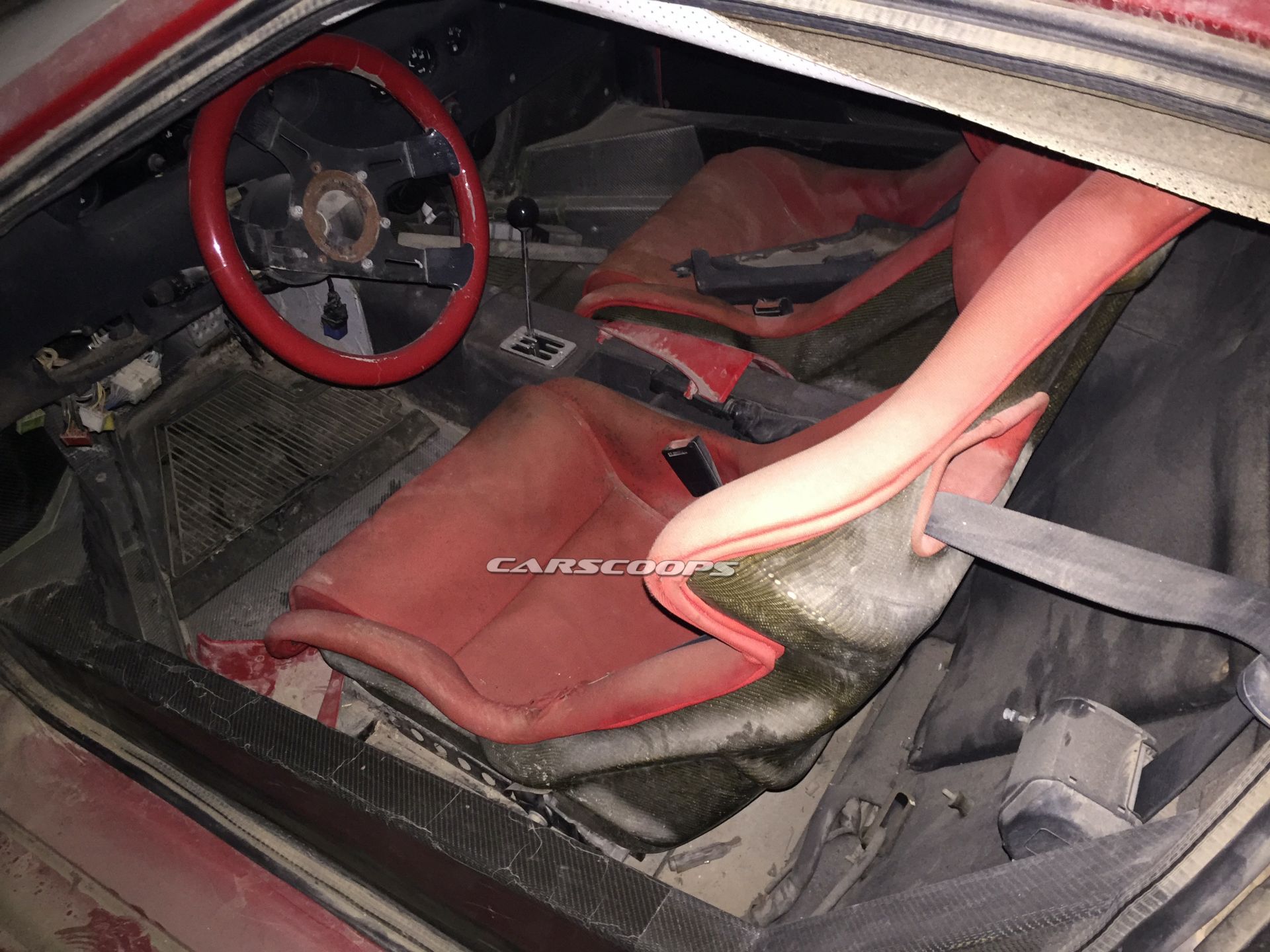 “After about three hours, two Toyota Landcruisers arrived with 2-3 men in each car. All of them with Kalashnikovs hung around their shoulders. They jumped out and asked if we are going to meet this gentleman, they told us his name and we said yes. They asked us to jump into their cars and they drove off,” Mazan recounts.

After a short drive, they arrived at a huge house with towers at each end, camera surveillance and armed guards. The owner greeted them and showed them a Ferrari 360 Modena and a red BMW Z8, much to Mazan’s disappointment.

“The gentleman, who was a copy of Al Capone in a tracksuit and back combed hair, says ‘Yes, yes, yes, but these are not the cars you should look at, we will go to another location’”. Relieved to hear that, Mazan and his father were taken to a less glamorous area. Once at the spot and past a large gate, they finally got to see what seemed like a mirage up to that precise moment: Uday Hussein’s very own Ferrari F40. 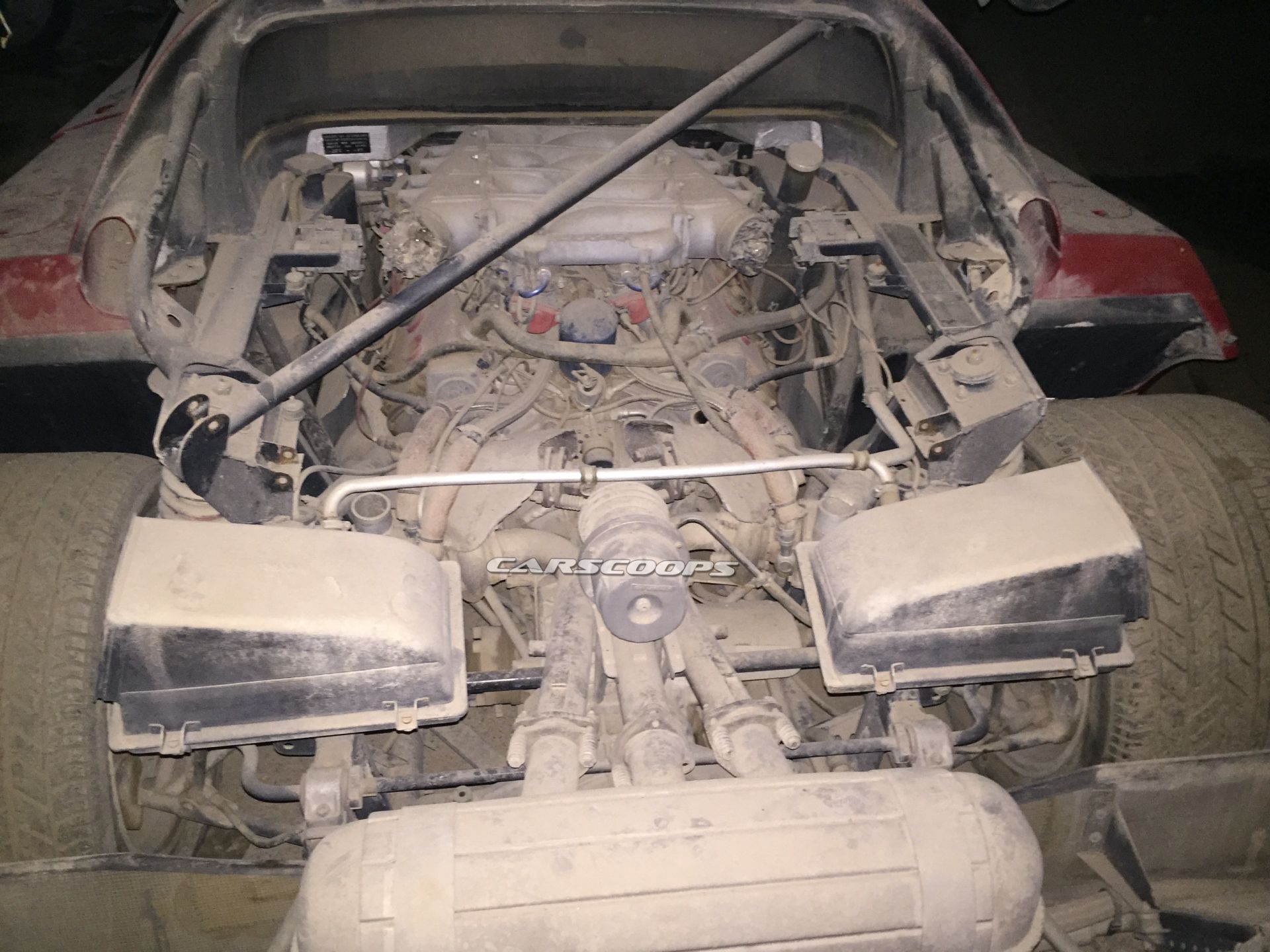 “The gate opens about one meter and they told us to go in, and there it was. Under a large sheet metal roof there were several cars and in the middle stood that Ferrari F40! My first thought huh, God how low and small it looks, the second thought I screamed out loud, ‘help me take the tires off the roof of the car.’ They had put four new tires on the roof of the car,” Mazan says.

Needless to say, he then took lots of photos of the Ferrari F40 which was in a sad state, as you can see in the gallery. Mazan was told that the car had been shipped to Turkey for service a while ago and the people there found out it was previously owned by Uday Hussein. They did not want to give the car back but the owner wouldn’t have that so he went to Turkey and “with resistance, took the car back with a lot of missing parts.”

The saga of the Iraqi Ferrari F40 was far from being over as the supercar continued to spend many years of neglect in the garage. The owner finally decided to fly in an F40 specialist to assess it in view of a full restoration. The mechanic started working on the unlucky Ferrari and finally brought back its shine.

Much like Uday Hussein, the Ferrari F40 is hard to get 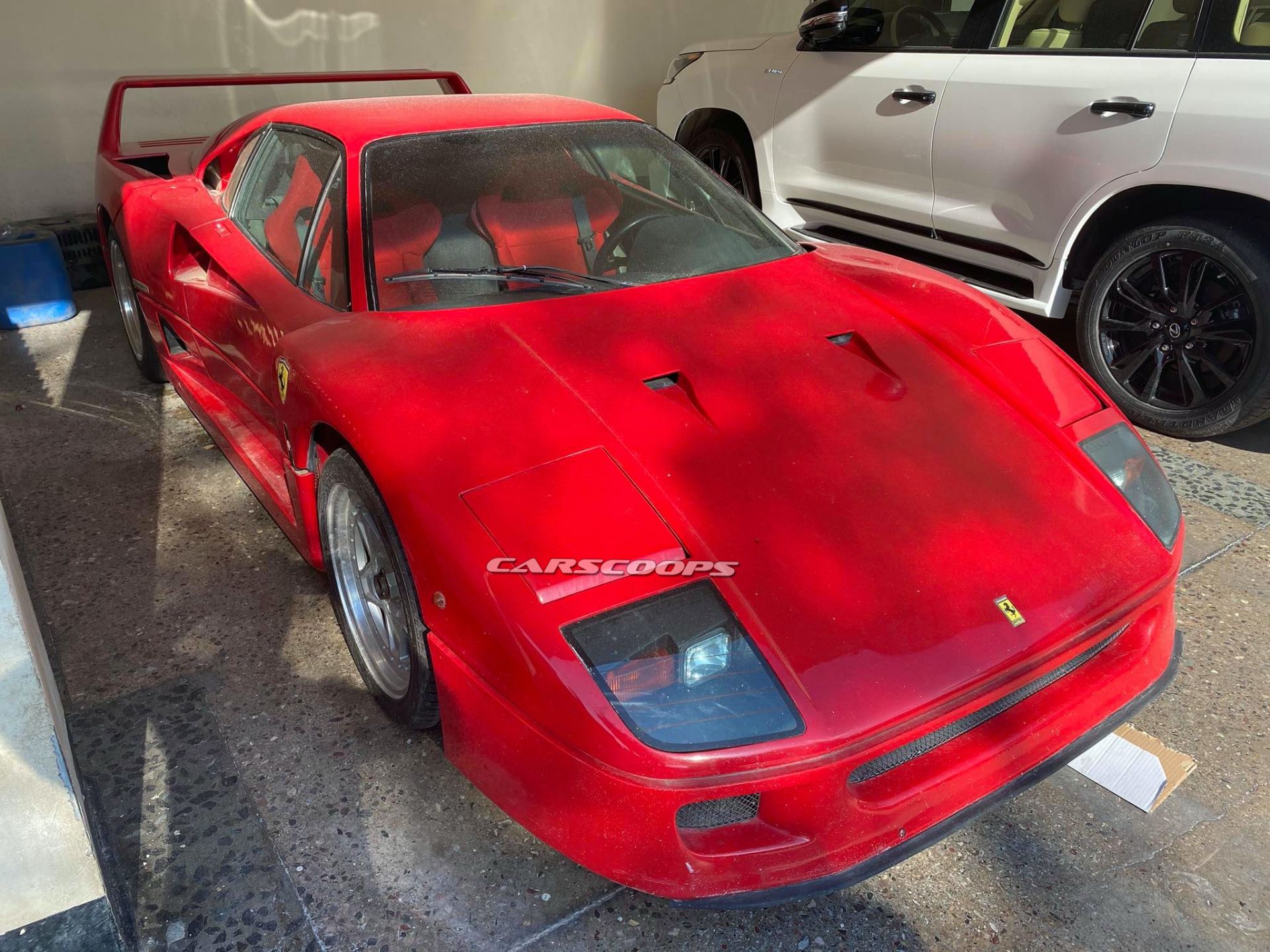 Understandably, Mazan Amin started figuring out ways to buy the F40, which the owner initially agreed to sell for $300,000 in unrestored condition – a bargain compared to what F40s usually change hands for. However, there was a big problem he could not find a solution to: how to legally transport the F40 from Iraq to Sweden given that the owner did not want to be acknowledged as a seller and paperwork was non-existent. Oh, and did we mention he wanted cash?

In the meantime, the car was given a proper restoration and the owner now wants $1.15 million for the F40, as YouTuber Ratarossa found when he contacted the man of mystery from Erbil. In the end, the Ferrari F40 is still with its owner but at least it now looks sensational again so we guess that brings our story as close to a happy end as it gets.