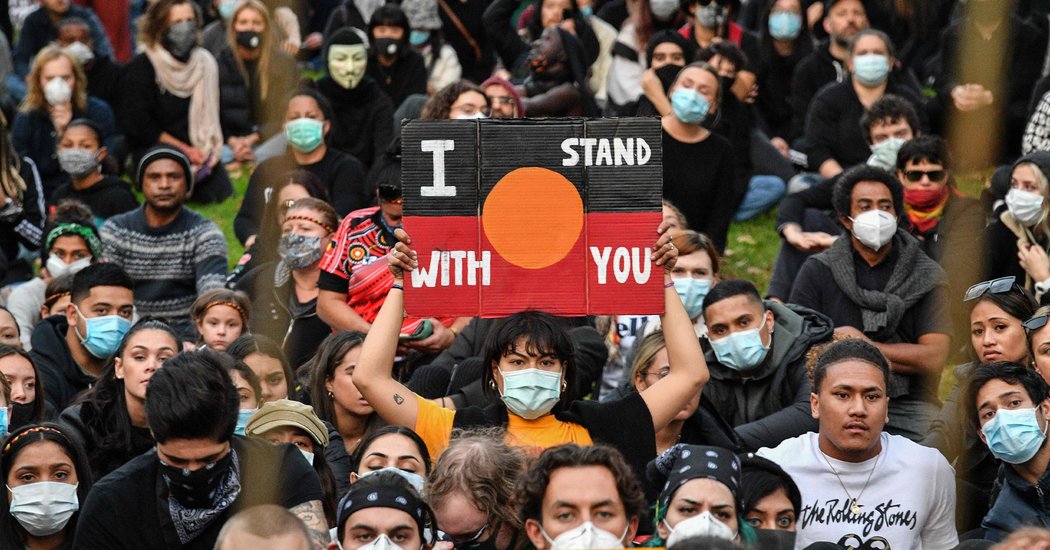 SYDNEY, Australia — Tens of thousands of Australians rallied in support of the Black Lives Matter movement in cities and small towns on Saturday, joining the Americans protesting against the death of an African-American man, George Floyd, while calling for an end to systemic racism in Australia and Aboriginal deaths in police custody.

Despite warnings that they could be fined for defying coronavirus restrictions, protesters showed up wearing masks, holding signs with slogans like “Australia is not innocent” and shouting, “I can’t breathe” — echoing Mr. Floyd’s plea as a white police officer held his knee to his neck in Minneapolis on May 25.

The intensity, scale and scope of the protests seemed to dwarf anything Australia has seen in terms of mobilization around the issue of race since at least 2000, when 250,000 people marched for reconciliation over Australia’s treatment of its Aboriginal people.

Thousands of protesters were expected to gather for anti-racism protests in France and Germany, following marches that drew thousands in Japan and Zimbabwe. Officials in Britain were also bracing for large protests on Saturday afternoon in cities like London, Manchester, Birmingham and elsewhere after a week of demonstrations inspired by the death of Mr. Floyd.

The demonstrations have effectively obliterated adherence to social distancing measures amid the pandemic and raised fears among officials that if the crowds ignored health requirements, it would lead to further spikes in infections.

Many of the global protests were also inspired by the unrest in the United States to call for an end to racism and police brutality in their own countries. In Australia, anger has grown for years over the deaths of Aboriginal Australians in police custody. There have been more than 400 such deaths since 1991, without a single officer having been convicted.

In Sydney, where a last-minute court ruling allowed Saturday’s demonstration to go forward just minutes before it started, anger was mixed with resolve.

“We will not be silenced,” an organizer shouted to the crowd of thousands, as helicopters buzzed overhead. “We will be coming to your streets until you get it right.”

In Melbourne, throngs of masked and gloved protesters lined streets in the central business district. Many of them held Indigenous flags, signs and clap sticks, which they struck in solidarity, chanting the words, “I can’t breathe” — not only of Mr. Floyd’s cry in his final moments, but also that of an Aboriginal man, David Dungay, who died at the hands of the Australian police in 2015.

Police officers surrounded many of the Australian protests but did not engage with the demonstrators, at least initially. In many cases, the protests grew larger than organizers had expected.

In Brisbane, a crowd of thousands gathered and marched through the city, condemning police brutality. In Townsville, in north Queensland, about 1,000 protesters gathered peacefully in a park. In Wagga Wagga, a hub for small farm towns in rural New South Wales, protesters took a knee and observed two minutes of silence.

Sydney’s protest came together under a cloud of tension and uncertainty. Late Friday, as interest in the rally grew, a court ruled that it could not be held, citing the need for social distancing in light of the coronavirus pandemic. That led to an appeal and a higher court’s decision on Saturday to let the demonstration proceed.

Many of the Sydney rally’s supporters suggested that the attempt to cancel Saturday’s event had been an example of racism. They noted that gatherings of mostly white Australians, like farmers’ markets, seemed to have carried on without interruption.

Within minutes of the rally’s start, however, the focus shifted from the process to the grave subject of deaths at the hands of police in Australia and the United States.

“No justice, no peace, no racist police,” the crowd shouted. Crowds then marched through the usually bustling center of the city.

“I’ve never seen so many emotions expressed by so many people in my whole lifetime of protesting,” said Margaret Campbell, 70, an Aboriginal elder whose heritage is Dhanggati, who watched from the steps where organizers spoke.

But she added, “What really matters is what happens when people have to make decisions — how will they vote, how will they keep it up?”

She was wearing a mask and blue latex gloves. Nearby, volunteers filtered through the crowd offering masks and sanitizing wipes. In Melbourne, organizers handed out gloves, hand sanitizer and masks and reminded crowds to observe social distancing as best they could, but the sheer number of people cramming the streets made adequate spacing close to impossible.

Indigenous activists spoke in somber but impassioned tones to the heaving crowd in Melbourne, where protesters held signs with the names and photographs of people who had died in police custody.

“You’re on our land,” said Kaya Nicholson, a 17-year-old Indigenous organizer. She told protesters that while she appreciated their support in this moment of global unrest around race, it was crucial that Australians continue to speak up for Indigenous people.

Ron Baird, an African American living in Australia, drew parallels between Australia’s troubles and the crisis in the United States, disputing Prime Minister Scott Morrison’s suggestion this week that Australians were “importing” problems that had not already existed in the country.

“No Mr. Morrison, Australia is not the United States, but Australia does have its own long, dark, brutal past of oppression,” Mr. Baird said.

In Britain, the health minister, Matt Hancock, cited Covid-19 on Friday in warning protesters not to gather this weekend. “I understand why people are deeply upset, but we are still facing a health crisis and coronavirus remains a real threat,” he said.

His warning came as the infection rate increased in the northwest and southwest of England, health officials said, with the R number rising to 1 or above it.

The Metropolitan Police’s deputy assistant commissioner in London, Laurence Taylor, told the BBC, that because of social distancing rules allowing only six people from different households to gather outdoors, the planned demonstrations across the country were “unlawful.”