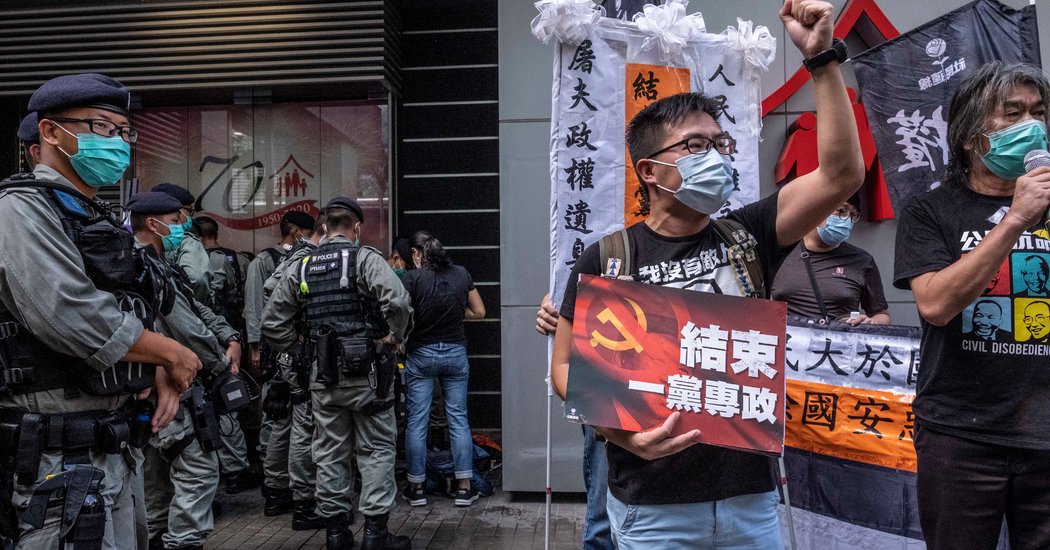 The sweeping new national security law that China imposed on Hong Kong, aimed at stamping out opposition to the ruling Communist Party in the former British colony, is as “devastating” as some critics feared, a human-rights activist said on Wednesday.

Conceived in secrecy and passed on Tuesday without serious public input, the law, which includes 66 articles and more than 7,000 words, sets up a vast security apparatus in Hong Kong and gives Beijing broad powers to crack down on a variety of political crimes, including separatism and collusion.

It is likely to usher in a new era for Hong Kong, experts say, in which civil liberties are tightly constrained and loyalty to the party is paramount. “All in all, this is a takeover of Hong Kong,” said Jerome A. Cohen, a New York University law professor who specializes in the Chinese legal system.

Here’s a guide to the new rules.

The law targets protesters with harsh penalties, including life imprisonment.

The security law takes direct aim at the spirited antigovernment protests that have convulsed Hong Kong over the past year, prescribing harsh penalties for the tactics commonly used by demonstrators.

As they led a monthslong campaign last year to resist what they called Beijing’s encroachment on Hong Kong’s civil liberties, protesters worked to disrupt the city’s reputation for efficiency and orderliness. Some groups attacked police stations, vandalized shops and restaurants and briefly paralyzed the airport.

Under the new law, damaging government buildings would be considered an act of subversion punishable by life imprisonment in “grave” cases. Sabotaging transport would be deemed a terrorist activity punishable by life in prison if it harms other people or causes significant damage to public or private property.

The four major offenses in the law — separatism, subversion, terrorism and collusion with foreign countries — are ambiguously worded and give the authorities extensive power to target activists who criticize the party, activists say.

“The law is devastating in that it appears to have no bounds,” said Sophie Richardson, the China director at Human Rights Watch. “Hong Kong activists, accustomed to operating in mostly rights-respecting environment, now face a frightening void.”

Hong Kong’s residents have long cherished the city’s independent judiciary, a legacy of British colonial rule that stood in stark contrast to the secretive, party-controlled courts in mainland China.

Under the legislation, the central government in Beijing can intervene in national security cases, especially during crises or if a case is deemed “complex.” The law says defendants in important cases could stand trial before courts in mainland China, where convictions are usually assured and penalties are often harsh. Trials involving state secrets could be closed to the news media and the public.

The law could bring to Hong Kong many harsh legal practices common in mainland China, experts said. Broadly, the law says that the rights of suspects and defendants in national security cases should be respected. But apart from a presumption of innocence and the right to defend oneself, it does not offer much clarity on those protections, leaving open the danger that some of the harsh, unaccountable practices common on the mainland could spread to Hong Kong.

“As a national security suspect, you can be locked up for as long as six months incommunicado, subject to torture, coerced confession, no access to counsel or family or friends, before the police decide whether to process you for a crime,” said Mr. Cohen, the law professor, speaking about practices common in mainland China.

The law sends a warning to the U.S. and other countries.

Beijing has repeatedly sought to portray the unrest in Hong Kong as the work of foreign countries, especially the United States, accusing them of taking part in a plot to sow chaos in China and topple the Communist Party. Chinese officials have spread unfounded conspiracy theories suggesting that Western countries are funding and directing the activists.

Several parts of the security legislation take aim at the perceived role of foreigners in political activism in Hong Kong.

The new rules apply even to those who are not residents of Hong Kong, suggesting that foreigners who support independence for Hong Kong or call for imposing sanctions on the Chinese government could be prosecuted upon entering Hong Kong or mainland China.

The law also states that national security officials in Hong Kong will “take necessary measures to strengthen the management” of foreign nongovernmental organizations and news outlets in the territory. And, the legislation does not offer specifics.

The legislation seems to be aimed at silencing criticism of the party’s policies in Hong Kong among rights activists, journalists and government officials outside China, experts said.

“The law’s broad extraterritorial scope could well have a chilling effect on overseas NGOs, limiting their ability to partner with Hong Kong groups on sensitive issues like human rights and political reform,” said Thomas E. Kellogg, executive director of the Center for Asian Law at Georgetown University.

Mr. Kellogg said that more restrictions on nongovernmental groups working on issues like human rights, the rule of law and the democratic development in Hong Kong were likely to emerge in the coming months.

The provisions targeting foreigners will most likely worsen tensions between China and the United States, with relations already at their lowest point in decades. The Trump administration has promised a series of punishments in retaliation for the national security legislation, including visa restrictions and limits on exporting defense technology.

On Tuesday, Secretary of State Mike Pompeo criticized the passage of the legislation, tweeting: “The CCP’s draconian national security law ends free Hong Kong and exposes the Party’s greatest fear: the free will and free thinking of its own people.”

He also said in a statement, “The United States will not stand idly by while China swallows Hong Kong into its authoritarian maw.”