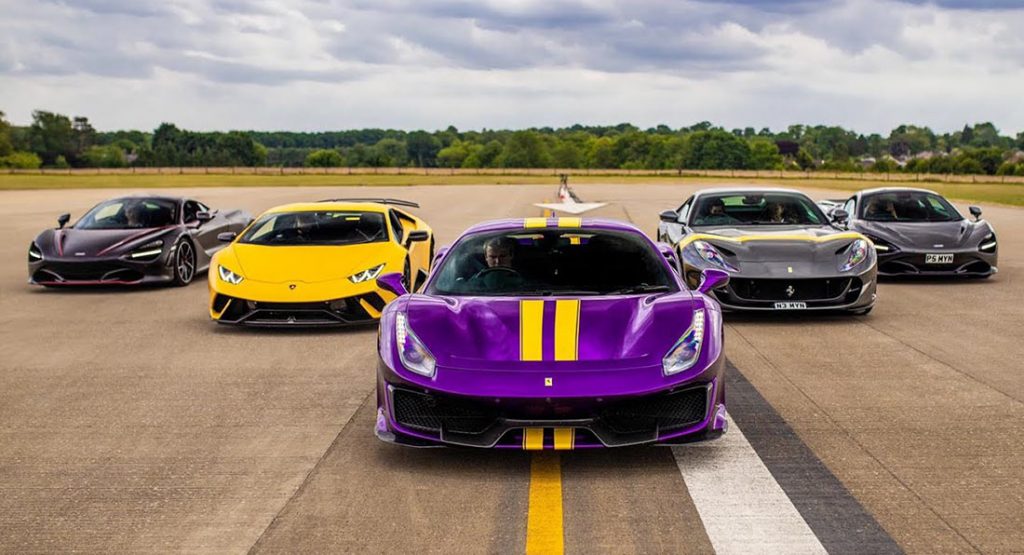 Supercars are getting ever faster and the cars featured in this particular clip all offer truly frightening levels of acceleration. However, which of them is the fastest?

To find out, YouTuber 888MF teamed up with BOTB in the UK for a series of drag races. The cars featured are a pair of McLaren 720S’ (one fitted with an aftermarket exhaust), a Ferrari 488 Pista, a Lamborghini Huracan Performante, and a Ferrari 812 Superfast.

Kicking things off is a race between the Lamborghini and the 488 Pista. Thanks to its all-wheel drive system, the Huracan gets off the line quicker but because it has less power, the Ferrari storms past it before the finish line.

In the second race, the victorious 488 Pista lines up against the 812 Superfast and, despite being one tier lower in Ferrari’s hierarchy, the twin-turbocharged V8 488 out-accelerated the V12-powered grand tourer.

Then it was the turn of the McLarens, which lined up alongside each other and the 488 Pista for a battle of supremacy. During both races, the owner of the 720S with the aftermarket exhaust rocketed off the line much quicker than his rivals and came out the victor.

However, things don’t end there as a surprise competitor then joins the party in the form of a Porsche Taycan Turbo S. The all-electric super saloon has established itself as one of the most accelerative vehicles on the planet and can hit 62 mph (100 km/h) in under 2.5 seconds. The question is, is that enough to upstage the 720S?