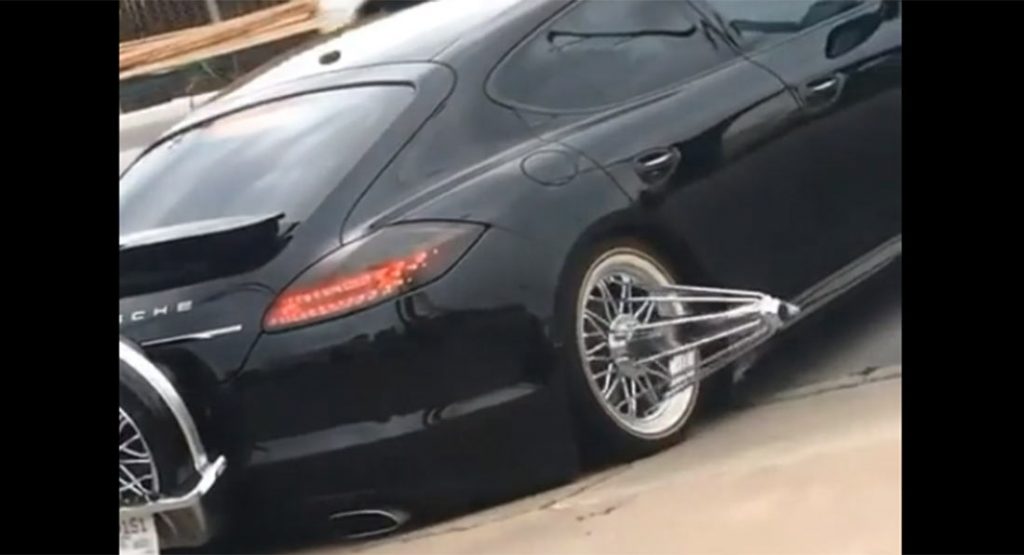 The United States is filled with all kinds of different car communities that each have their own ways of modifying vehicles. The slab culture from Houston, Texas is one of the most ‘intriguing’.

Vehicles from the slab scene are equipped with wire rims that stick out up to a foot from the extremities of the car. This particular Porsche Panamera equipped with these wheels is one of the worst examples we’ve come across.

This video was recently shared on Reddit and shows a black Panamera equipped with wire rims that are among the most ridiculous we’ve seen. Last month, we stumbled across a Bentley Bentayga with similar wheels,but its spikes were only sticking out about 10-inches. The spikes protruding out of the Panamera’s wheels seem to be almost twice as long.

Read Also: Bentley Bentayga With Huge Spikes At Its Wheels Is An Abomination

Adding insult to injury, the Porsche owner has also affixed a spare wheel to the rear fascia of the luxury sports sedan.

Ordinarily, vehicles found in Houston’s slab culture are old Cadillacs and Lincolns, but it seems as though the scene is growing and starting to attract people with far more expensive vehicles.

Perhaps the only saving grace of this particular Porsche is that it is a first-generation Panamera and not the more stylish second-generation model. Speaking of the second-gen Panamera, it was recently refreshed for the 2021 model year with an updated design, a new plug-in hybrid variant and improved performance. Here’s hoping no one bolts on a set of slab culture wheels to the new car.