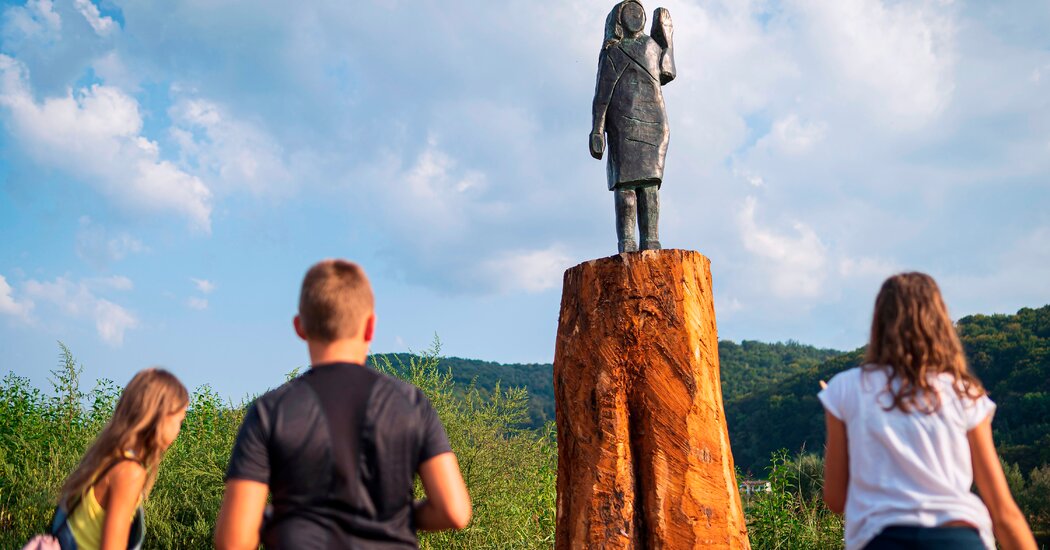 When a wooden statue of Melania Trump was erected near her hometown in Slovenia last year, it was mocked as looking like a Smurfette or a scarecrow. Then it was set on fire.

Now, the artist who commissioned it is back with a new one — and this sculpture, made of bronze, is intended to have a more enduring legacy.

“With the Black Lives Matter protests, there’s been a tendency to rip down monuments, so I wanted to install a permanent one,” the artist, Brad Downey, an American, said in a telephone interview from Slovenia on Wednesday.

Although Mr. Downey said he did not support President Trump or his anti-immigrant policies, the artist said that Mrs. Trump’s origins obliquely contradicted her husband’s views. “We’ve got a president who is against immigration, but his wife is an example of successful immigration,” Mr. Downey said.

The sculpture is one of several tourist draws that have arisen in Sevnica, a town of 5,000 people in eastern Slovenia where Mrs. Trump grew up, in the time since her husband began his 2016 presidential election campaign. Since he became the front-runner, the town has organized Melania-themed tours and sold Melania wine, Melania slippers and Melania salami — and attracted 20,000 visitors a year in the process.

Last year, Mr. Downey commissioned a local folk artist to carve a rustic sculpture of Mrs. Trump out of a tree trunk, depicting the first lady waving her hand and wearing an outfit that evoked the powder-blue cashmere dress she wore at her husband’s inauguration in 2017. The folk artist was born in the same hospital as Mrs. Trump — and around the same time — and Mr. Downey had interviewed him for a film about immigration.

The statue was erected on the banks of the Sava river near Sevnica. But in July, a year after its installation, arsonists set the sculpture on fire, damaging its face.

Mr. Downey had the charred sculpture moved to his temporary studio in Slovenia shortly afterward, and has since exhibited the damaged work in a seaside town near Sevnica.

He said that he had long wanted to make a bronze replica, and that the anti-racism protests in the United States and overseas this year after the police killing of George Floyd had pushed him to do so.

The new sculpture — a life-size, monochrome work created by another Slovenian craftsman and unveiled by Mr. Downey on Tuesday — stands on the same tree trunk as the former one.

An attached plaque dedicates it to “the eternal memory of a monument to Melania which stood at this location.”