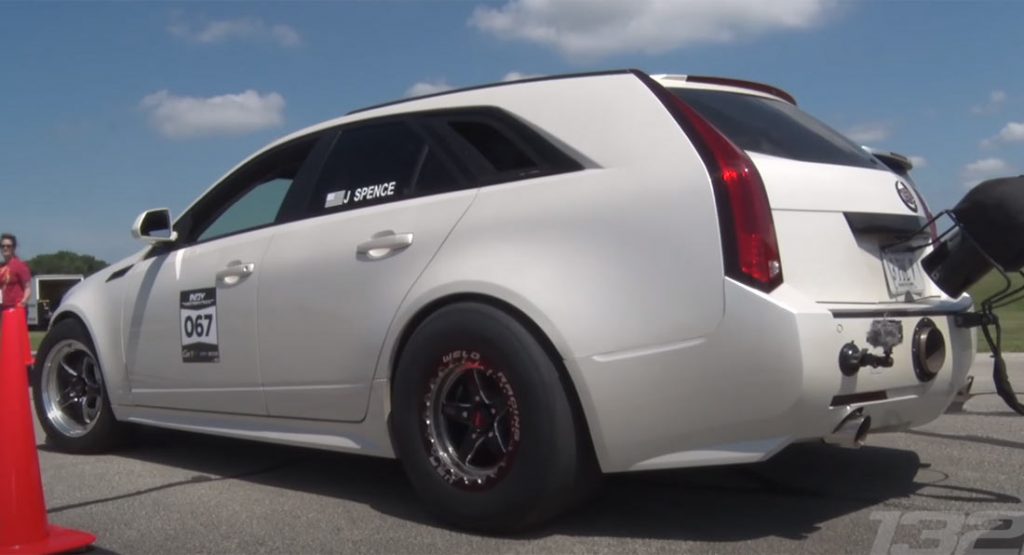 Super estates have a unique appeal to them that few other vehicles on the market can match, and this particular Cadillac CTS-V Wagon is one of the most insane estates you’re ever likely to come across.

When Cadillac was selling the CTS-V Wagon, it was equipped with a supercharged 6.2-liter V8 engine with 556 hp and 551 lb-ft (747 Nm) of torque. However, eager to make this CTS-V unlike any other, the owner had the engine comprehensively modified and a turbocharger mounted. While rocking a supercharger and a turbocharger, the car was pumping out 1,200 hp at the rear wheels.

Watch Also: Dialed Up To 11 – Explore The History Of The Almighty Cadillac CTS-V

Eager to extract even more power, the owner has since decided to remove the supercharger and is now just rocking a single massive turbocharger that’s not actually mounted under the hood but just behind the rear bumper. It is unclear just how much power the car has as it maxed out the dyno it was being tested on. With that being said, the owner estimates upwards of 1,800 hp. Making the car all the more impressive is the fact that it still has the standard six-speed manual transmission.

To get as much grip off the line as possible, it sports a set of massive drag radial tires and can sprint down the half-mile at upwards of 200 mph (320 km/h). And just for safe measure, it’s equipped with a parachute to help it slow down.

While the owner has outfitted the interior with a roll cage and a fuel cell, the car retains its factory rear seats and could (theoretically) still be used to do the school run in relative comfort.