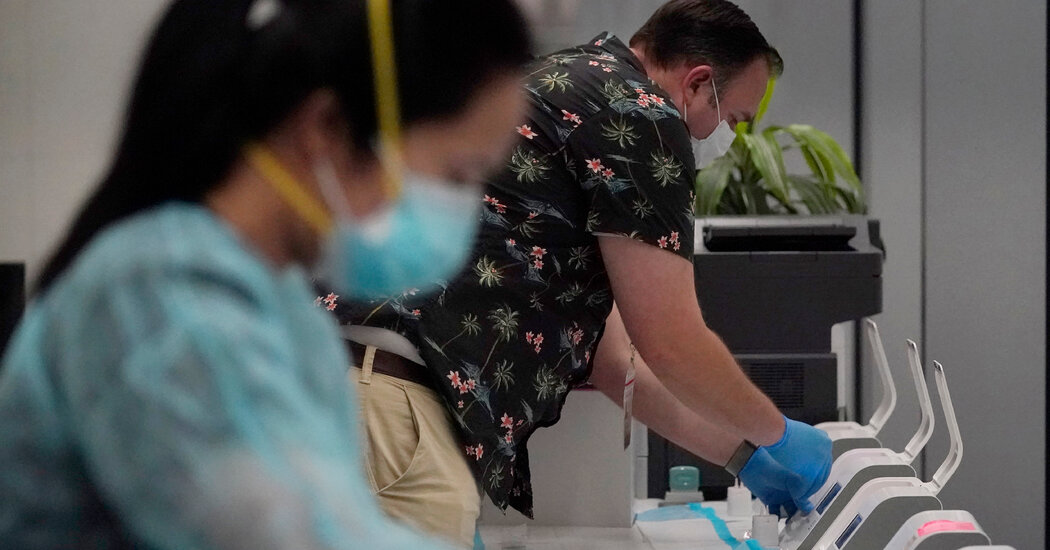 For a month, beginning in November, United Airlines will test passengers over the age of 2 for the coronavirus on select flights from Newark Liberty International Airport to Heathrow Airport in London, in a trial intended to help convince government officials that testing could be a crucial part of reopening international travel.

United will administer the rapid molecular Abbott ID Now virus test to people flying between Nov. 11 and Dec. 11 on Flight 14, departing at 7:15 p.m. on Mondays, Wednesdays and Fridays from Newark. Everyone hoping to be on those flights will have to test negative for the coronavirus to board the plane. Those who test positive will be isolated and asked to get in touch with their health care provider, and the airline will help them book a flight for a later date. People who do not want to take the test will be moved to another flight.

“We believe the ability to provide fast, same-day Covid-19 testing will play a vital role in safely reopening travel around the world and navigating quarantines and travel restrictions, particularly to key international destinations like London,” said Toby Enqvist, chief customer officer for United. In September, international air arrivals to New York’s five regional airports were down 82 percent compared with September 2019, according to data from the Port Authority of New York and New Jersey.

People on the flights will have to make appointments to get tested, and the airline is advising them to plan to arrive at least three hours before a flight. The testing site at Newark will be in the United Club near Gate C93.

The pilot program is intended to make passengers feel comfortable traveling again, but it won’t replace practices like mask wearing, social distancing and protocols for boarding and deplaning that have become mandatory in recent months. Passengers will still have to follow quarantine rules when they arrive in London.

The test comes on the heels of United and other airlines offering coronavirus testing to people traveling from mainland states to Hawaii, where those with a negative test can skip the state’s 14-day quarantine. Travel industry experts believe that testing will make it possible for people to bypass quarantines and make it easier for international travel to begin again, and United’s leadership team hopes that the trial will lead to more testing at airports.

On Thursday in New York City, Mayor Bill de Blasio again cautioned residents against holiday travel, noting particular concern on Thursday about gatherings over the upcoming Halloween weekend. He reported that the citywide seven-day average rate of positive test results was 1.92 percent, “the first time that number has taken a meaningful jump.”

“That alone is not a number that would overwhelm us but the growth is what worries me,” the mayor said.

Dr. Jay Varma, a senior health adviser, also noted a “steady rise” in positive test results across the five boroughs. “The rise has been relatively slow but it hasn’t abated and that’s really what are concern is right now,” he said.