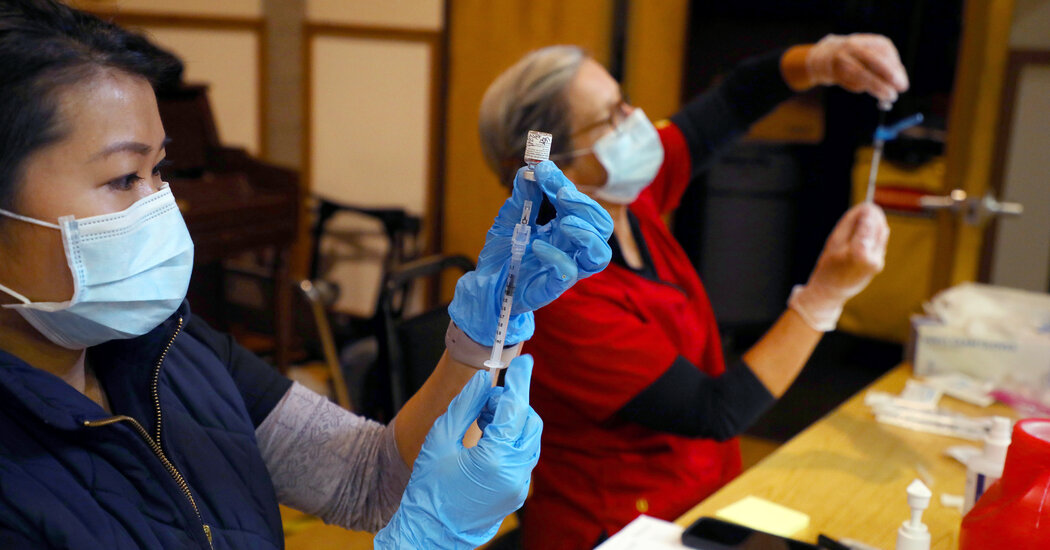 The Food and Drug Administration said on Monday that vaccine developers would not need to conduct lengthy randomized controlled trials for vaccines that have been adapted to protect against concerning coronavirus variants.

The recommendations, which call for small trials more like those required for annual flu vaccines, would greatly accelerate the review process at a time when scientists are increasingly anxious about how the variants might slow or reverse progress made against the virus.

The guidance was part of a slate of new documents the agency released on Monday, including others addressing how antibody treatments and diagnostic tests might need to be retooled to respond to the virus variants.

Together, they amounted to the federal government’s most detailed acknowledgment of the threat the variants pose to existing vaccines, treatments and tests for the coronavirus, and came weeks after the F.D.A.’s acting commissioner, Dr. Janet Woodcock, said the agency was developing a plan.

“The emergence of the virus variants raises new concerns about the performance of these products,” Dr. Woodcock said in a statement Monday. “We want the American public to know that we are using every tool in our toolbox to fight this pandemic, including pivoting as the virus adapts.”

Most of the vaccine manufacturers with authorized vaccines or candidates in late-stage trials have already announced plans to adjust their products to address the vaccine variants. The Moderna and Pfizer-BioNTech vaccines use mRNA technology that the companies have said can be used to alter the existing vaccines within six weeks, although testing and manufacturing would take longer.

Moderna has already begun developing a new version of its vaccine that could be used as a booster shot against a virus variant that originated in South Africa, known as B.1.351, which seems to dampen the effectiveness of the existing vaccines.

A fast-spreading coronavirus variant first observed in Britain has also gained a worrisome mutation that could make it harder to control with vaccines. That variant with the mutation was found in the United States last week.

Still, the guidance did not appear to be written with the assumption that new vaccines were imminent, or would be needed at all. Despite the recent indications that some variants — and particularly B.1.351 — make the currently authorized vaccines less effective, the shots still offer protection and appear to greatly reduce the severity of the disease, preventing hospitalizations and death.

Asked at a news briefing on Monday afternoon how much the variants would need to spread before updated vaccines were necessary, Dr. Woodcock did not give any specific criteria. “We need to anticipate this and work on it so that we have something in our back pocket before the threshold is upon us,” she said.

An updated Covid-19 vaccine can skip the monthslong process of a randomized clinical trial that would compare it with a placebo, the agency said. But a tweaked vaccine will still need to go undergo some testing. In trials proposed by the F.D.A., researchers will draw blood from a relatively small group of volunteers who have been given the adapted vaccine. Scientists will then observe what percentage of volunteers’ samples produce an immune response to the variants in the lab, and how large that response is. The vaccines will be judged acceptable if they produce an immune response that is relatively close to the one prompted by the original vaccines.

Dr. Peter Marks, the top vaccine regulator at the F.D.A., said at the news briefing that studies would include a “few hundred” people and last several months.

Volunteers will also be monitored carefully for side effects. The agency said the testing could be done in a single age group and then extrapolated to other age groups.

The guidance also encouraged the use of animal studies to support the case for modified vaccines, in case immune response studies come up with ambiguous conclusions.

The F.D.A. acknowledged that many questions remained unanswered, such as what type of data would trigger the need for an adapted vaccine and who would make that decision. The agency also noted that scientists had not yet determined the minimum level of antibodies in a vaccinated person’s blood that would protect someone from the virus.

Some other vaccines are regularly updated in a similar way. Because the influenza virus evolves rapidly from one year to the next, vaccine developers have to come up with new recipes annually.

The newly tweaked Covid-19 vaccines would be authorized under an amendment to the emergency authorization granted to the original vaccine, regulators said.