Kia has taken the wraps off the North American replacement for the Sedona: the 2022 Carnival. Kia has been careful not to call it a minivan and, although its shame hasn’t kept it from designing a proper people mover, the brand has at least tried to give it some crossover bona fides.

To start with, it comes standard (exclusively, even) with a 3.5-liter V6 GDI engine making 290 hp and 262 lb-ft of torque. It returns 22 MPG combined, 19 city and 26 highway, per the EPA. That power puts it at the upper end of the minivan spectrum, but it’s a number that wasn’t just chosen for spec-sheet comparisons.

How Much Like A Crossover Can A Minivan Be?

That power means that the Carnival can tow up to 3,500 lbs. That’s a towing milestone that will allow owners to haul a range of small trailers designed to weigh in at just less than that.

It’s also a figure that puts the Carnival up at the high end of the minivan spectrum. More impressively, though, it’s a figure that means it can tow more than some V6 Chevrolet Colorado pickups.

That Kia is trying to call the Carnival anything but a minivan, kind of makes sense. Unfortunately, Kia is not offering AWD, a decision that will make read more like a minivan (though many offer AWD) than a crossover or SUV. But there is more to it than just the beefy engine. 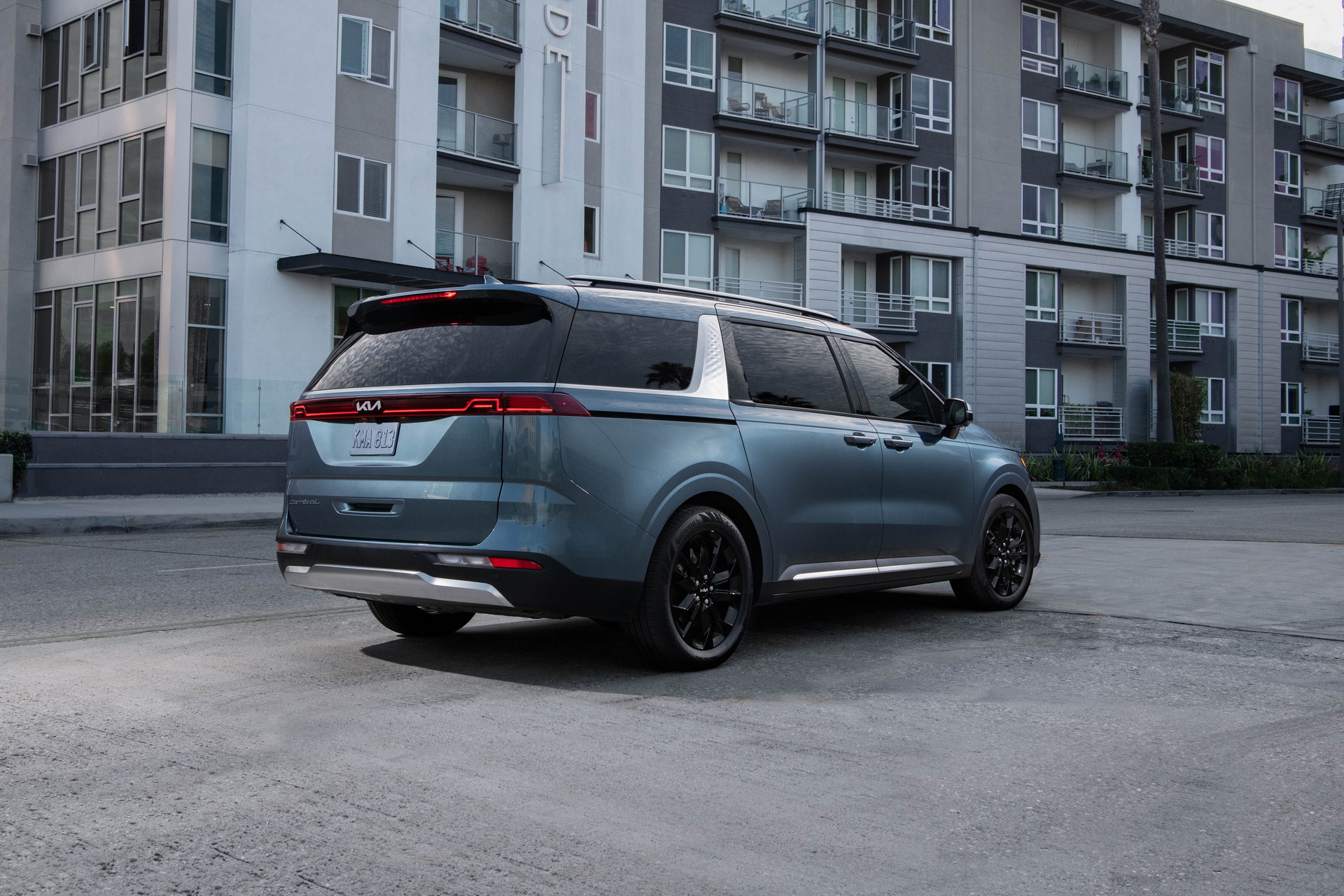 “With its SUV-like character, our new multi-purpose vehicle delivers a combination of premium design, intelligent packaging, and an abundance of innovation in safety and technology,” said Sean Yoon, CEO of Kia Motors North America. “For these reasons, the Carnival is the first vehicle to proudly wear our all-new Kia badge and is a bold signal of things to come.”

Indeed, Kia has designed the Carnival to look mean and muscular. Not only will it be the first North American vehicle to wear the brand’s new, simplified logo, it was designed by the same team that was behind the critically acclaimed Telluride.

With its optional 19-inch wheels (17s standard), its straight lines, and its proud grille, the Carnival certainly doesn’t look like the jawless minivans of old. Fortunately, Kia hasn’t forgotten what matters when designing a minivan: passengers.

It’s Not Always About The Driver

Although it has seating for up to eight, you’re likely to be tempted by the seven-seat option. That’s because it can be selected with VIP Lounge Seating. This offers power controls, wing-out headrests, leg extensions, and ventilated seats to second-row passengers. It’s enough to make a Bentayga owner jealous. 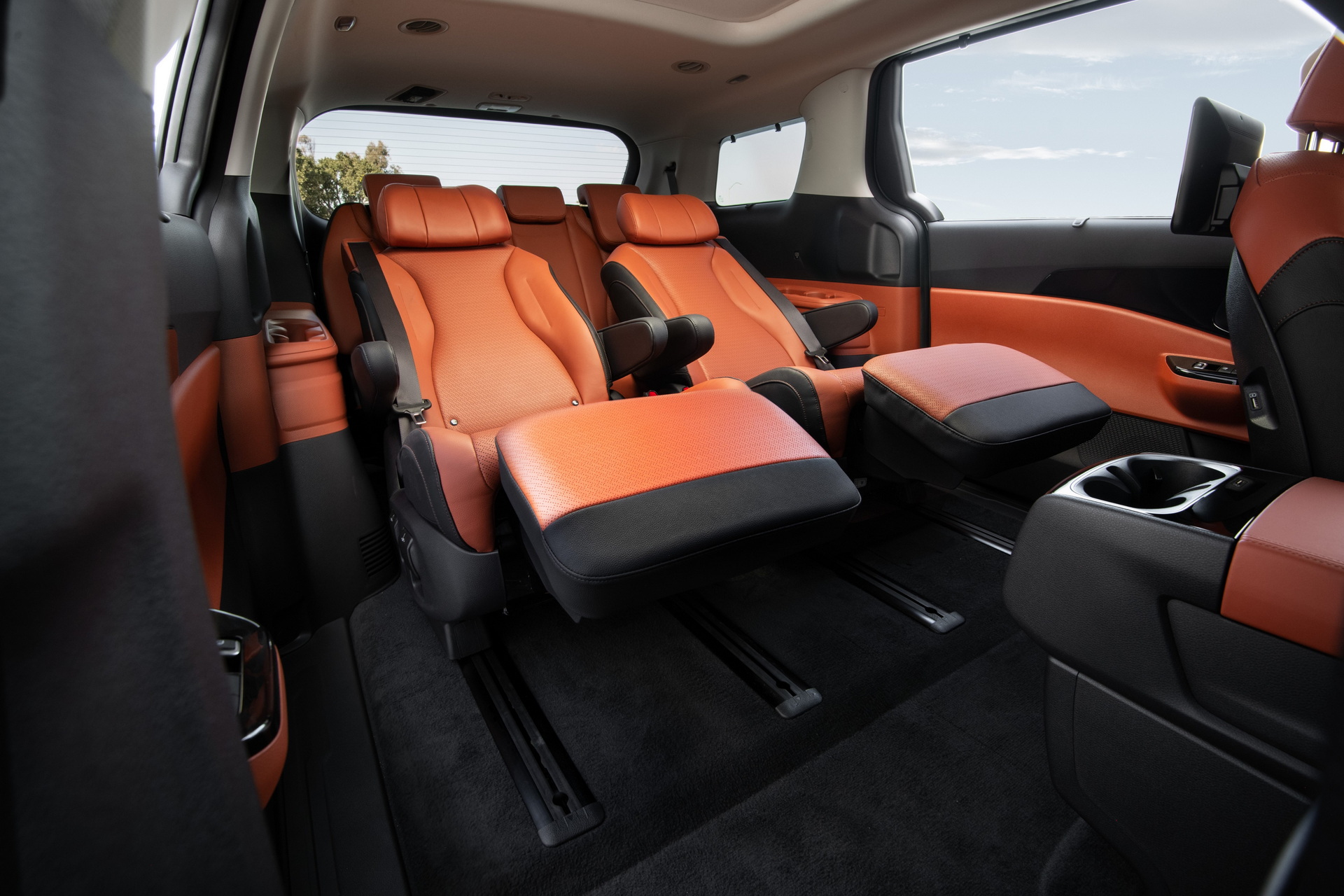 If they’re so relaxed they can’t even bring themselves to sit up, those passengers can also interact with the infotainment system via voice controls. Bose premium sound, meanwhile, will ensure that tinny sounds with too much timbre don’t insult their ears.

It’s not all about luxury, though. Kia has thought about peace of mind, too. For nervous parents, the eight-passenger versions allow the second-row seats to slide far enough forward for the middle-seat (loaded with a baby seat) to be reached by the front-row passengers.

A Carnival Of High Tech Features

There’s also higher-tech, too. For those same nervous parents (albeit later in life) there’s the passenger talk intercom system as well as rear-seat monitoring that even has a night vision camera so that you can keep an eye on your kids and prepare them for the surveillance state, even in the dark. For the less nervous parent, there are also dual screens available in the second row. 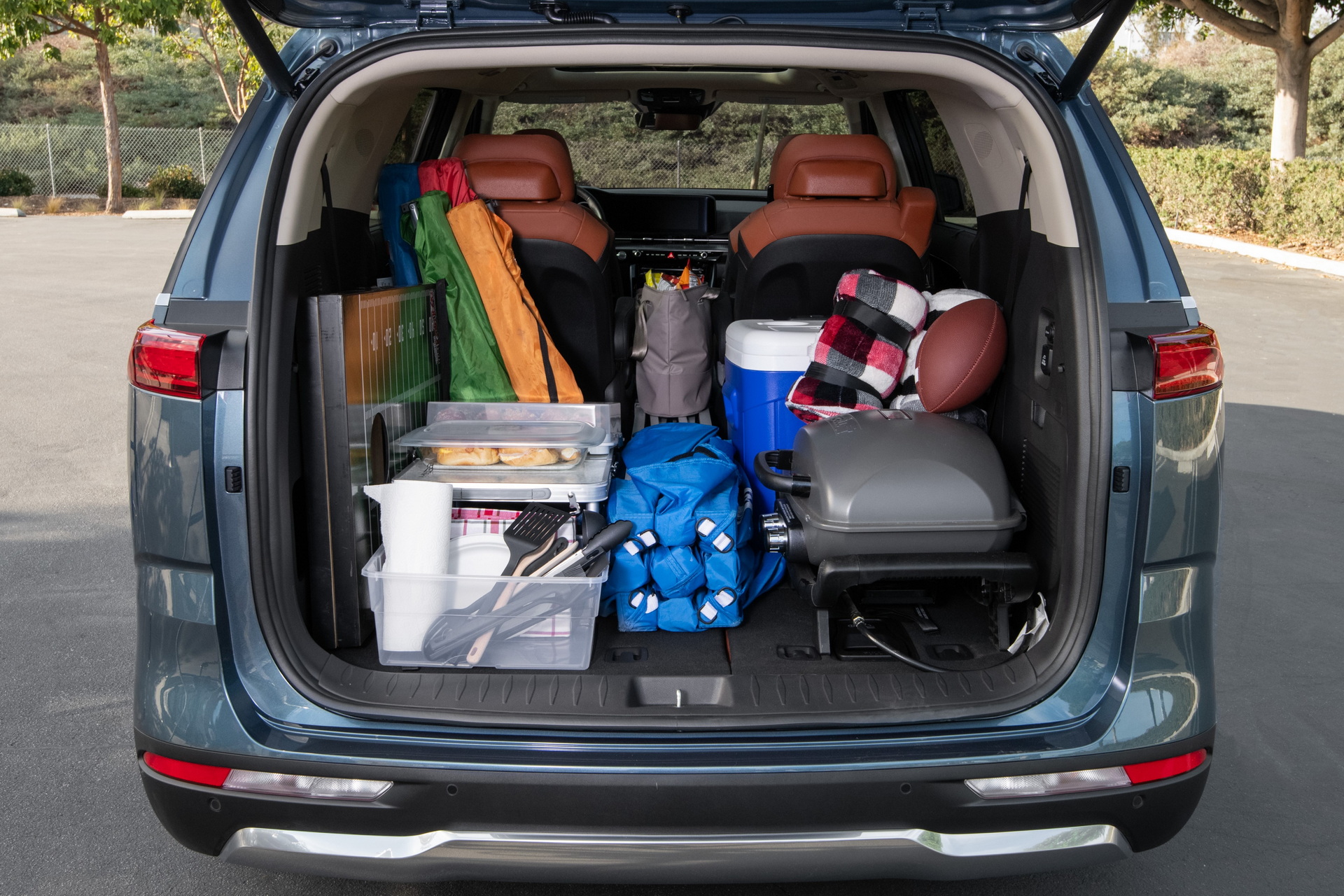 Speaking of the second row, it can be removed from the Carnival altogether while the third row folds into the floor. With all of those seats out of the way, the minivan has best-in-class cargo room of 145.1 cubic feet behind the front seats. With them up, it has best-in-class passenger room of 168.2 cubic feet.

The tailgate can also open without the use of your hands if they’re full of stuff that you’re about to fill that cargo area with, as can the rear passenger doors. If they’re opening to allow people out, the Carnival can deliver a warning if it detects a vehicle coming alongside it.

Speaking of warnings, the horn will sound if the Carnival detects a passenger was left in the vehicle. The rear occupant alert uses ultrasonic sensors to detect movement from kids or pets so that you don’t forget them in the car, which is a real and deeply unfortunate problem.

But returning to happier technology, there are nine USB ports throughout the vehicle. There are also 110-volt outlets and you can connect multiple Bluetooth devices to the vehicle. That’s handy for drivers who want to keep their phone hooked up for hands-free driving, but allow someone else to pick the music.

It Is Sometimes About The Driver, Though 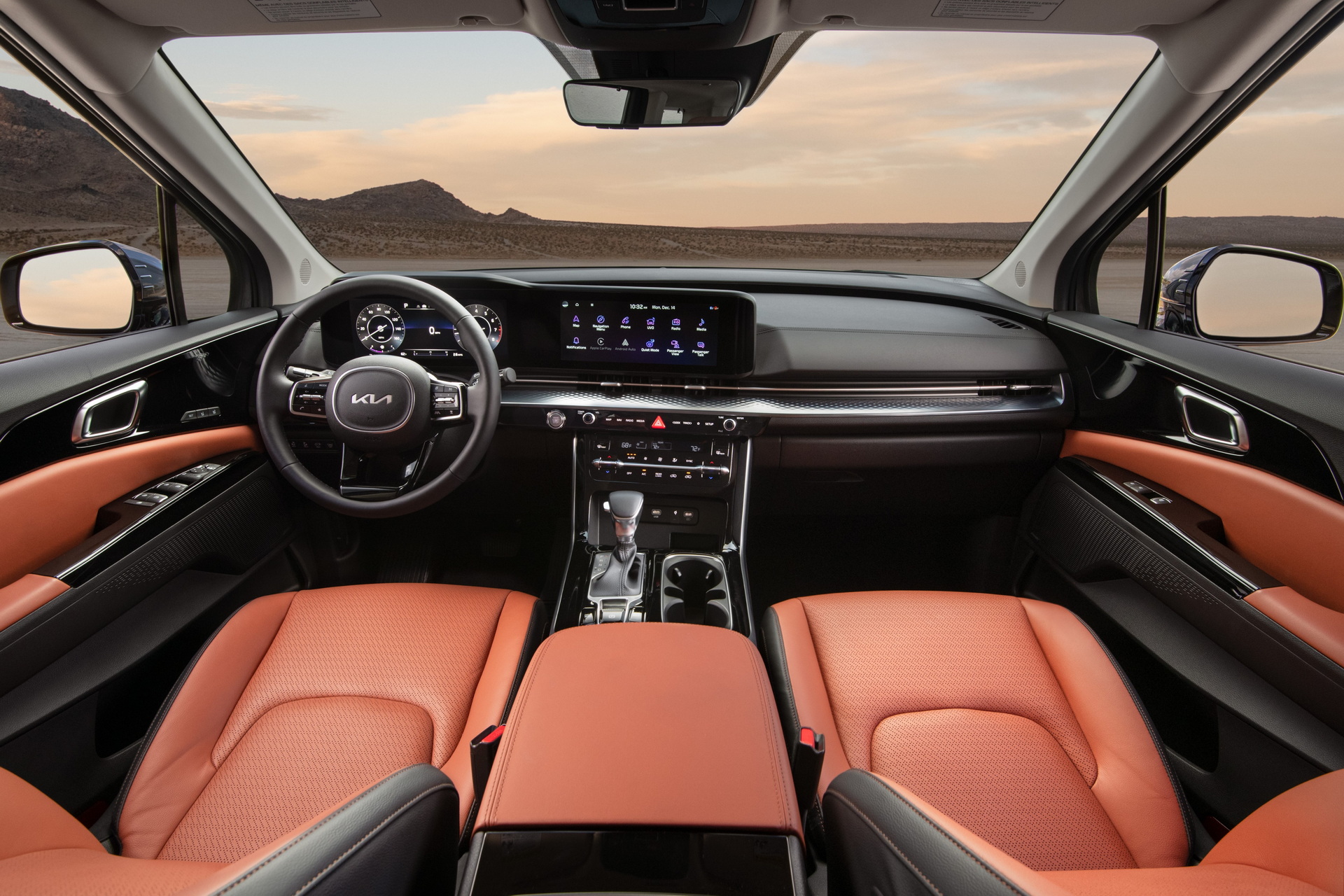 That driver is also given a 12.3-inch digital instrument cluster as well as a 12.3-inch infotainment screen. The latter screen can be synced up to your Google calendar and can, in certain cases, use that information to navigate you to your destination. Once there, it can also give you up to one mile of walking directions after you’ve parked.

For the drive there, meanwhile, you’ll be cosseted by a standard suite of advanced driver aids. These include automatic braking in case of an accident, lane keep assist, blind-spot avoidance tech that will try to pull you out of a bad lane change maneuver, parking sensors, high beam assist, and driver attention warning.

Unfortunately, the price has not yet been announced for the Kia Carnival. Be it a multi-purpose vehicle (or MPV for short, an acronym Europeans have been using on what we call minivans for ages), an SUV-customer-stealer, or a minivan, it will be available for sale this spring.