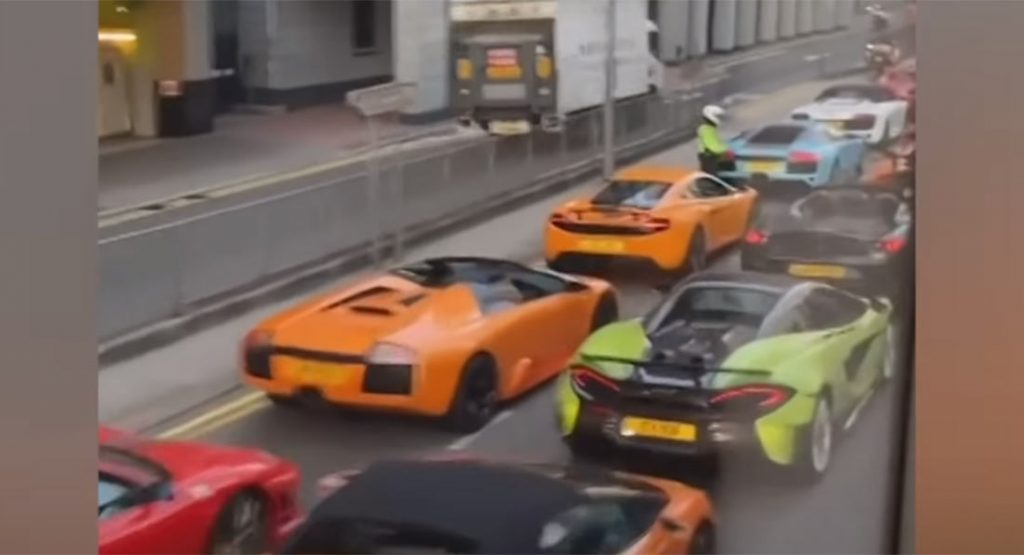 A group of 45 supercars were stopped by police in Hong Kong over the weekend, making for a rather astonishing sight for bystanders.

Authorities launched their operation at 7am on Sunday morning and pulled over the vehicles shortly after they were seen driving westbound at high speeds along the Island Eastern Corridor expressway. Police had to close two lanes of traffic to pull over each and every car within the group.

Eastern district councilor Derek Ngai Chi-ho told the South China Morning Post that residents living near the expressway had complained of noise “believed to have been caused by racing cars.”

“It had been going on for some time, and was especially more serious after midnight or in the small hours during weekends or holidays. The problem was raised in district council meetings too,” Ngai said.

The group of supercars consisted primarily of various Lamborghini, Porsche and Ferrari models but also included a handful of Nissan GT-Rs, McLarens, and one Mercedes-AMG GT S. Among the cars pulled over included a Lamborghini Murcielago SV, an Aventador SV painted Verde Ithaca, and two Aventador SVJs.

Local media reports that one of the Nissan GT-Rs was towed away after suspicions were raised that it had been illegally modified. Police issued defective vehicle orders to nine other cars requiring them to undergo inspections before being allowed back on the roads.

Reports made to police in Hong Kong about illegal street races jumped by 40 per cent to 139 in the first 11 months of 2020 compared to the 99 reports made throughout the entirety of 2019. Police also issued 3 per cent more tickets for speeding offenses in Jan-Nov 2020 than in 2019.