The electric vehicle revolution is right around the corner as a slew of new models are on the horizon and an increasing number of brands are announcing plans to go EV-only.

While Tesla is often credited with pushing the world to embrace EVs, GM is an electric vehicle pioneer. The EV1 was decades ahead of its time and was followed by the Bolt in 2016. The latter has been a modest success as the company has sold over 100,000 units globally and roughly 75% of buyers are first time GM customers. That’s nothing to sneeze at, but the Bolt is a hatchback and Americans won’t give up their crossovers until you pry them from their cold, dead hands.

Chevrolet is addressing this issue with the all-new Bolt EUV. Essentially an extended and crossover-ifed version of the 2022 Bolt, the Bolt EUV aims to appeal to a wider audience. 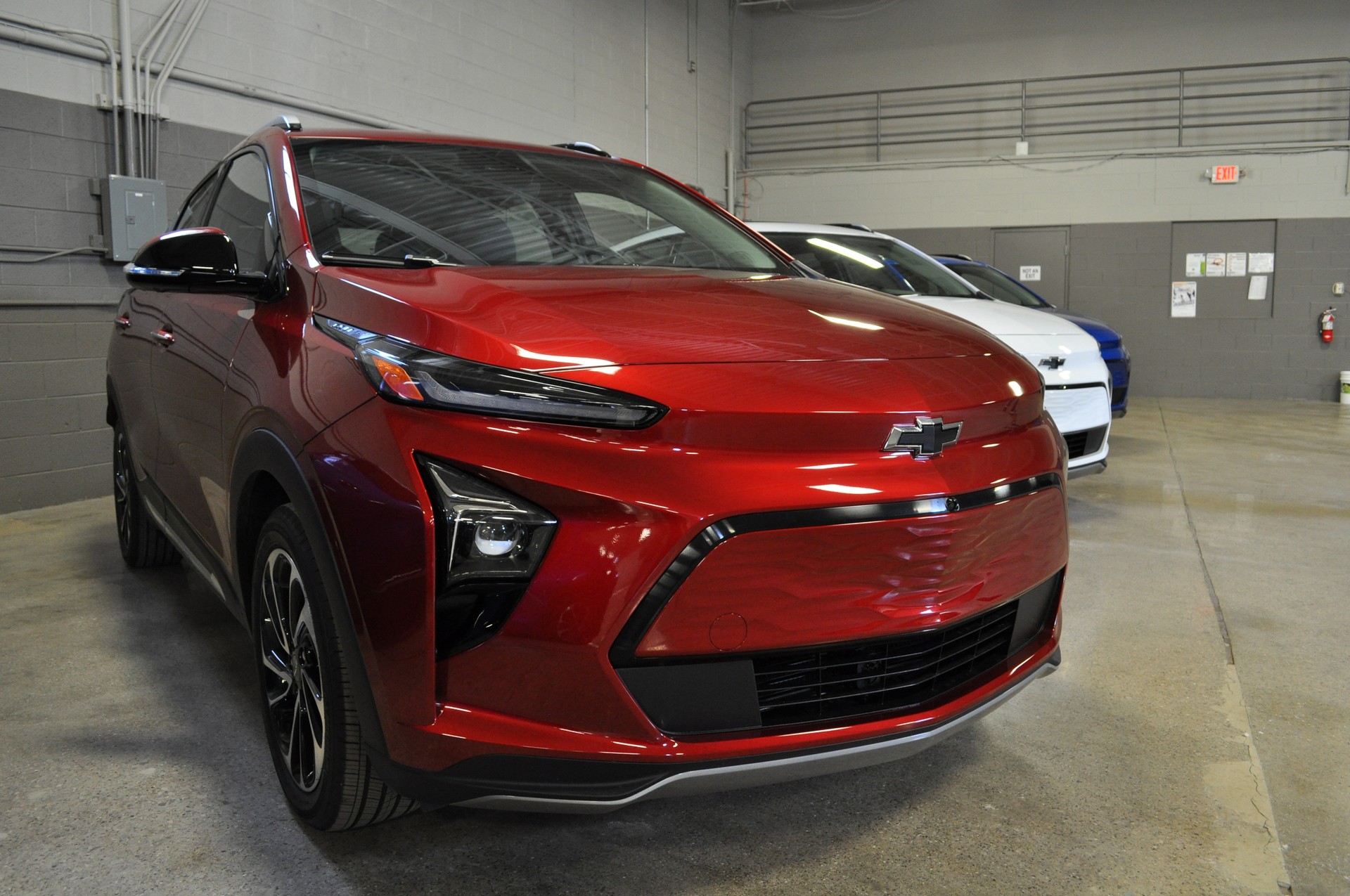 While the 2022 Bolt and Bolt EUV have similar styling, no body panels are shared between the two and the EUV looks a bit more rugged than the regular hatch.

Among the crossover-inspired styling cues are plastic body cladding, roof rails and a silver front skid plate. They’re joined by a unique front fascia, which features an enclosed grille that is flanked by standard LED headlights. The latter reside beneath high-eye daytime running lights that double as sequential turn signals.

Continuing down the sides, the Bolt EUV is distinguished by a higher beltline and a unique greenhouse. Both help the model to look more crossover-like, but the 17-inch aluminum wheels betray that message.

The same can’t be said about the rear end as there’s a black rear bumper with a faux skid plate that echoes the one up front. Designers also gave the model slender taillights, a sporty spoiler and black bow tie badges.

Styling aside, the Bolt EUV is 6.3 inches (160 mm) longer than the standard model and features a wheelbase that has been stretched by 2.9 inches (74 mm). The other dimensions are virtually unchanged as the crossover is a mere 0.2 inches (5 mm) wider and taller than the hatchback.

A Modern And Spacious Interior 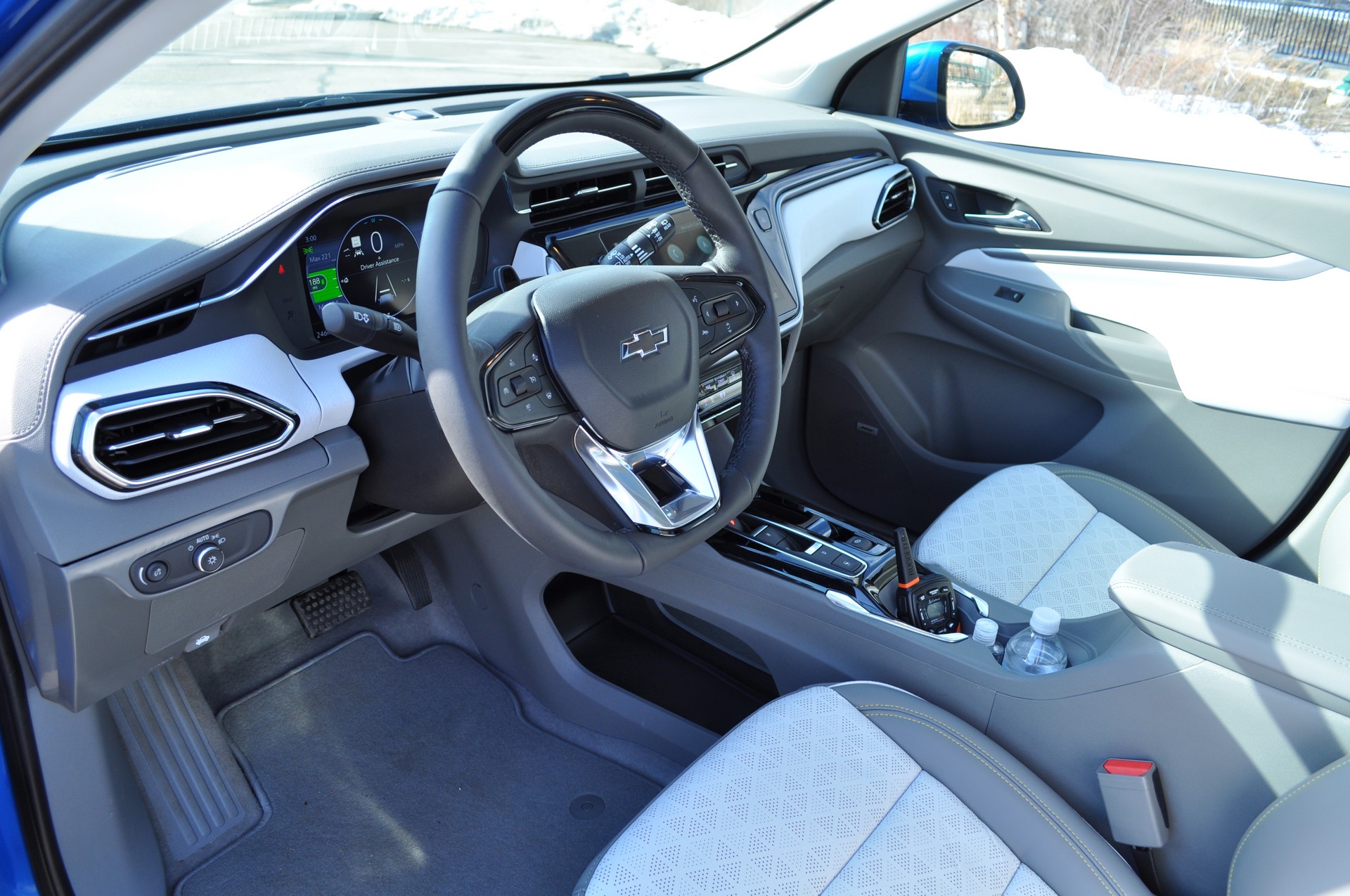 Chevrolet has a tendency to put quirky interiors in their eco-friendly vehicles, and the original Bolt was no exception, as it was equipped with an odd center console and a dashboard with a chin.

Thankfully, they’re not found in the 2022 Bolt and Bolt EUV as both have a modern and stylish interior. Instead, there’s a more traditional dash sporting gloss black trim and metallic accents as well as an upgraded 8-inch digital instrument cluster. Other highlights include a 10.2-inch infotainment system, high quality switchgear and a new floating center console. The models also adopt an intuitive push-button shifter which helps to make the cabin feel more spacious.

One of the key interior highlights are the redesigned seats which feature an upscale triangular geometric pattern and contrast stitching and look particularly good when wrapped in two-tone Dark Ash Gray and Sky Cool Gray leather. The two-tone design is also echoed on the dashboard and door panels, and this helps to make the Bolt EUV feel more premium than it is. Furthermore, the front seats offer heating and ventilation while heating is also available for rear outboard seats.

However, there are plenty of hard plastics to bring you back down to reality. While this isn’t too surprising given the price, some of them are located at common touchpoints such as the door pull. 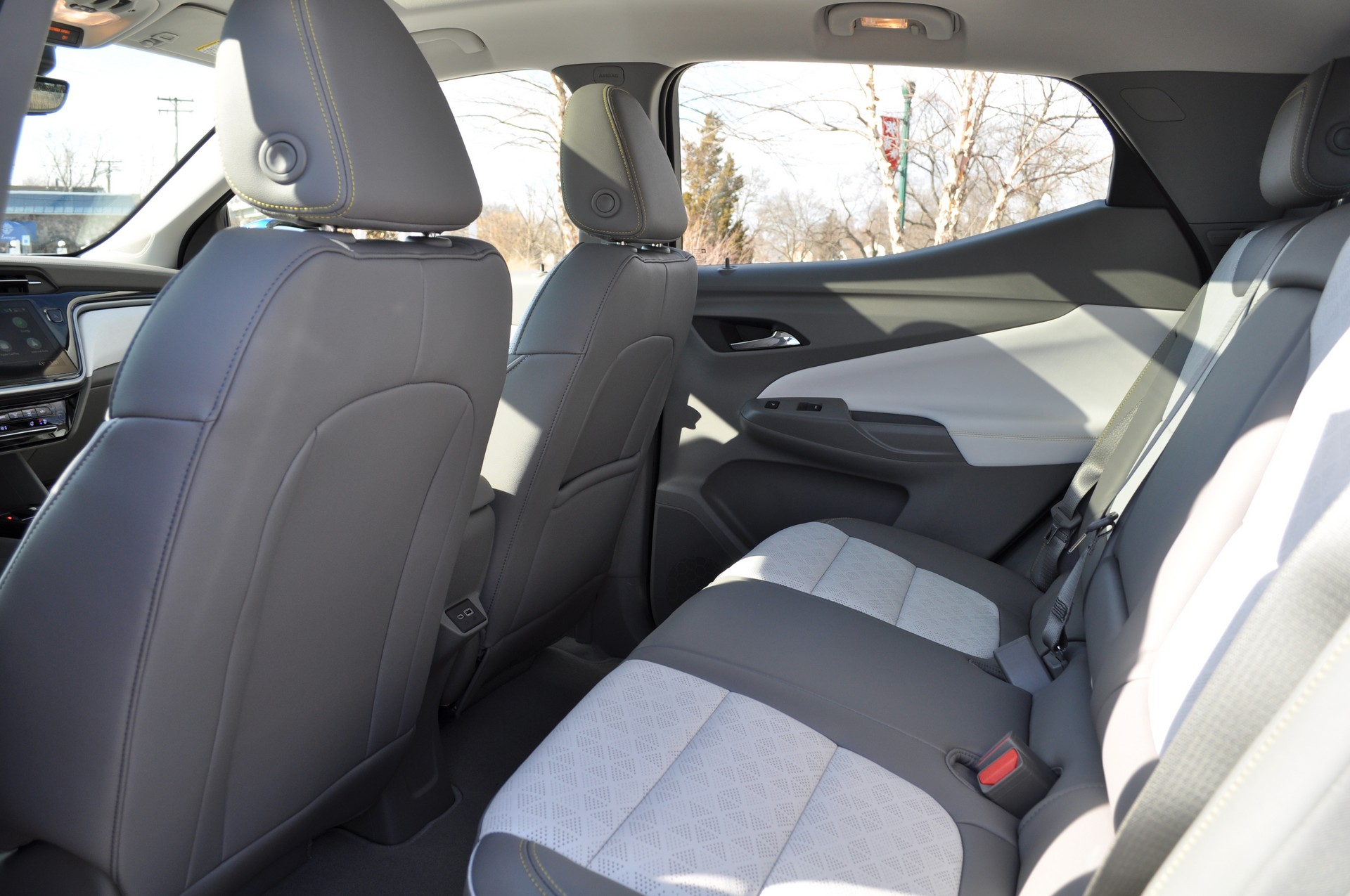 On the bright side, the Bolt EUV’s extended wheelbase helps to create a more accommodating cabin. Rear seat passengers have 39.1 inches (993 mm) of rear seat legroom, which is a sizable jump from the 36.0 inches (914 mm) found in the standard Bolt.

Thanks to the extra room, this 6’ 2” reviewer could easily fit in back even with the front seat adjusted. That being said, headroom can be a bit tight for taller folks and the backrest felt a bit on the firm side.

Speaking of space, the Bolt EUV has slightly less cargo room than the standard Bolt despite its increased dimensions. This is somewhat perplexing, but there’s 16.3 cubic feet (462 liters) of room behind the second row and 56.9 cubic feet (1,611 liters) overall. 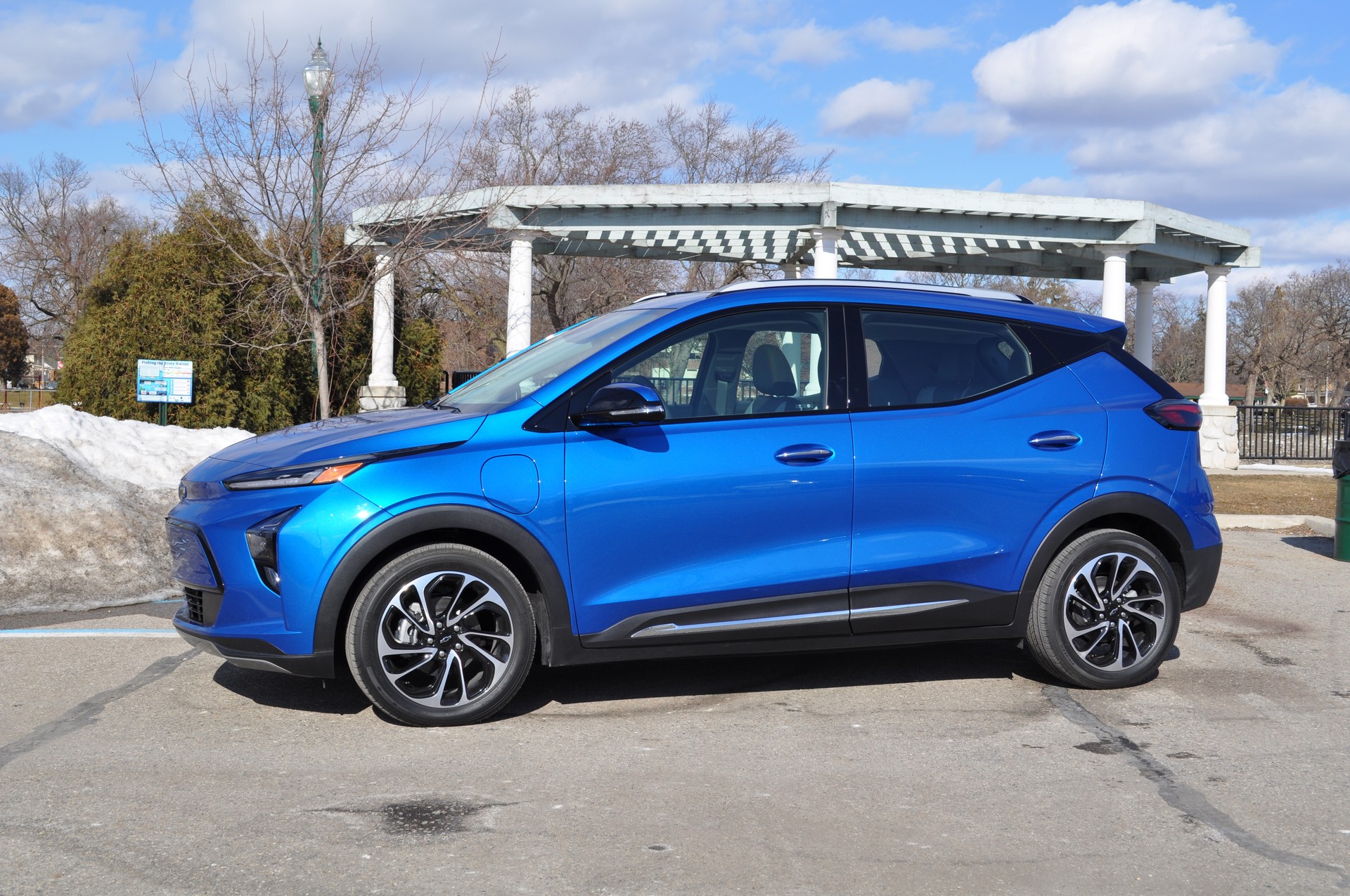 The Bolt EUV rides on the same platform that underpins the Bolt, so it comes as little surprise that it drives like a hatchback. While we only got to spend a couple of hours with a pre-production model, the steering felt nicely weighted and the crossover seemed relatively nimble. That being said, the model’s turning circle is 3.5 feet (1.1 meters) larger than the hatch at 38.3 feet (11.7 meters).

Ride quality seems promising as well as our short, highway-focused trip was comfortable and drama free. The lack of an engine also makes the car pretty quiet as all you’ll hear is a bit of wind and tire noise.

Of course, it’s worth noting that like the Kia Niro EV, the Bolt EUV is front-wheel drive only. This could limit the model’s appeal, but chief engineer Jesse Ortega told us all-wheel drive was eschewed for cost and complexity reasons. It’s also worth mentioning the model rides on the BEV2 platform and GM is putting the finishing touches on the all-new Ultium platform, which will underpin dozens of EVs going forward. 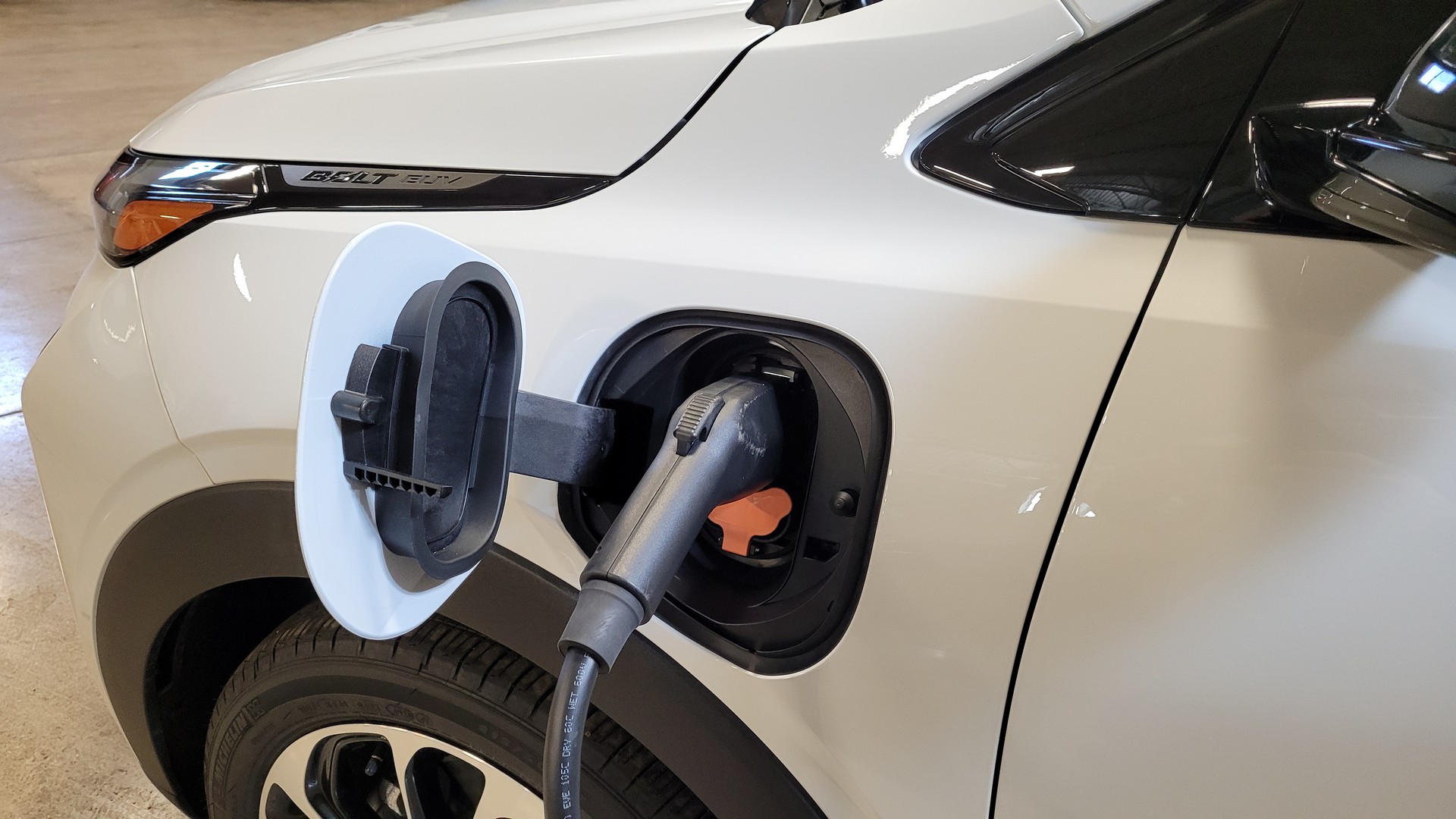 When owners need to recharge, they can get up to 95 miles (153 km) of range in just 30 minutes by using a DC fast charger. However, most charging occurs at home and owners can expect a full charge in approximately seven hours with a 240V connection. If they have to make do with a standard 120V outlet, they can expect 4 miles (6.4 km) of range for every hour of charging.

Since drivers will encounter 120V and 240V outlets most often, the Bolt EUV comes with a new Dual Level Charge Cord. It features a swappable section which allows owners to easily go from a 120V to 240V setup and vice versa. That’s a neat trick and it saves owners from having to buy a second charging cable.  However, it’s limited to a charging rate of 7.2 kW instead of the vehicle’s maximum Level 2 capacity of 11 kW.

Speaking of convenience, Chevrolet has teamed up with Qmerit to offer free standard installation of Level 2 charging capability in the house of eligible customers who purchase or lease a Bolt EUV. As part of the offer, the company will cover the installation of a 240V outlet and a new 40-amp breaker in an existing electrical panel.

This promises to save customers money, while also allowing them to get the most out of their EV. Additional details will be announced closer to launch, but it appears this will be a limited time offer.

Super Cruise In A Chevy

One of the crossover’s keynote features is the Super Cruise semi-autonomous driving system, which used to be exclusive to Cadillac. It’s a $2,200 option on the Premier trim and it allows for hands-free driving on more than 200,000 miles (321,869 km) of roadway in the United States and Canada.

The system uses LiDAR map data as well as cameras, sensors and real-time positioning information to enable the vehicle to steer itself on certain roadways. The system works in conjunction with adaptive cruise control, so you can sit back and relax on your commute while also keeping an eye on the road ahead.

During our testing, the technology worked well and was easy to use as you turn on adaptive cruise control and then hit the Super Cruise button. That’s oversimplifying things a bit as the vehicle checks to make sure you’re on a compatible roadway and paying sufficient attention before activating. 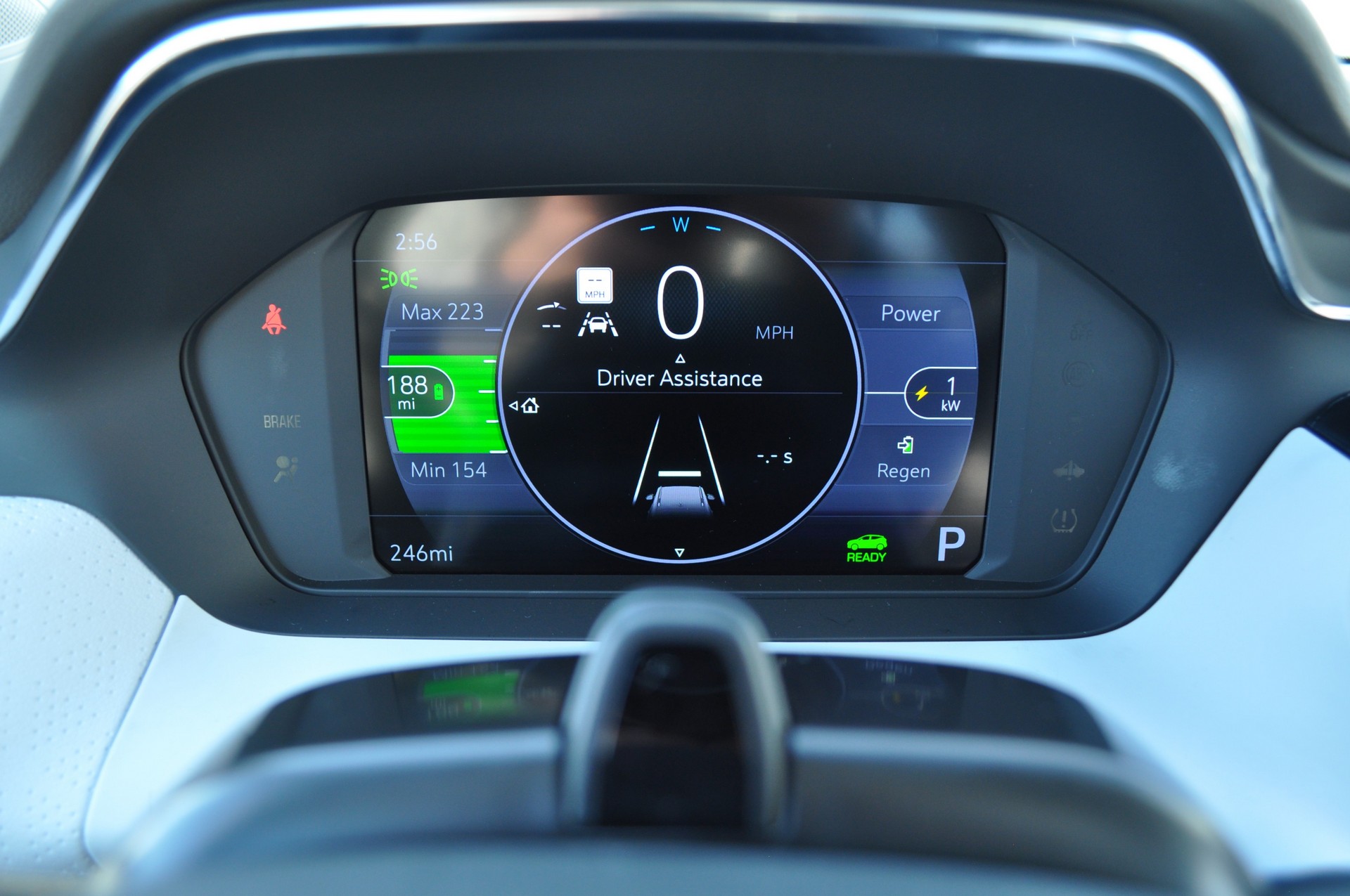 When Super Cruise is engaged, you can remove your hands from the steering wheel and your feet from the pedals. This makes ‘driving’ a bit boring, but the crossover easily dealt with traffic as well as curves in the road.

While the EUV’s Super Cruise system doesn’t have an automated lane change function like newer Cadillacs, that isn’t much of an issue. Instead, you simply change lanes normally and the system is ready to take back control once you get centered in the new lane.

Since safety is key, there’s a Driver Attention System which uses a small camera on top of the steering column to make sure you’re watching the road ahead. Thankfully, it’s not overly aggressive as you divert your gaze to adjust vehicle setting without an electronic nanny begging for attention. That being said, if you take your eyes off the road for too long it will let you know.

Furthermore, Super Cruise will provide audible and visual warnings if you need to resume control of the vehicle. In extreme cases, if the driver fails to respond, the vehicle will gradually brake to a stop and connect to an OnStar advisor to ensure you’re okay.

Unfortunately, owners will only get three years of Super Cruise with the purchase or lease of their Bolt EUV. After that point, they’ll have to sign up for a paid plan to continue using the feature they’ve already shelled out $2,200 for.

A host of options will be available including a $495 Driver Confidence package which adds Lane Change Alert with Side Blind Zone Alert, Rear Cross Traffic Alert and Rear Park Assist. Customers can also get the $895 Comfort package that includes an 8-way power driver’s seat, heated front seats and a leather-wrapped heated steering wheel.

Buyers looking for more luxury can get the $1,695 Convenience package. It adds leather upholstery, heated / ventilated front seats and an auto-dimming rearview mirror. Other niceties include rear arm rest and two-tone alloy wheels. 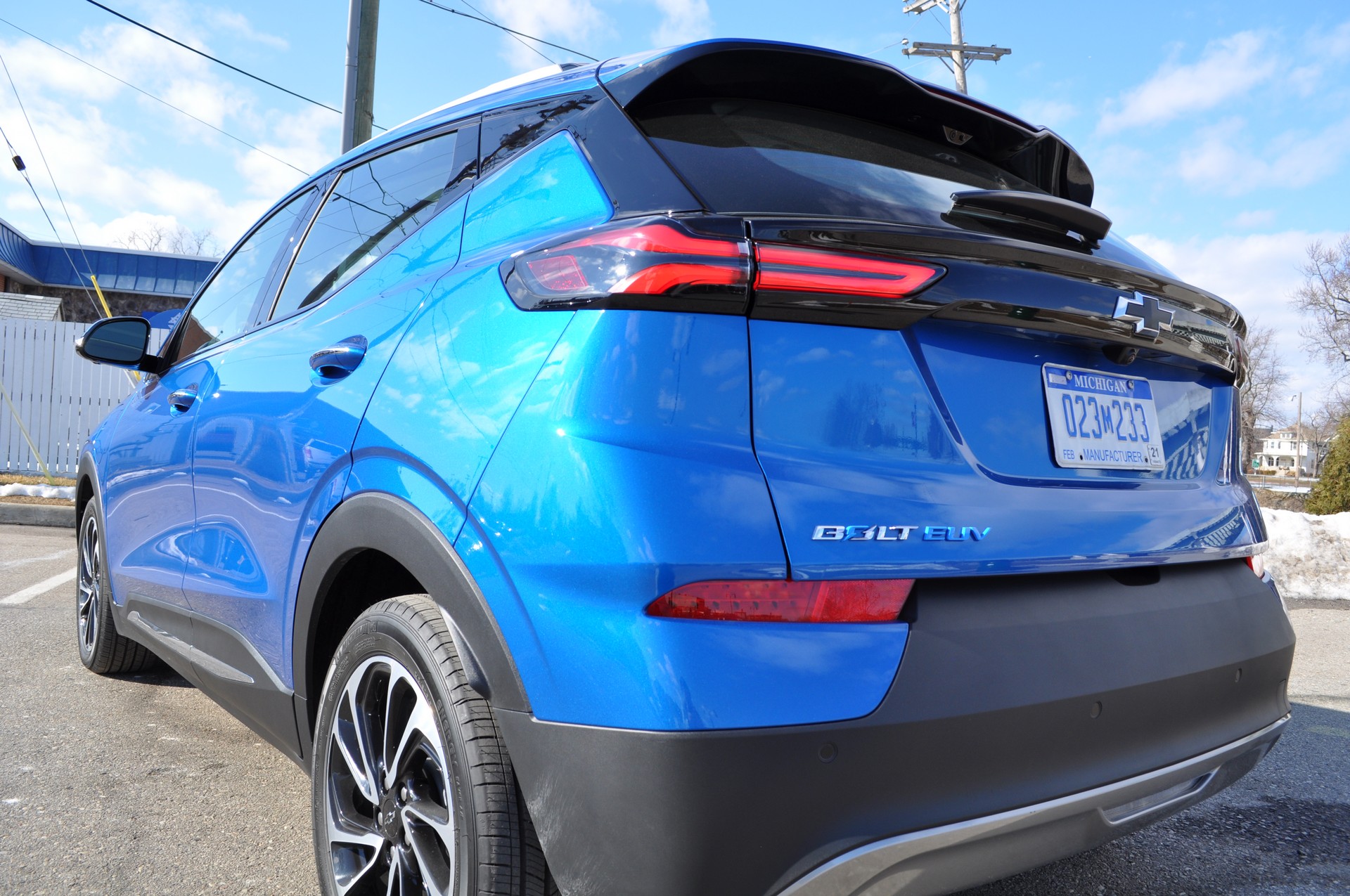 Moving up the trim ladder is the Bolt EUV Premier, which begins at $38,495. It builds on the base model by coming standard with leather as well as high-tech features such as adaptive cruise control, a rear camera mirror and a surround vision system.

The Premier can also be equipped with higher end options such as the aforementioned Super Cruise Package. It’s joined by a $2,495 Sun & Sound Package that adds a panoramic sunroof, a Bose audio system and GPS navigation.

Sitting at the top of the range is the Bolt EUV Launch Edition. It costs $43,495 but comes loaded with features such as a panoramic sunroof, an illuminated charging port and Super Cruise, as well as unique wheels and badging.

While it’s hard to argue with the pricing, it’s important to note the Bolt EUV isn’t eligible for a $7,500 federal tax credit. This makes it a tougher sale as the credit lowers the price of the Ford Mustang Mach-E to $36,495 while the Volkswagen ID.4 drops to $33,690. 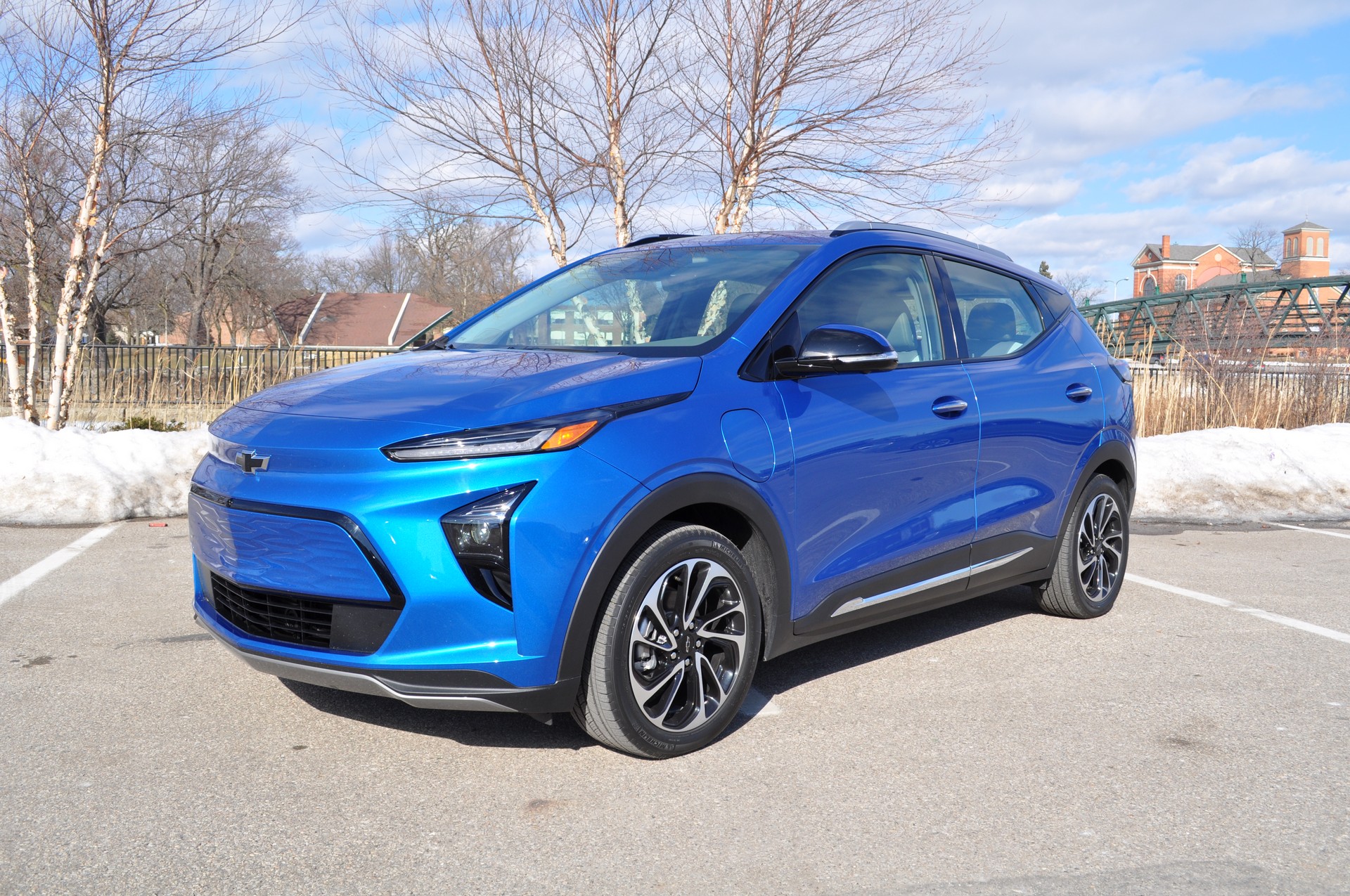 When Chevrolet was developing the 2022 Bolt EUV, they listened to consumers who told them they wanted crossover-inspired styling and a nicer interior with more room. The model certainly ticks those boxes and then some as it costs $3,500 less than the 2021 Bolt. On top of that, it comes with a swappable charging cord and free Level 2 charging installation, which makes going electric easier than ever.

There aren’t really any major downsides either as the EUV only weighs 90 lbs (41 kg) more than the hatchback and its estimated range is just 9 miles (14 km) shorter. Throw in a good ride and advanced features such as Super Cruise, and the 2022 Bolt EUV is certainly an interesting option for people in the market for an electric vehicle.

That being said, the lack of all-wheel drive and federal tax credit eligibility makes the Bolt EUV quite a bit less appealing. This is a shame as it seems like a good crossover and it’s sad the model is effectively getting punished by regulations that were meant to spur electric vehicle adoption.

There has, however, been talk of extending and expanding the electric vehicle tax credit and, if that were to occur, the Bolt EUV would be considerably more appealing. Guess we’ll just have to wait and see.