It shouldn’t really come as a shock that Porsche tests its car thoroughly. Just quite how thorough its tests are might surprise you, though.

In preparing the 911 GT3 for the road, Porsche engineers really went above and beyond testing the car, which culminated in a 5,000 km (3,106-mile) test at the Nardo test track in Italy. The 23 km (14-mile) circular track is owned by Porsche and boy did they put it to use.

Filled with highly precise race car technology, Porsche wanted to make sure that the 911 GT3’s engine was durable enough for the road. So they drove it at a constant speed of 300 km/h (186 mph) for the whole distance, stopping only for fuel.

The engine technology they were testing was based on the engine out of the 911 GT3 R Cup car. The 4.0-liter engine in the road car makes use of rigid rocker arms, VarioCam technology, wide connecting-rod bearings, plasma coated cylinder liners, and more, all of which help improve the engine’s performance and ensured that the flat-six can get to its 9,000 RPM redline reliably. 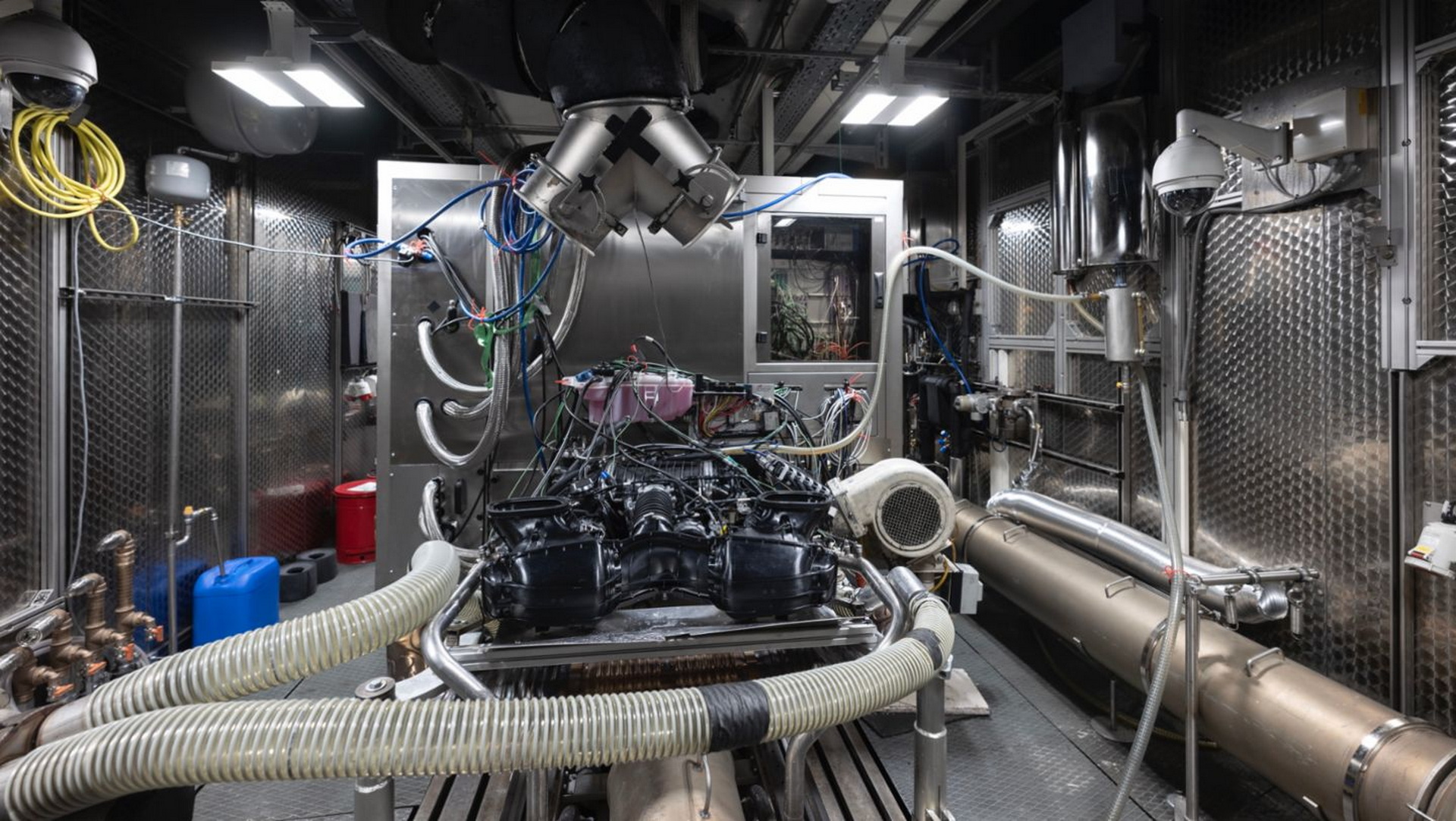 We hardly need to remind you that the naturally aspirated, six-cylinder engine makes 502 hp, nearly 10 more than the outgoing model. Naturally, then, they didn’t just stick in the car and truck it to Nardo.

“In total, the engine in the new GT3 ran for more than 22,000 hours on the test rig. During testing, we repeatedly simulated typical circuit profiles and ran the engine at full throttle for a very high proportion of the time,” said Thomas Mader, Project Manager GT Road Car Engines.

And that’s not the only racing technology that has helped ensure that the 911 GT3 can run at 186 mph for more than 16 hours straight. Aerodynamic tricks learned on the 911 RSR and the 911 GT3 Cup car also found their way onto the new road car. The most prominent are the swan neck mounts used on the rear spoiler. These hold the rear wing from above, allowing the air to pass over its bottom as undisturbed as possible.

“We developed the aerodynamics of the new 911 GT3 in around 700 simulations. We spent more than 160 hours fine-tuning the car in the wind tunnel,” said aerodynamics engineer Mathias Roll. 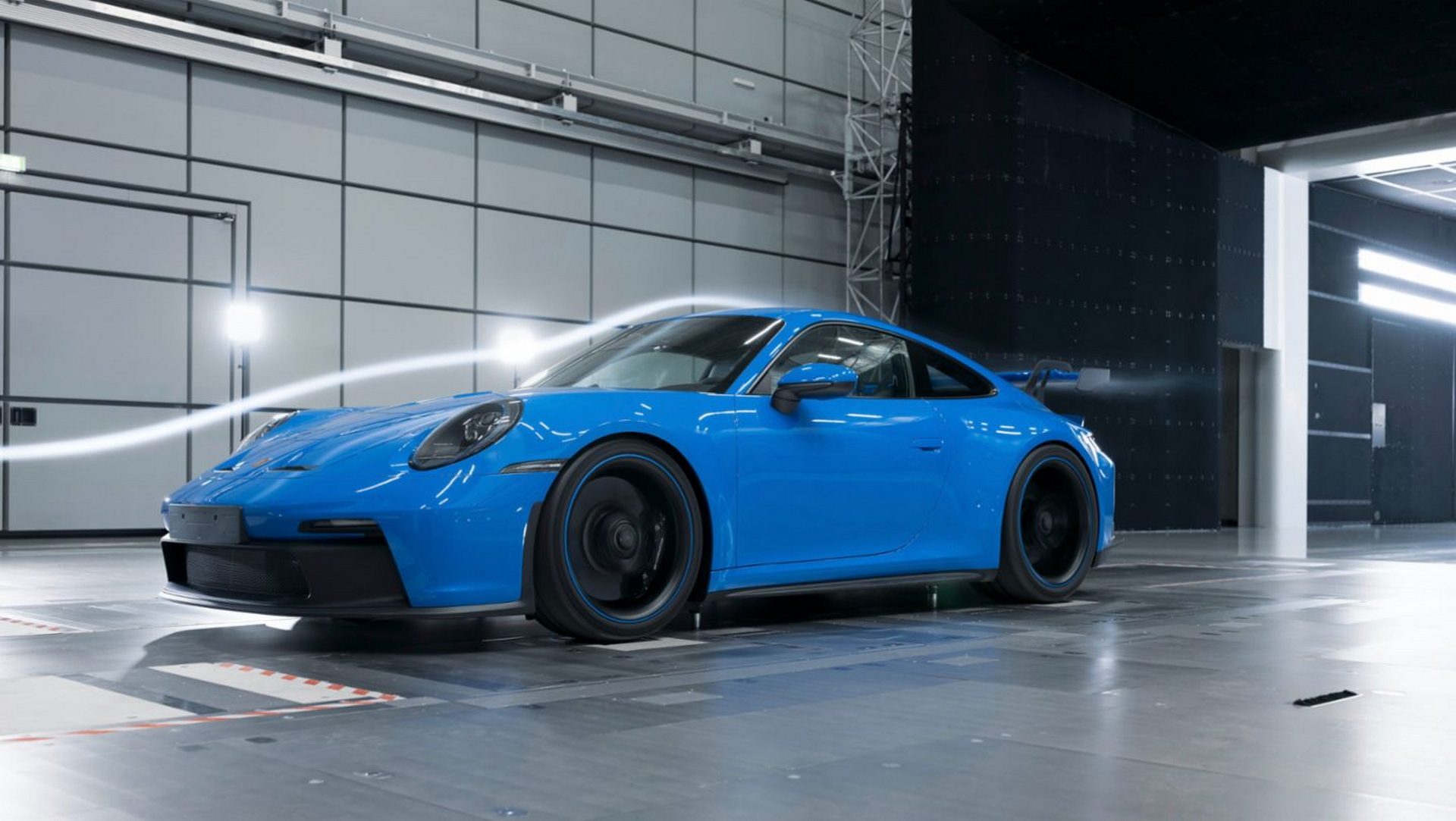 Porsche’s high-tech wind tunnel allows the car to sit at an angle so that engineers can see what the air is doing in more situations than just head-on. That led not just to rear wing improvements, but front splitter improvements, too.

“The new 911 GT3 generates 50 percent more downforce than its predecessor at 200 km/h just in the ex-works setting. In the setting with maximum downforce, the increase is as much as over 150 percent,” said Roll.

Porsche argues that the reason the 911 GT3 could benefit from all this technology is because of everything its engineers learn at the track.

“When we have the same engineers who develop our race cars also working on the design of a new GT car for the road, that is the most direct technology transfer I can imagine,” said Andreas Preuninger, Director GT Model Line.