While the Korean version of the Elantra N was unveiled in July, Hyundai U.S.A has now detailed its version of the car. Virtually identical to the global model, Hyundai has given the U.S. access to the full complement of performance upgrades that mark the car out as a steamy sedan – including the option of a manual gearbox.

The Elantra N is powered by a 2.0-liter turbocharged engine that makes 276 hp (279 PS/205 kW) and 289 lb-ft (391 Nm) of torque. Something that Hyundai is calling “N Grin Shift” (NGS), though, will give you up to 286 hp (289 PS/213 kW) by temporarily utilizing turbocharger overboost and maximizing transmission response for up to 20 seconds at a time. The company has also worked to reduce the cool-down time between NGS boosts to 40 seconds so that it can be used lap after lap on a track. 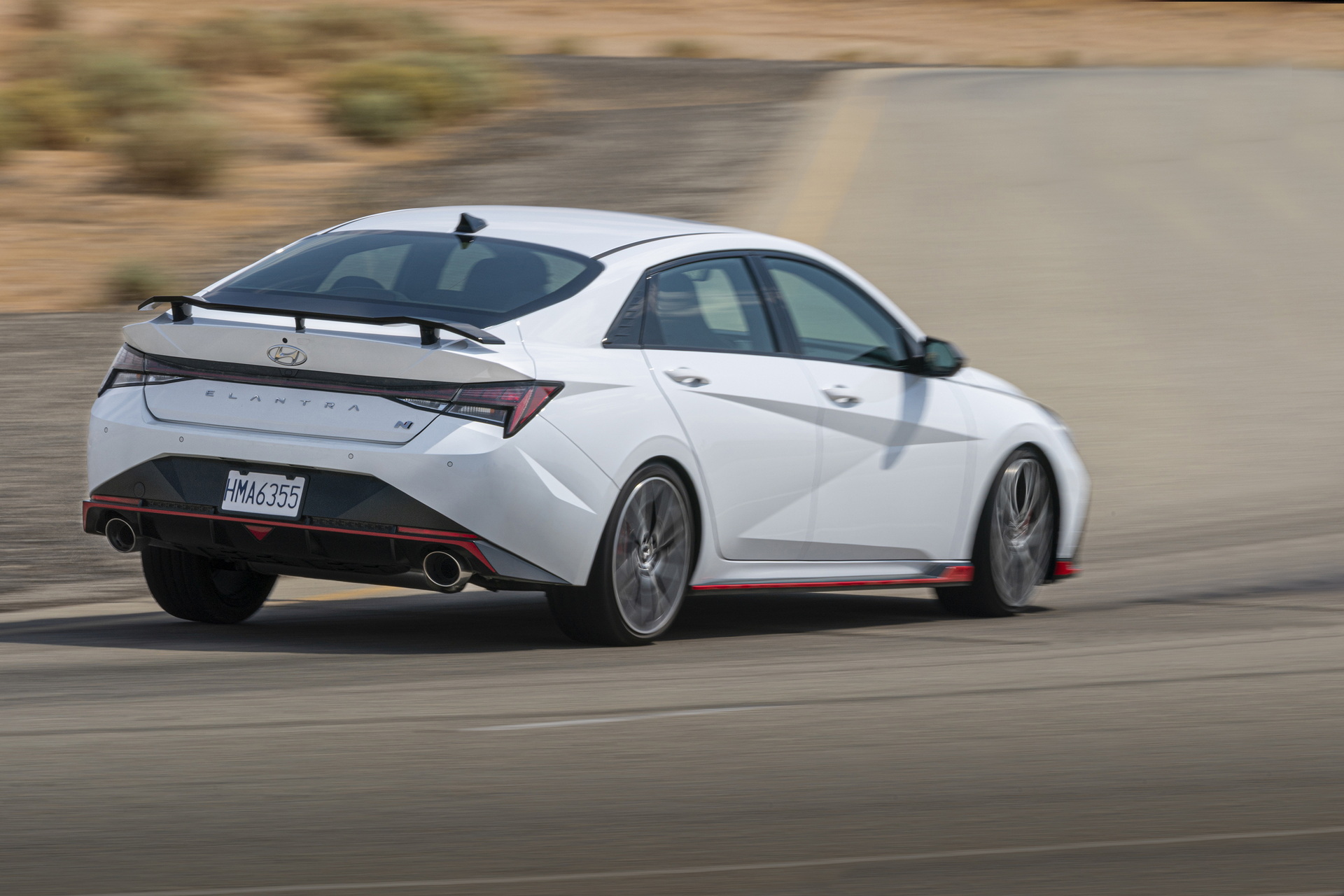 Even when the turbos aren’t giving you an extra 10 horses, though, Hyundai says it worked to create a power band optimized for driving dynamics. What it calls flat-power means that you get a power plateau between 5,500-6,000 RPM, rather than a power peak that starts to fall off as soon you hit it. The engine also delivers max torque between 2,100 and 4,700 RPM. All of which is good enough for a 0-60 mph (0-100 km/h) time of “around 5.0 seconds”.

A 6-Speed Manual Or An 8-Speed Auto

The good news for Americans is that they will also have the option of either getting a six-speed manual transmission or an 8-speed dual-clutch transmission. While the former gets rev-matching tech, the latter gets N Power Shift (NPS) and N Track Sense Shifting (NTS) technology.

N Power Shift seeks to enhance acceleration by maximizing engine torque during upshifts. The NPS feature is designed to feel like a sequential gearbox and provides you with a push feeling during upshifts. The NTS system, meanwhile, simply optimizes shift speed when the car thinks you might driving on a track. The Elantra N also comes with a launch control function for optimal acceleration. 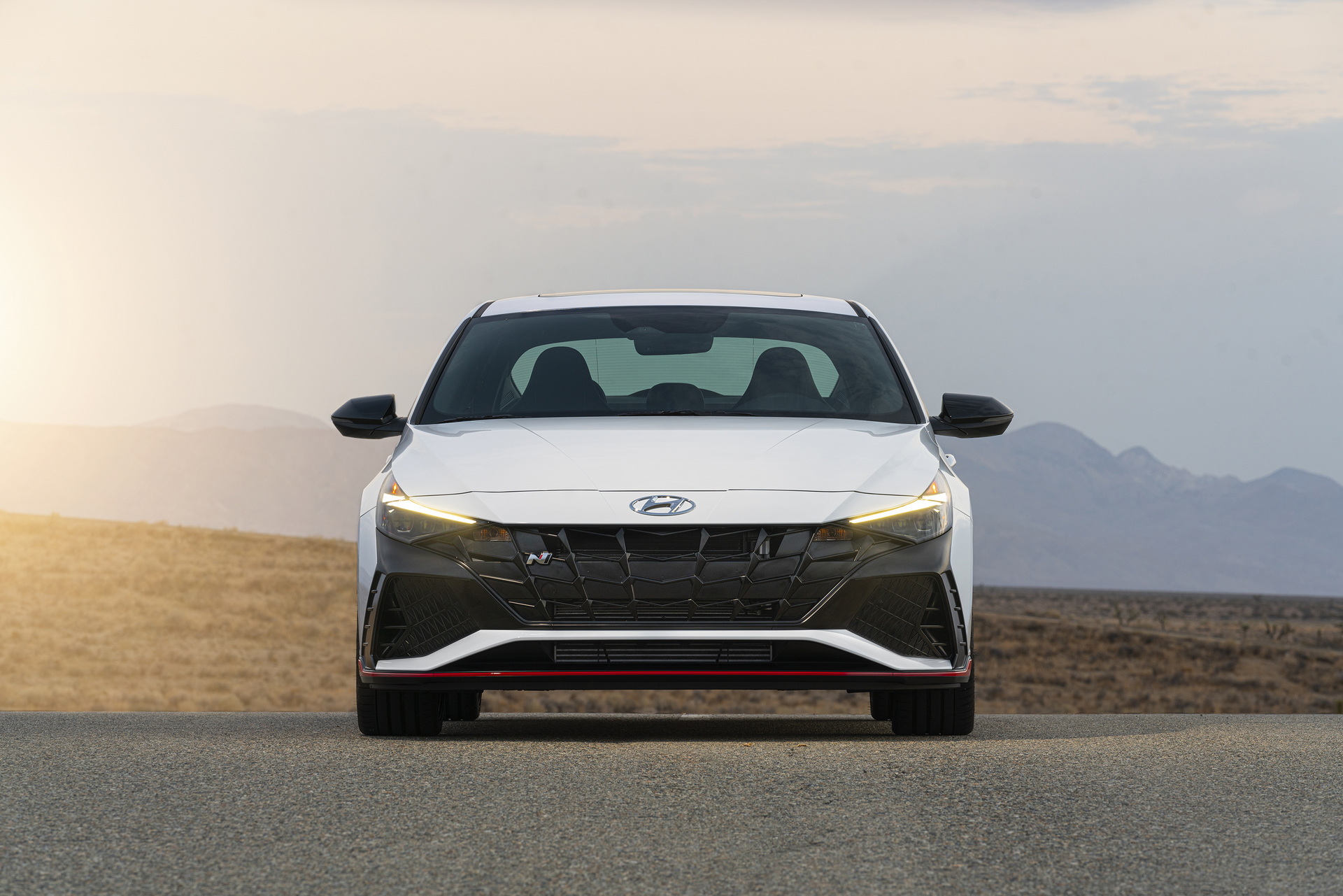 The Elantra N is designed for more than just straight-line speed, though. The car has also been given an electronic limited-slip differential that actively distributes torque between the inner and outer wheel when you’re cornering. That’s combined with an electronically controlled suspension that stiffens or loosens the suspension based on need. The stability control, meanwhile, has been to give a “rear-end drift” feeling to maximize excitement.

There have been mechanical improvements to the chassis, too, though. A rear wing improves aerodynamics while the front sub-frame has been reinforced, as has the rest of the chassis. An H-shaped multijointed rear stiff bar increases rigidity by 29% to improve handling. A 4-point strut ring derived from racecars also helps improve ride and handling precision and aluminum knuckles help reduce unsprung mass. 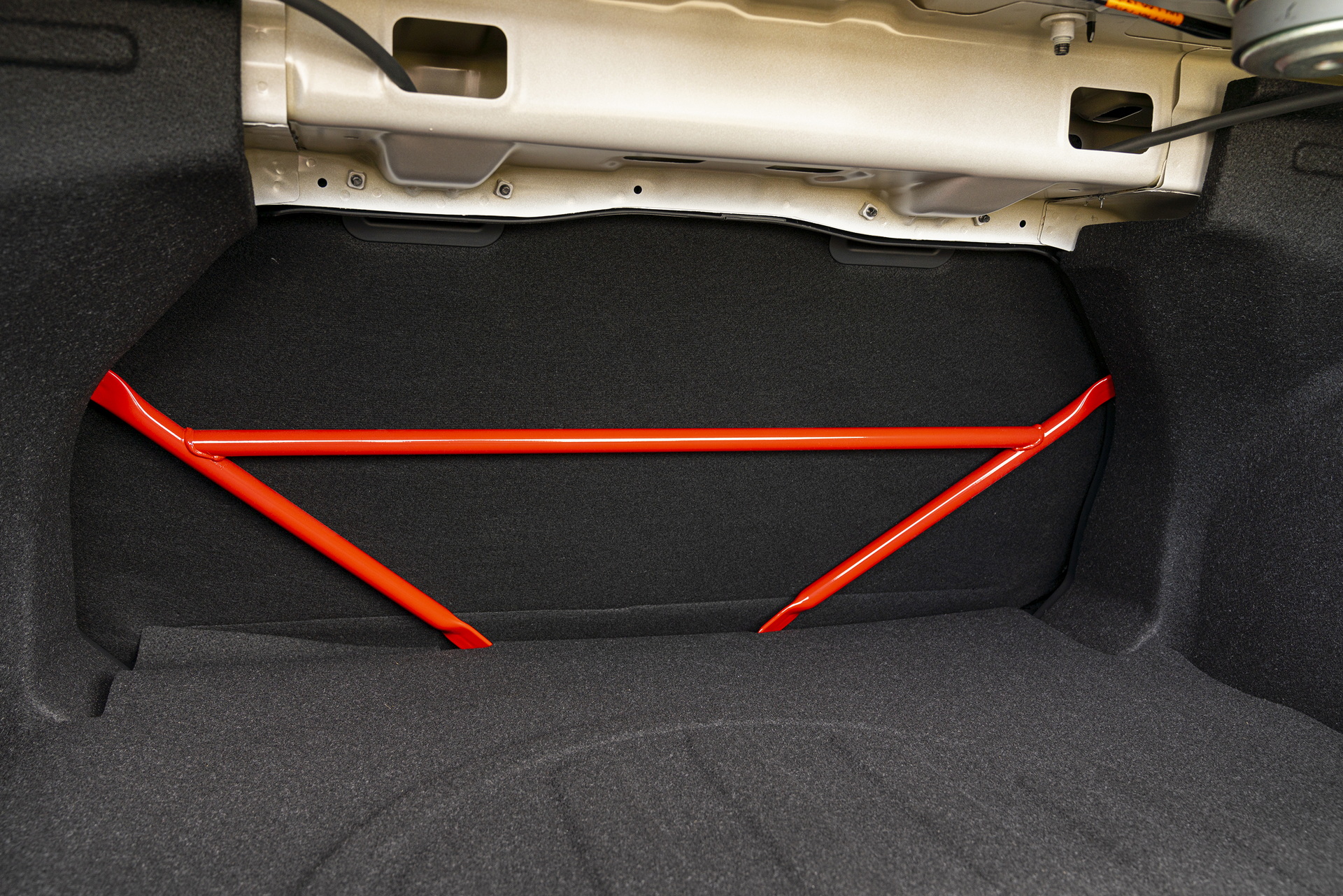 It’s not all just in pursuit of performance, though. A dual-compound insulator in the front suspension, along with the dual-compound trailing arm bushing helps improve ride and handling but also helps reduce NVH.

It is mostly about performance, though, and bigger, 14.2-inch (360mm) brake discs and high-friction brake pads help slow you down while reducing fade and maximizing bite. The brake system also pre-pressurizes the hydraulic system when it predicts that sudden braking is on its way. Rounding the whole car out are 245-section width Michelin Pilot Sport 4S tires wrapped around 19-inch alloy wheels.

Exhausts That Pop, Speakers That Lie

So far, so good. What comes next may be a little more challenging for enthusiasts, though, as the N Sound Equalizer “amplifies dynamic driving sound” through the speakers. The system can allegedly be made to sound like a high-performance touring car. It’s not all artificial sound, though. The car can control fuel flow to a single cylinder and fully opens the exhaust valve during upshifts to create a bang, which sounds like fun.

The Elantra N also gets an advanced infotainment system with an N-exclusive graphic interface. Colorful design graphics help deliver performance information about the oil, the coolant, the torque, and your boost intuitively. Driving modes help optimize the experience for the driving conditions.

On the less technical side, N-branded seats will help keep you in place, while the N-branded steering wheel, shifter, and metal pedals help make the driver feel like they’re in a special car. On models fitted with the 8-speed DCT transmission, the steering wheel gets a big red NGS button that acts like a boost button, allowing you to pick the moment when you want your 10 extra horsepower for 20 seconds. It also features N buttons that can be configured to put you directly into the driving modes you prefer.

Coming To A U.S. Dealer Near You This Winter

The Elantra N is expected to appear in Hyundai showrooms near the end of the year. Prices will be revealed closer to that date.