Subaru’s legendary WRX is back. Expected to cost around $30,000 when it lands in U.S. showrooms in early 2022, the rally-inspired sedan moves to the same Subaru Global Platform as cars like the Outback, and away from the Impreza line, but is far more performance focused than either.

Power comes from a 2.4-liter turbocharged four-cylinder boxer engine that churns out 271 hp and 258 lbs-ft of torque. Those numbers means it’s only 3 hp more powerful than last year’s 2.0-liter car, and much less punchy than the 300 hp some had hoped for. Since Subaru hasn’t released any performance numbers we’ll have to wait to see whether new beats old against the clock.

No prizes for guessing that the boxer’s energy is delivered to all four wheels in true Subaru tradition. The Subaru Symmetrical All-Wheel Drive features Active Torque Vectoring, and sends power to the road through a choice of six-speed manual transmission, or a revised version of Subaru’s CVT that can be shifted manually through eight fixed ratios.

The two-pedal transmission is claimed to move 30 percent faster on upshifts and 50 percent faster on downshifts, and comes as standard on the upscale WRX GT, which is also equipped with electronically controlled adaptive dampers, a first for a WRX.

As well as allowing drivers to select from Comfort, Normal and Sport suspension settings, the GT brings eight-way powered Recaro seats upholstered in Ultrasuede with contrasting red stitching, Subaru’s EyeSight safety package (actually standard on automatic base cars, too), and rides on 18-inch wheels instead of the stock WRX’s seventeens.

If the power figures mentioned earlier suggest the new WRX won’t perform any differently to last year’s car, at least you can’t accuse them of looking too much alike. The switch to the new platform brings a much wider look to the WRX, which gets narrow, claw-shaped LED headlights and a broader hood scoop. The front fenders are made from aluminium, saving 5 lbs (2.3 kg) from the curb weight, while rugged arch spats give it a curiously crossover-like vibe. Subaru says those trims, the sill panels, and the engine under tray are finished with a texture that reduces air resistance.

Moving to the rear, you’ll have to hit the aftermarket up if you want a high-rise wing. As stock, the WRX makes do with a low-profile body-color spoiler. The rear taillights, which are designed to look ‘reminiscent of volcanic magma’ should draw a few comments, however. But don’t be surprised if most of them will be about much they look like the new Civic’s. 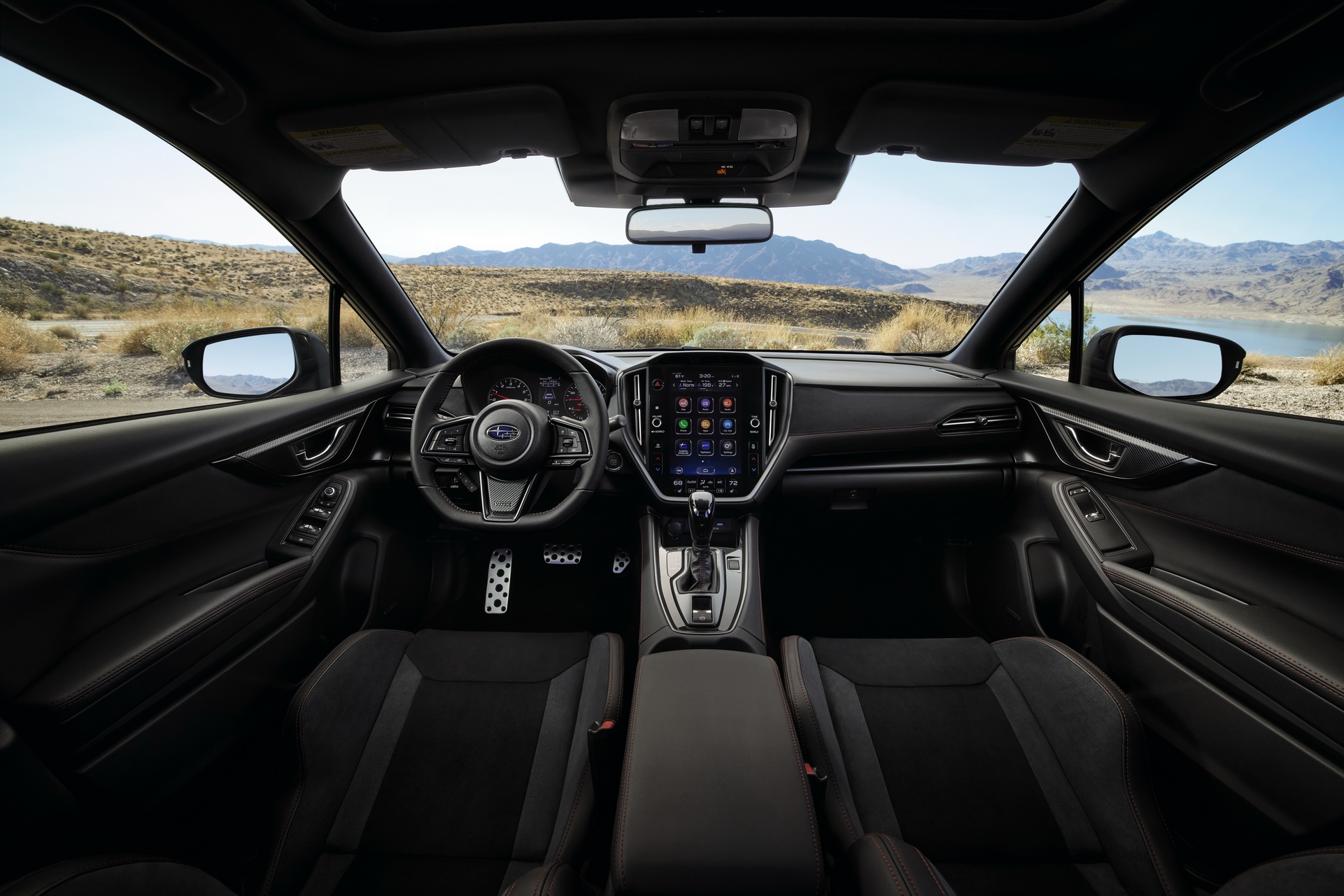 Inside, there’s plenty going on to make an Outback or Ascent driver feel at home, specifically the large 11.6-inch portrait Starlink touchscreen in the center console that we’re pleased to see retains physical controls for things like volume and cabin temperature. But a flat-bottom sports steering wheel and aluminium pedal trims signal the WRX’s sporting intent.

Related: Subaru Recalls 2021 Impreza Over A Bad Weld, Some Drivers Told Not To Drive Their Car

We’ll likely have to wait until early 2022 to get behind the wheel and find out for ourselves how the WRX drives, but the omens are good. Subaru says the new body structure has a lower center of gravity, delivers 28 percent more torsional rigidity, and features suspension mounting points that are 75 per cent more rigid than before. Plus there’s a new twin-pinion electric steering system that’s claimed to offer more natural steering feel.

Do you think Subaru has done enough to differentiate the WRX from last year’s model? And now we know how the base car looks, what do you want from the STI version that’s still to come? Leave us a comment and let us know.