Trucks are as American as apple pie and the Ford F-Series has been the best-selling vehicle in the United States for nearly four decades.

While the F-150 is the undisputed champion, it’s far from the only full-size pickup as the Chevrolet Silverado 1500 and Ram 1500 have been in an increasingly tight battle for second and third place.

Of course, there’s also the Toyota Tundra and Nissan Titan. Often dismissed as also-rans, these trucks sell in smaller numbers but still have a dedicated following. That’s especially true in regards to the Tundra as 109,203 units were sold in the United States last year, despite being nearly a decade and a half old.

Toyota is now looking for a bigger slice of the market as they’ve introduced the redesigned 2022 Tundra. It’s a vast improvement and shows Toyota isn’t going to settle for second-tier status.

Given that full-size trucks are wildly popular in America, it comes as little surprise the Tundra was designed in the United States. Stylists in Ann Arbor and Newport Beach, California wanted to express the model’s toughness and capability, so they came up with the idea of “technical muscle” and “interlocking” components to showcase the truck’s ruggedness.

While the look varies depending on trim, all Tundras have a menacing front fascia with an imposing grille. The latter is flanked by vertical air intakes and T-shaped headlights.

Moving further back, there’s a sculpted hood and muscular fenders. The truck also has blacked out A-pillars and a more dynamic greenhouse, which gives the Tundra a sportier and more modern appearance. 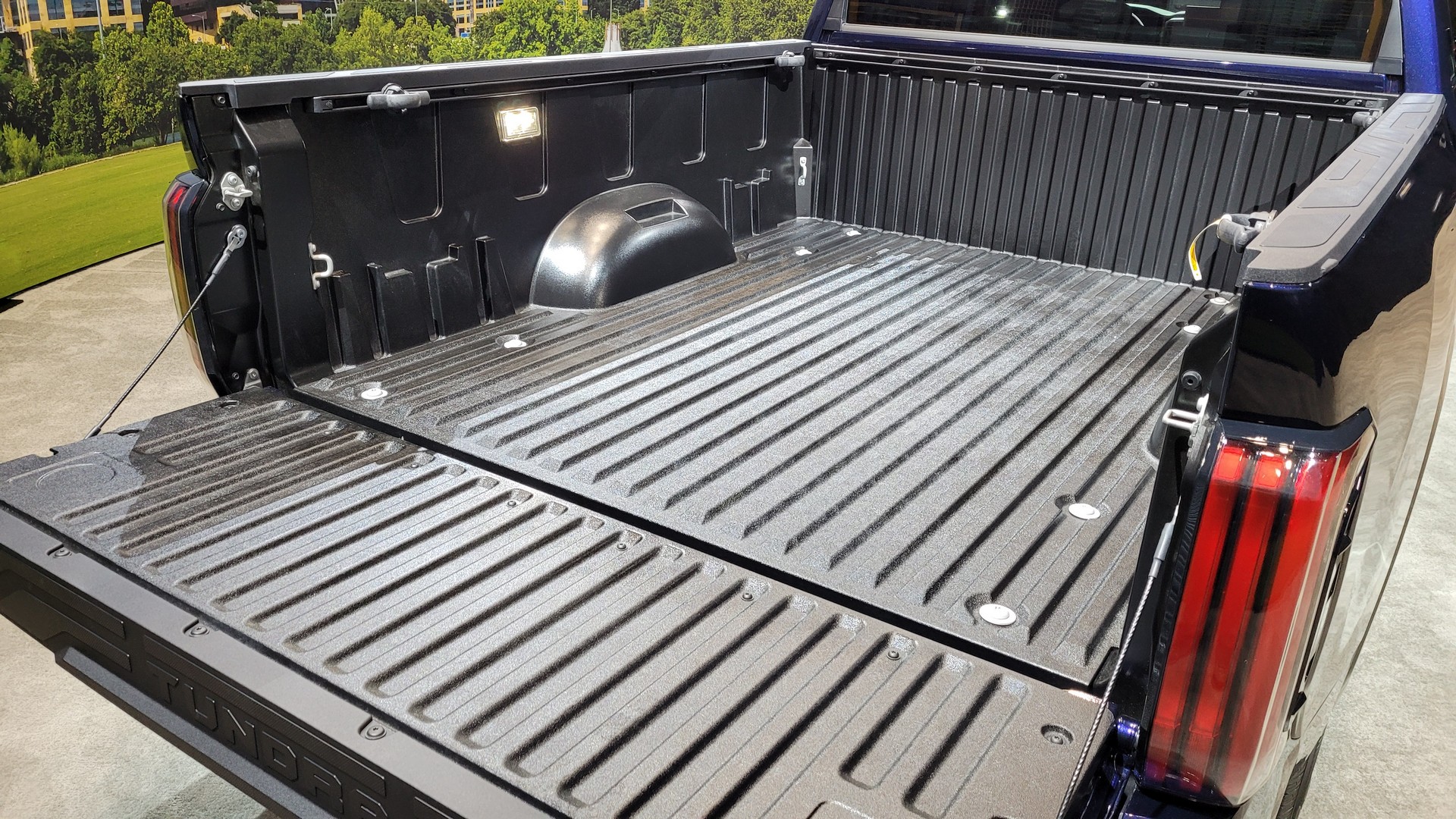 Out back, there’s an all-new sheet molded bed which has aluminum cross members. It draws inspiration from the bed used in the Tacoma, and its construction enables the bed to be lightweight and offer better protection against dents and corrosion.

The bed looks a little plain, but it features tie-downs, rails and wheel wells that barely intrude. Buyers will also find bed lights and a 120V outlet. While the latter isn’t as cool as the F-150’s onboard generator, contractors told Toyota they were primarily concerned about charging batteries for their power tools and the outlet is more than capable of handling this task.

Getting back to styling, the 2022 Tundra has three-dimensional taillights and an all-new tailgate with debossed badging. The latter isn’t the only notable thing about the tailgate as it’s 20% lighter than its predecessor and features a release on the key fob. 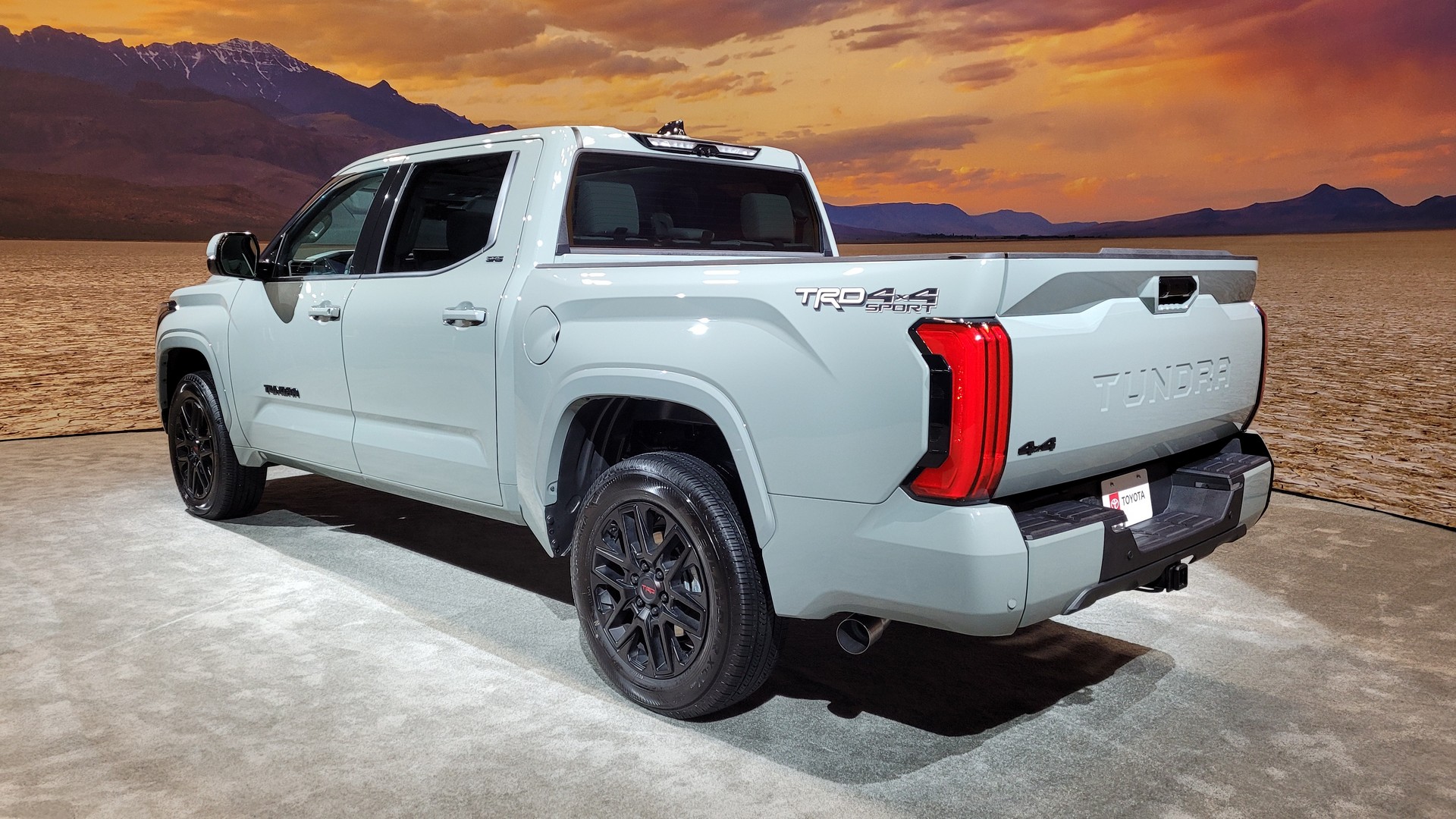 Other highlights include an integrated rear bumper for a cleaner appearance. The latter is an interesting touch as it eliminates the typical gap between the rear end and bumper, but the model lacks handy corner steps.

The 2022 Tundra will be offered in Double Cab and CrewMax body styles. The former can be had with a 6.5- or 8.1-foot bed, while the latter offers a 5.5 foot bed as well as a newly available 6.5 foot bed.  Customers requested the longer bed and it’s a big deal if you routinely haul long items.

A Modern And High-Tech Interior 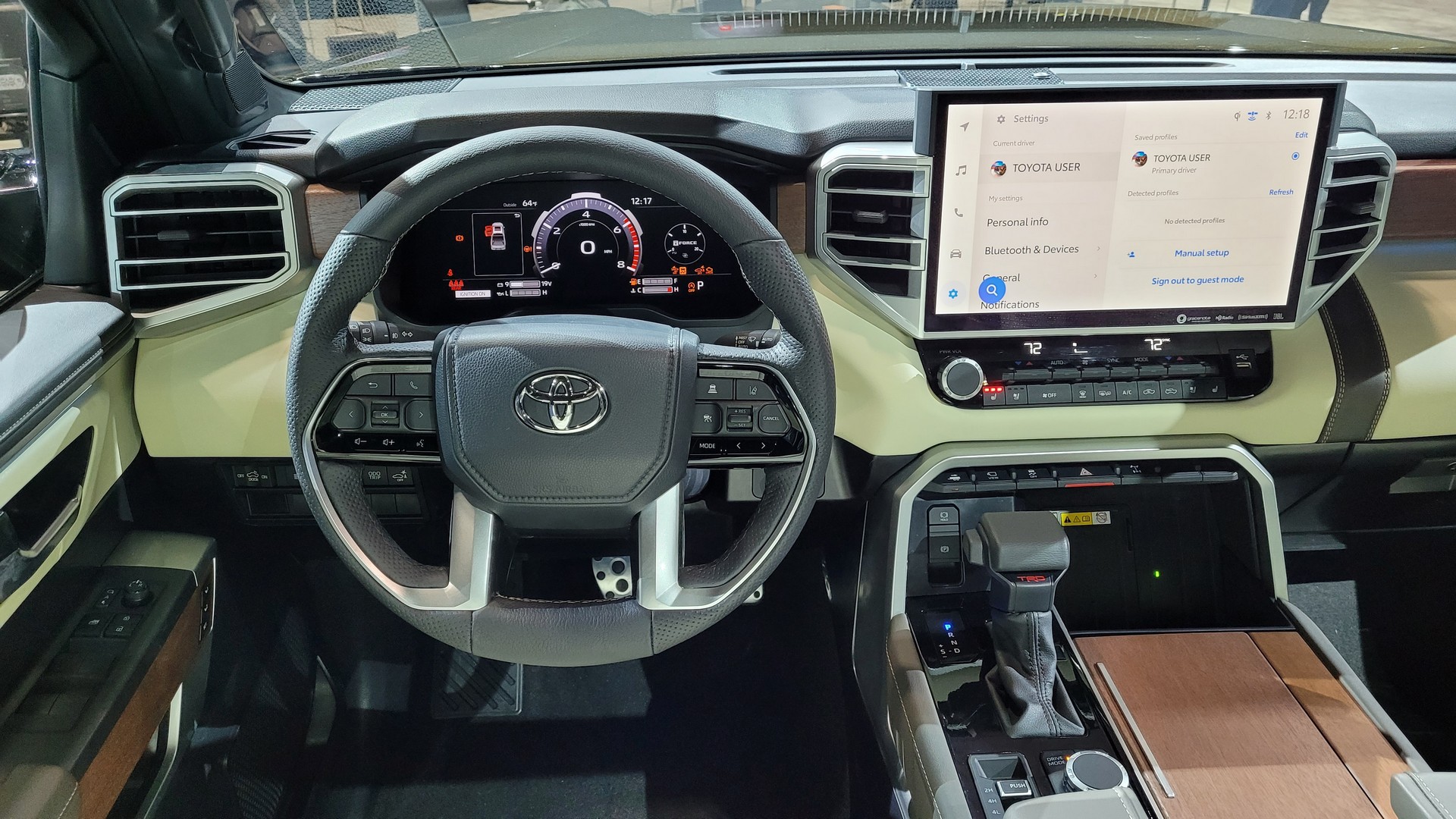 The Tundra’s modern design continues in the cabin as there’s a high-tech cockpit with higher quality materials and an improved design.

Drivers sit behind an all-new steering wheel and find themselves looking at analog gauges and a 4.1-inch multi-information display or a 12.3-inch digital instrument cluster. Toyota has been slow to adopt digital clusters, so the display in the Tundra is a pleasant surprise and drivers will be greeted by one of five animations featuring national parks at startup.

That’s a nice touch, but the digital instrument cluster is more notable for featuring customizable content that includes options from tow gauges to pitch and roll displays. The cluster also changes depending on the selected drive mode and will provide specific information for towing or off-roading. 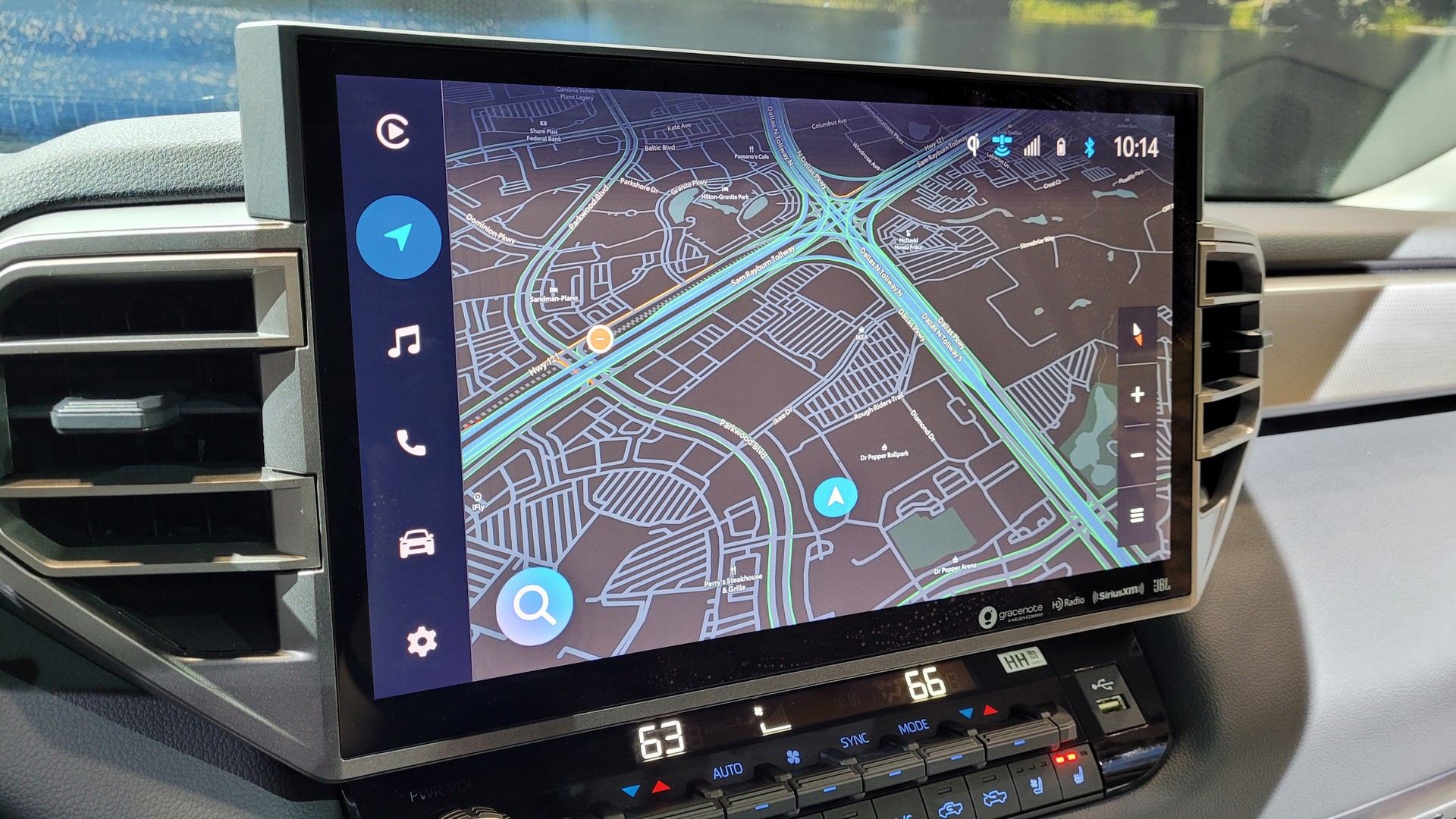 The real star of the show is Toyota’s all-new Audio Multimedia infotainment system, which debuts on the Tundra and will eventually spread to other models. We’ll dive into specifics in a separate article, but the system features 8- and 14-inch displays as well as five times the processing power of previous infotainment systems. Users will also find wireless Android Auto and Apple CarPlay compatibility as well as a virtual Intelligent Assistant and Google point of interest data.

Putting the displays aside, the Tundra features all-new switchgear including high-quality knobs with rubberized accents. The model also boasts a convenient wireless smartphone charger and an all-new center console with a retractable front tray.

While the interior isn’t as flashy as some competitors, the 1794 variant is certainly upscale. Toyota hasn’t released full details, but the model on display at a preview event in Texas had stylish two-tone leather seats and wood trim. The truck was also equipped with heated / ventilated front and rear seats as well as a heated leather steering wheel.

Speaking of the seats, they’re pretty comfortable and there’s tons of room up front. CrewMax variants also have spacious rear seats with impressive amounts of legroom. The only dimension that leaves something to be desired is rear headroom, but that’s only a problem for anyone who measures over 6’ 2” tall. 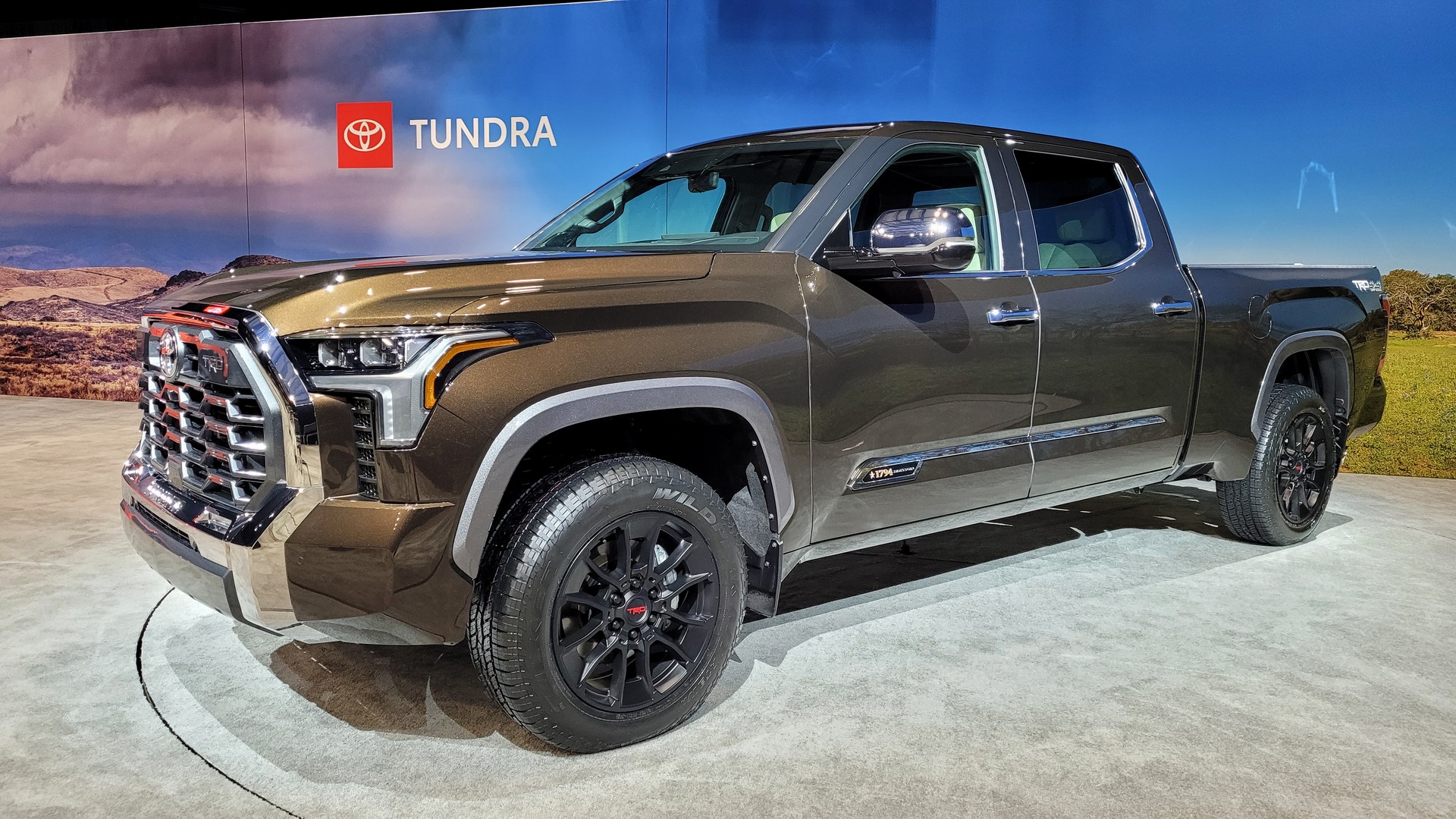 While the previous-generation Tundra was offered exclusively with a 5.7-liter V8 engine that produced 381 hp (284 kW / 386 PS) and 401 lb-ft (544 Nm) of torque, the redesigned truck sports two powertrains based around a twin-turbo 3.5-liter V6 engine.

A New Hybrid Variant With Raptor Levels Of Power 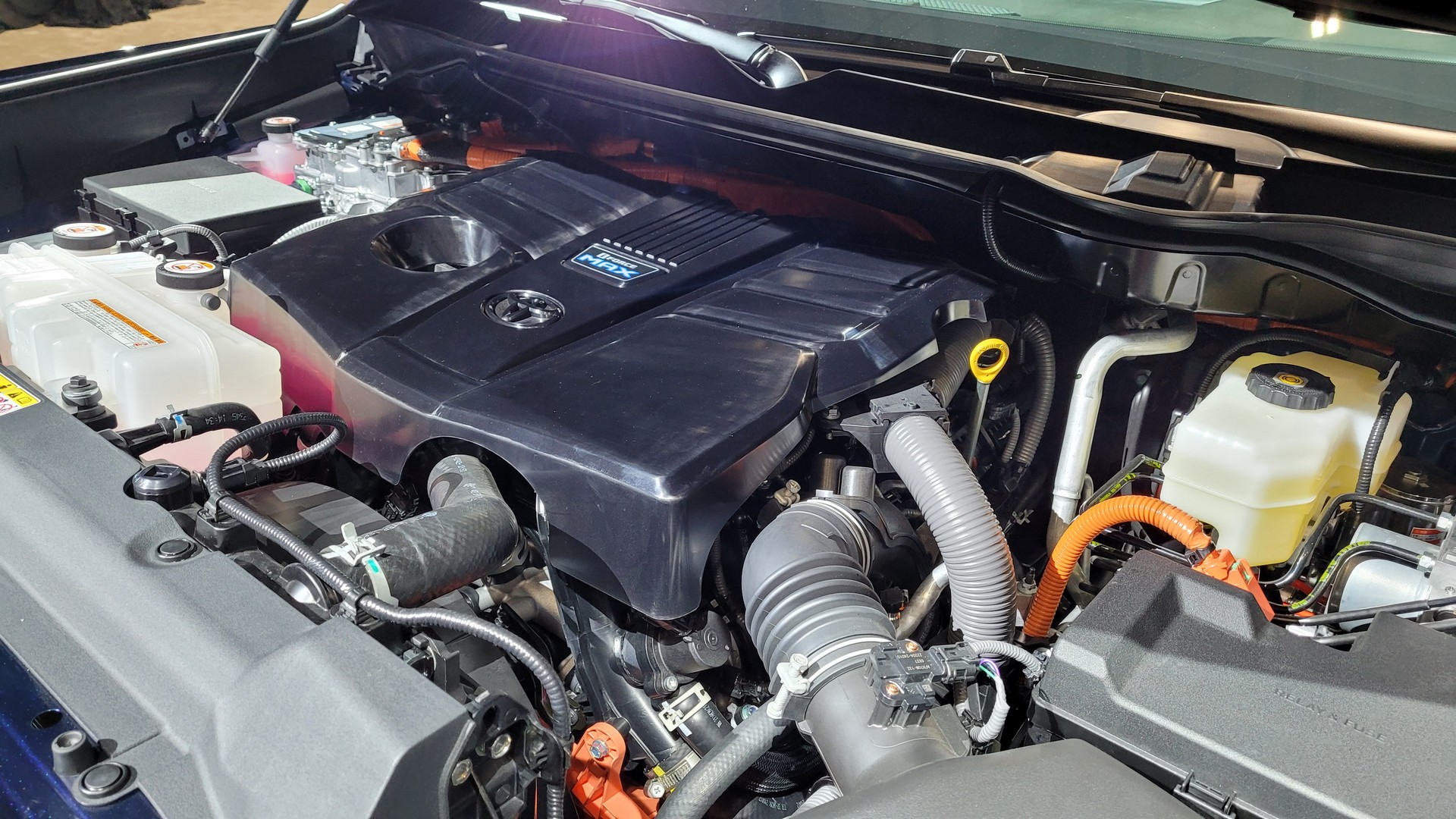 As you’ve probably guessed, the powertrain is focused on producing copious amounts of torque and that’s why the company went the hybrid route. Engineers can declare mission accomplished as the massive output bests everything in the Silverado’s engine bay and does the same against the Ram 1500, if you exclude the TRX variant. It also beats all of the mainstream engines in the F-150, while having 13 hp (10 kW / 13 PS) less and 73 lb-ft (99 Nm) more than the Raptor.

While both powertrains come with a ten-speed automatic transmission, the hybrid is notable for having an electric motor that is essentially sandwiched between the engine and gearbox. It serves a number of purposes as it can provide electric assist, energy regeneration and electric-only driving.

The motor is powered by a nickel-metal hydride battery, which resides under the rear seats. It enables the truck to operate on electricity alone at low speeds, although the real benefit is when the engine and electric motor work together to produce their combined output.

Furthermore, there are two tow / haul modes. The standard mode increases throttle response and is ideal for towing light to moderate items such as small trailers and small boats. Tow/Haul+ mode, on the other hand, has a more aggressive throttle response designed for towing large box trailers, boats and campers. On models equipped with the hybrid powertrain, Tow/Haul+ mode keeps the electric motor in continuous operation for improved responsiveness and it also deactivates the engine stop / start function for maximum performance.

Sticking with towing, the Tundra has a Panoramic View Monitor which provides a top-down view of the truck on the infotainment system. It also shows the truck bed, a split view to show what’s on each side of a trailer, and a hitch view to assist with connecting a trailer.

Customers will also find new power extending tow mirrors, which provide an increased field of view.  They have integrated LED trailering lights, which shine rearward to help when backing up a trailer at night.

The Tundra also has Trailer Back Guidance and a Straight Path Assist feature, which ensures your truck and trailer will back up in a straight line. They’re joined by an integrated trailer brake controller and a Blind Spot Monitor, which factors in the length of your trailer.

A Tougher Tundra Minus The Leaf Springs 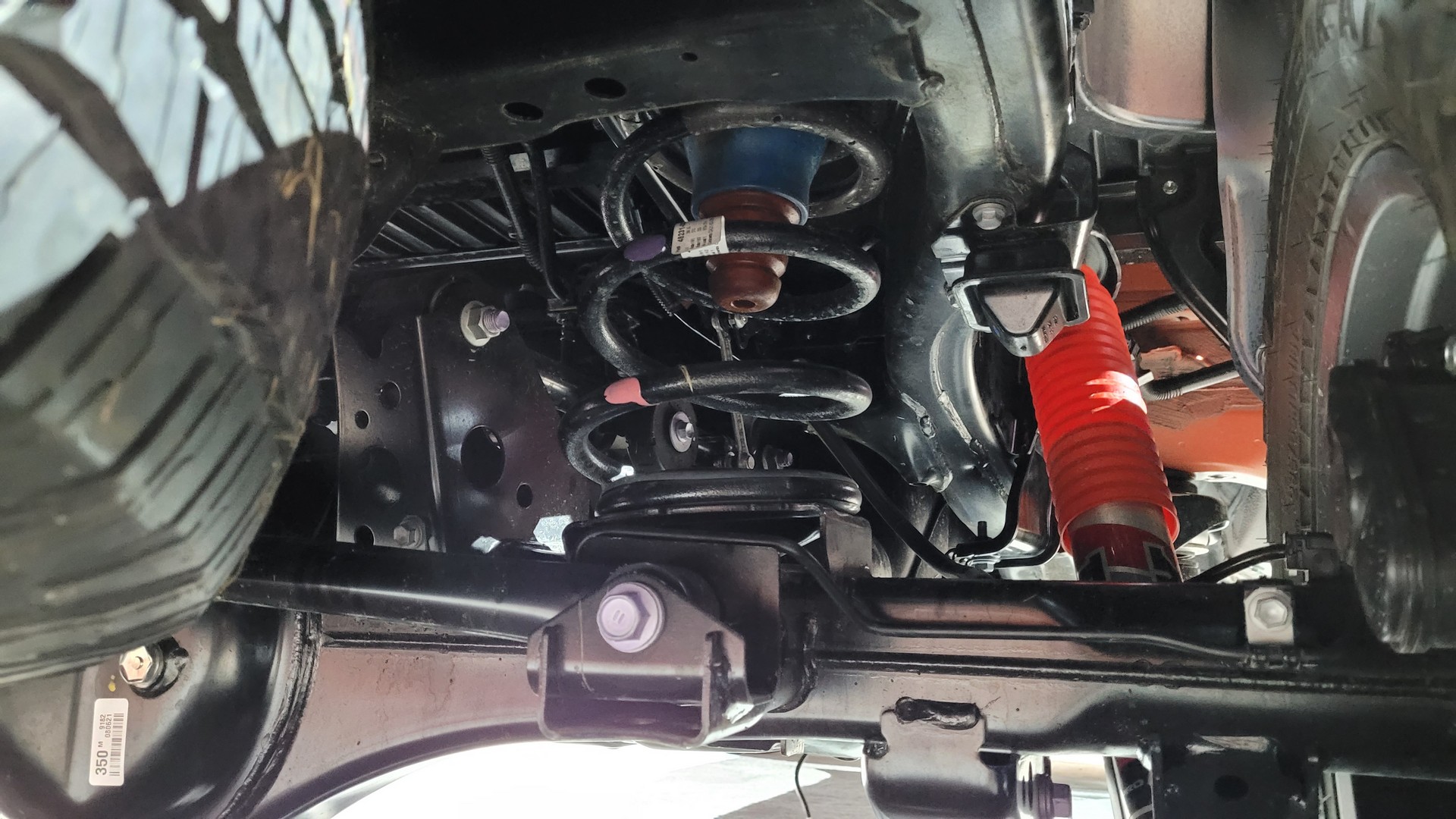 An all-new truck requires an all-new platform and, in this case, Toyota opted for a fully-boxed steel ladder frame that is shared with the Land Cruiser. It features a wider rear frame member to improve stability and towing, while high-strength steel has been employed throughout the chassis to increase rigidity.

The architecture also uses aluminum to save weight, while the frame cross members have more than doubled in size to provide additional rigidity and reinforcement. Engineers also added a new front cross member for the steering box and this adds rigidity, while also promising enhanced steering input and handling.

One of the most notable things about the 2022 Tundra is that it ditches leaf springs and adopts a multi-link rear suspension with coil springs. Toyota says the change improves ride comfort, straight-line stability, handling and towing capability. The shock absorbers have also been relocated outside the frame rails for improved efficiency and roll damping.

Certain variants can be equipped with a new rear air suspension, which has automatic and manual leveling functions. There are three different settings – Low, Normal and High – and Low helps for loading and unloading the bed, while High is designed for off-roading at speeds up to 18 mph (29 km/h).

Engineers didn’t just focus on the rear end as the front features a new double wishbone suspension with a “kingpin offset angle reduction to enhance straight-line stability and high-speed driving.” The caster trail has also been enlarged for added stability, while roll steer was reduced by 25%.  The company also said body roll has been reduced, especially when cornering.

Last but not least, the Tundra can be equipped with an Adaptive Variable Suspension. It automatically adjusts damping depending on road conditions and this helps to improve handling, stability and comfort. Furthermore, Limited and above trims use hydraulic cab mounts for an extra dose of refinement. 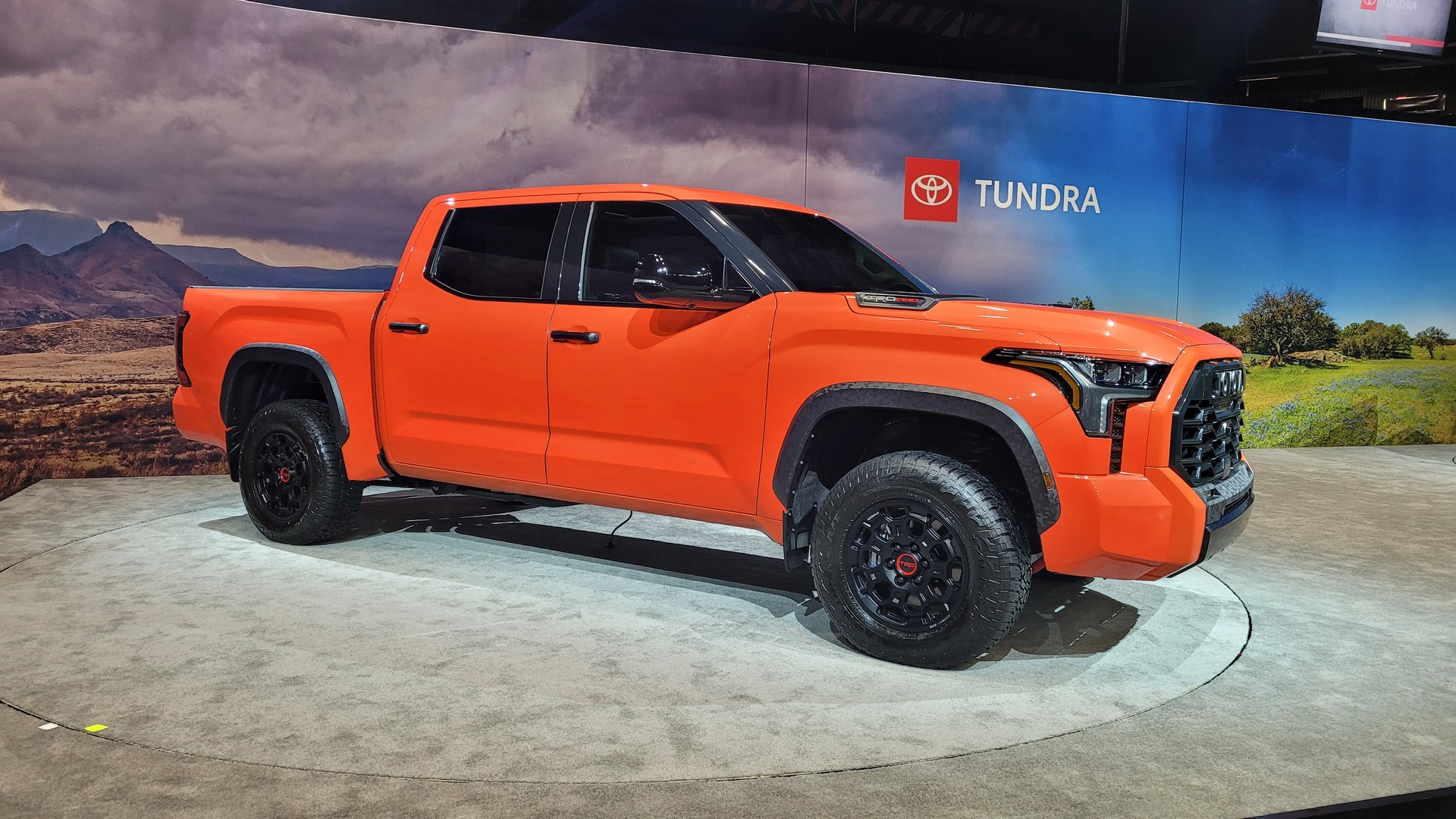 While the company hasn’t released a detailed equipment list, all 2022 Tundras will come with the Toyota Safety Sense 2.5 suite of driver assistance systems. It includes a pre-collision system with pedestrian and cyclist detection as well as emergency steering assist.

The 2022 Toyota Tundra will be available in six trims – SR, SR5, Limited, Platinum, 1794 and TRD Pro – and will go on sale late this year. In the meantime, we have plenty more to say about the truck, so be sure to check out our other articles on the TRD Pro and the all-new infotainment system.