This is the new 2022 Ford Bronco Raptor, now the most powerful street-legal Bronco on offer. Of course, it’s not all about power and speed, as the Blue Oval’s official Baja-inspired take on the popular Bronco resurrection is designed to attack sand dunes just as well as it handles tarmac miles. It’s said to be the first Ultra4-Racing-inspired SUV, the off-road racing series marketed as the most demanding one-day off-road race on the planet.

And it certainly looks the part, with the unique bodywork making the uprated SUV instantly discernible from the base model. However, as with the rest of the Raptor line-up, this is much more than just a dressing up: there’s an expansive list of upgrades applied to the Raptor under the skin.

The latest edition to the Raptor range is powered by a 3.0-liter V6 EcoBoost engine with a graphite iron-block engine. Unlike aluminum blocks, iron ones are typically more durable, even if they usually carry a weight penalty. Ford says it’s targeting over 400 hp ( 303 kW / 405 PS), although official SAE power and torque figures are yet to be revealed. That’s compared with 330-hp for the current top offering powered by a 2.7-liter turbocharged V6. The Raptor’s V6 is aided by intercooling and air-induction systems designed to endure the higher ambient desert temperatures.

Power is transmitted to the road via a 10-speed gearbox, similar to the one found in the F-150 Raptor and Ranger Raptor. The four-wheel drive system will feature seven different “G.O.A.T” modes for off-road exploration. Included is a new Baja mode that actives a turbo anti-lag system. With pops and crackles guaranteed, it’s designed for “high-speed desert runs,” although we can see owners using it to disturb the peace every now and again too.

But for those wishing to keep a low profile, the Bronco Raptor will also feature four selectable exhaust modes, including a quiet mode for flying under the radar (and not waking up the neighbors). The exhaust itself features near-equal-length headers, for what Ford describes as an improved exhaust note.

As you’d expect for anything bearing the Raptor moniker, the Baja-inspired SUV sees a fair amount of work carried out to the chassis. Agility is improved with new shock towers that increase wheel travel. These are aided by new Ford Performance control arms, which enables the Bronco Raptor to achieve 13 inches (33 cm) of wheel travel in the front and 14 inches (35.5 cm) in the rear. Also included are larger-diameter inner and outer tie rod ends.

As far as the suspension is concerned, the Bronco Raptor featuring a set-up similar to the F-150 Raptor. The FOX dampers are internal bypass and semi-active, monitoring the height of each wheel hundreds of times each second. They’ve been tuned specially for the new platform, with integrated reservoirs up front and remote reservoirs at the rear.

Moreover, there are heavy-duty bash and skid plates protecting the underside continuously from the front bumper to the rear of the engine, transmission, and transfer case. Meanwhile, the chassis sees reinforcement at the B-pillar crossbar and the C-pillar, with a 50 percent increase in total body-in-prime torsional rigidity.

The 2022 Raptor Bronco employs competition-level drivetrain components, including axles from Dana (semi-float 50 AdvanTek at the rear and 44 AdvanTek at the front), as well as upgraded half shafts. The track is widened by 8.6 inches (21.8 cm) to 73.6 inches (187 cm), while ground clearance is increased by 4.8 inches (12 cm) over the standard Bronco.

Further setting the Raptor apart from the base Bronco is an improved 4×4 system with a higher-capacity clutch that’s able to withstand the demands of high-performance desert events. There are also Raptor-specific reinforced rock rails with removable running boards that increase rock-crawling capability.

Read More: Next Up Is The 2023 Ford Ranger Raptor 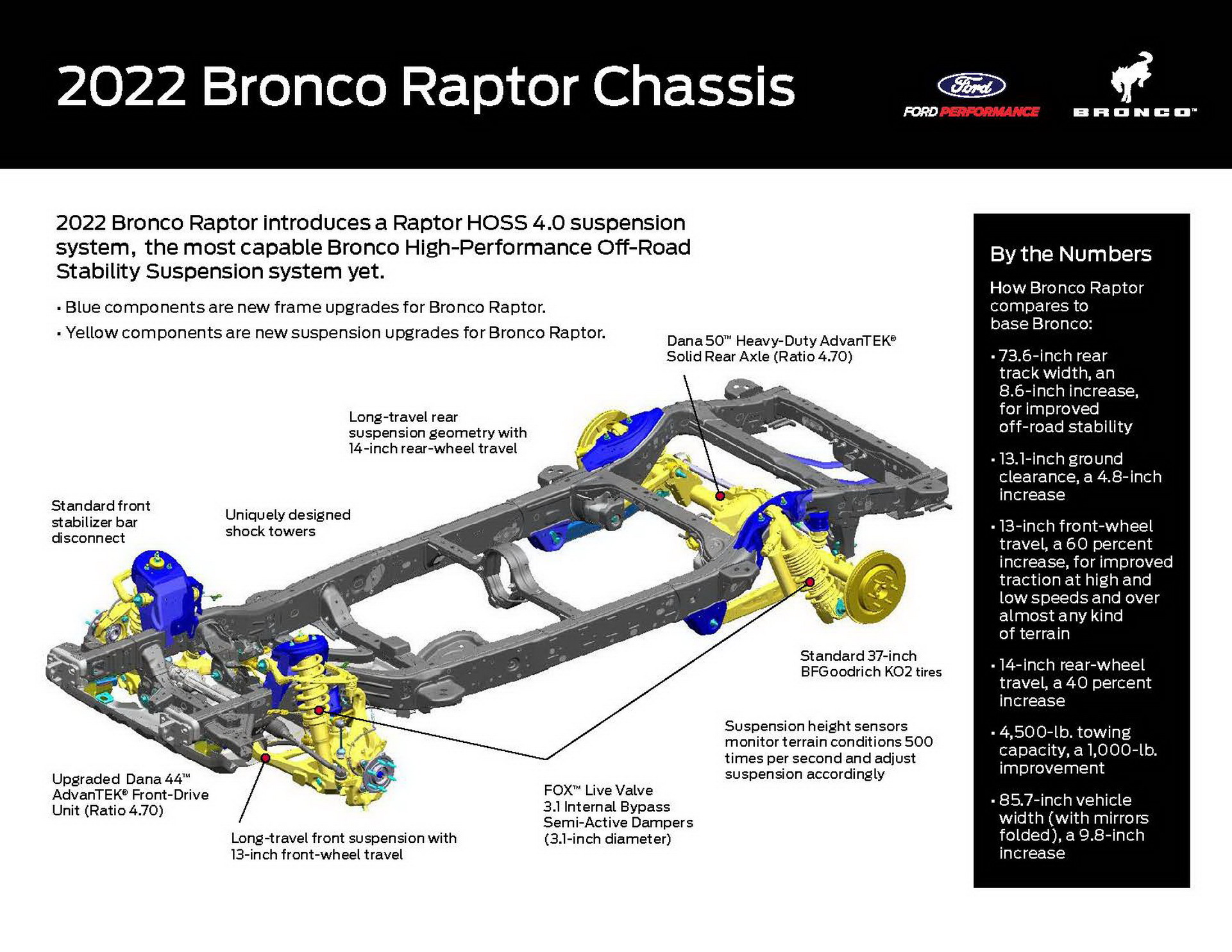 Leaving no stone (or rock) unturned, the transfer case has been beefed-up too, with a 3.06 low-ratio for up to 67.7:1 crawl. There are also larger front and rear driveshafts to support the added torque from the more powerful engine.

For those attempting trails, Ford has added a one-pedal driving mode to the Bronco Raptor. Also improved is the SUV’s towing ability, as a new Tow/Haul mode enables the Bronco to pull 4,500 pounds (2,041 kg), which is 1000 pounds (454 kg) more than the standard car.

Looks as good as it goes

Ford is calling the Raptor its “most badass Bronco yet,” and from just looking at it, you can tell that enough Raptor DNA has been injected to make the new SUV certifiably muscular.

There’s a heavy-duty steel front bumper with removable end caps for better clearance, as well as integrated tow hooks. The front and rear quarter-panels, fenders, fender flares, and door appliques are all unique to the Raptor version, and contribute to making the car 9.8 inches (25 cm) wider. The front fenders, which are sheet-molded, include vents that aid cooling to the engine. The hood also features added cooling ducts, with a power bulge for an added touch of menace to the appearance. 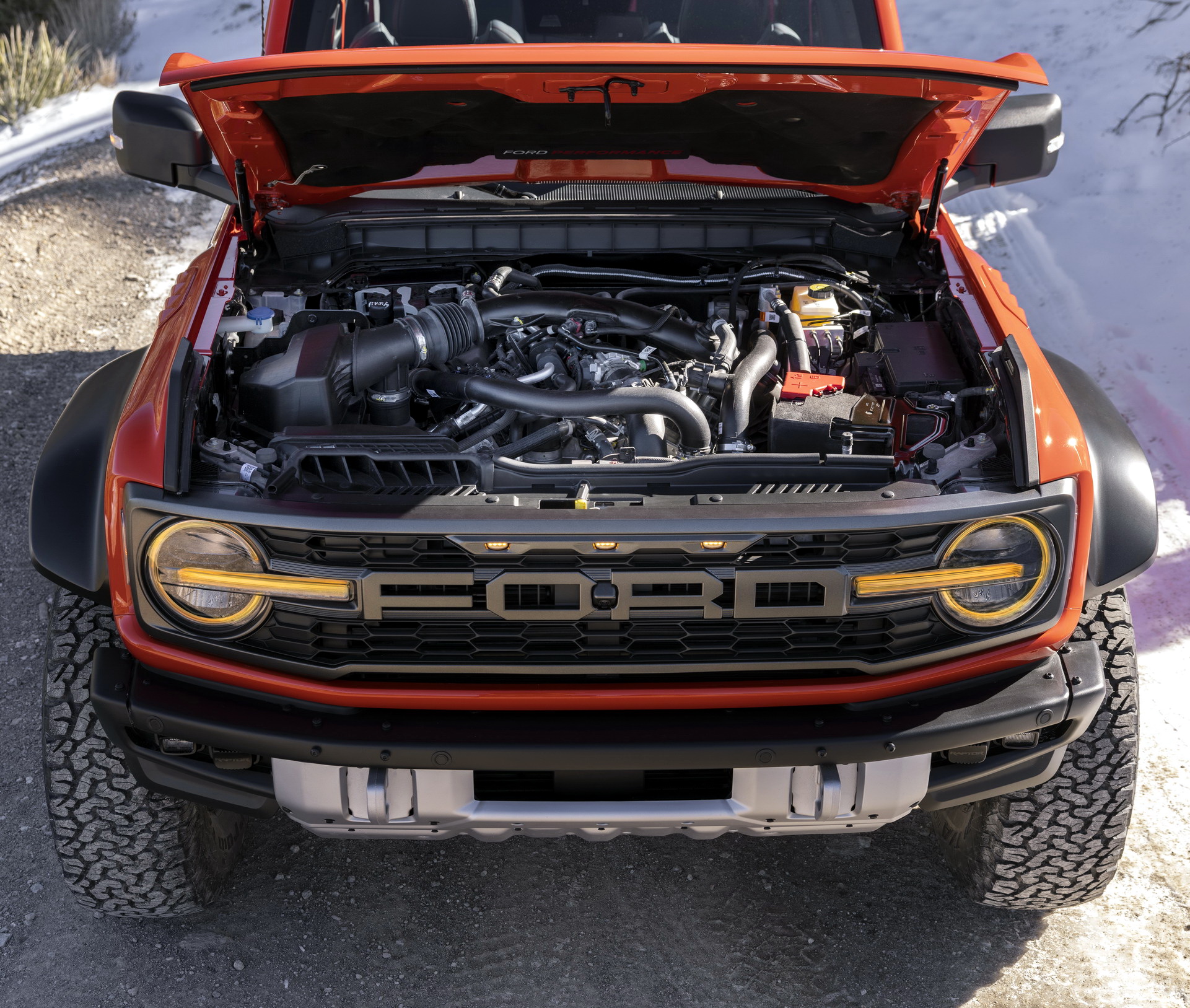 Fitting under those arches are standard-from-factory 37-inch all-terrain tires from BF Goodrich. The KO2 all-terrain tires are claimed to be the largest available of any production SUV in the U.S. These can be specced with two designs of 17-inch diameter, 8.5-inch width rims with beadlocks.

Of course, all these visual tweaks aren’t nearly enough to scream “Raptor,” so, in case buyers have any doubts about the SUV’s identity, a range of Bronco Raptor graphics are available. These can be coupled with 10 different exterior colors, including the Ford-Performance exclusive Code Orange. 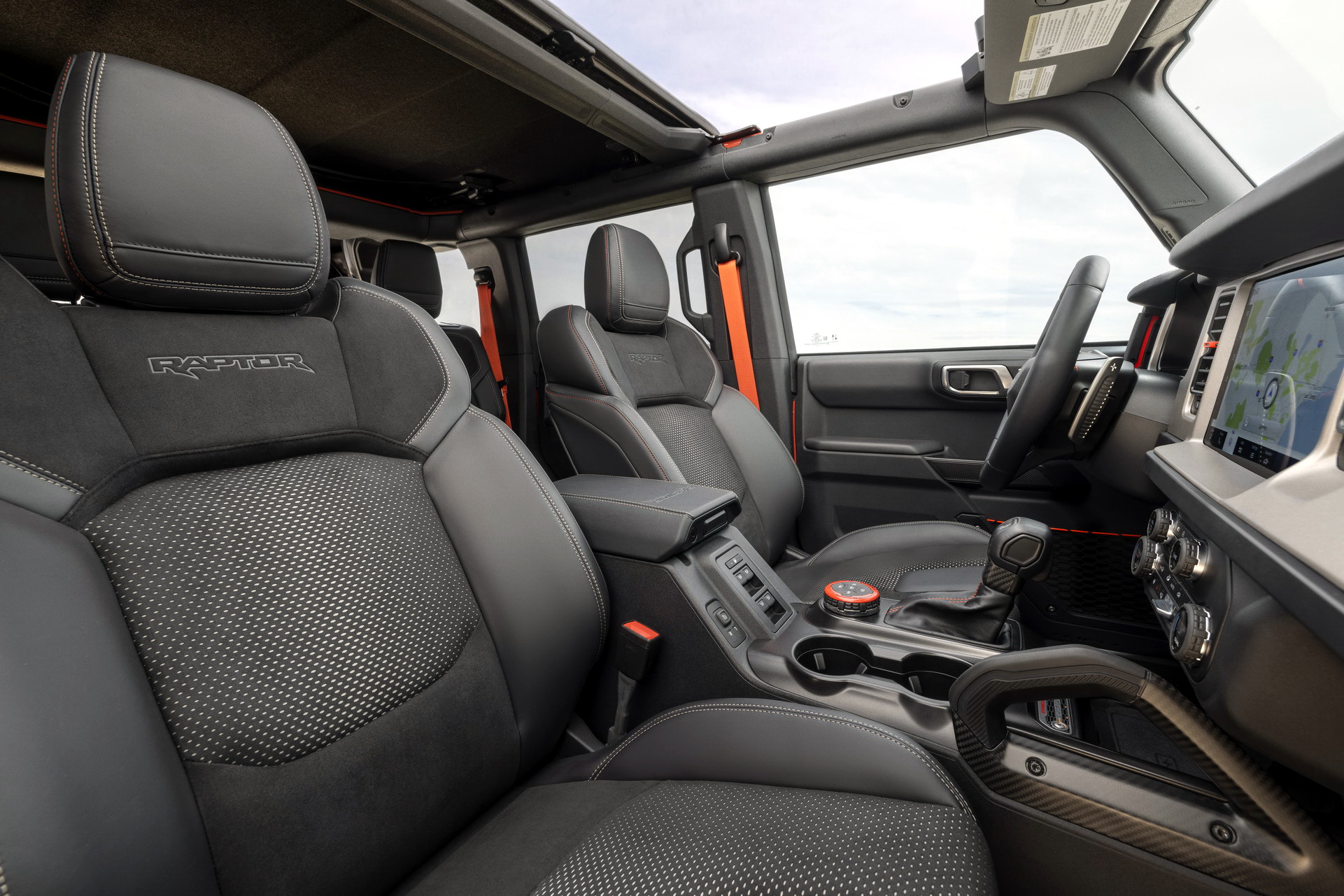 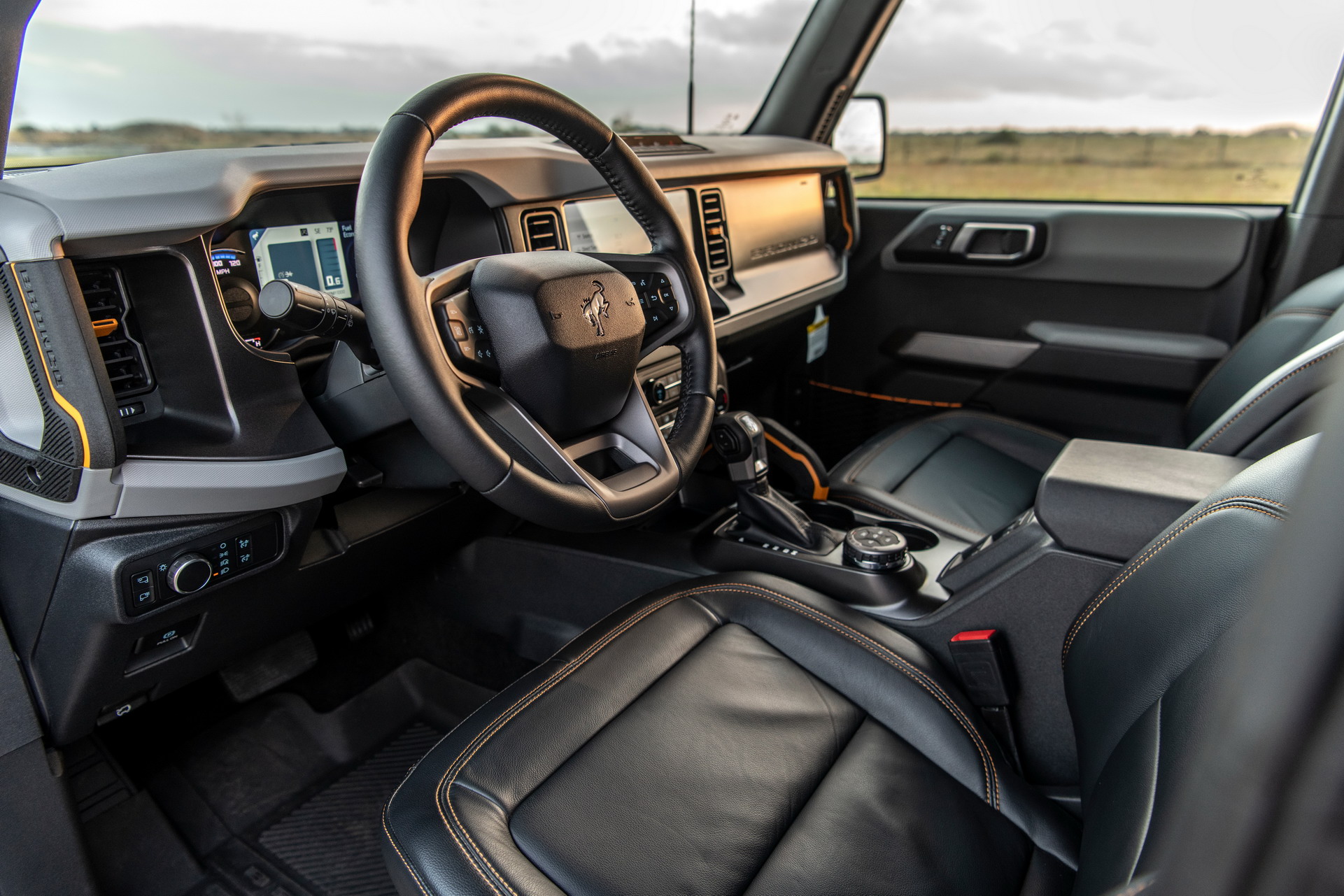 Code Orange can also be found in the interior if the optionally bright seatbelts are specced. Standard splashes of orange feature throughout the interior, which features standard vinyl seats. Black Onyx “Neo Suede” seats are optional, as is a thicker sport steering wheel and carpet flooring. There’s the added option of Ford Performance-designed front seats, too, which sport aggressive side bolsters. 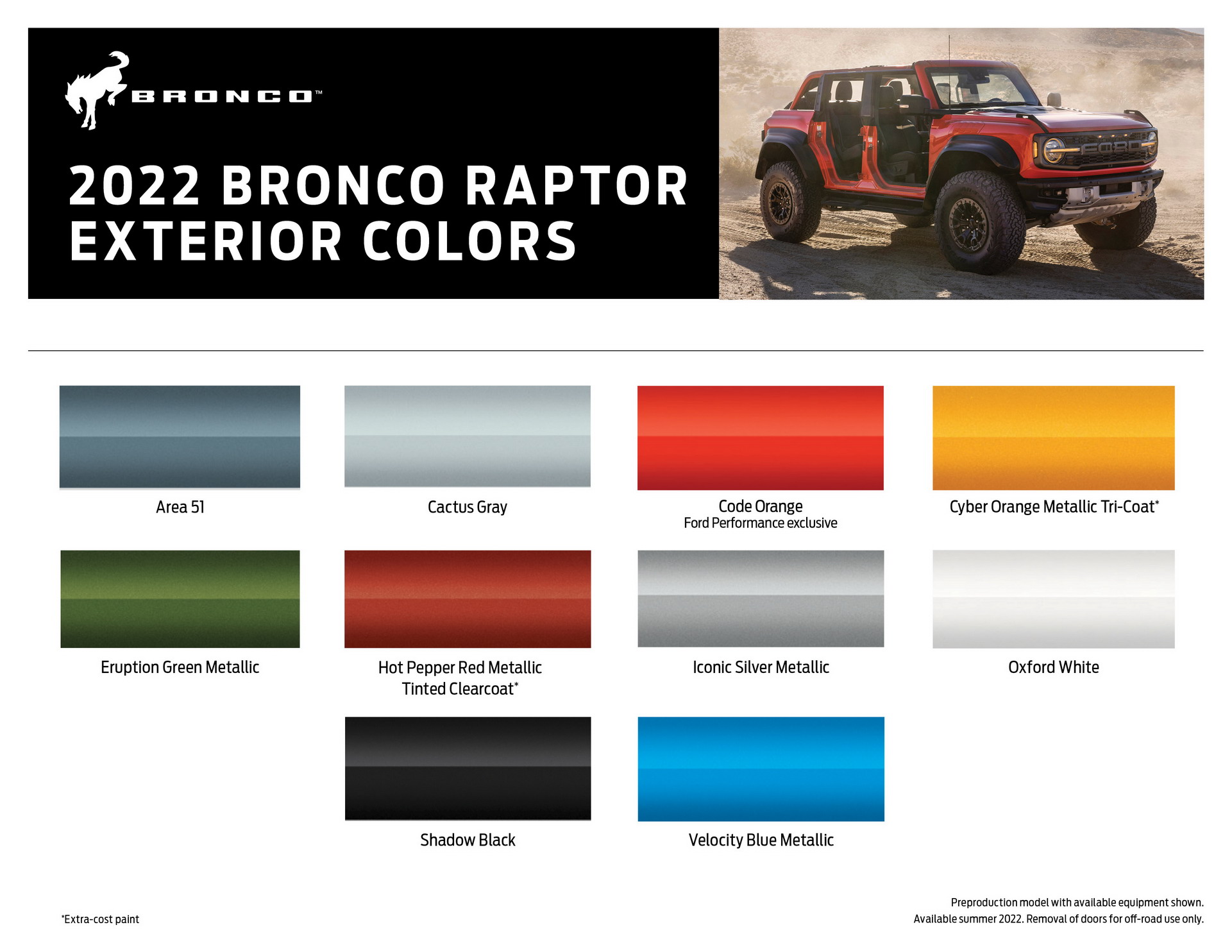 Ford will open order books in March 2022. However, most of the 2022 model year allocations will go to existing reservation holders. Pricing for trim levels and individual options are yet to be announced, but the 2022 Bronco Raptor will start at $68,500 plus $1,495 for destination and handling for a total of $69,995.

That’s more than double the price of the base 4-door Bronco ($33,785) and a whopping $20,000 jump up from the 4-door Bronco Wildtrak ($47,780) and leaves room for a much heftier final tag once spec’d – not to mention any Raptor-size markups over MSRP from dealers.  It’s a steep, if not completely unexpected premium, while the Raptor will also be offered with a three-year/36,000-mile warranty.