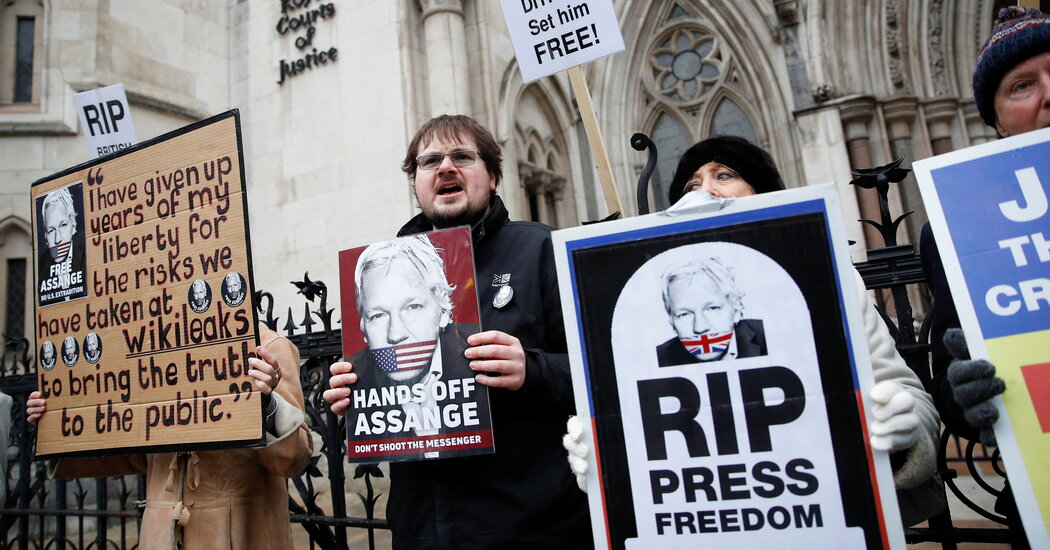 LONDON — A British court ruled on Monday that the WikiLeaks founder Julian Assange can appeal a decision that would allow for his extradition to the United States to face charges under the Espionage Act in connection with obtaining and publishing secret government documents.

The latest twist in the long-running case comes after a decision last month that he could be extradited to the United States to face the charges, a reversal of a lower-court decision.

The decision to extradite Mr. Assange has turned on whether prison conditions in the United States during his detention would be too harsh for his mental health, which his lawyers argue has grown increasingly fragile.

Last year, a lower court judge in Britain rejected the extradition request, saying Mr. Assange might be driven to suicide if he was held at the highest security prison in the United States. But last month, Britain’s High Court said that it was satisfied by assurances made by the Biden administration that Mr. Assange would not be held in this facility, and if convicted, he might be allowed to serve his sentence in his native Australia if he requested that.

The charges against Mr. Assange stem from the 2010 publication of diplomatic and military files on his website, WikiLeaks, after they were leaked by Chelsea Manning, a former Army intelligence analyst.

The indictments, which were handed down during the Trump administration, accuse Mr. Assange of participating in a criminal hacking conspiracy by offering to aid Ms. Manning in covering her tracks and also encouraging hackers to obtain and send secret material.

They also accuse him of violating the Espionage Act by soliciting and publishing secret information, charges that could raise profound First Amendment issues.

The trial is playing out in a British courtroom after Mr. Assange spent years holed up in the Ecuadorean Embassy in London, fleeing there in 2012 as he faced an investigation on accusations of sexual assault in Sweden. Those charges were eventually dropped.

He was ejected from the embassy in 2019, and on the same day, the United States unsealed an indictment against him on hacking charges. Weeks later, he was charged under the Espionage Act, and has been detained in Belmarsh prison in London since 2019.