Skoda has fully unveiled the new generation of the Fabia Rally2 following an extensive period of development. The rally car, based on the fourth generation of the supermini that debuted last year, comes with a beefy aero package, handling and safety improvements, plus a newly developed engine. Unfortunately, a homologation special is out of the cards so don’t expect any hot hatch variants of the Fabia to rival the Toyota GR Yaris.

Starting with the exterior, the new rally car looks beefier than any Fabia before it – maybe with the exception of the first-gen Fabia WRC. Changes compared to the road-going Fabia include the wide front and rear fenders, a deeper front bumper with a splitter, a vented bonnet, a roof scoop, new side skirts, a redesigned rear bumper and a massive rear spoiler. The lights have LED technology while a pair of vRS badges are fitted on the black grille and on the tailgate. 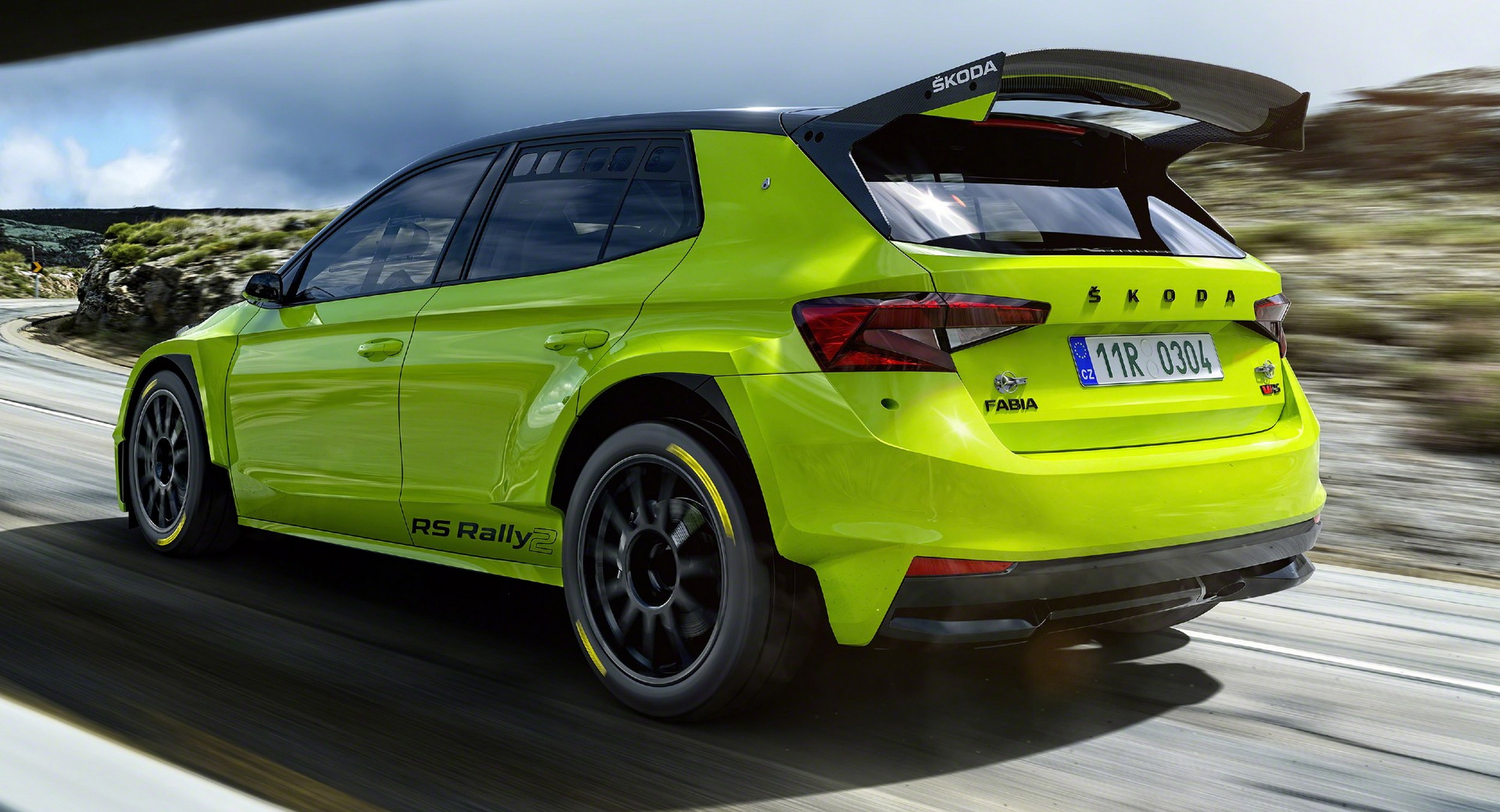 The Hyper Green exterior shade is reminiscent of the fully electric Enyaq Coupé iV vRS and looks great in combination with the black wheels and accents. The pictured vehicle is in the more eye-catching asphalt configuration with the multispoke 18-inch wheels shod in wide tires, instead of the gravel-spec 15-inch wheels or the thinner studded tires for snow and ice.

Thanks to the extensive aero modifications on the sleek body of the production model that is the most aerodynamic in the supermini segment, the new Skoda Fabia Rally2 generates almost double the downforce compared to its predecessor. Skoda says they didn’t include active aerodynamics such as the active louvres of the production model since it’s not permitted by the Rally2 regulations. 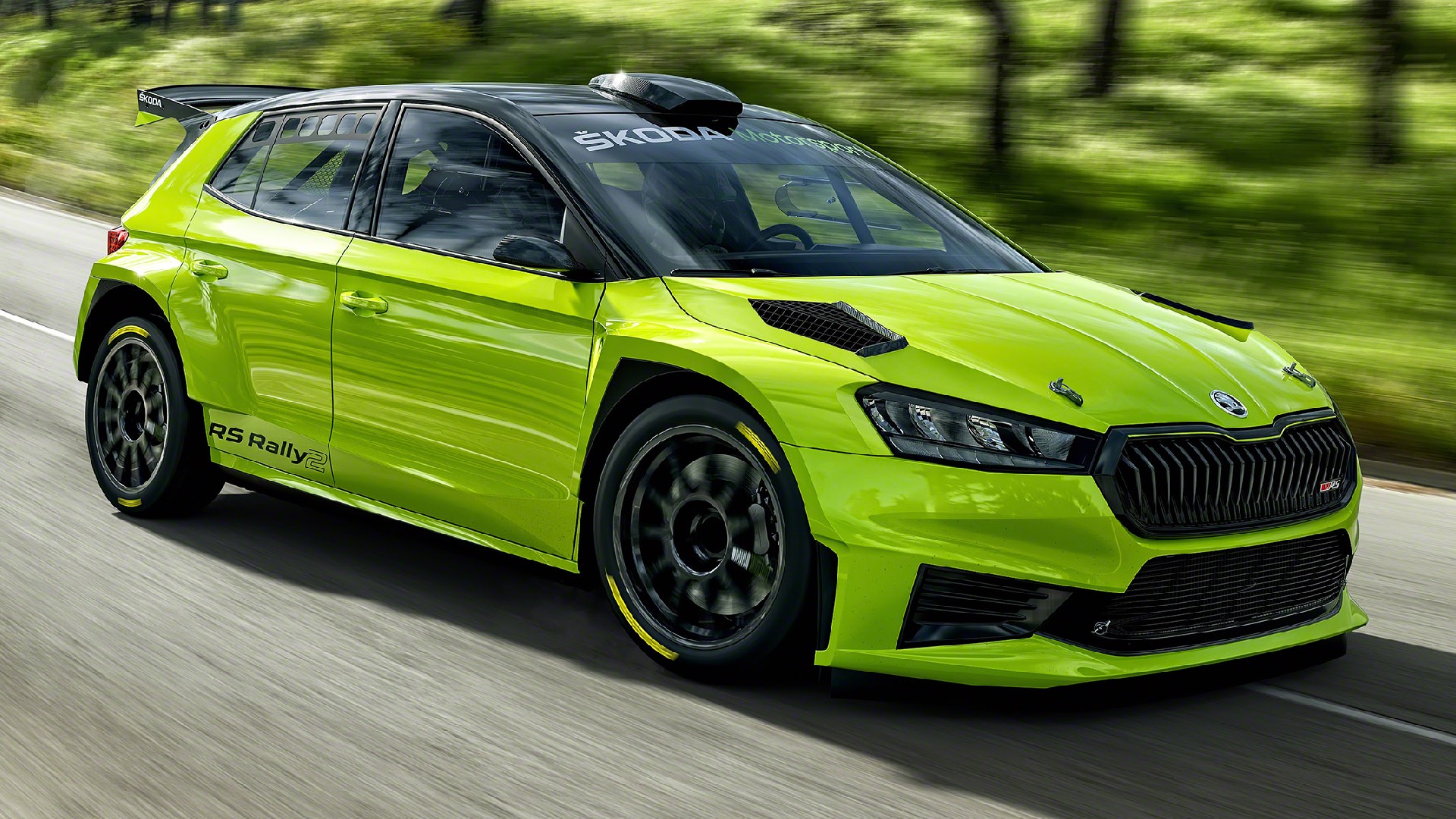 Under the bonnet lies a new turbocharged 1.6-liter four-cylinder engine based on the larger 2.0 TSI from the Skoda RS production models. The mill produces 289 hp (214 kW / 291 PS) and 430 Nm (317 lb-ft) of torque. Power is transmitted to all four wheels through a sequential five-speed gearbox with the help of mechanical front and rear differentials (a center differential is not permitted in the Rally2 series). Skoda didn’t announce the acceleration figures, but the top speed is limited to 200 km/h (124 mph) due to the short gear ratio. The engine is using sustainable petrol in line with the FIA World Rally Championship (WRC) regulations with the goal of promoting biofuels.

The suspension features MacPherson struts with longer travel and an optimized setup for each rally stage. The braking setup is also different depending on the terrain, with the internally ventilated brake discs measuring 355 mm (14 inches) at the front and 300 mm (11.8 inches) on asphalt, or 300 mm (11.8 inches) all around on gravel. 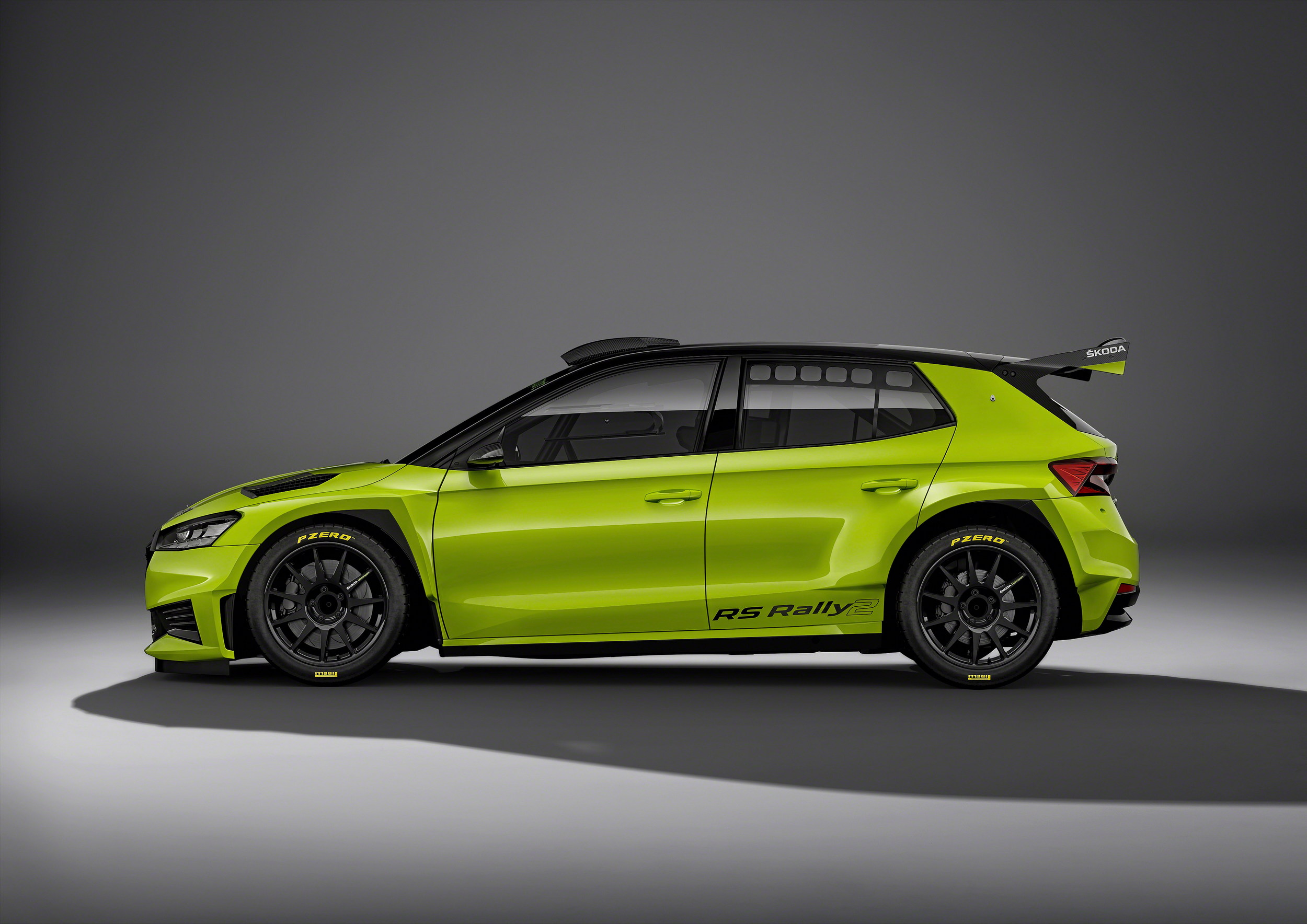 Inside the cabin, we find racing buckets with six-point harnesses and the head-and-neck support system. The driver has now access to a new central control panel with a touch screen, while many functions can be accessed from the buttons on the steering wheel, including the start/stop.

The polycarbonate side windows can be easily removed in the case of an accident, while an automatic fire extinguishing system makes sure the driver and the co-driver remain protected. We also find a new FIA-approved roll cage made of high-strength chromium-molybdenum steel, which is an integral part of the bespoke chassis resulting in significantly increased torsional rigidity. Finally, Skoda engineers added a new kind of side-impact protection made of carbon fiber, Kevlar, and energy-absorbing foam.

The Skoda Fabia Rally2 will compete in the next season with private teams against the likes of the Hyundai i20 Rally2, the Citroën C3 Rally2, and the Ford Fiesta Rally2. As we mentioned earlier, Skoda is not keen on bringing a hot hatch vRS variant of the Fabia into production, leaving the Fabia Monte Carlo with the 1.5 TSI engine producing 148 hp (110 kW / 150 PS) at the top of the range.