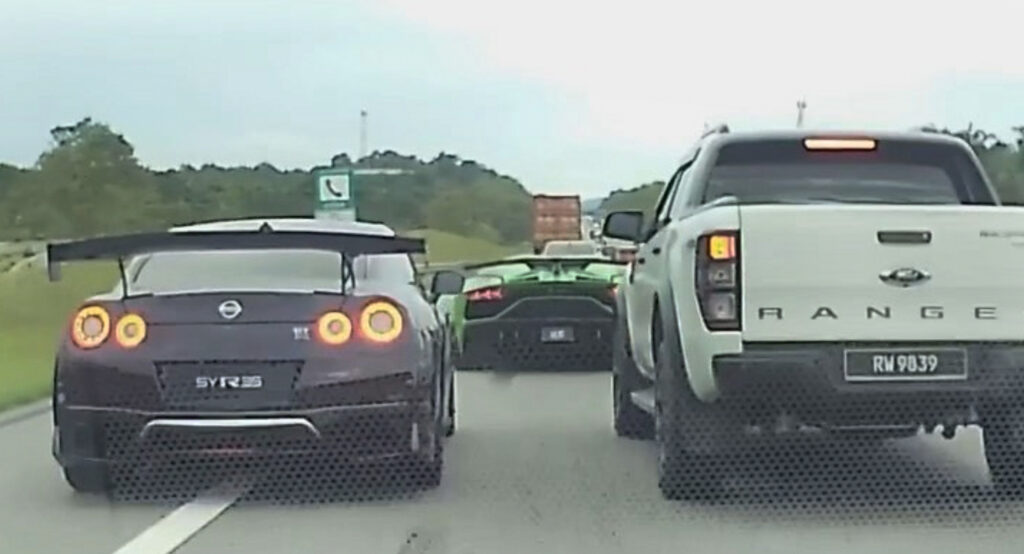 Road rage can be a dangerous thing, as you often don’t know how severe the intentions of the person committing it are. Sometimes it can be as harmless as an offensive gesture, but in the case of this belligerent Ford Ranger driver, it involved trying to wreck no less than three supercars.

The video begins with the Ranger trying to run into the Nissan GT-R to his left, but the GT-R’s driver was thankfully able to avoid him by moving off to the side of the road. Once he was positioned squarely in the left lane, the Ranger driver then attempted to merge directly into the other GT-R on the other side of him.

Read More: Bizarre Stunt Sees Woman Exit Her Car In The Middle Of The Road, Lets It Roll Into Oncoming Traffic

Luckily, that GT-R’s driver had just enough room to tuck behind the car to his right, and he was able to avoid damage. However, the Ranger driver’s rampage didn’t end there, as his next target was the Lamborghini Aventador SVJ in front of him. Now splitting two lanes, he accelerated forward, and despite the Lamborghini driver’s best efforts to move off to the road’s shoulder, the Ranger driver slammed directly into the side of him. The aftermath shows a whole fleet of supercars, likely associated with the ones in the wreckage, stopped on the road to assess the situation and hold the Ranger driver accountable for the damage he caused.

The video doesn’t show us what happened before the incident, but even if the supercar owners did something to annoy the Ranger driver, that doesn’t give him the right to use his truck as a battering ram, regardless of the value of the cars he’s smashing into. According to the Instagram post, the driver of the Ranger was reportedly drunk, however nothing is known for certain, and that still doesn’t justify his actions.