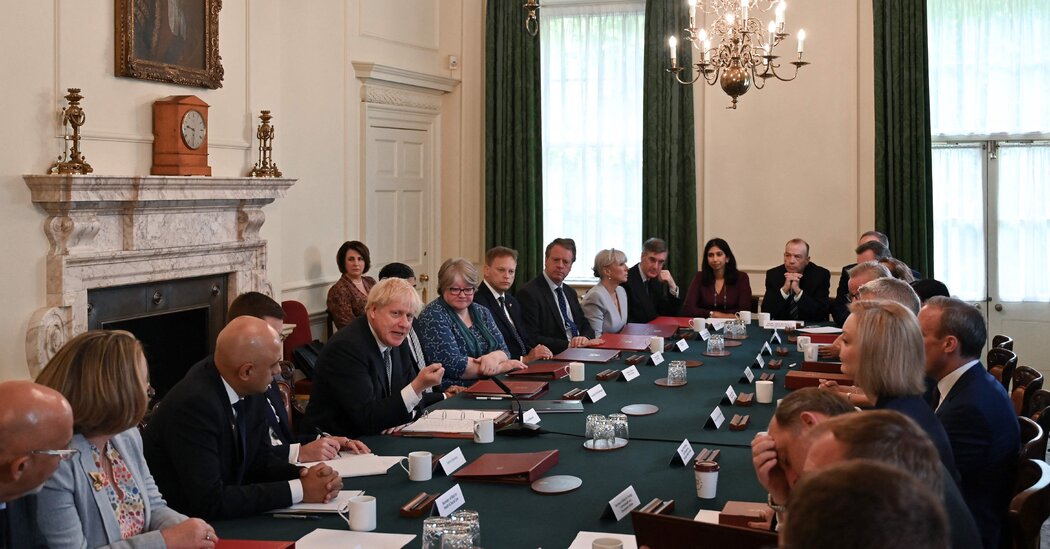 LONDON — Late Wednesday night, Prime Minister Boris Johnson of Britain was defiant, refusing to quit, rejecting entreaties from cabinet colleagues who told him the game was up and even sacking one of them, Michael Gove, a friend and rival since their days together at Oxford University.

Despite everything stacked against him, Mr. Johnson did not go quietly. So the blows kept coming.

Simon Hart, the Welsh secretary, was next to quit and, speaking on TV, the attorney general, Suella Braverman, not only called for Mr. Johnson to go, but also declared herself a candidate to succeed him.

By the end of Wednesday, dozens of ministers or senior aides had resigned from government in an the exodus that threatened to cripple decision making in several government departments.

Yet the resignations continued. By breakfast time, the line from Downing Street that Mr. Johnson was at his desk, working on how to reshuffle his top team, was no longer credible. There were too many jobs vacant and too few loyalists to fill them.

Early Thursday, another cabinet minister, Brandon Lewis, the Northern Ireland secretary quit, saying that things were “now past the point of no return,” and adding,: “I cannot sacrifice my personal integrity to defend things as they stand now.”

But it seems Mr. Johnson finally got the message when even those he had recently promoted turned on him. Less than 48 hours after he became chancellor of the Exchequer, Nadhim Zahawi, demanded that the prime minister who gave him the job stand aside.

Then the cabinet’s newest member, Michelle Donelan, who had been appointed to replace Mr. Zahawi in his previous role as education secretary, resigned from her new position.

Not long after, word came from Downing Street that Mr. Johnson had acknowledged what had been evident for some time — that his time in that building was coming to an end, and that he would speak to the nation later on Thursday.