The 2024 Chevrolet Blazer is a crucial car for the bowtie team. The firm’s first ever electric SUV has to prove it can cut it against the mighty Tesla Model Y in a fast-growing EV segment that’s also contested by the Ford Mustang Mach-E and Volkswagen ID.4.

Chevy hasn’t released full mechanical details for the Blazer, which is available in 1LT, 2LT, RS and SS trim, but we do know how much the four models will cost, and how far each of those trim grades can travel on one charge. And we also know the size of its infotainment screen. Don’t laugh – those three facts will help many potential buyers decide whether or not to pick the Blazer over its rivals. Let’s quickly run through the key details of the 2024 Blazer and then see how the top- and bottom-spec versions stack up against their rivals.

The Blazer starts at $44,995, which buys you an entry level 1LT with a single motor and front-wheel drive. LED lights and 19-in wheels are standard on the 1LT, as is the 17.7-inch infotainment screen and 190 kW DC fast charging capability you’ll find on the flagship SS. But the base car misses out on the illuminated bowtie grille badge, heated seats, and rear- and all-wheel drive options available on more expensive models. 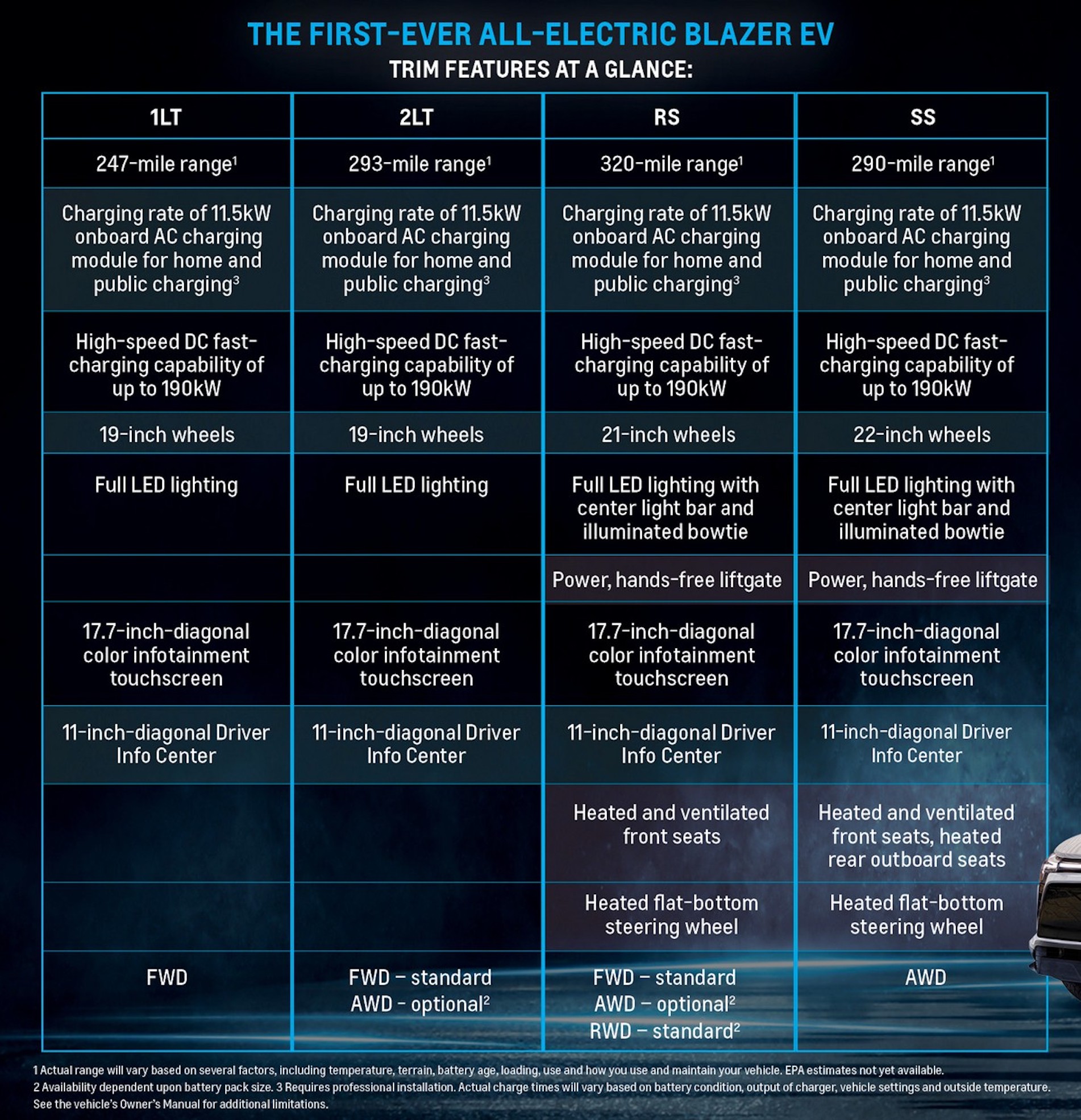 Those pricier Blazers also get a bigger battery (GM isn’t saying how much bigger), meaning the 1LT has the shortest electric range in the Blazer lineup. It can do around 247 miles (398 km) on a charge, while a 2LT with the optional battery has a range of 293 miles (472 km). One of the three available powertrain combos for the RS (we’re guessing the RWD with the bigger battery) can travel 320 miles (515 km) before needing to be tethered to the mains, and the SS, which comes standard with all-wheel drive and is Chevy’s answer to the Mustang Mach-E GT, is good for 290 miles (467 km). 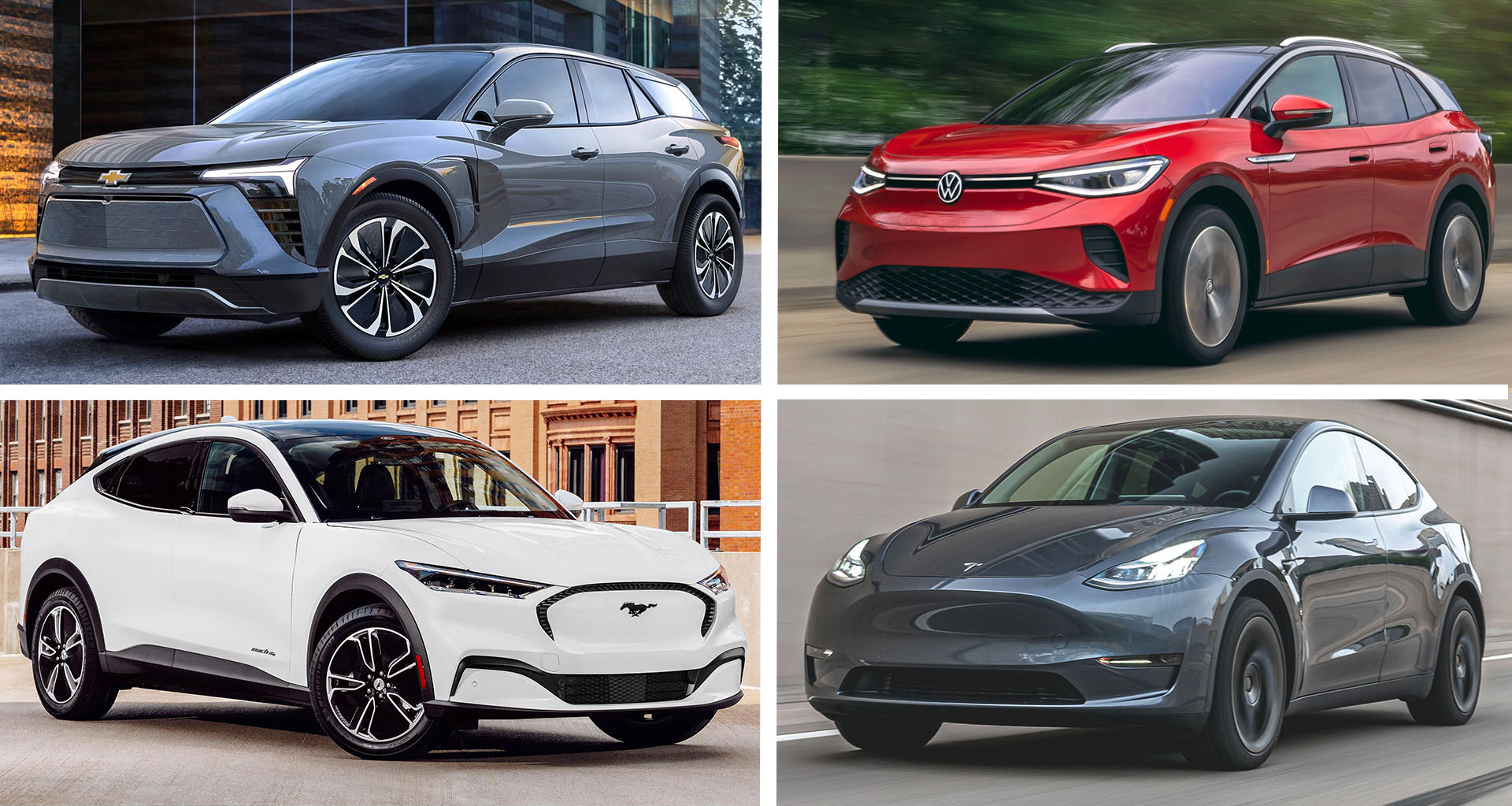 The entry-level Blazer 1LT has a $44,995 MSRP, which makes it fractionally more expensive than the base Ford Mustang Mach-E ($43,895) and significantly more costly than the bottom-rung Volkswagen ID.4 Pro ($41,230), which will soon be joined by an even more affordable model with a smaller 62 kWh battery. Tesla doesn’t have a comparable car in the U.S., the Model Y only being available in North America with dual motors and all-wheel drive, although Australians can pick up a single-motor, rear-drive version for AU$72,300 ($49,500 USD).

So the base Model Y for the U.S. is the Long Range, which costs $65,990. It’s also worth noting that neither the Chevy nor the Tesla are eligible for federal tax credits, and Ford is about to run out of credit allocation, which makes the VW the biggest bargain here and one you can buy now: the base Blazer won’t be in showrooms until early 2024, months after the other trim grades. 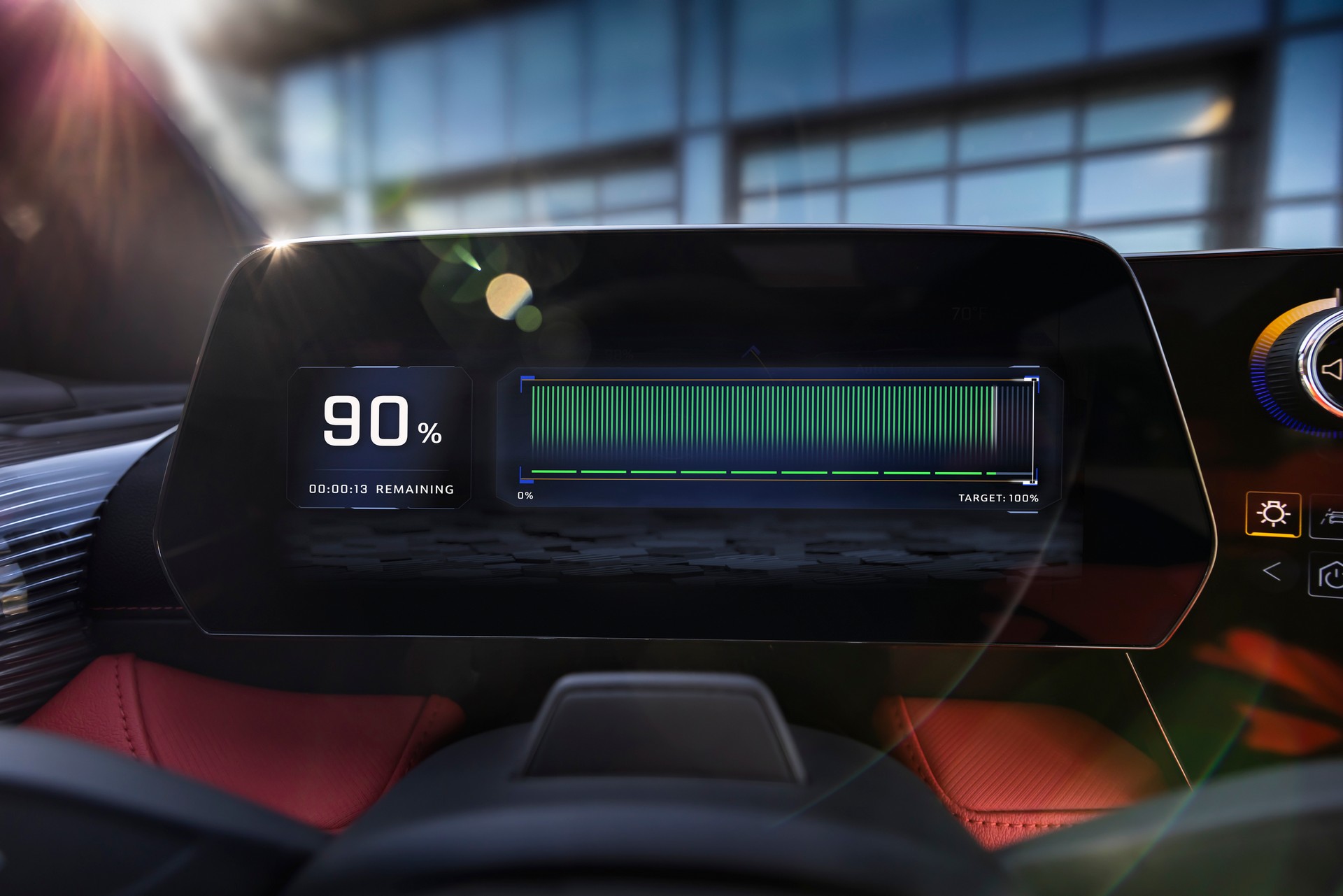 Chevy says you’ll be able to travel 247 miles (398 km) in the base 1LT, which perfectly matches Ford’s figure for the entry-level Mach-E. Both cars are significantly out-performed here by the ID.4 Pro, which the EPA has rated at 275 miles (443 km).

But the VW sticks to its 82 kWh battery even at high trim levels, meaning the further you climb up the range, the lower the EV range drops. A loaded all-wheel drive Pro S is only rated at 245 miles (394 miles), whereas the leggiest Blazer, the two-wheel drive RS, can travel for 320 miles (515 km). Ford’s rangiest Mach-E mates the 88 kWh long range battery with a rear-drive, single-motor setup and is good for 303 miles (488 km), but the Tesla Model Y Long Range trumps them all with a claimed 330-mile (531 km) range. 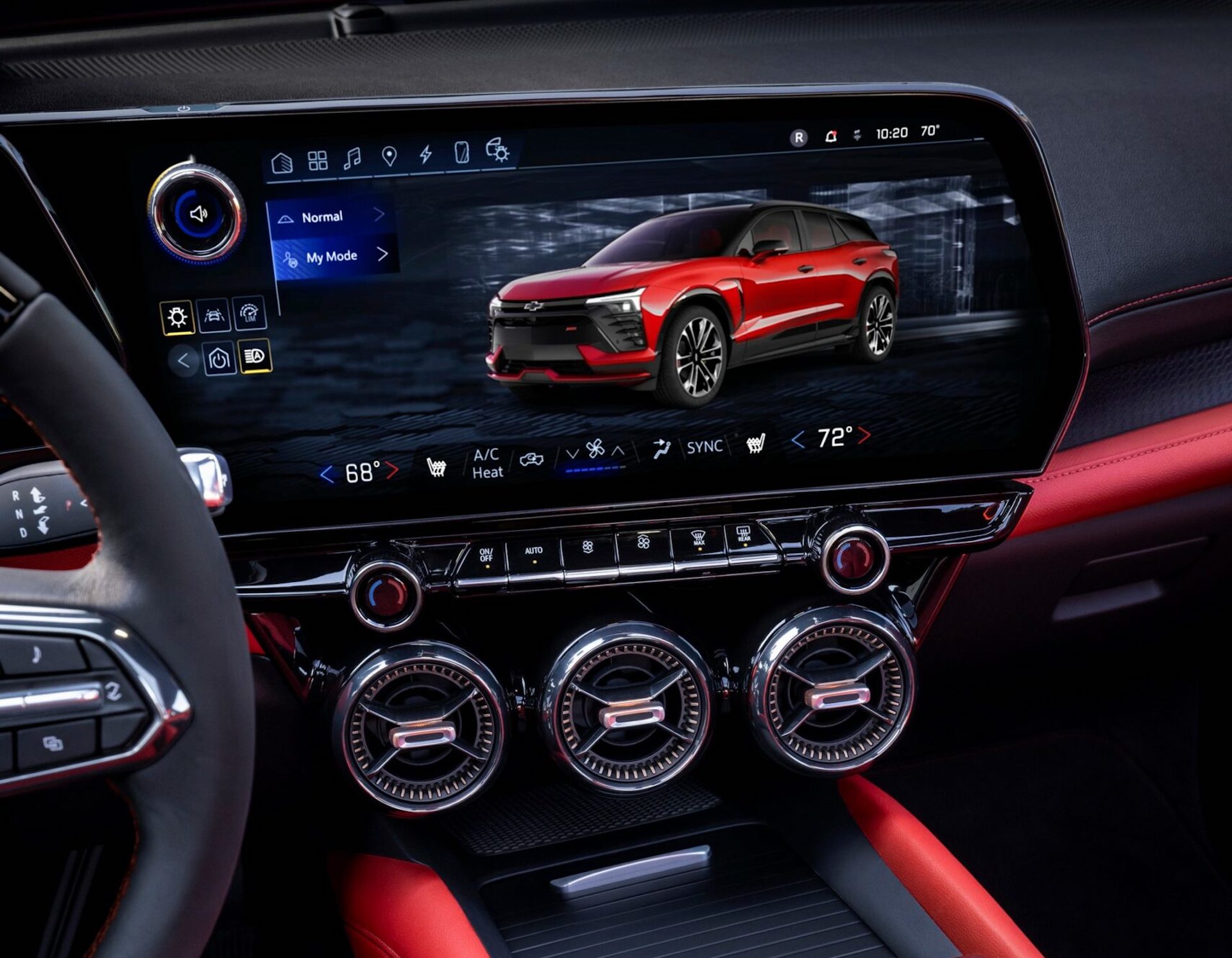 One of the great things about the Blazer and Mach-E is that Ford and Chevy don’t force you to buy an expensive model to get a wowser interior. Okay, so the base Blazer and Mustang miss out on the heated seats and steering wheel that come standard on the lowliest VW ID.4, but they both get the same big infotainment screens you’ll find in top-end cars. 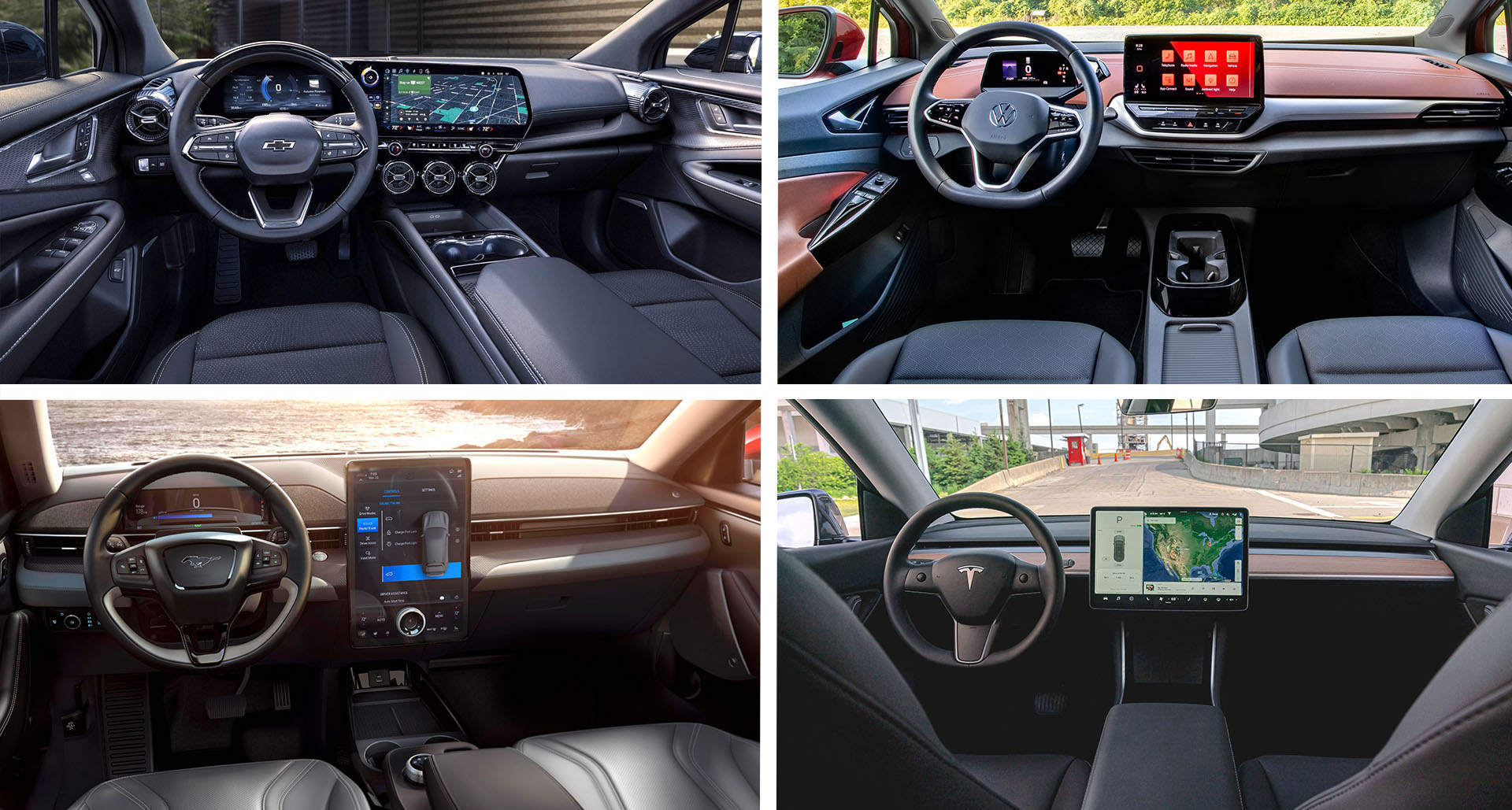 And of the two, it’s the Ford’s portrait display that’s actually the smallest. It measures 15.5-inches, which is 2.2-inches smaller than the landscape screen fitted to the Blazer, though 0.5-inches bigger than the screen in the Tesla Model Y and more than 50 percent bigger than the one in the entry level Volkswagen. Base ID.4s make do with a puny 10-inch touchscreen, and even higher spec Pro S cars don’t get more than 12-inches of digital real estate. 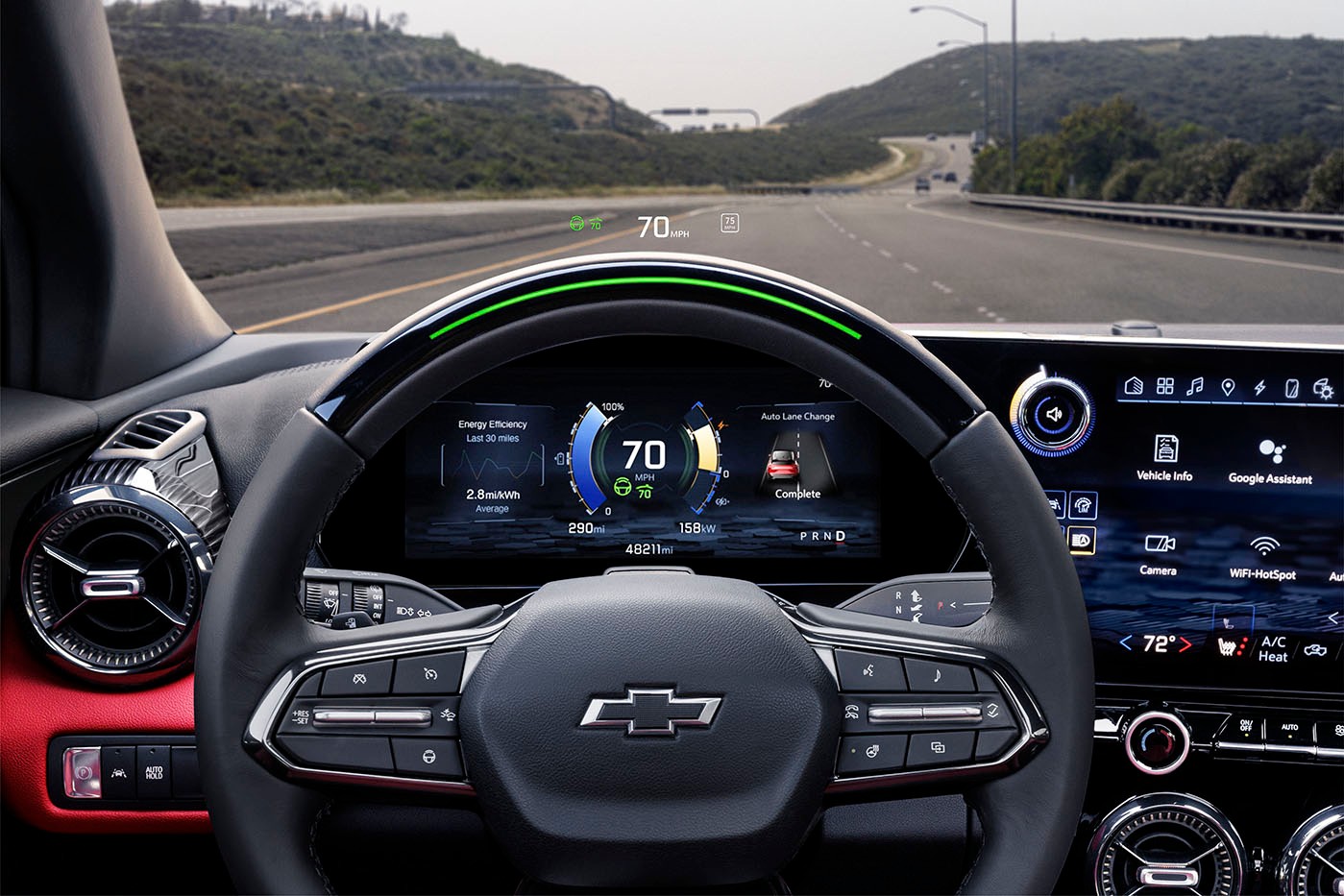 And while we’re talking digital displays, it’s worth mentioning that every Blazer gets a 11-inch configurable instrument pack that’s bigger than those in its rivals, no matter how much money you throw at them. 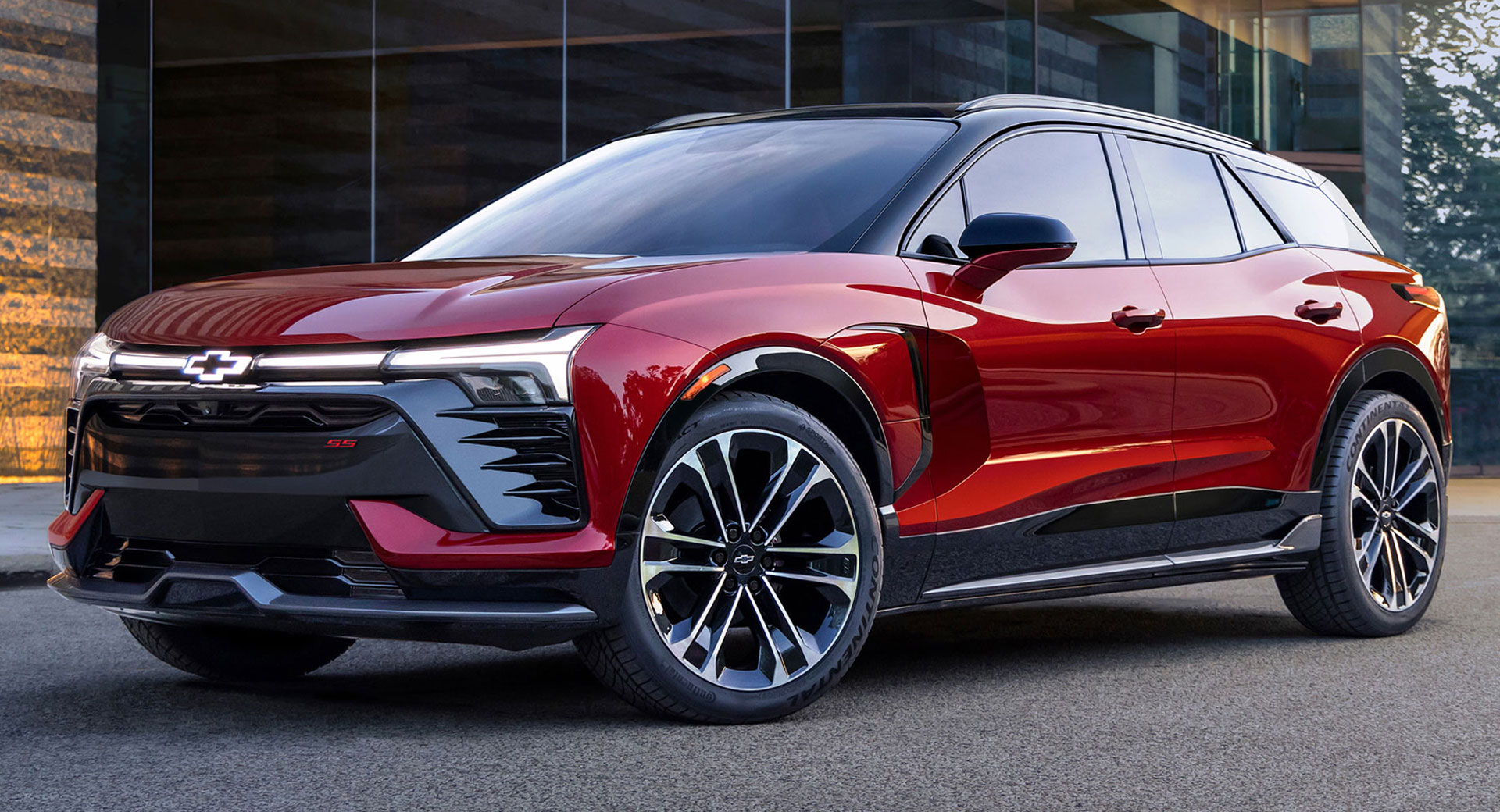 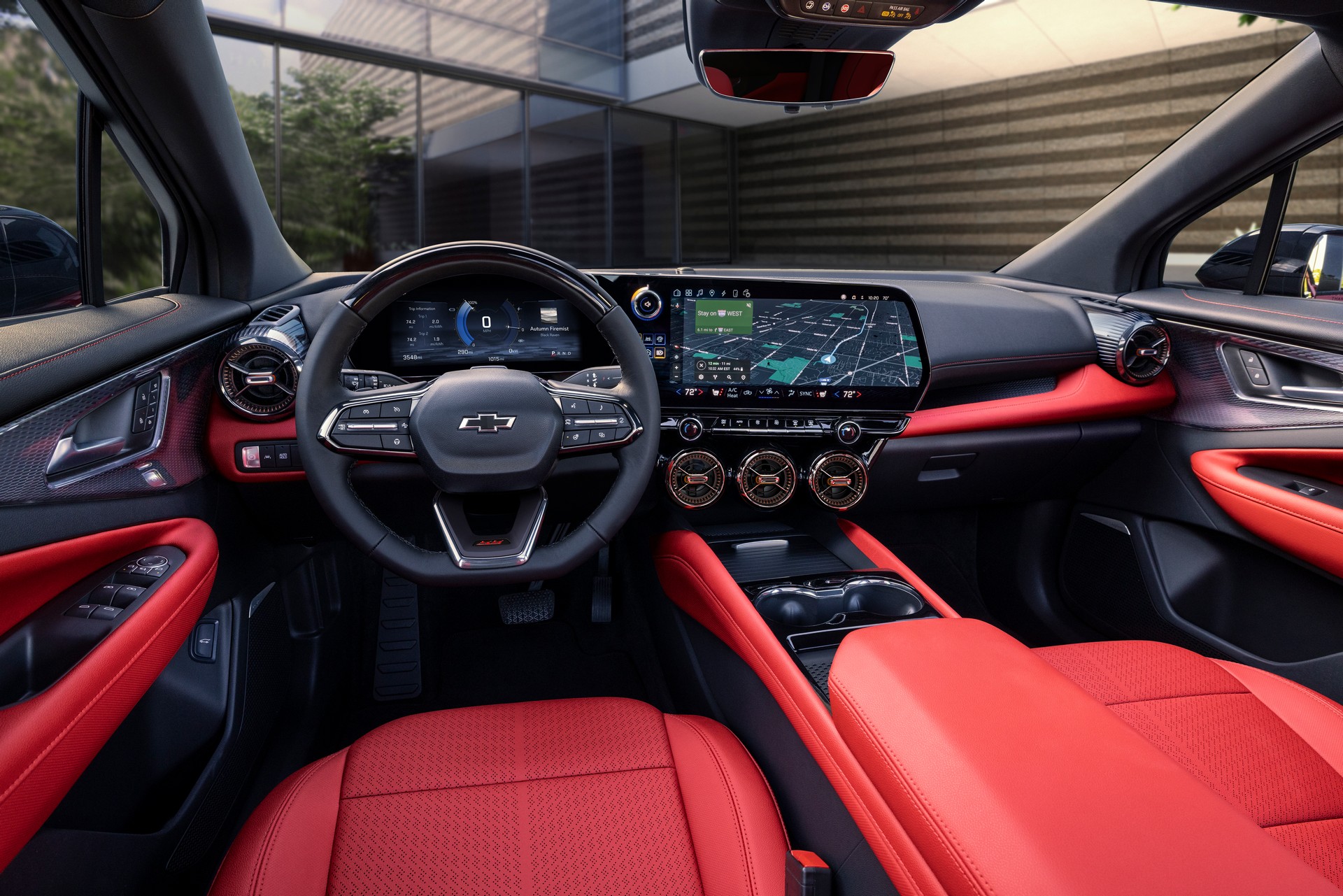 We’ve looked at the budget end of the Blazer range, but how do things look at the other end of the scale? The Blazer SS is the performance flagship of the range, Chevy’s first ever electric performance car, and will cost $65,995 when it lands in 2023.

That compares with $61,995 for the Ford Mustang Mach-E GT, while you’ll need to add a further $5k to get the GT Performance version. Volkswagen doesn’t have a go-faster flagship in its ID.4 range, but Tesla does. The Model Y Performance will set you back $69,990, which is only $4k more than the Model Y Long Range. 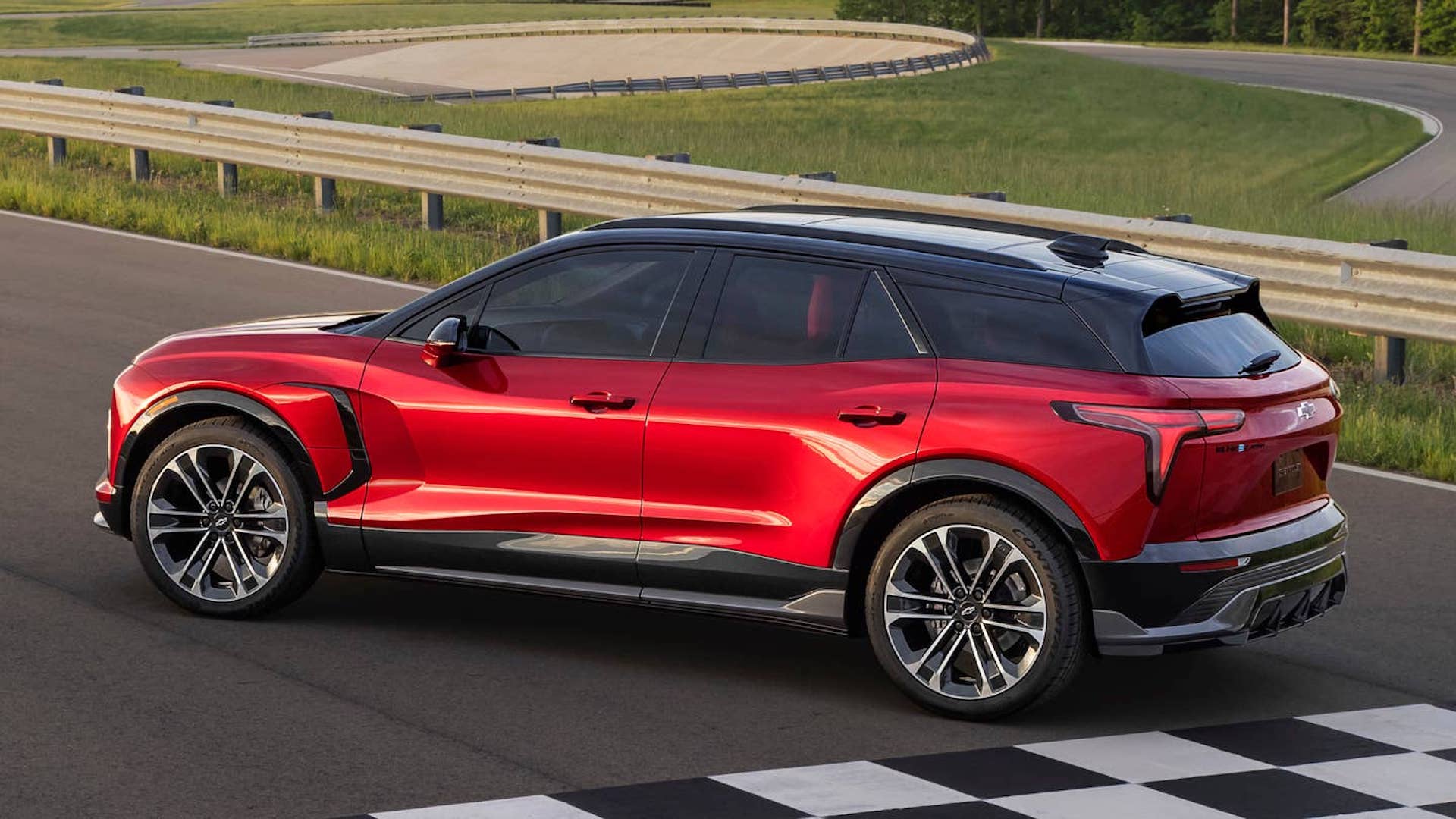 But both Mach-E GTs look pretty tame next to the Blazer SS. We don’t know exactly how fast it accelerates, GM only saying that it needs “less than” 4 seconds to 60 mph when the Wide Open Watts (WOW) mode is activated. But given that it pumps out 557 hp (565 PS) and 648 lb-ft (878 Nm) of torque, we suspect the final number might be closer to three than four. 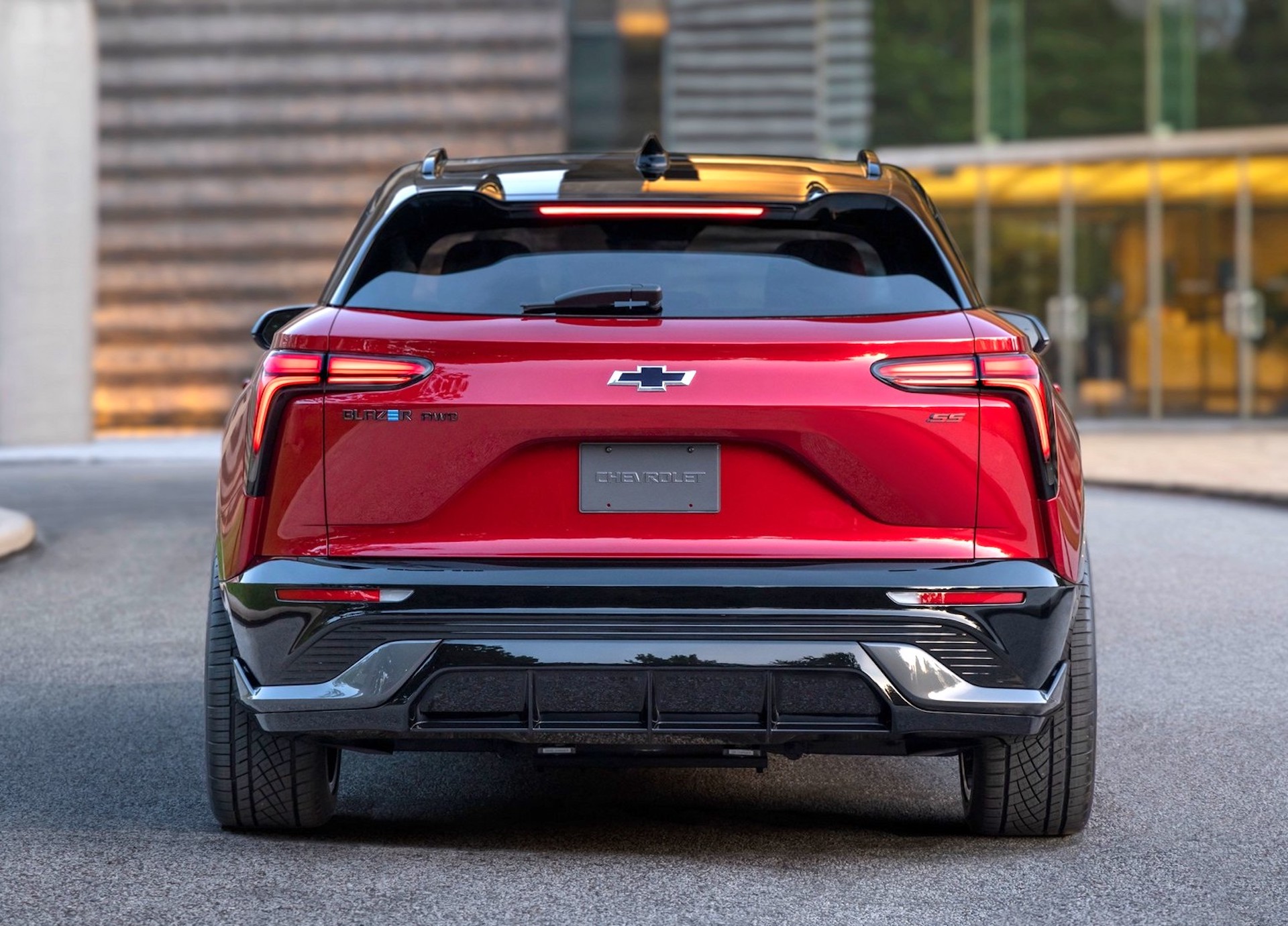 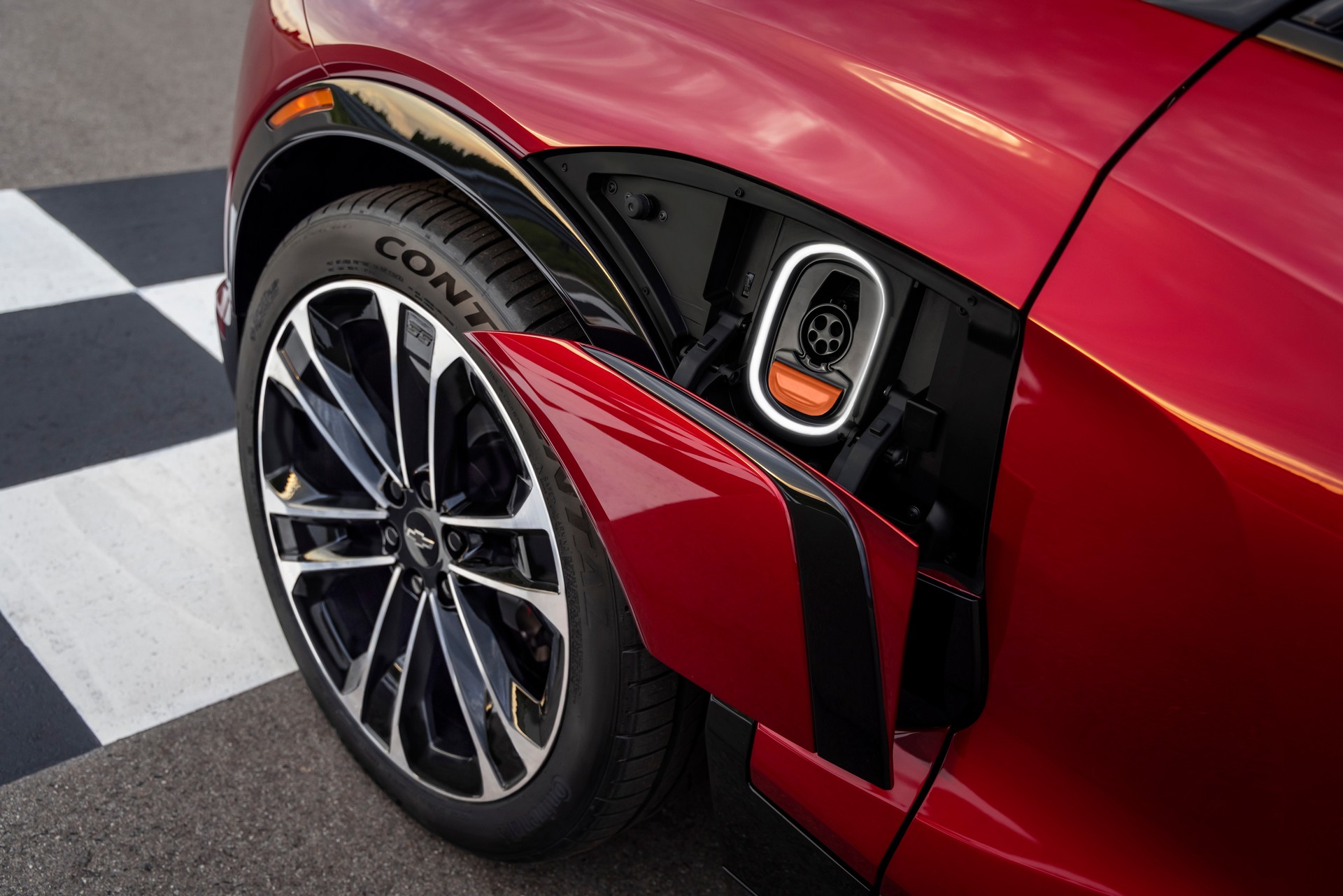 The Blazer SS is the most expensive, most powerful model in the lineup, but it isn’t the version with the longest electric driving range. That would be the two-wheel drive RS, which can travel 320 miles (515 km) on a charge, whereas the SS needs a top-up after 290 miles (467 km). That means Chevy’s electric muscle car plays second fiddle to the Tesla Model Y Performance (303 miles/488 km), but makes a better long distance companion than the Mach-E, which the EPA rates at 270 miles (435 km) in GT guise, and only 260 miles (418 km) when equipped with the GT Performance upgrade.

We’re looking forward to doing a more in-depth comparison when Chevy releases additional Blazer details closer to summer 2023, which is when the mid-range 2LT and RS models will arrive (the SS lands in late ’23, and the 1LT in spring ’24). But so far it’s shaping up to be a genuinely capable and desirable family EV. Would you take a Blazer over its rivals? Drop a comment below and tells us which would get your cash.

Note: We’ve tried to use pictures relating to the exact models we’re talking about where possible, but in some cases we’ve had to post images of the closest trim grade available.