The Land Rover Defender might have gotten an all-new generation in 2019, but the Classic department of the British automaker has just unveiled another re-engineered expedition-inspired version of the original for 2022. The Land Rover Classic Defender Works V8 Trophy II is a follow-up to last year’s Works V8 Trophy and will be produced in a limited number of 25 units, with the owners getting a chance to participate in a new installment of the Land Rover Trophy competition.

The special Defenders will be based on vehicles made between 2012 and 2016. Each one will be stripped and rebuilt by hand, bringing several improvements. The Works V8 Trophy II will be available in three different bodystyles. More specifically, Land Rover Classic will build 10 units of the 90, 10 units of the 110 Station Wagon, and five units of the 110 Double Cab Pick-Up. 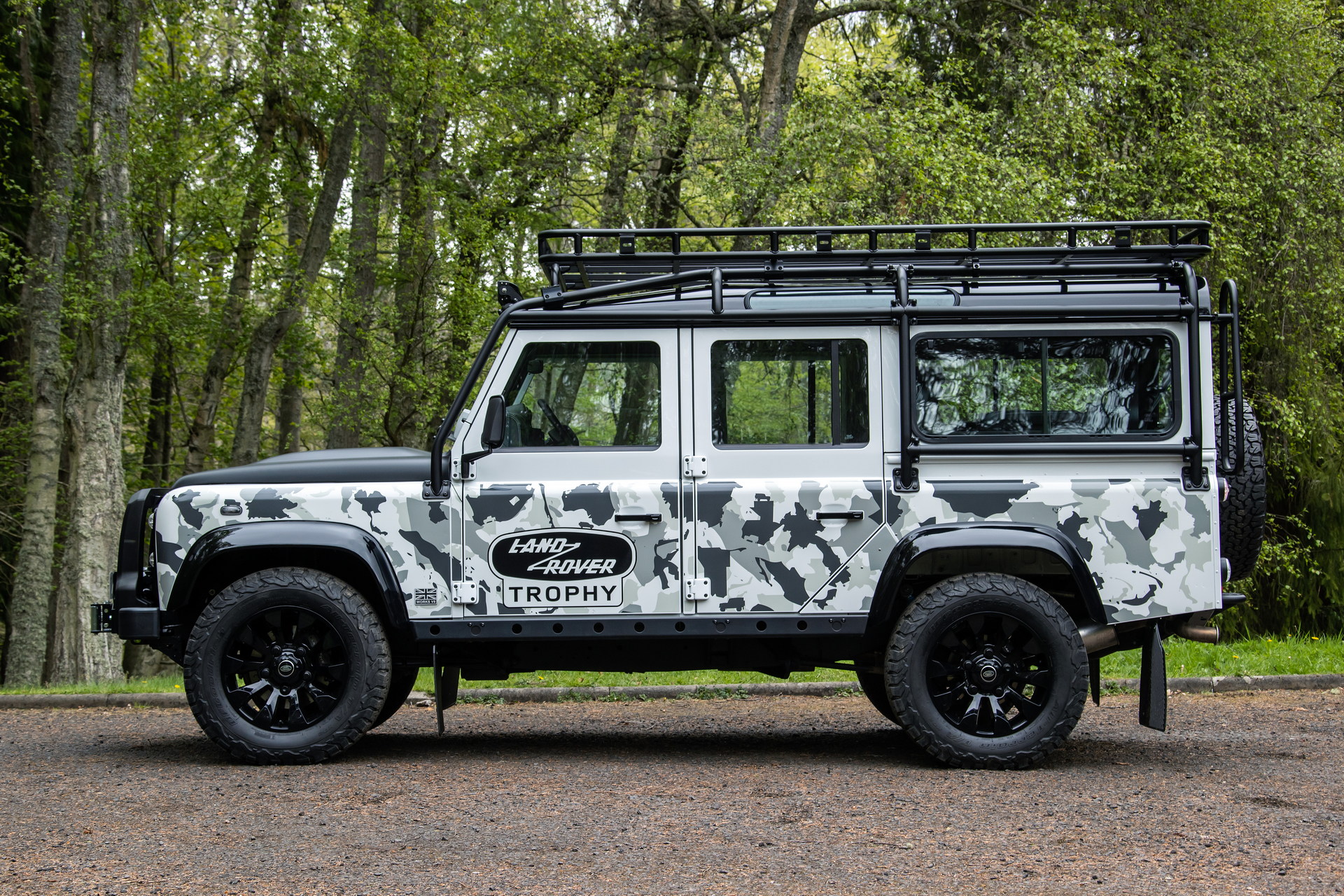 Visually, the Trophy II is distinguished by the camouflage wrap which integrates 23 locations from Land Rover’s past off-roading adventures and features the silhouette of the classic Defender. All 25 units will be painted in Fuji White, combined with a Narvik Black roof, black accents, a satin black bonnet and a set of gloss-black 18-inch Sawtooth alloy wheels. The model also gets heritage badging and a bunch of off-road-focused components.

Extra kit includes a bullbar with a winch in front of the bespoke grille, a full-width LED light bar, a roof rack connected to the exterior roll-cage and the rear-mounted ladder, rock sliders, mud flaps, and a rear recovery point. Inside the cabin, we find two-tone Recaro sports seats, Windsor leather upholstery with white stitching, a pistol shifter for the automatic gearbox, a new infotainment system by Land Rover Classic, and an Elliot Brown clock in matching camouflaged flavor.

See Also: One Of 10 “Spectre” Defenders Built For The 007 Movie Is Up For Sale 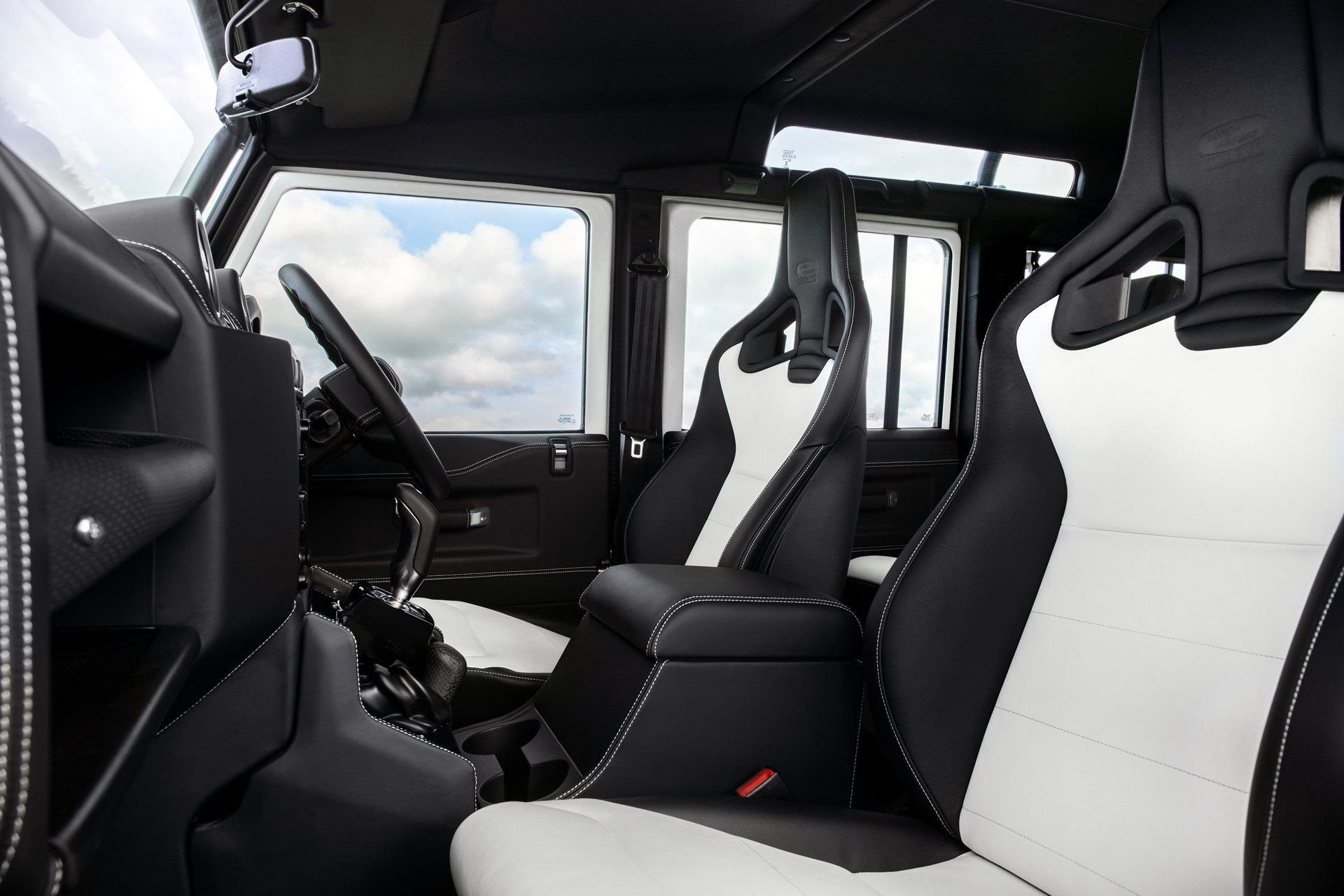 Under the bonnet, the good-old naturally aspirated 5.0-liter V8 engine might not be as powerful as the one in the new Defender V8, but it still produces 400 hp (298 kW / 405 PS) and 515 Nm (380 lb-ft) of torque. Power is transmitted to all four wheels through an eight-speed ZF automatic gearbox. Land Rover Classic has also upgraded the suspension, brakes, and steering, improving the handling and the driving dynamics of the original.

The Land Rover Classic Defender Works V8 Trophy II is priced from £225,000 ($273,593) for the 90 bodystyle in the UK, which makes it more expensive than its predecessor. Still, we are sure that all 25 units will be sold at no time, since there are many Land Rover enthusiasts craving rare OEM-built versions of the classic Defender. Owners of the special edition will be invited to take part in a three-day Land Rover Trophy competition. There, they will be able to compete in a series of off-road challenges, with a grand prize for the winning team.