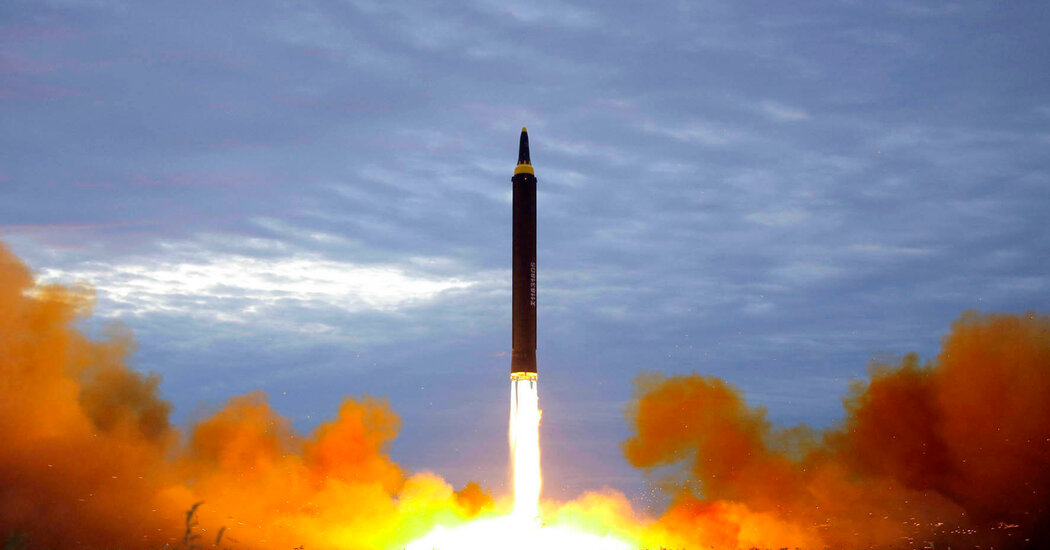 The launches mark the 24th time this year that North Korea has conducted missile tests. The missile fired on Tuesday was the first from North Korea to fly over Japan in five years, triggering alarms across Japan’s northern regions.

North Korea launched two short-range ballistic missiles that landed on Thursday outside Japan’s economic exclusion zone, according to Japan’s Defense Ministry. They were launched from near Pyongyang, the North Korean capital, toward the waters off the east coast, according to the South Korean military.

In a news briefing, Yasukazu Hamada, Japan’s defense minister, said the first missile was launched at 6 a.m. and traveled about 217 miles and reached a maximum altitude of about 62 miles. The second missile, launched at 6:15 a.m., flew close to 500 miles and as high as 31 miles.

Mr. Hamada said the second missile followed what appeared to be an “irregular trajectory.”Some of the short-range ballistic missiles that North Korea has tested in recent years were able to change course during flight, making them more difficult to intercept. In brief remarks to reporters, Prime Minister Fumio Kishida of Japan said the launches were “absolutely unacceptable.”

The launches came a day after the United States and South Korean militaries fired four surface-to-surface missiles off the east coast of South Korea in a combined drill. Another South Korean ballistic missile fell immediately after takeoff during the exercise, but caused no casualties, South Korean defense officials said.

Analysts have said that North Korea appears to be intensifying its missile-testing program in advance of midterm elections in the United States, and in response to an American aircraft carrier, the U.S.S. Ronald Reagan, sailing in the waters between Japan and the Korean Peninsula for the first time in five years for joint military exercises last month.

After North Korea’s missile tests on Tuesday, the nuclear-powered aircraft carrier was ordered to sail back to the waters off the east coast of the Korean Peninsula, according to the South Korean military.

Earlier on Thursday, North Korea’s Foreign Ministry issued a statement condemning the United States for redeploying its aircraft carrier group back to the waters off the peninsula. It criticized a United Nations Security Council meeting on Wednesday that discussed its recent missile provocations and additional sanctions against the country. The ministry said the tests were “just counteraction measures” against the joint military drills the United States conducted with its allies last month, and accused its enemies of “unwarrantedly” referring it to the Security Council.

North Korea “is watching the U.S. posing a serious threat to the stability of the situation on the Korean Peninsula and in its vicinity,” the statement said.

In recent months, North Korea has conducted a flurry of ballistic missiles tests in violation of Security Council resolutions. Washington has tried to persuade the Council to impose additional sanctions against Pyongyang. China and Russia, both veto-wielding powers, have rejected those moves, insisting that the United States restart dialogue with Pyongyang and consider easing sanctions.

North Korea has traditionally conducted its own military drills, including weapons tests, when the United States and its allies carry out joint military exercises in the region. The North calls those exercises rehearsals for invasion, while Washington, Seoul and Tokyo have said the drills help safeguard against the North’s growing nuclear threat.

With the barrage of missile tests recently, analysts and government officials in Tokyo, Seoul and Washington are bracing for North Korea to conduct a nuclear test.

After the test on Tuesday, Secretary of State Antony J. Blinken, traveling in Santiago, Chile, said: “We believe that North Korea would be much better served by not only refraining from these actions, but actually engaging in dialogue. I think what we’re seeing is that if we continue down this road, it will only increase the condemnation, increase the isolation, increase the steps that are taken in response to their actions.”