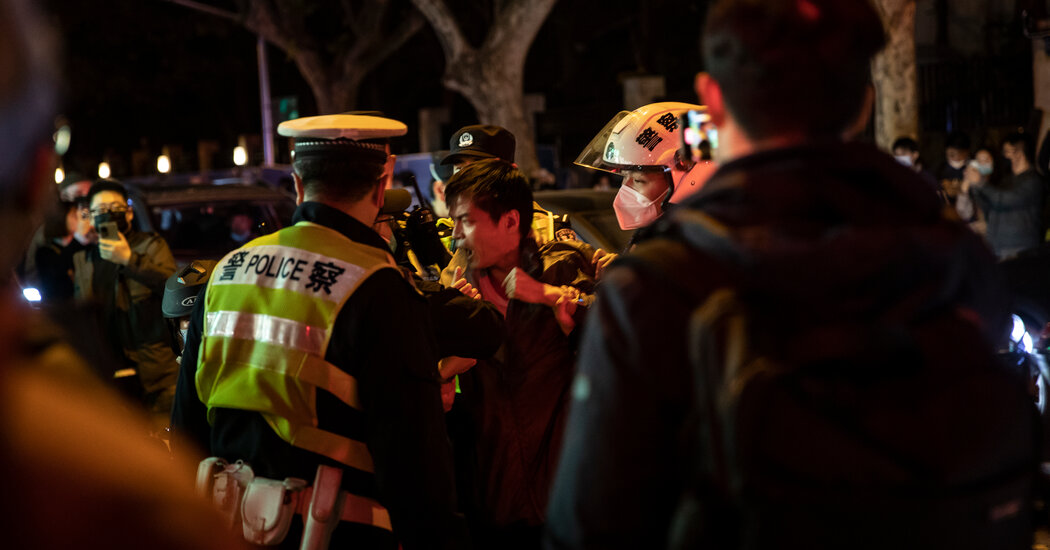 The toll of China’s unwavering approach to fighting Covid has rippled through the world’s second-largest economy for months: Youth unemployment reached a record 20 percent, corporate profits sagged, and economic growth fell well below Beijing’s own projections.

The economic pain has intensified the pressure to ease pandemic restrictions to salvage the flagging economy and restore some semblance of normal life. Frustration with the government’s zero-tolerance Covid strategy, which has failed to prevent a big jump in cases, escalated over the weekend as a population tired of unpredictable lockdowns, extended quarantines and mass testing erupted into protests. Smaller, scattered demonstrations continued on Monday.

The current Covid outbreak, the most widespread since the start of the pandemic in 2020, has painted Xi Jinping, China’s president, into a corner. He has refused to budge on the government’s strict Covid approach. If he loosens restrictions and infections skyrocket, there is the risk of mass casualties and an overwhelmed health care system. But keeping the current policies in place and limiting infections with widespread lockdowns would inflict further damage to an already slowing economy.

“The government has no good options at this point,” said Mark Williams, chief Asia economist for Capital Economics, a research firm. “Whatever they do, it’s hard to see how there won’t be significant restrictions imposed across large parts of the country, which is going to have a huge impact on weakening the economy.”

More than 80 cities in China are now battling infections compared with 50 cities in the spring, when a smaller surge of infections prompted an eight-week lockdown in Shanghai and set the economy on its slowest pace of annual growth in decades. These cities account for half of China’s economic activity and ship 90 percent of its exports, according to Capital Economics.

Earlier this month, China announced plans to ease some pandemic policies, fueling speculation that it was the beginning of a transition to phase out its “zero-Covid” policy, much to the delight of investors who sent shares of Chinese companies soaring. But as the number of infections rose, the government reverted to a familiar playbook and held firm to what it has said all along: China is trying to eradicate Covid, not learning to live with it.

In a series of editorials in state media starting on Sunday, Beijing said that China still needed to “maintain strategic focus” in combating Covid, but it urged officials around the country to avoid extreme measures such as blocking fire exits or barricading communal doors during quarantine. It stressed the need for local officials to adhere to policy tweaks meant to “optimize” existing Covid policies and limit disruptions to people and businesses.

Even so, the authorities on Monday night deployed additional security to discourage another night of protests.

The growing unrest has threatened to jeopardize China’s hard-earned reputation as the world’s factory floor. Last week, workers upset about unpaid Covid bonuses and poor quarantine protocols rioted and clashed with police at a Chinese factory where Taiwanese contract manufacturer Foxconn produces more than half of the world’s iPhones.

Andrew Fennell, an analyst who oversees China’s government credit ratings for Fitch, said the country’s uncompromising approach has “weighed heavily on the economy and elevated social tensions.” He said that he expects Beijing to relax the most restrictive measures under its zero-tolerance approach, such as citywide lockdowns, in 2023, but that many restrictions will remain in place because of relatively low vaccination rates among the elderly in China.

In a reflection of those low rates, China said on Tuesday that it would increase efforts to vaccinate its oldest citizens, a move experts see as a crucial precursor to reopening the economy.

Goldman Sachs estimated in a note on Monday that there was a 30 percent chance that China would abandon “zero Covid” before April as the central government is forced to “choose between more lockdowns and more Covid outbreaks.”

After the initial outbreak of Covid in 2020, China’s economy bounced back quickly. While the rest of the world remained in lockdown, China’s hard-line approach to keeping the coronavirus in check worked well and its economy roared to life. In particular, exports were a bright spot as Chinese factories manufactured many of the products that the rest of the world bought online during isolation. Last year, China’s economy grew by an impressive 8 percent.

Currently, many of China’s biggest trading partners are staring at a possible recession from runaway inflation, rising interest rates, and the war in Ukraine. Domestically, the usually reliable pillars of real estate and high technology have fallen on hard times, and making more credit available to businesses has not jumpstarted the economy.

For small businesses, the recent outbreak is already sapping demand.

Cai Zhikang, a cake shop owner in Shenzhen, said corporate customers, the main source of his business, are starting to cancel orders more frequently. He said that a customer had scrapped a large corporate catering order exceeding $500 on Monday, a day after residents in the city in southeastern China staged a protest there over some of the latest restrictions.

Mr. Cai, 28, said that each wave of infections had brought more austerity from corporate customers who cut back on spending for employee treats to preserve their budgets. He said that he was also forced to close his shop for a month when Shenzhen imposed restrictions on the park where he operates his store. There is no point, he added, in planning ahead anymore because everything is dependent on whether Covid is spreading or not.

The impact has also spread to larger companies. A decline in overall profits at China’s industrial firms accelerated in October, according to the National Bureau of Statistics. Profit in China’s 41 industrial sectors fell by 3 percent in the January to October period, a steeper decline compared with a 2.3 percent slide in January to September, numbers released on Sunday indicate.

China’s initial success in containing Covid started to crumble this year with the spread of the more infectious Omicron variant. The government projected a modest 5.5 percent growth for 2022 in March, several weeks before a sharp rise in infections pushed Shanghai into lockdown and brought the economy to a grinding halt. A series of smaller subsequent outbreaks has continued to test the limits of China’s zero-tolerance strategy, putting the government’s economic growth target out of reach.

On Monday, Nomura, a Japanese brokerage, cut its forecast for fourth-quarter economic growth to 2.4 percent from an earlier estimate of 2.8 percent, citing “a slow, painful and bumpy road to reopening.” It also lowered its gross domestic product prediction for 2023 to a 4 percent increase from a previous estimate of 4.3 percent.

A slowdown in the economy is already apparent to Emma Wang, 39, who owns a store selling handbags and suitcases in a shopping mall in Langzhong, a city in Sichuan Province where there are a handful of infections.

When she opened her store two years ago, business was steady and profitable. But more recently, people have started avoiding malls even though the city is not under lockdown. She is considering moving her business online to sell off her inventory.

“In the pandemic, there are no customers,” said Ms. Wang. “It’s difficult to sell even one bag.”

Compounding the problems for the mother of two is that her husband, who works for a food manufacturer whose business also has been disrupted, has not been paid by his employer for a few months.

“We have a mortgage and credit card loans,” she said. “The situation is not improving and it really upsets me.”