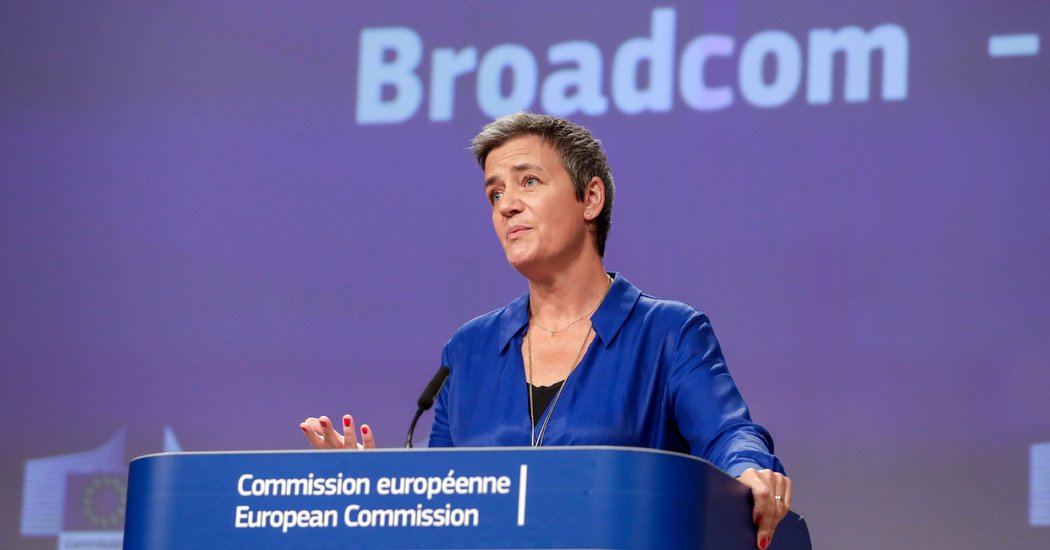 Already considered the world’s most assertive regulator of the technology industry, the European authorities on Wednesday signaled an even more aggressive approach by applying a rarely used rule to order a company to halt a potentially anticompetitive practice as investigators explore the case.

The European Commission’s antitrust enforcer, Margrethe Vestager, said “interim measures” were being taken against the chip-maker Broadcom to ensure that its competitors were not marginalized amid an inquiry. It is the first time the regulator has used the rule in nearly two decades, signaling urgency within Europe to keep the technology market competitive.

Broadcom, the leading maker of chips used in television set-top boxes and modems, has been accused of using exclusivity agreements to block customers from using products made by rivals. A formal inquiry of Broadcom was opened in June, and the European Commission is now ordering the company to stop enforcing the exclusionary terms with six manufacturers who make television set-top boxes and modems.

Ms. Vestager said Broadcom’s competitors would suffer falling revenue and faltering viability if the company’s actions were not halted, and that spurred her decision. “They will progressively be marginalized and may ultimately be forced to leave the market,” she said.

Broadcom said it would appeal the decision.

The Commission’s use of interim measures in the case has significant ramifications for companies like Amazon, Apple, Facebook and Google, which Europe has targeted over anticompetitive practices.

The European authorities have handed out billions of dollars in antitrust penalties against technology giants but have been criticized for not acting quickly enough to match the plans of the fast-paced technology industry. By the time regulators have ordered the companies to change their business practices, the companies have cemented a dominant market position, or the technology itself has adjusted or advanced.

Wednesday’s announcement highlights the power of Ms. Vestager, a longtime foe of the tech industry who in December will begin a second five-year term as the European Union’s top antitrust regulator. In a confirmation hearing last week, she signaled that tougher and broader oversight would follow.

“Interim measures aim at preventing irreversible harm to competition,” Ms. Vestager said at a news conference in Brussels, adding that they “allow the Commission to order a company to stop conduct that we consider at first sight to be illegal.”

Ms. Vestager said her office had weighed the company’s right to defend itself versus a need for “speed and effectiveness in antitrust enforcement.”

Companies have resisted the use of interim measures, arguing that the move amounts to reaching a verdict in a trial that is still underway.

Broadcom said its practices and provisions were not harming competition. “We do not believe that these provisions have a meaningful effect on whether the customers choose to purchase Broadcom products,” the company said in a statement.

The commission is also exploring an investigation of Facebook, a person familiar with the inquiry has said. Apple has been accused by rivals of imposing unfair terms on companies that sell services through the App Store.