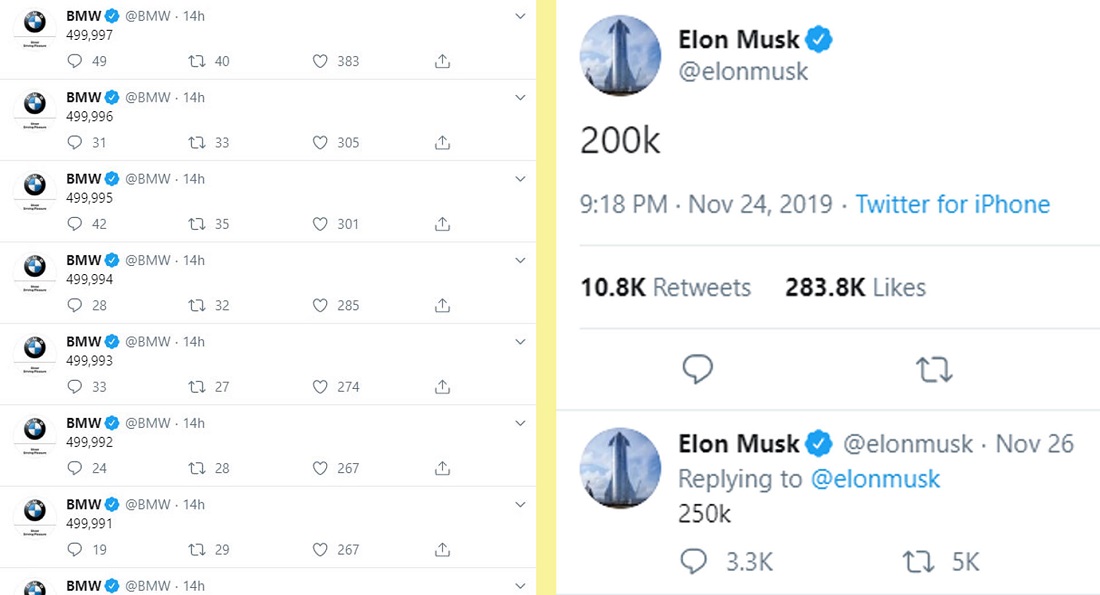 Following the unveiling of the Cybertruck, Tesla CEO Elon Musk tweeted out “200k” and then “250k” in an apparent reference to the number of pre-orders the company had received for the controversially styled pickup.

The count finally stopped earlier today when the company reached 500,000. At the time, the BMW Group confirmed they sold their 500,000th electrified vehicle and said that’s one every four minutes.

500,000
…electrified BMW Group vehicles have been sold. Statistically, one every four minutes. And counting.#NextGenJoy pic.twitter.com/FVEIf5O8yx

The 500,000th model was a BMW 330e which was delivered to its owner at the BMW Welt Museum in Munich, Germany. Since the company considered this an “electromobility milestone,” the keys to the car were personally handed over by BMW’s Sebastian Mackensen.

While 500,000 vehicles is a notable achievement, BMW Chairman Oliver Zipse said “We are stepping up the pace significantly: We aim to have one million electrified vehicles on the roads within two years.”

In order to hit that target, BMW will launch the iX3 next year. It will be followed by the iNEXT and i4 in 2021.

Of course, the BMW’s electric revolution started with the i3 and the company says it’s now an icon. That’s debatable, but the automaker confirmed plans to further develop the vehicle and extend production until 2024.

The BMW Group currently offers 12 electrified models and more are coming in the future. Unsurprisingly, the company expects them to become increasingly popular as a quarter of BMW Group vehicles sold in Europe are slated to be electrified by 2021. That number is slated to increase to a third by 2025 and half by 2030.