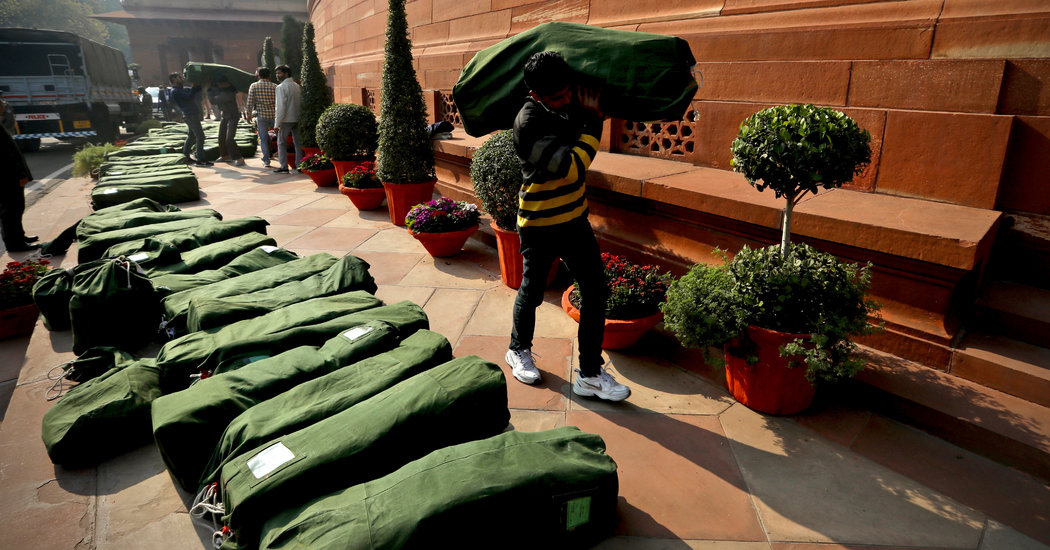 NEW DELHI — India is stuck in its biggest economic slump in more than a decade, but Prime Minister Narendra Modi’s budget for the new year, unveiled on Saturday, offers only small steps to try to create a turnaround.

The government’s $428 billion budget for 2020-21 laid out a series of modest initiatives, including planned investments in new roads and airports and personal income tax cuts, along with an increase in bank deposit insurance to reassure customers rattled by high-profile bank failures.

But it offered no large stimulus program to provide more jobs or money in the pockets of India’s 1.3 billion residents, most of whom barely get by through farming or work in the informal economy. Nor did the budget propose any additional support for the country’s weakened financial institutions.

“Our government shall work towards taking the country forward so that we can leapfrog to the next level of health, prosperity and well-being,” said Mr. Modi’s finance minister, Nirmala Sitharaman, while announcing the budget.

But Jayati Ghosh, an economist and professor at the Jawaharlal Nehru University in Delhi, had a different view of the government’s proposals. “It’s all smoke and mirrors,” she said.

Ms. Ghosh said the signs of economic distress were everywhere. “People have gone back to two meals in a day,” she said. “Children are going without milk.”

India’s economy grew about 4.8 percent in 2019, a sharp drop from 6.8 percent in 2018, according to the International Monetary Fund. Last year, inflation rose and business investment ground to a halt; from underwear to automobiles, sales of consumer products slowed.

Unemployment rose to 7.5 percent in the last three months of 2019, with city dwellers and young people hit particularly hard, according to the Center for Monitoring Indian Economy.

Demand for new housing has been weak for four years, according to Knight Frank, an international real estate consultancy.

On Friday, the Modi government projected that economic growth would rebound to as much as 6.5 percent for the fiscal year that begins on April 1.

International organizations like the International Monetary Fund predict a more modest turnaround. But forecasting is especially tricky at present, with the global economy facing risks from the deadly coronavirus outbreak in China, from Britain’s exit from the European Union and from an unresolved trade war between the United States and China.

Mr. Modi’s government is facing its biggest challenge in years, as Indians from all walks of life have taken to the streets to protest against the government.

The protests began in December over a divisive citizenship law that makes it easier for immigrants — except those who are Muslim — to become Indian citizens. With the government planning a national exercise to make all Indians prove their citizenship, the demonstrators say they are defending India’s secular roots.

Concerns about the weak economy are also seeping into some of the protests. Thousands of employees of government-owned banks, which have done poorly, according to the country’s annual economic survey, were on strike on Friday and Saturday.

Budgets in India have always been aspirational documents packed with goodies to appeal to different sections of voters in the country. For example, Ms. Sitharaman announced funding for programs aimed at lower-caste Indians and members of tribes, who are among the country’s poorest people.

Investors hoping for a capital gains tax cut were disappointed and sent shares lower in India’s stock market, which was ordered to open on Saturday specifically so that people could react to the budget.

Economists are worried that the current problems could deepen in the next few months unless the government takes more aggressive action.

“The kind of crisis the economy is currently facing and also the scale of it — what is still missing is how you restore the consumption demand which has collapsed,” said Sunil Kumar Sinha, principal economist at India Ratings and Research, a credit-rating agency.

International trade is also a concern. India and the United States have been locked in an escalating trade fight for more than a year. Officials in India are working hard to prepare for a state visit by President Trump in late February, when the countries hope to sign a much-awaited trade deal.

But a trade deal will not solve India’s larger problems.

“Everyone is saying you need to inject more fiscal stimulus,” said Ms. Ghosh, the economist at Jawaharlal Nehru University. “Employment is down, every sector is affected. Right now, you need to make the patient survive. And then you can think about making him walk.”