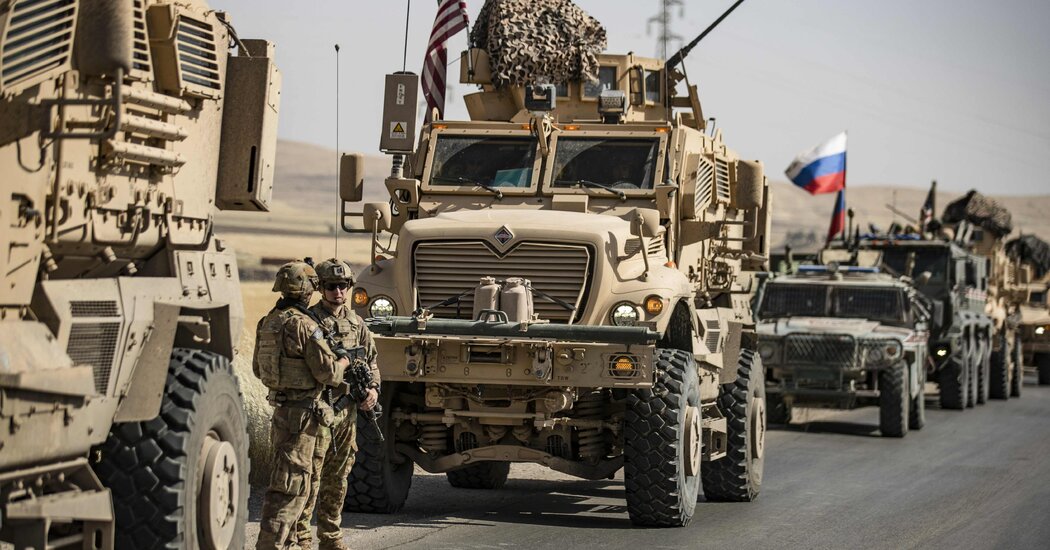 WASHINGTON — A small number of U.S. troops were injured this week during a skirmish with Russian forces in northeastern Syria, American officials said on Wednesday, underscoring the risk of simmering tensions between the two rival powers in a hotly contested part of the country.

Two U.S. officials, speaking on the condition of anonymity to discuss operational details, said the injuries were a result of a collision between Russian and American vehicles, and not any exchange of fire. The officials said four troops were showing mild concussion-like symptoms and were receiving medical attention at their base in Syria.

Videos of the encounter that emerged on Twitter on Wednesday appeared to show Russian and Americans vehicles speeding in an open field, with a Russian vehicle ramming an American vehicle, and a Russian helicopter flying low over U.S. forces.

The altercation, believed to have happened on Monday or Tuesday, is the latest clash between Russian and American ground patrols in northeastern Syria after the United States withdrew from much of that area before a Turkish cross-border offensive last fall.

Russian military personnel have increasingly had run-ins with U.S. troops on highways in the region, breaking agreements between the two countries to steer clear of each other, American officials say.

Spokesmen for the Pentagon declined to comment on the incident, which was first reported by Politico, referring all questions to the White House in a sign that the Defense Department did not want to focus attention on tensions with Moscow during the Republican convention, and possibly draw President Trump’s ire.

“To de-escalate the situation, the coalition patrol departed the area,” Mr. Ullyot said. “Unsafe and unprofessional actions like this represent a breach of de-confliction protocols, committed to by the United States and Russia in December 2019.”

But critics of the administration said the White House’s response fell woefully short.

“As #RNC2020 speakers claim we’re so respected under Trump’s leadership: Russian military forces are ramming and injuring US troops in Syria,” Brett H. McGurk, Mr. Trump’s former top special envoy for the coalition to defeat the Islamic State, said in a message on Twitter on Wednesday.

“No competent C-in-C would leave our troops in this position,” Mr. McGurk said, referring to commander in chief. “These incidents have been ongoing for months. Trump has apparently never raised the issue in multiple calls with Putin. He leaves our troops to fend for themselves.”

A spokeswoman for Gen. Mark A. Milley, the chairman of the Joint Chiefs of Staff, said he spoke to Gen. Valery V. Gerasimov, the chief of the Russian general staff, by phone on Wednesday, but she did not disclose any details about the call.

Alexander Bick, who was director for Syria in President Barack Obama’s National Security Council, said that Russia may have political reasons to pick a fight now.

“For the Russians, there may even be a U.S. election calculation here: to provoke an incident while Trump, whose position on this is clear, is still in office — rather than to deal with a Biden administration that’s likely to be far more friendly with the Kurds and more adversarial towards Russia,” Mr. Bick said.

The clash with the Russians comes just a week after a U.S.-led convoy returned fire after it came under attack near a checkpoint manned by forces loyal to President Bashar al-Assad of Syria, who are backed by Russia.

A day later, on Aug. 18, three small Katyusha rockets landed near the American military’s Conoco base in northeastern Syria. The rockets, which American officials said were fired from areas controlled by the Syrian government, did not cause any casualties or damage.

American officials say these actions by Russian personnel and their Syrian allies are devised to present a constant set of challenges, probes and encroachments, and apparently designed to slowly create new facts on the ground and make the U.S. military presence there more tenuous.

Last October, Mr. Trump abruptly ordered a complete withdrawal of the 1,000 American troops helping Syrian Kurdish forces combat pockets of Islamic State fighters, opening the way to a bloody Turkish cross-border offensive. Mr. Trump, just as abruptly, reversed himself and allowed about 500 troops to remain in a much smaller operating zone with a mission to protect oil fields and help fight remnants of the Islamic State.

Ever since then, American military officials say, Russia and its Syrian allies have been pushing the boundaries of agreements that Russia and the United States reached on whose armies would patrol which territory. The two sides established special communications channels to avoid clashing with each other on the ground, a process the Pentagon calls deconfliction.

But American officials say the Russians repeatedly flout these rules — sometimes flooding the deconfliction channel with requests they do not follow up on and at other times ignoring the denied permissions to move in certain areas altogether.

In his taped remarks from Jerusalem on Tuesday for the Republican National Convention, Secretary of State Mike Pompeo cited the defeat of the Islamic State in Iraq and Syria as one of Mr. Trump’s crowning achievements.

“Because of the president’s determination and leadership, the ISIS caliphate is wiped out. It’s gone,” Mr. Pompeo said.

But a United Nations report issued this month said thousands of Islamic State fighters remain active in Syria and neighboring Iraq, with increasing insurgent activity, especially in the early part of 2020, as well as growing number sleeper cells in Homs, Deir al-Zour and Hasakah, Syria.

“More than 10,000 ISIL fighters are estimated to remain active in Iraq and the Syrian Arab Republic,” said the report, using an alternate name for ISIS. “These fighters, organized in small cells, are freely moving across the border between the two countries.”

The United States is looking into an explosion at a major gas pipeline in Syria this week, but the episode bears the hallmarks of the Islamic State, James Jeffrey, the U.S. envoy for Syria, said Monday. “It was almost certainly a strike by ISIS,” Mr. Jeffrey told reporters in Geneva at the start of United Nations-sponsored talks of the Syrian Constitutional Committee.

American officials have sought to play down the ISIS threat in northeastern Syria, arguing that the insurgents no longer hold any territory and, at best, can only menace local tribal leaders and others who cooperate with the U.S.-backed Syrian Democratic Forces, a Syrian Kurdish militia.

“Our assessment is that it is a threat but it isn’t an increasing threat,” William V. Roebuck, a career Foreign Service officer who is the Trump administration’s deputy special envoy to the Global Coalition to Defeat ISIS, told a virtual security conference this month organized by the United States Institute of Peace. “They’re not able to mount sophisticated attacks or operations.”

Speaking at the same conference, Gen. Kenneth F. McKenzie, commander of the Central Command, said the United States would eventually draw down its troops in Syria, but offered no timetables.

“I don’t think we’re going to be in Syria forever,” General McKenzie said. “At some point, we do want to get smaller there. I just don’t know when that’s going to be. As long as we remain, we’re going to work very hard to finish off ISIS.”