With cuts to vehicle development due to Coronavirus, its reassuring to hear that some of the more unlikely nameplates to survive are getting another chance. One of these is the slow-selling Mercedes SL Roadster, which now joins the Mercedes-AMG performance stable.

Recent spy photography indicates its replacement is well into the pre-production testing phase, and the German luxury powerhouse has hidden the design rather well. Nevertheless, we’ve managed to strip back the camouflage to reveal what’s in store for 2022; so lets illustratively delve further.

Inspired by its beautiful 300 SL forbearer, this thing is all about exquisite proportions. The long hood, elongated axle-to-dash ratio and short rear deck are all there to exude a dynamic, yet elegant appearance. Frontal styling is lean and aggressive, but not to the point where it’ll visually overpower its Mercedes-AMG GT stablemate.

Also See: Everything We Know About The Next-Gen 2022 Mercedes-Benz C-Class

According to most sources and even though it’s not clearly evident in the spy shots due to the heavy camouflage covering the top, the SL will return to a canvas roof convertible instead of a folding hardtop present in the last two iterations. This solution will not only save space, but significantly weight as well over a metal roof.

Side fender vents have also made it to the new generation car, along with some seriously scalloped lower door-sills. Arguably the most significant changes take place around the back; here a high deck-lid encompasses horizontal wedge-shaped taillights and a scalloped lower bumper sporting some very AMG-specific quad exhausts. 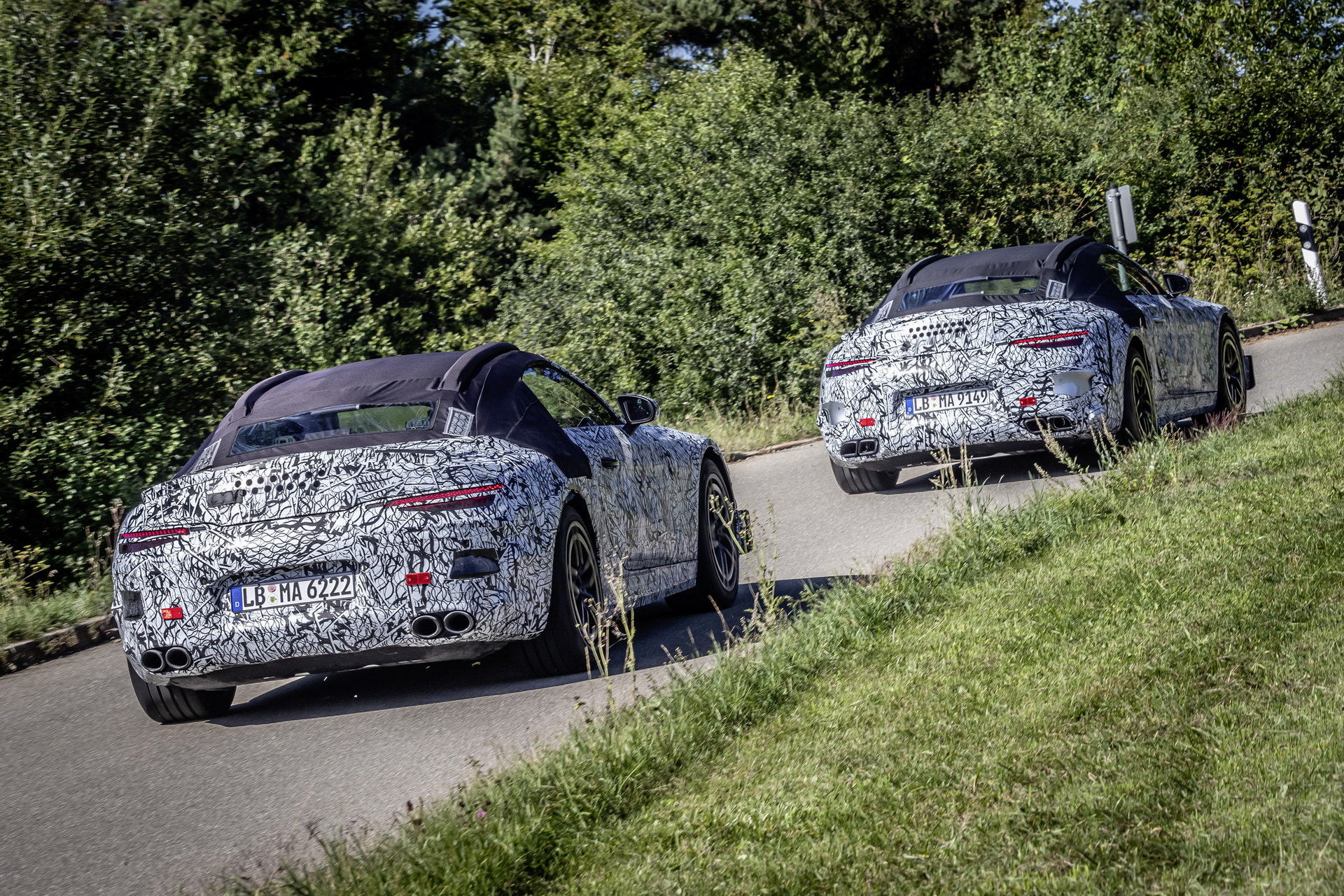 Since the S-Class coupe and convertible won’t see another generation, the Mercedes-AMG SL will by default, take over the mantle of being the most luxurious open-air Mercedes experience. Fortunately, much of the new W223 S-Class DNA will be evident in the SL through a vast suite of technological assists and a thoroughly modern cabin – whether it’ll be a two-seater with some storage space behind or a 2+2 seater as some German media is reporting, is yet to be confirmed.

See Also: This Is What The New 2022 Subaru BRZ Coupe Will Look Like 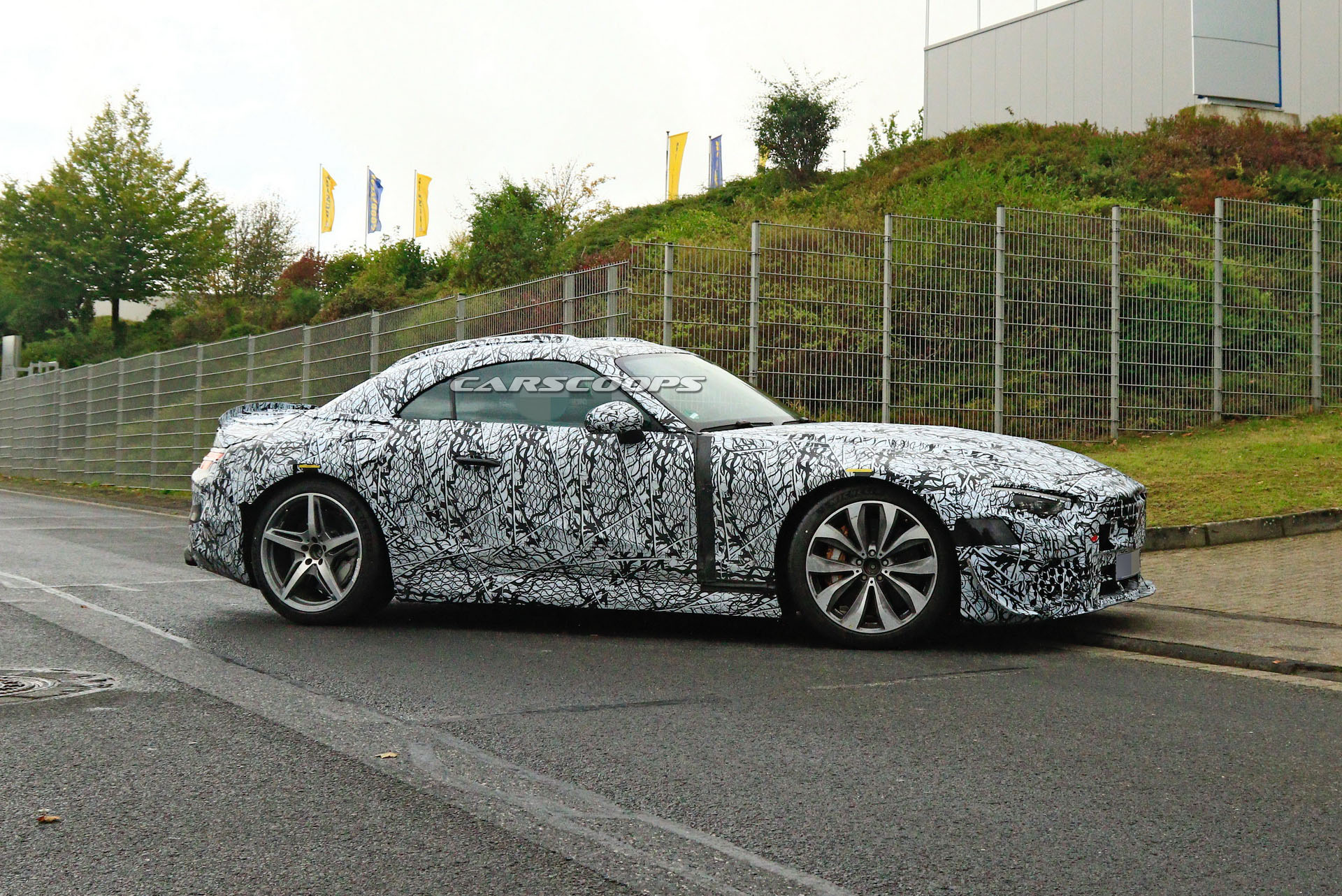 Underpinning the all-new Super Light will be the aluminum-intensive MSA (Modular Sports Architecture) which aims to reduce weight and increase sporting rigidity compared to the outgoing SL. The same architecture will be shared with the next iteration of the AMG GT as well.It’s believe that the new SL will have a slightly larger footprint than the car it replaces and which measures 180.8 in (4,592 mm) long, 73.9 in (1,877 mm) wide and 51.8 in (1,315 mm) tall.

Making most of its agile new platform will be a range of (unconfirmed) regular gasoline and hybridised engines.

These could include a 3.0-liter straight-six with more than 360hp for the base SL 43, followed by the SL 53 with a 3.0-liter turbocharged straight-six and the SL 53e sporting the same unit assisted by an electric compressor delivering at least 440 hp . Further up, we could find the SL 63 getting a 4.0-litre V8 in two states of tune, with the ‘S’ variant pumping out well over 600 horsepower, and a range-topping 800 horsepower, eight-cylinder plug-in hybrid in SL 73e format.

The latter will allow electric-only driving as with other PHEV’s, and 0-60 times could tumble below the 3-sec mark. Helping tame those 800 horses will be an all-wheel-drive system and a 9-speed automatic transmission. 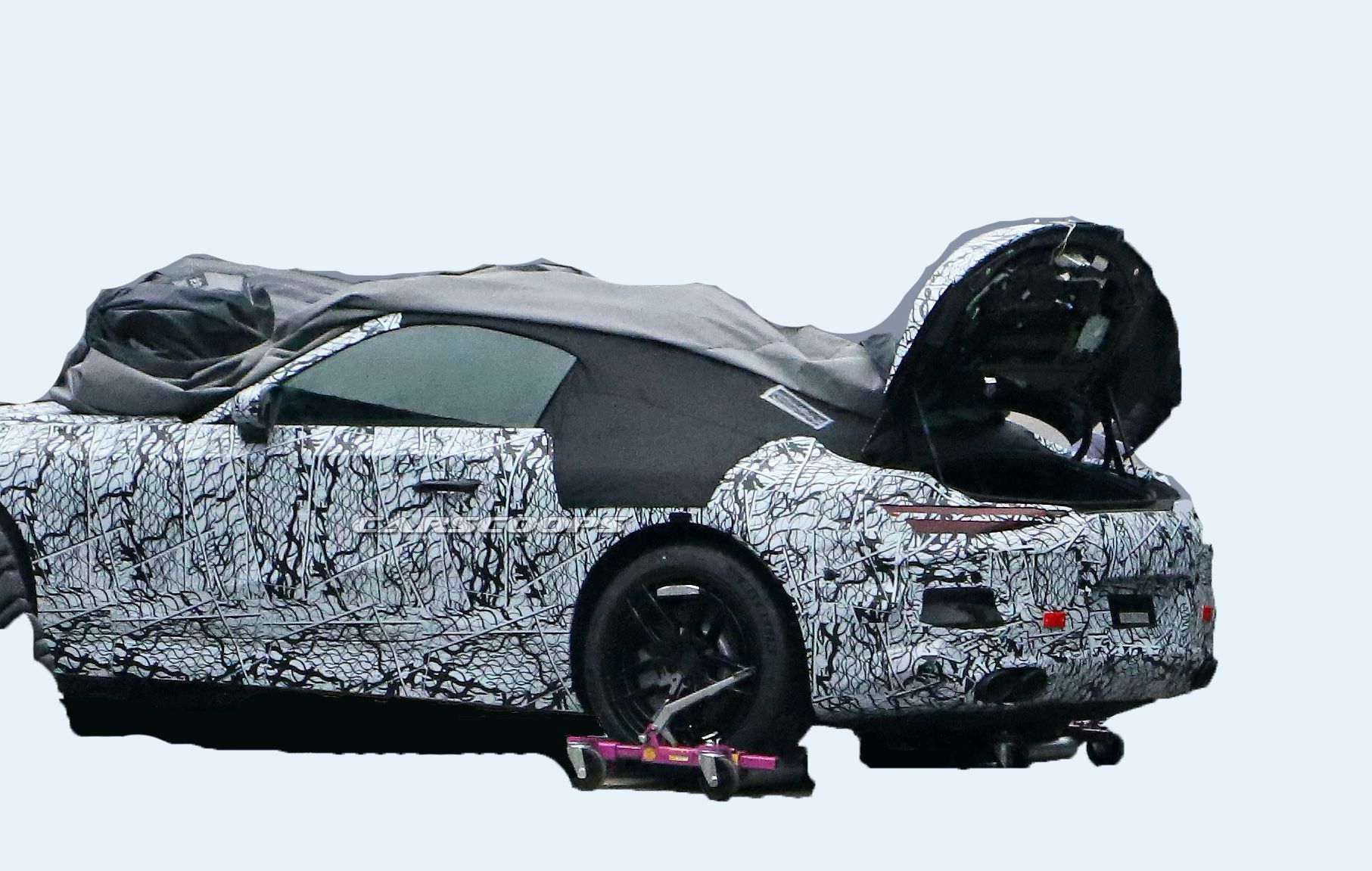 The 2022 SL sits amongst some very niche and elite competition. Such rivals include among others, BMW’s 8-Series, Jaguar F-Type, Porsche 911 and the stunning Lexus LC.

Exact launch timing is yet to be confirmed; however, it’s expected to make an official debut later this year with production starting at the carmaker’s Sindelfingen plant in 2021.

What are your thoughts on the new Mercedes-AMG SL? Share your views in the comments below.