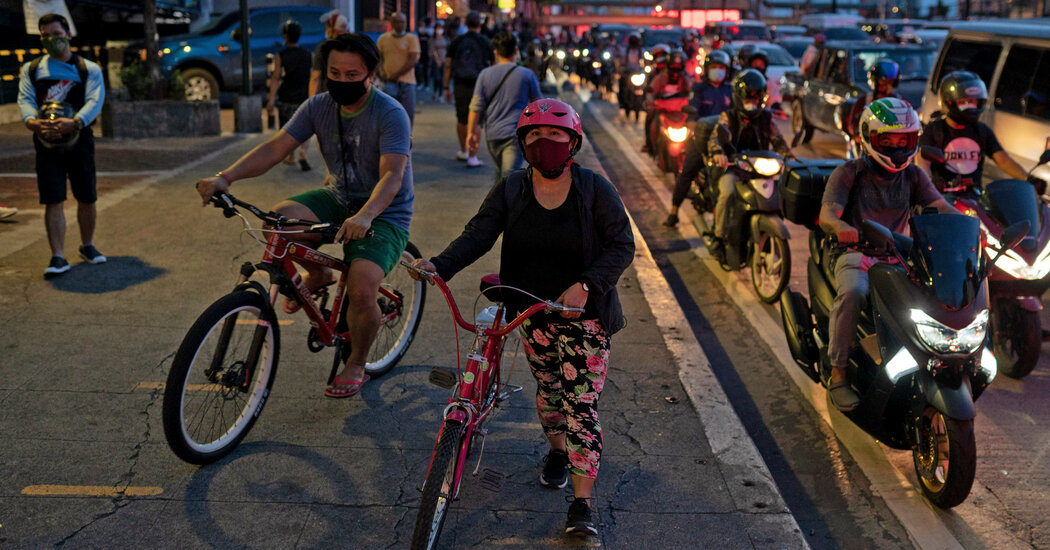 As the need for social distancing forces governments around the world to reduce public transportation service, city dwellers are hopping on bikes instead. Global bicycle sales have surged to the point where even Giant, the world’s largest bike maker, has struggled to fill orders.

In Manila, the cycling surge is notable because the Philippines has not only one of the highest numbers of coronavirus infections in Asia — more than 445,000, according to a New York Times database — but also some of the region’s worst urban congestion.

Last year, a study by the Asian Development Bank found that metro Manila, an area roughly six times the size of Paris, was the most congested of 24 cities that it surveyed across South and Southeast Asia. Japan’s development agency estimates that the cost of traffic to Manila’s economy is more than $72 million, or 3.5 billion Philippine pesos, a day.

Metro Manila was closed in March as part of a wider lockdown of Luzon, the country’s most populous island, imposed by President Rodrigo Duterte. When stay-at-home orders began to lift a few months later, public transit was still operating at limited capacity.

Some bus and train commuters started driving instead. But for many Manila residents, walking or cycling became their only means of getting to work.

Biking on Manila’s snarled, potholed roads can be hazardous, in part because some drivers regard cyclists as obstacles. Sidewalks, too, are often clogged with street vendors and makeshift parking areas. The Manila metropolitan area had 19 bicycle-related fatalities last year, according to official figures. By comparison, New York officials counted 28.

The government has been gradually easing restrictions on public transit in metro Manila since June. But by now, many commuters are hooked on cycling, and some downtown streets where vendors once sold vegetables and electronics are filled with bikes and accessories for sale.

The biking boom prompted Philippine officials to announce a plan in August to build a 400-mile bike lane network that would be financed through a pandemic-related stimulus fund.