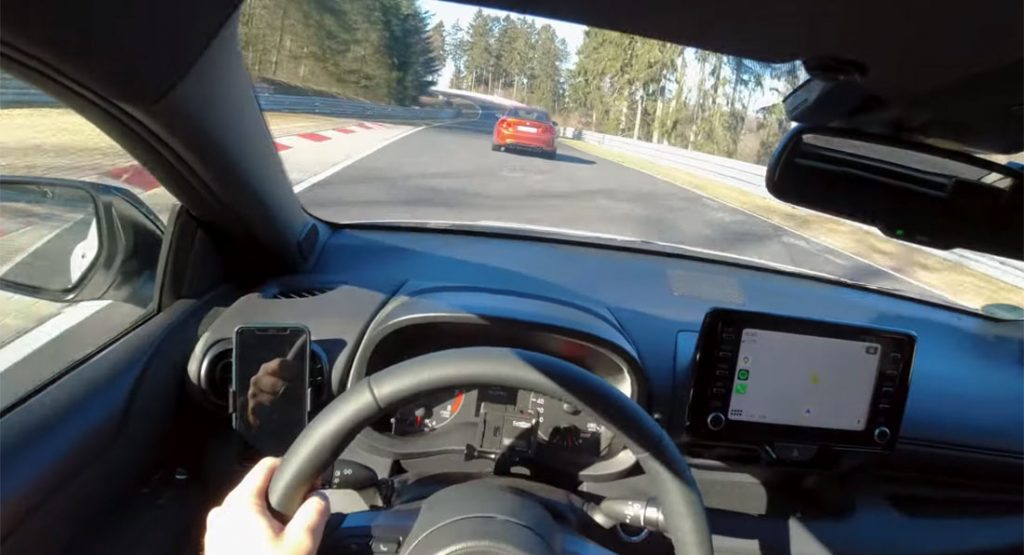 Toyota hasn’t set an official Nurburgring Nordschleife lap time with the potent GR Yaris (yet), but this video provides us with a good look at just how fast it is around the treacherous German circuit.

This particular GR Yaris is a customer-owned example and the driver shows very little fear tackling Green Hell, even though this was just his 14th lap at the circuit and just his second lap in the Japanese hot hatch. The car is so controllable at the limit and provides such good performance that the driver was able to keep up with a BMW M2 Competition throughout the lap.

A Bridge to Gantry lap set by another GR Yaris owner in late 2020 saw the car record a blistering time of 7 minutes and 56 seconds, just four seconds off the pace of a BMW M2 Competition driven by Sport Auto’s Christian Gebhardt back in September 2018.

Watch Also: See The Toyota GR Yaris Lap The Nurburgring Bridge To Gantry In Under 8 Minutes

Key to the Toyota’s performance is its punchy 1.6-liter turbocharged three-cylinder engine pumping out 257 hp and 265 lb-ft (360 Nm) of torque. Drive is then sent through all four wheels via a six-speed manual transmission and limited-slip differentials at both the front and rear.

The example featured in this video was equipped with the optional Circuit Pack that in addition to the LSDs, adds 18-inch forged wheels, performance-tuned suspension, and sticky Michelin Pilot Sport 4S tires.

A handful of aftermarket specialists have already started modifying the GR Yaris and if any of them take their cars to the ‘Ring, we could see some even quicker times.