Pictures of the upcoming Peugeot 308 have surfaced online, leaving the car wholly naked ahead of the French brand’s full reveal.

The French VW Golf-fighter appears to be nearly identical to one we saw almost entirely uncovered in spy pictures earlier this month. Both sporting the same shade of green on the outside, that car was still partially obscured by a cover.

These photos, shared to the Worldscoop forum as well as a myriad of other social media channels over the past few hours, reveal the back end of the compact model and the sculpted rear haunches. Again, we see the new Peugeot logo, designed to embrace the manufacturer’s move into more premium space.

The pictured compact model, helpfully, has the word “hybrid” written on the front license plate. Peugeot is expected to offer the 308 in both hybrid and plug-in hybrid variations and may even produce a spicy Peugeot Sport Engineered plug-in hybrid version with around 300 horsepower.

Sculpted lights that follow the bodywork fore and aft are integrated into the shape of the car. It’s a bolder look that follows on from the successful recipe of the well-received smaller 208 hatch. 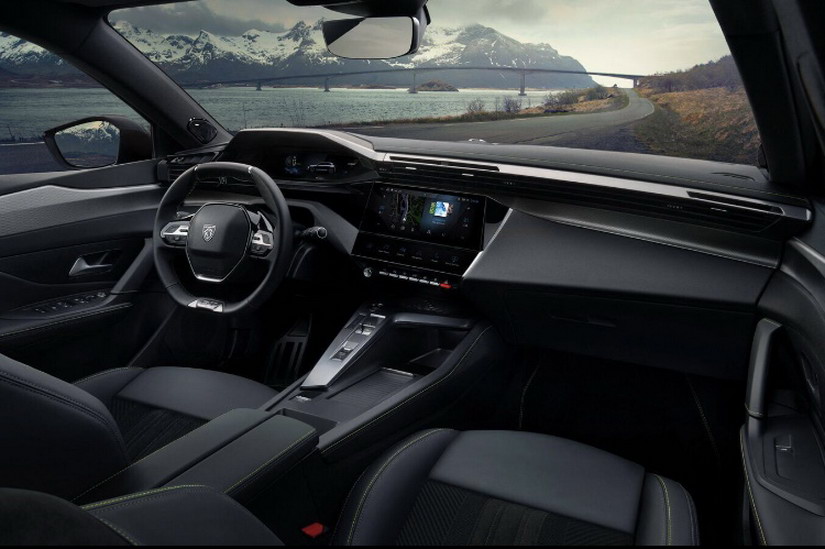 Overall, the new 308 is expected to have a slightly larger footprint leading to improved interior space, while the interior has an edgier look than the 3008 crossover with the prominent infotainment screen placed this time in the middle of the dash instead of floating on top.

Beyond the hatch, a wagon variant has also been spotted testing, though we’ll likely have to wait until later this year to see it.

Unfortunately, official details are still few and far between but Peugeot is expected to unveil the new, third-generation, 2021 Peugeot 308 soon, so stay tuned for more.