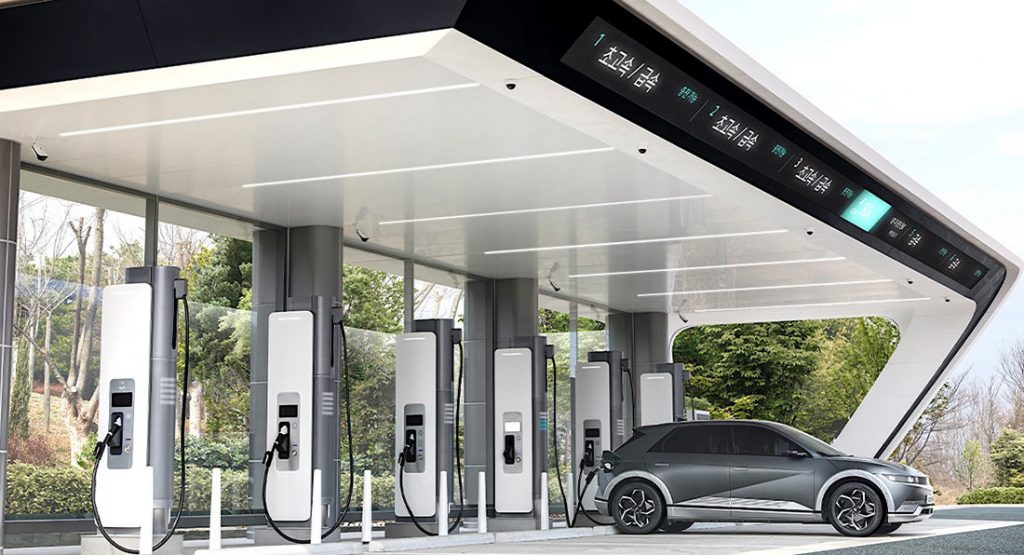 Hyundai has previewed one of the charging stations that it will establish across South Korea this year.

The car manufacturer’s charging station is dubbed an E-Pit and has been inspired by Formula 1 pit stops as owners of the company’s models with 800-volt charging capability can charge their vehicles to 80 percent within just 18 minutes. Compatible vehicles can also be charged for just 5 minutes and add 100 km (62 miles) of range.

Hyundai will establish 12 E-Pit stations with a total of 72 charging outlets at 12 highway rest stops throughout Korea this month. It will also construct a further eight stations with 48 chargers in urban centers throughout the country.

Read Also: Hyundai Ioniq 5 First Vehicle To Be Used By Motional For Its Lyft Robotaxi Fleet

Korea Times reports that Hyundai is also introducing a digital payment service that will allow users to pay recharging fees automatically through a mobile app. Having dedicated charging stations like these are particularly important in Korea as more than 60 per cent of people live in apartments and, therefore, cannot rely on recharging their vehicles at home.

It remains to be seen if Hyundai will construct similar charging stations in other countries.

The first vehicle from the car manufacturer to benefit from the fast-charging stations will be the all-electric Ioniq 5. It will be joined by the Kia EV6 that’s based on the same platform as the Ioniq 5 and shares many of its components. Later this year, Genesis will join the EV fray with the JW, which also uses the same platform as the Ioniq 5 and EV6.