Ferrari has finally revealed the name of its special edition 812: meet the new 812 Competizione and its drop-top sibling, the Competizione A. 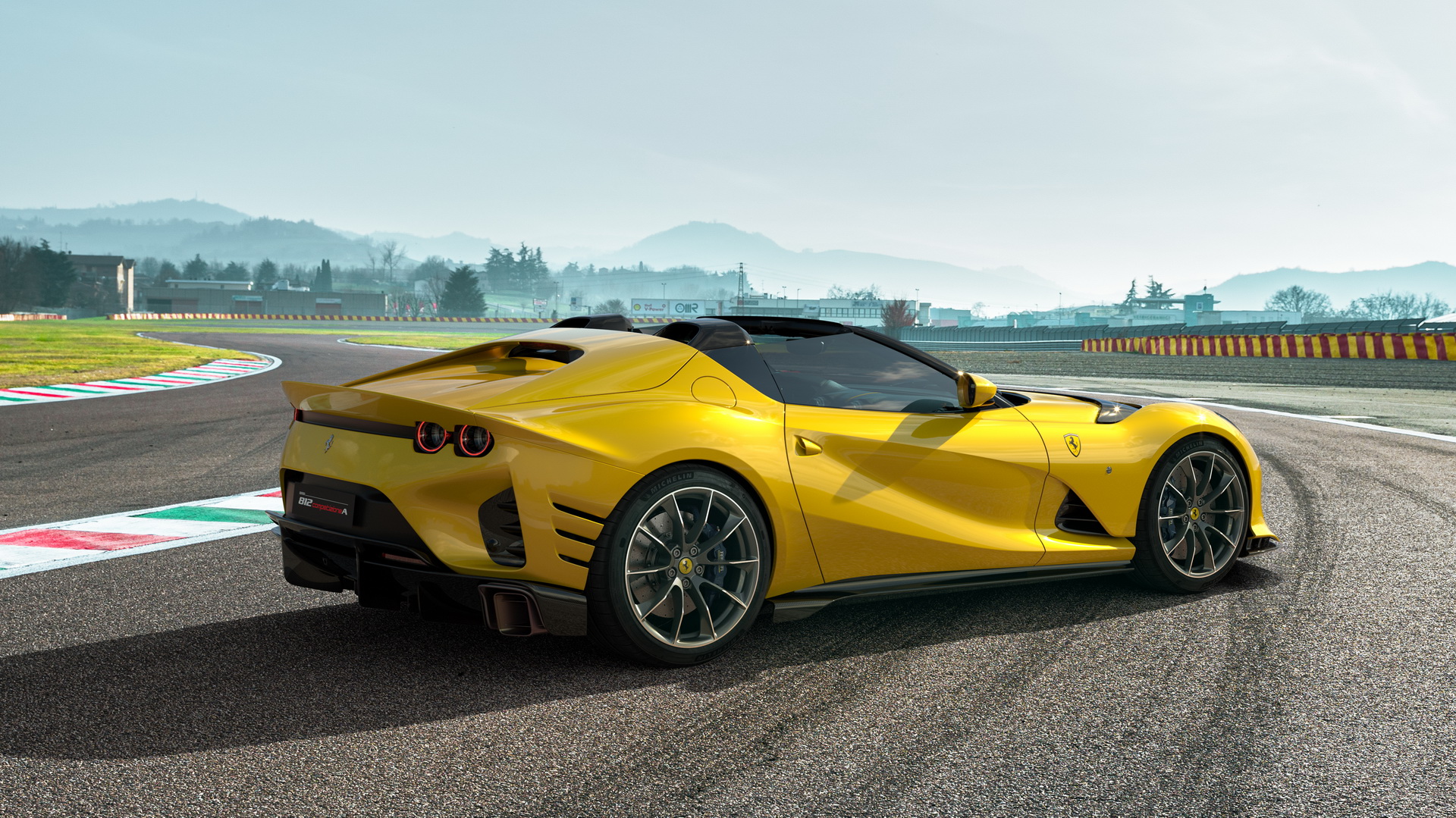 The seven-speed dual-clutch automatic transmission comes with new software that further reduces shift times by 5 percent, retaining the same ratios with the ‘regular’ 812 Superfast. Ferrari’s new 812 Competizione models claim a 0-62 mph (100 km/h) time in 2.85 seconds, while flat out they’ll do over 211 mph (340 km/h).

To make a 6.5-liter V12 spin its internals at that speed, Ferrari redesigned many of its components, including new titanium con-rods that are 40 percent lighter than those in the Superfast, and a new ‘diamond-like’ carbon coating on the camshafts and the pins inside the pistons for reduced friction and more durability.

The engine revisions also include a lighter and rebalanced crankshaft while the intake now features variable geometry inlet tracts. Add to that a new exhaust system that, despite having a mandatory petrol particulate filter for Europe, makes the Ferrari V12 scream as ferociously as ever.

The new exhaust employs rectangular pipes mounted at either end of the bumper, making room for the full-width rear diffuser, which accounts for 25 percent of the total increase in downforce over the regular model. The giant new diffuser works in “perfect aerodynamic synergy” with the new full-width rear spoiler as well, guaranteeing the maximum downforce possible over the rear axle.

The front spoiler features a passive mobile aero system, which opens at speeds over 155 mph (250 km/h), stalling the diffuser and allowing the 812 Competizione to reach its top speed. 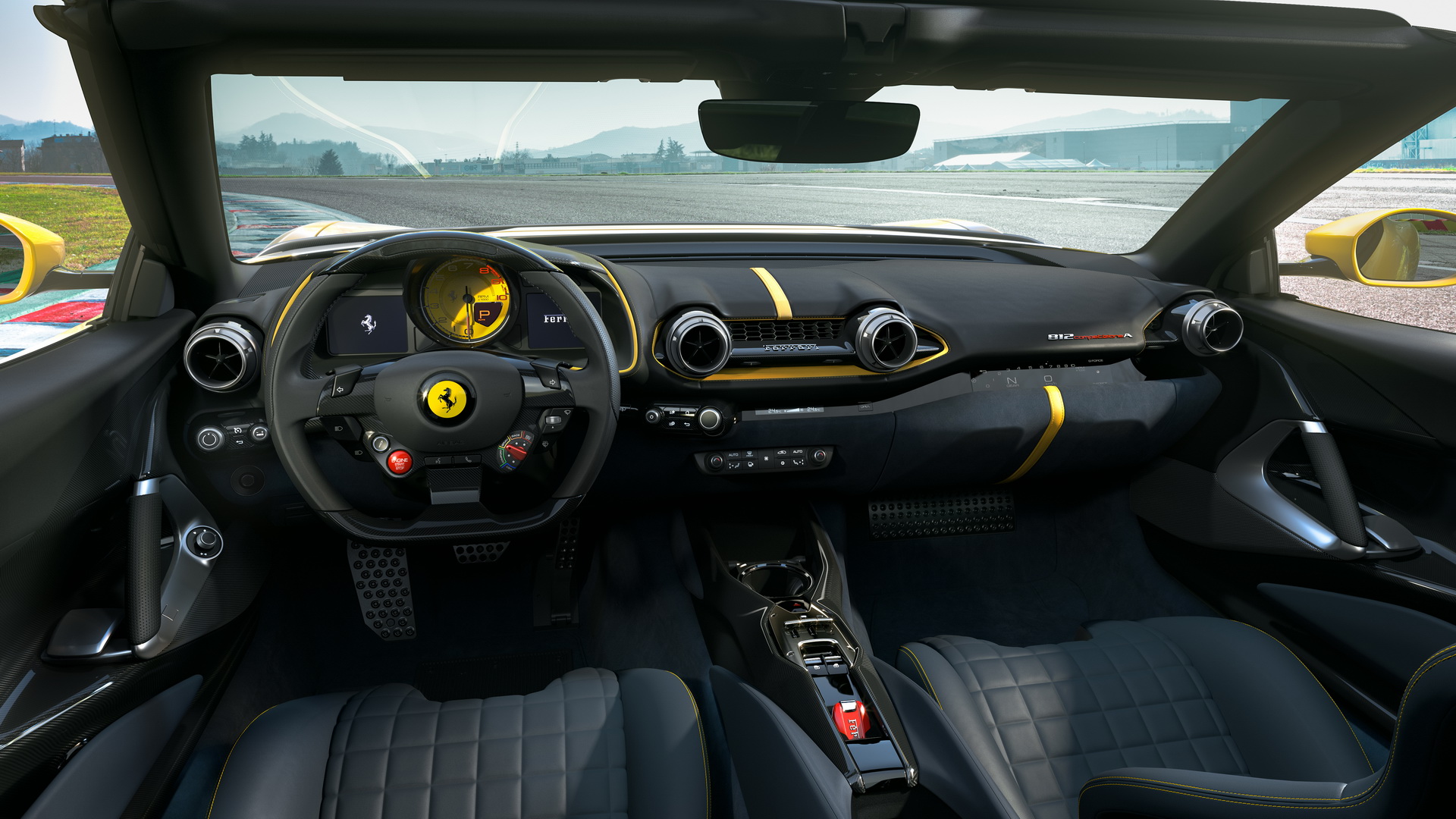 Ferrari was able to improve the cooling flow management on the 812 Competizione without increasing the dimensions and weight of the radiators. The engine air intakes are on either side of the central grille, while the evacuation of hot air was improved thanks to the vents on either side of the bonnet’s new central ‘blade’, and the louvers on the wings.

One of the most eye-catching features of the new Ferrari 812 Competizione is of course the new rear screen, which here is completely closed, freeing up space for some new aerodynamic solutions. These include three pairs of protruding elements that act as vortex generators, in order to distort the flow and redistribute the rear axle’s pressure field. Part of the flow is deflected towards the sides of the rear spoiler, boosting downforce and improving the efficiency of the diffuser. Ferrari says that these vortex generators “guarantee” 10 percent of the total increase in rear downforce, compared to the Superfast.

Other go-faster components include Ferrari’s latest Side Slip Control v. 7.0, an independent rear-wheel steering system with a new electronic management system that allows the right and left actuators to be operated individually, a set of bespoke Michelin Cup 2 R tires wrapped on all-carbon-fiber wheels, and more.

Ferrari says that it was able to reduce the weight of the 812 Competizione by 38 kg (84 lbs) compared to the Superfast, at 1,487 kg (3,278 lbs) dry, thanks to the new materials and components used in the powertrain, running gear, and bodywork.

While the new 812 Competizione and Competizione A models are described by Ferrari as “dedicated to a very exclusive group of collectors and enthusiasts of the most noble of Ferrari traditions”, they didn’t reveal exactly how many of them will be produced. If the past is any indication, we’d say that the drop-top Competizione A will be the rarer one, if you care for that sort of thing.