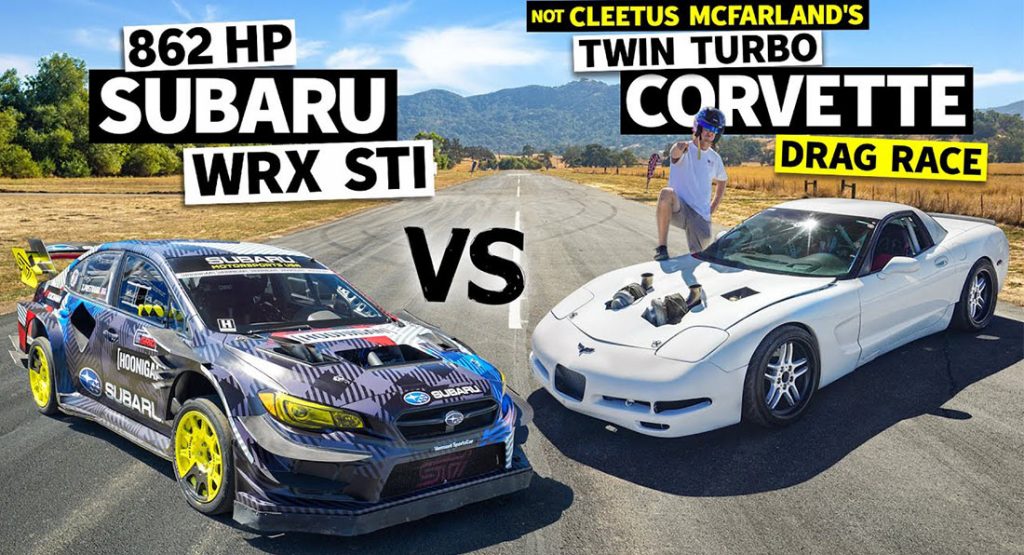 If you have a spare 15 minutes, this video featuring YouTuber Cleetus McFarland racing a twin-turbocharged C5 Corvette against Travis Pastrana and his Subaru WRX STI from Gymkhana 11 is well worth a watch.

For those that don’t know, McFarland is the proud owner of the world’s quickest stick-shift Corvette and while he didn’t bring it along for this video from Hoonigan, he did show up in a friend’s C5 Corvette.

This Vette’s engine internals have been kept stock but a pair of turbochargers have been bolted on, allowing it to pump out no less than 850 hp. Coupled to the V8 is the stock six-speed manual transmission powering the rear wheels.

By comparison, Pastrana’s WRX STI Gymkhana car is a lot more advanced. It rocks a 2.3-liter four-cylinder engine with a single turbocharger and pushes out 862 hp. Despite having half as many cylinders and turbochargers, it features a sequential transmission and all-wheel drive.

In the first race, McFarland struggles for traction and Pastrana takes an easy victory. To even things up for the second race, McFarland starts from a 25 mph roll while Pastrana starts from a dig the moment the Corvette cruises past him. This results in an exceptionally close race and while the Corvette does claim victory by a car length, the Subaru was closing in quickly. In the third and final race, the two cars were even closer and crossed the finish line at almost exactly the same time.