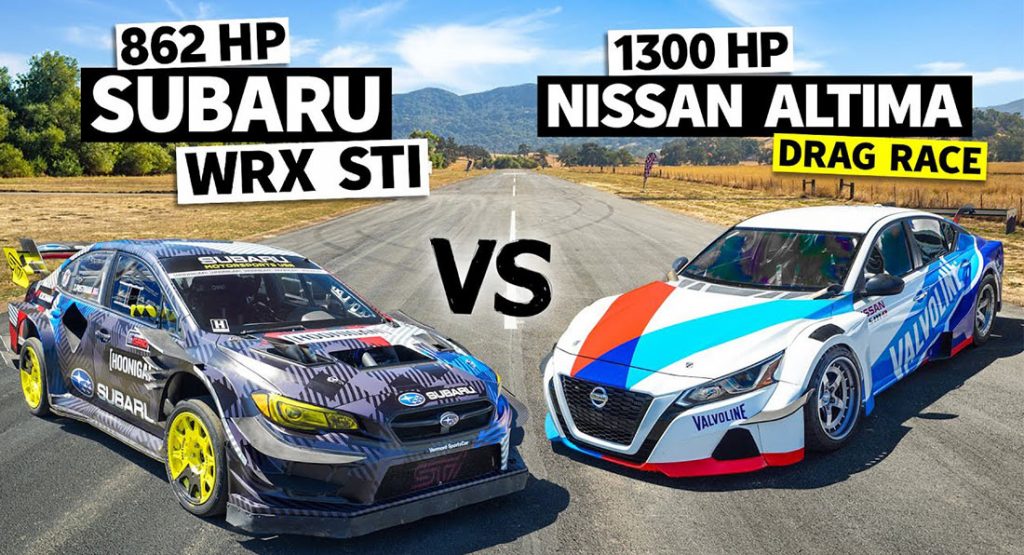 The Subaru WRX STI built for Travis Pastrana and Gymkhana 11 is a phenomenal performance machine and was recently brought out to Hoonigan’s drag strip for some races against an equally-as-unique Nissan Altima.

The Altima in question is owned by Formula Drift champion Chris Forsberg and has been comprehensively modified for drifting. However, that doesn’t mean it is a slouch in a straight-line as it recently proved when out-sprinting a modified Dodge Charger Hellcat with 1,000 hp and drag radial tires.

Key modifications made to this Altima include the fitment of a 3.8-liter twin-turbocharged V6 from a Nissan GT-R that, depending on the state of tune, can deliver as much as 2,000 hp but is currently rocking around 1,300 hp. It absolutely loves to spin up the rear wheels and produces an intoxicating sound.

In the other corner is Pastrana’s WRX STI. It was built by Subaru Motorsports USA and Vermont SportsCar and features a custom boxer engine bored out to 2.3-liters complete with a billet engine block and the crankshaft from Subaru’s RallyCross program. It also has billet heads, a twin timing belt system and a huge turbocharger, and delivers no less than 862 hp. While that’s considerably less than Forsberg’s Altima, the Subaru has the advantage of being all-wheel drive.

Thanks to the Subaru’s better traction, it launches much better than the Altima and takes the first two races with ease. However, a rolling race is then held between the pair and in this case, it was the Nissan that pulled away from the Subaru and claimed the win.