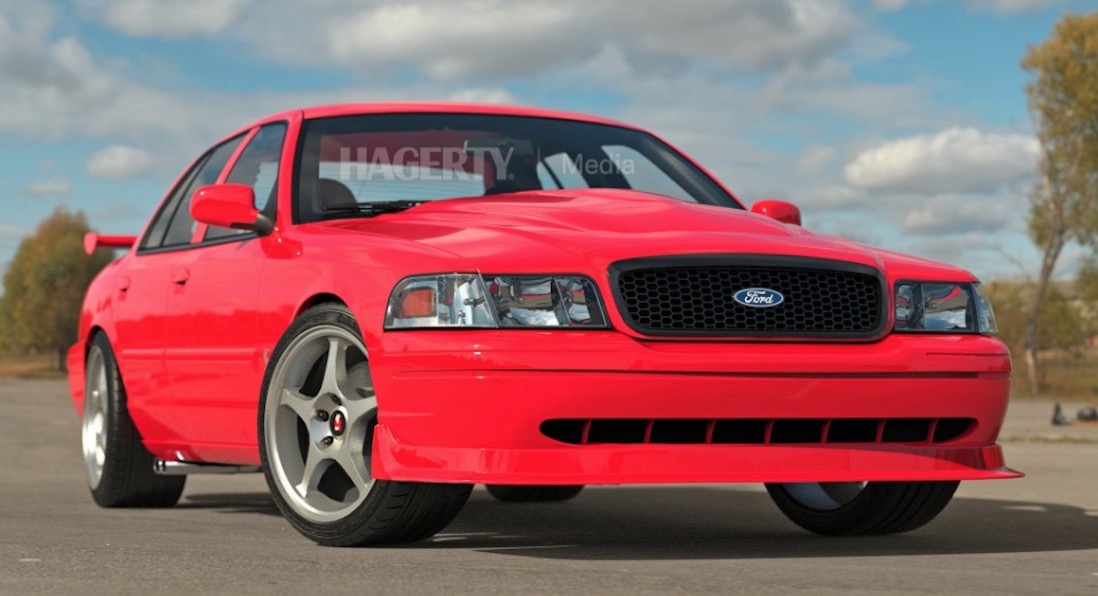 Ford’s fabled Crown Victoria is retired from police service, but memories of the sight of one in your rear view mirror or poking out from behind a billboard at the side of the road is still enough to strike fear into the heart of any speeder.

Things is, even in Interceptor guise, the Crown Vic wasn’t all that speedy. I know this because back in 2006 I got arrested for doing 106 mph in Georgia in a BMW Z4M Roadster and the cop admitted it had taken forever to catch up. But he would have been able to haul me in much sooner if he’d been driving this Crown Victoria Cobra R.

Sadly for Douglasville Police, Ford never built a Cobra R Crown Vic. This one’s a pure fantasy from talented designer Abimelec Arellano and the twisted mind of Hagerty’s Jack Baruth, who’s dreamed up a road test of the Cobra purporting to have been published in the December 1999 issue of fictional magazine, Car and Steerer.

In place of the real car’s 16-valve 4.6-liter V8, Abimelec imagines it with the 32v DOHC 5.4 from the Mustang Cobra R, and takes inspiration from the same Mustang for the Crown Vic’s body transformation.

So it’s coated in bright red paint and features a mean-looking hood bulge, chunky five-spoke wheels, a side exhaust, and a large wing on the trunk lid. Inside, the living room couch that Ford tried to pass off as a front seat is replaced by a pair of aggressively shaped buckets, and to make the most of the V8’s 385 hp there’s even a floor-shifted manual transmission, something the real Crown Vic never offered.

The nearest Ford came to offering anything like this was the 2003-2004 Mercury Marauder, which was built on the same Panther platform as the Crown Vic. An initial 2002 concept promised a supercharged 4.6 SOHC V8 developing 335 hp, but by the time it made it to the street, that had been sidelined in favor of a DOHC 4.6 with 302 hp.

Car and Driver recorded an unimpressive 7.5 seconds to 60 mph and 15.5 seconds to the quarter mile, while the top speed was limited to a laughable 117 mph to avoid driveline vibrations. The Hagerty/Abimelec Cobra R’s 4.7-second, 13.2-second and 170 mph numbers sound far more like it.

What do you think? Should Ford have built a Crown Victoria Cobra R back in 1999?

Note: These renderings were created by Abimelec-Design / Hagerty and are not related to or endorsed by Ford