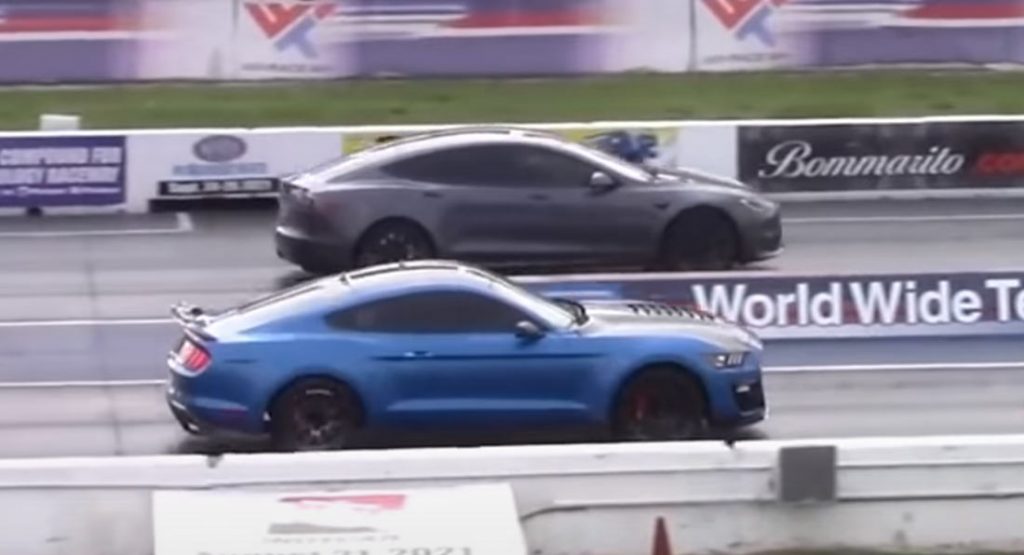 With customer deliveries of the Tesla Model S Plaid well under way, it’s hardly a surprise that videos of the EV being put to the test on the drag strip have started to flood the net.

As expected, the tri-motor electric powertrain of the Model S Plaid makes it astonishingly quick. So quick in fact that it can hit 60 mph (96 km/h) in less than 2 seconds (with 1 foot of rollout…) and launch down the quarter-mile in around 9.2 seconds, making it the quickest production car right now.

With this in mind, does an internal combustion engined car have any hope of beating a Model S Plaid down the drag strip?

Read Also: The Ford Mustang GT500 Might Be As Powerful As The Hulk, But It’s As Clever As Bruce Banner

If we’re talking stock cars, it’s hard to think of something; however, if we include modified cars, a tuned Ford Mustang Shelby GT500 can apparently get the job done.

The Shelby GT500 featured has been modified to pump out 1,100 hp, significantly more than the 760 hp which its 5.2-liter supercharged V8 ordinarily delivers. It was lined up against a Model S Plaid for a series of rolling drag races at the recent MITM Elite event.