The entry-level crossover segment is booming, but the sad truth is that most models aren’t terribly exciting.

Given that crossovers are designed to appeal to price conscious consumers, performance and driving dynamics have largely taken a backseat to more practical considerations such as size and cost.

However, there are exceptions and one of the most notable is the Mazda CX-30 which spices up a rather bland segment with a stylish design as well as an optional turbocharged 2.5-liter engine. 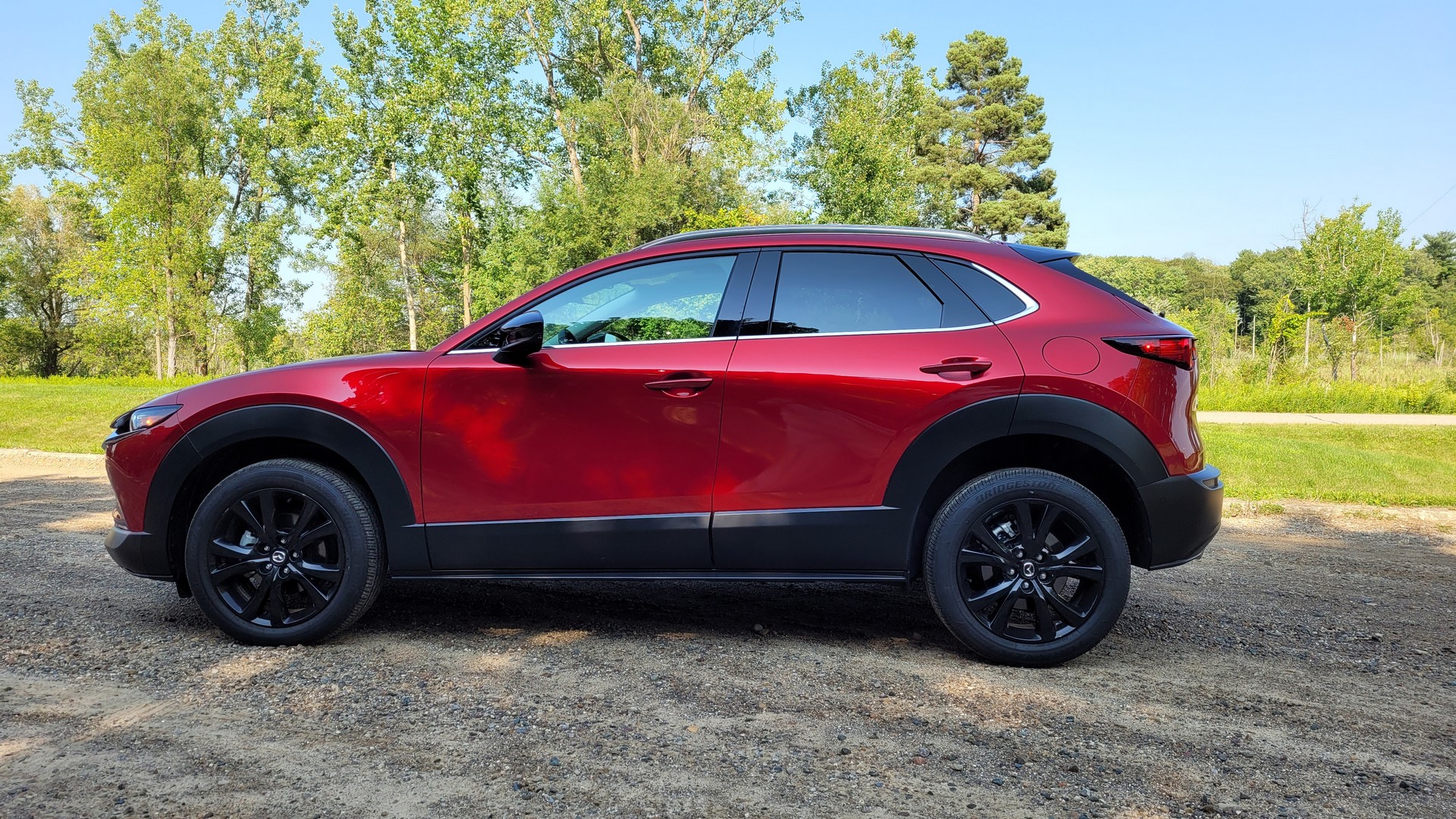 While many mainstream crossovers look dull, Mazda has bucked that trend with the stylish CX-5 and CX-9. The CX-30 continues that legacy as the model features subtle curves and streamlined surfaces.

The end result is a good looking vehicle that blurs the line between crossover and hatchback. In particular, it features all of the usual crossover styling cues as well as an additional 2.5 inches (64 mm) of ground clearance over the Mazda3 Hatchback.

The CX-30 2.5 Turbo builds on the standard model and is distinguished by a gloss black grille, gloss black mirrors and 18-inch alloy wheels with a gloss black finish. While few people will likely notice the dual exhaust system has slightly larger tailpipes, there’s no mistaking the turbo badge on the liftgate. 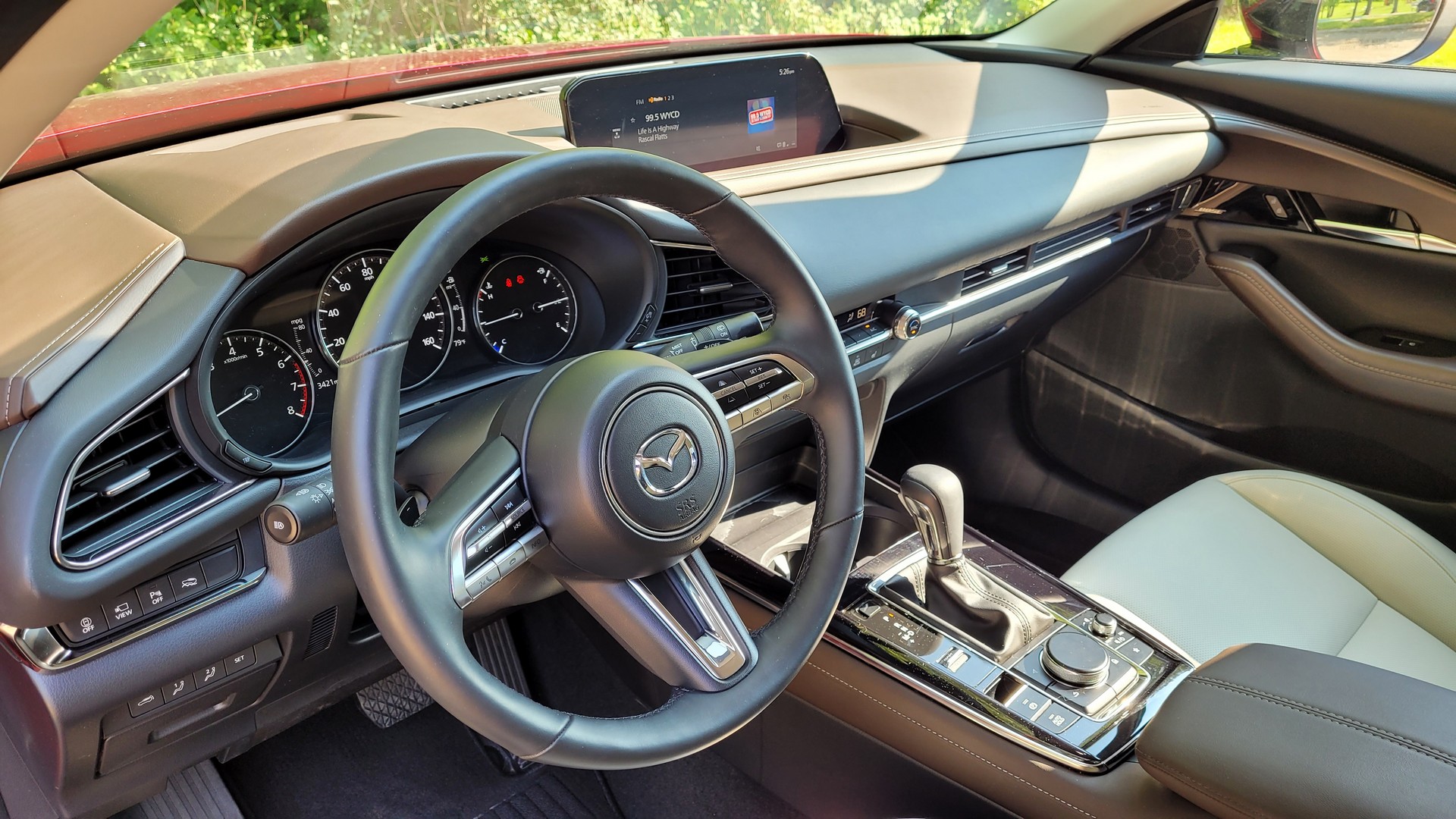 In order to keep prices low, many automakers give their entry-level crossovers a dreary interior filled with black plastic. Mazda breaks from this tradition as the CX-30 2.5 Turbo Premium Plus has a beautiful cabin with perforated white leather seats that contrast with black and brown accents.

That’s just scratching the surface as the model features an elegant swath of metal trim as well as soft-touch materials that cover virtually every surface. The attention to detail is impressive and feels more at home in a luxury vehicle than a mainstream crossover.

Other highlights include a heated leather steering wheel, carbon-effect trim and a 12-speaker Bose audio system. All of this makes for a classy cabin that certainly doesn’t feel entry-level. 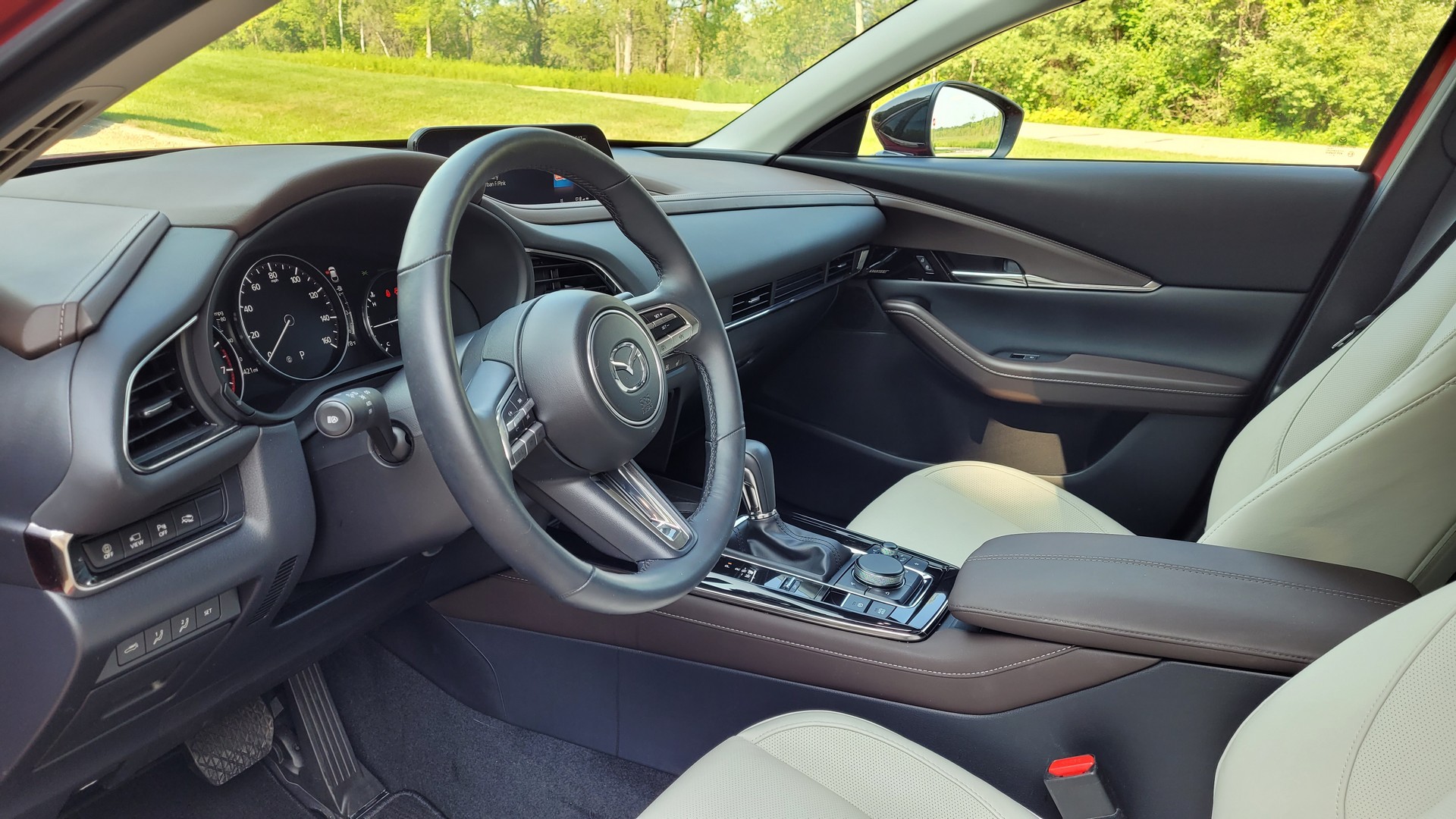 Once seated in the spacious and supportive driver’s seat, owners will find themselves looking at a 7-inch display that is flanked by analog gauges. The central display is reconfigurable, but Mazda doesn’t make much use of it as there are only a handful of display options. On the bright side, the speedometer shows a red mark next to the posted speed and that’s far more useful than a speed limit sign up in the corner.

Speaking of displays, the CX-30 has an 8.8-inch infotainment system which is set far back on the dash. It’s not a touchscreen, but the system is intuitive to use as everything is controlled by a twist or push of a dial. Designers also threw in dedicated buttons – back, navigation, audio and home – which can be used without having to take your eyes off the road. 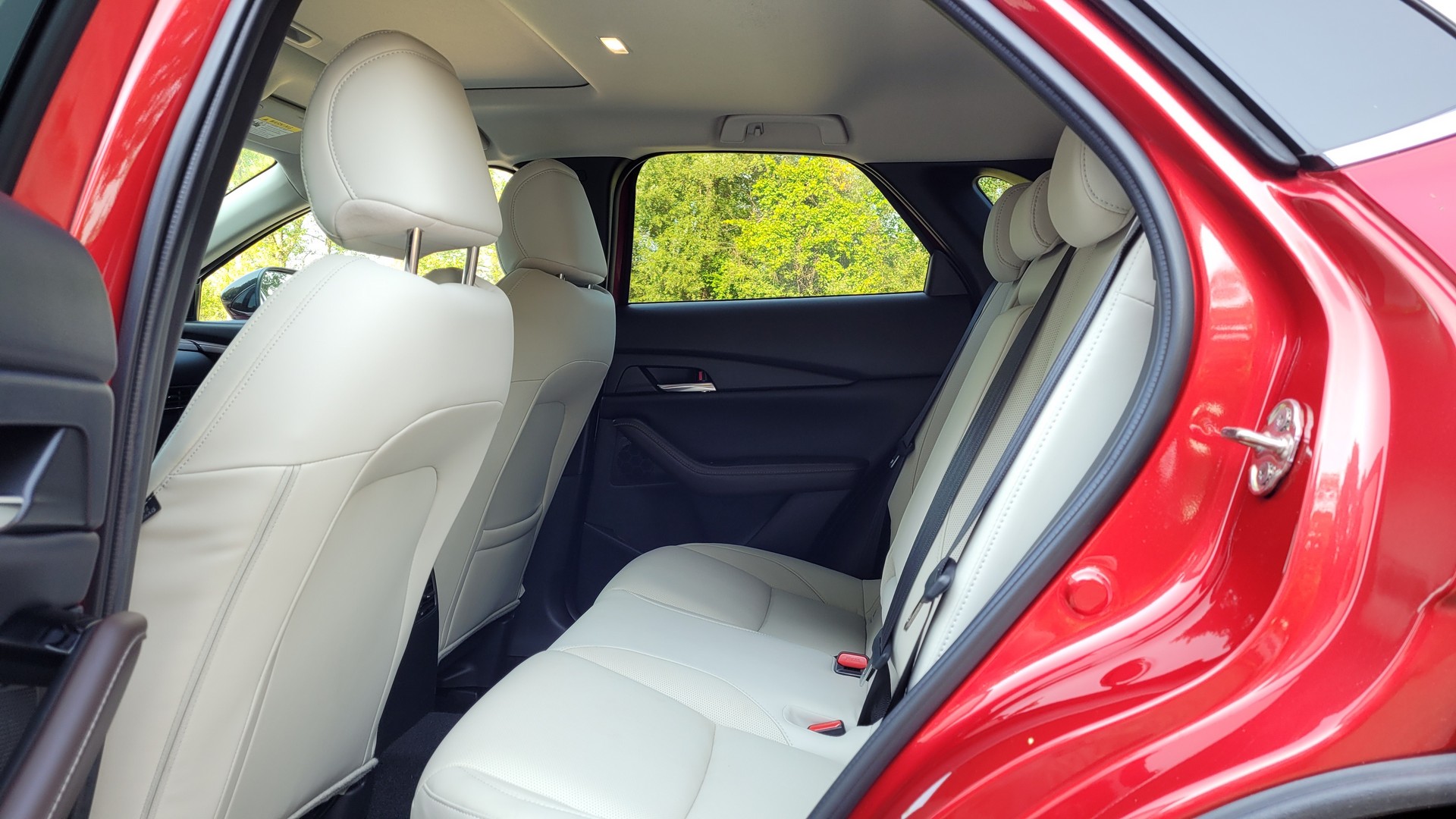 While there’s a lot to like about the interior, the back seat is small and this 6’ 2” reviewer could barely cram himself behind the adjusted driver’s seat. However, once you get settled, there’s a surprising amount of legroom underneath the front seats. Of course, if you’re like me, you won’t want to spend a lot of time in the second row as headroom is limited and your knees will be jammed up against the front seat backs.

Speaking of space, there’s 20.2 cubic feet (572 liters) of luggage room. That can be expanded by folding the rear seats down, although there are no releases in the cargo area.

A Mainstream Crossover For Enthusiasts 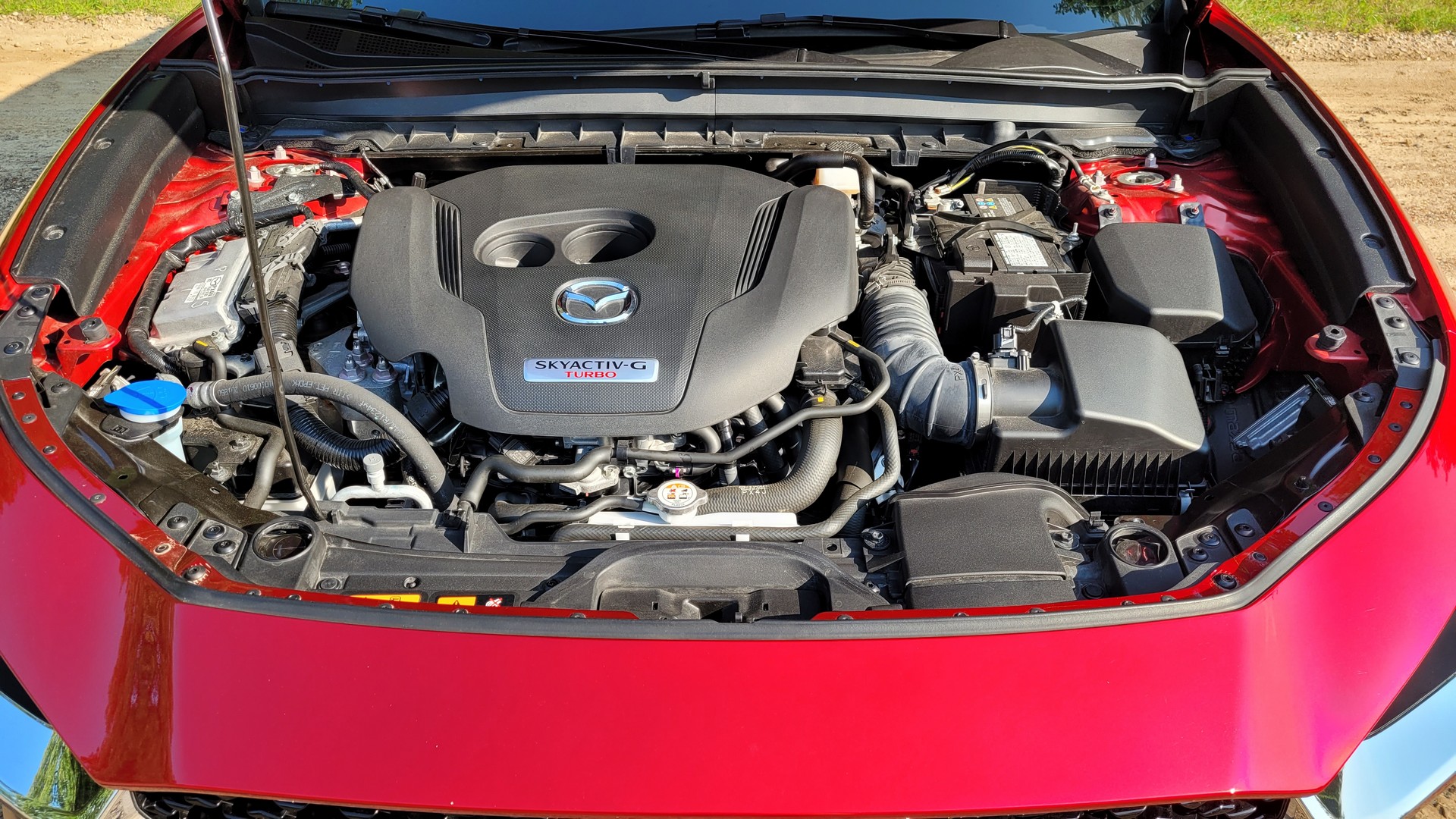 Given those numbers, its little surprise the CX-30 Turbo is quick on its feet and feels downright playful in Sport mode. While Mazda doesn’t list a 0-60 mph (0-96 km/h) time, tests have shown the crossover can accomplish the task in 5.8 seconds which is a full 2.2 seconds faster than the standard model. 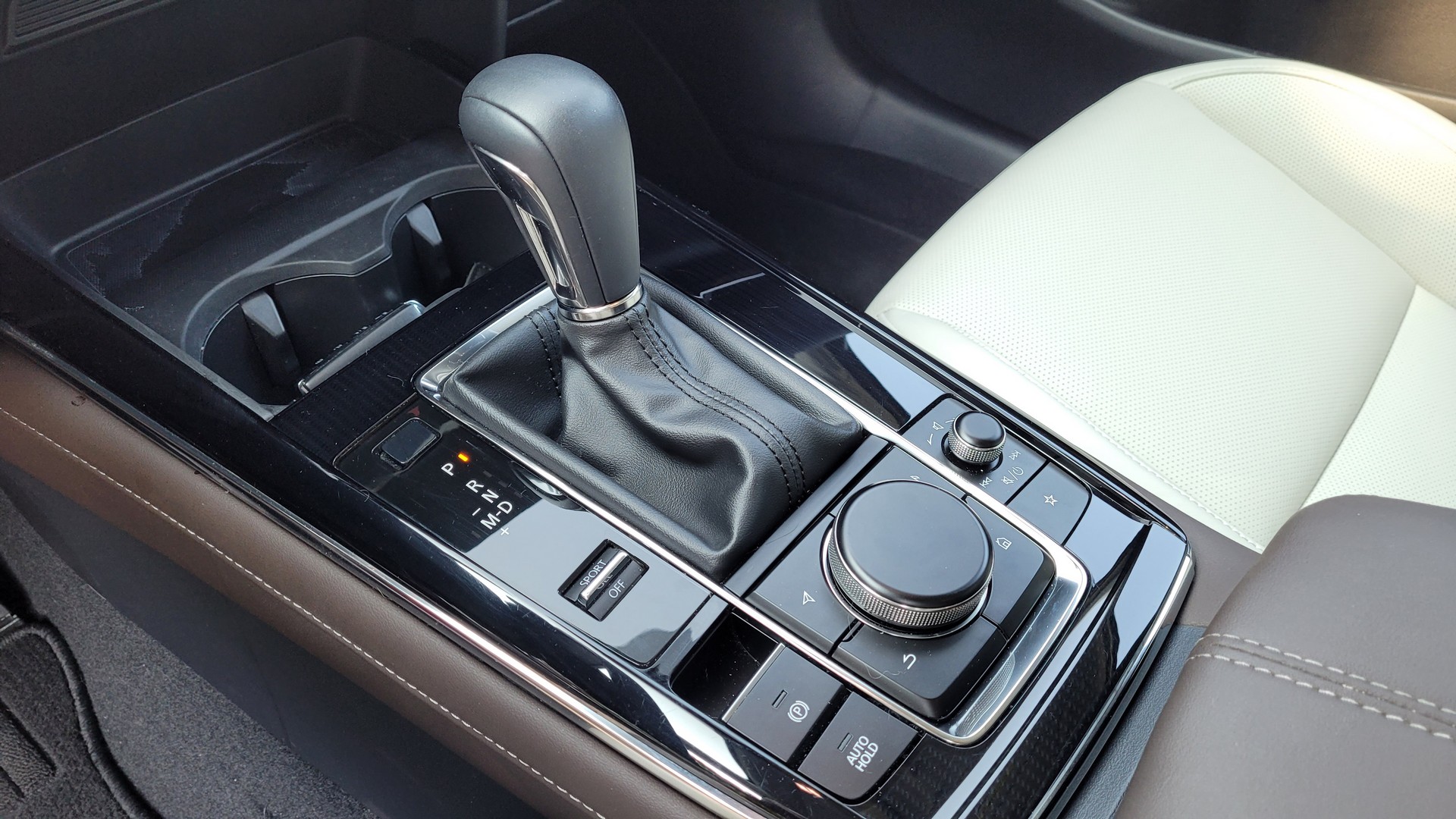 Despite the impressive performance, there isn’t much of a penalty at the pump as the crossover returns an EPA-estimated 22 mpg city, 30 mpg highway and 25 mpg combined. That’s slightly less than the naturally aspirated model’s rating of 24 mpg city, 31 mpg highway and 26 mpg combined with all-wheel drive. We averaged 24.9 mpg combined, but drivers can expect higher numbers as our tester was idled extensively for photo and video shoots.

The responsive engine is connected to a perfectly capable six-speed automatic transmission with a manual mode as well as paddle shifters. It delivers fast and smooth shifts, and Sport mode will hold onto gears for longer. While it might not have an eye-popping number of cogs, it’s a good gearbox and notable for being a ‘proper’ automatic rather than a continuously variable transmission, which is common in the segment.

All-wheel drive comes standard on the CX-30 Turbo and the system delivers plenty of grip. The model also has an Off-Road Traction Assist function, which helps to reduce wheel slip and direct power to the wheels with the most traction. Of course, that’s probably overkill as CX-30s will populate malls instead of Moab, but it’s a welcome feature nonetheless.

Performance Changes Are Largely Limited To The Engine Compartment 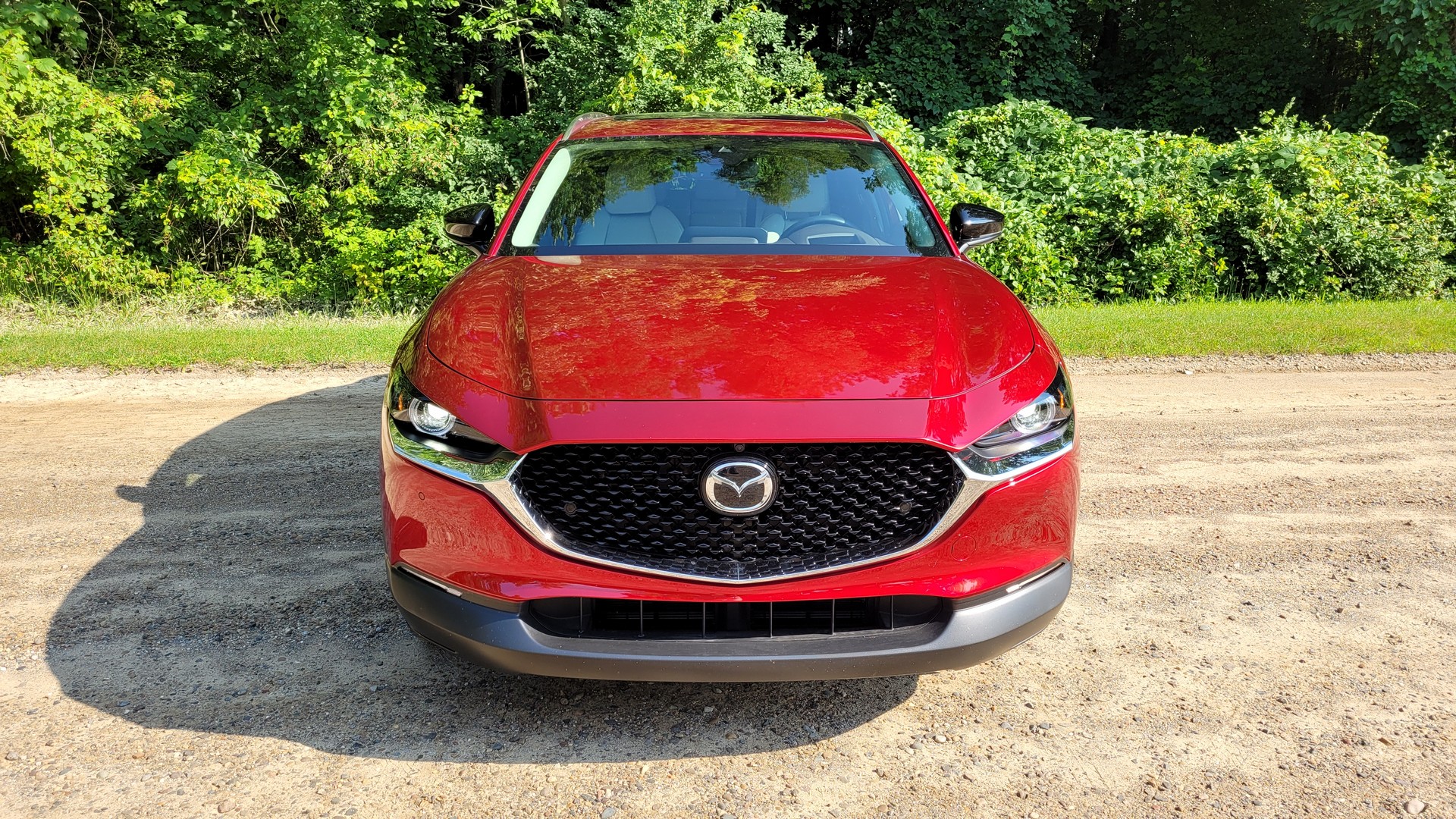 One of the first things you’ll notice when you drive the CX-30 is that it feels remarkably solid. That’s a rarity in the segment and it makes the crossover feel substantial.

The CX-30 rides on the same platform as the Mazda3 and the suspension is nearly identical to the one found on the naturally aspirated model as it features MacPherson struts up front as well as a torsion beam out back. As a result, customers expecting sportier handling will be disappointed as the suspension is only “slightly stiffer” to account for the heavier turbocharged engine.

However, there’s nothing to complain about as the crossover is a capable handler that can be chucked into corners with ease. All-wheel drive and G-Vectoring Control Plus help things along and the experience is pretty rewarding for an entry-level crossover. 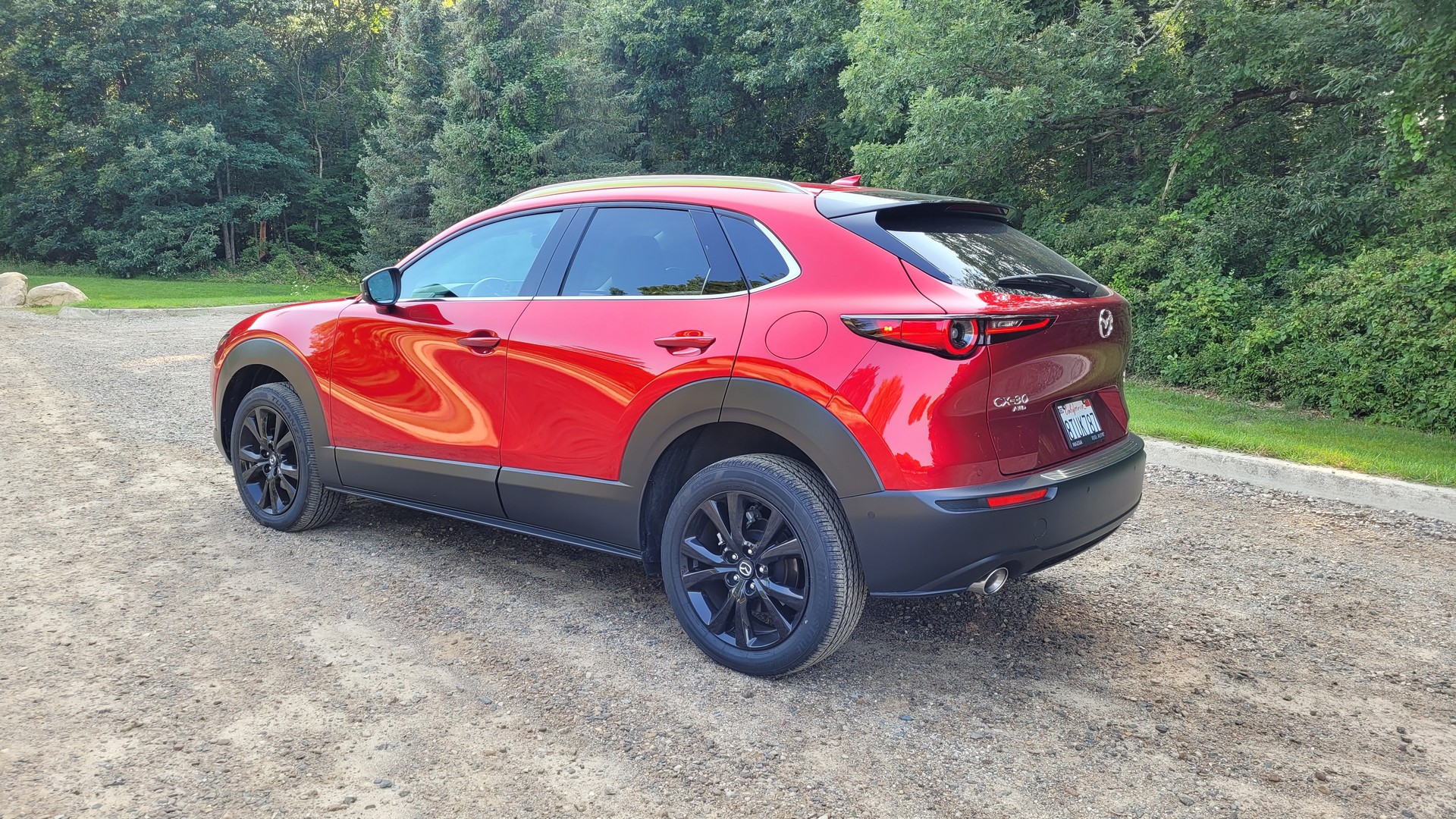 Speaking of dynamics, the rack-and-pinion steering system has a good amount of heft and the steering wheel provides excellent feedback. More importantly, it’s responsive and gives the model a sporty flair.

As for the ride, it’s mostly good news as the CX-30 Turbo easily deals with minor road imperfections. There were a few impacts that seemed a bit harsh, but the overall experience is positive as the crossover offers a slightly firm and quiet ride. 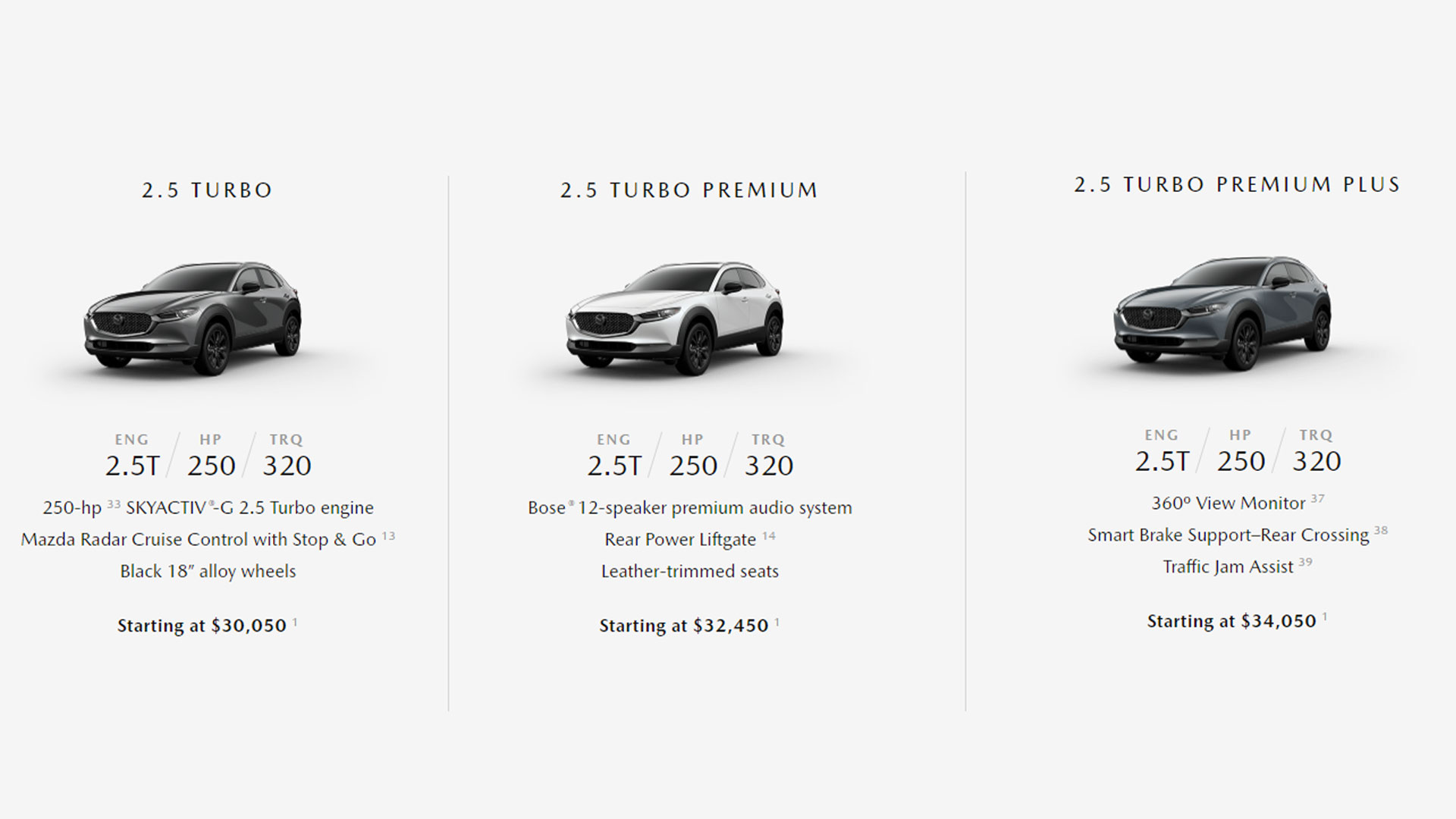 While the standard CX-30 starts at $22,050, the turbocharged variant begins at $30,050. That’s pretty pricey, but it comes nicely equipped with LED headlights, rain-sensing wipers and 18-inch alloy wheels with a black finish.

The cabin features a leather-wrapped steering wheel and heated leatherette front seats with eight-way power adjustment on the driver’s side. Other highlights include a dual-zone automatic climate control system, a moonroof and a frameless auto-dimming rearview mirror. They’re joined by an eight-speaker audio system, an 8.8-inch Mazda Connect infotainment system, and a 7-inch display in the instrument cluster. As for driver assist tech, there’s Mazda Radar Cruise Control with Stop and Go, Lane Departure Warning, Lane-Keep Assist, and a Blind Spot Monitoring system with Rear Cross-Traffic Alert.

The CX-30 2.5 Turbo Premium starts at $32,450 and is a worthwhile upgrade as it adds leather seats, a heated steering wheel and GPS navigation. Other niceties include a power liftgate, paddle shifters and a 12-speaker Bose audio system. The model also boasts an informative head-up display, traffic sign recognition technology and an adaptive front lighting system.

Lastly, there’s the range-topping CX-30 2.5 Turbo Premium Plus which costs a whopping $34,050. It gains an auto-dimming driver’s side mirror, Homelink, front / rear parking sensors and a 360° View Monitor. They’re joined by Rear Cross-Traffic Braking and a Traffic Jam Assist system, which provides steering inputs at speeds under 40 mph (64 km/h) to help drivers stay in their lane.

Thanks to a handful of options, our tester stickered at $35,995 including a $1,100 destination charge. That’s pretty steep and it’s worth mentioning the model didn’t even have a wireless smartphone charger which is a $275 option.

Performance Comes At A Price

At the end of the day, the Mazda CX-30 Turbo is a stylish crossover that offers impressive performance and one of the nicest interiors in its class. Throw in good driving dynamics and a decent ride, and there’s a lot to like about it.

However, everything isn’t perfect as the rear seats are a tight fit for adults and the $30,050 base price is lofty when you consider Mazda offers a CX-5 Turbo Carbon Edition for $30,760. While that particular model comes standard with front-wheel drive, buyers will find a more spacious interior with standard leather as well as equipment – such as a power passenger seat – that isn’t even available on the CX-30.

While the price tag makes the CX-30 Turbo a bit of a tough sell, it’s certainly one of the more interesting entries in the segment and is a good choice if you don’t need extra interior room.