The auto industry is undergoing a major transition as the era of the internal combustion engine is coming to a close.

While a number of companies are going electric, that isn’t the only option as fuel cells are waiting for their moment in the spotlight. Hyundai is shining some on them today with a Hydrogen Wave event, which aims to popularize the eco-friendly technology and usher in a new ‘wave’ of hydrogen-powered products.

There’s a lot to cover, but the Hyundai Motor Group believes they will be able to offer fuel cell vehicles at a price point that is comparable to battery electric vehicles by 2030. This would be a big change as the Hyundai Nexo starts at $58,935⁠ while the Toyota Mirai begins at $49,500. 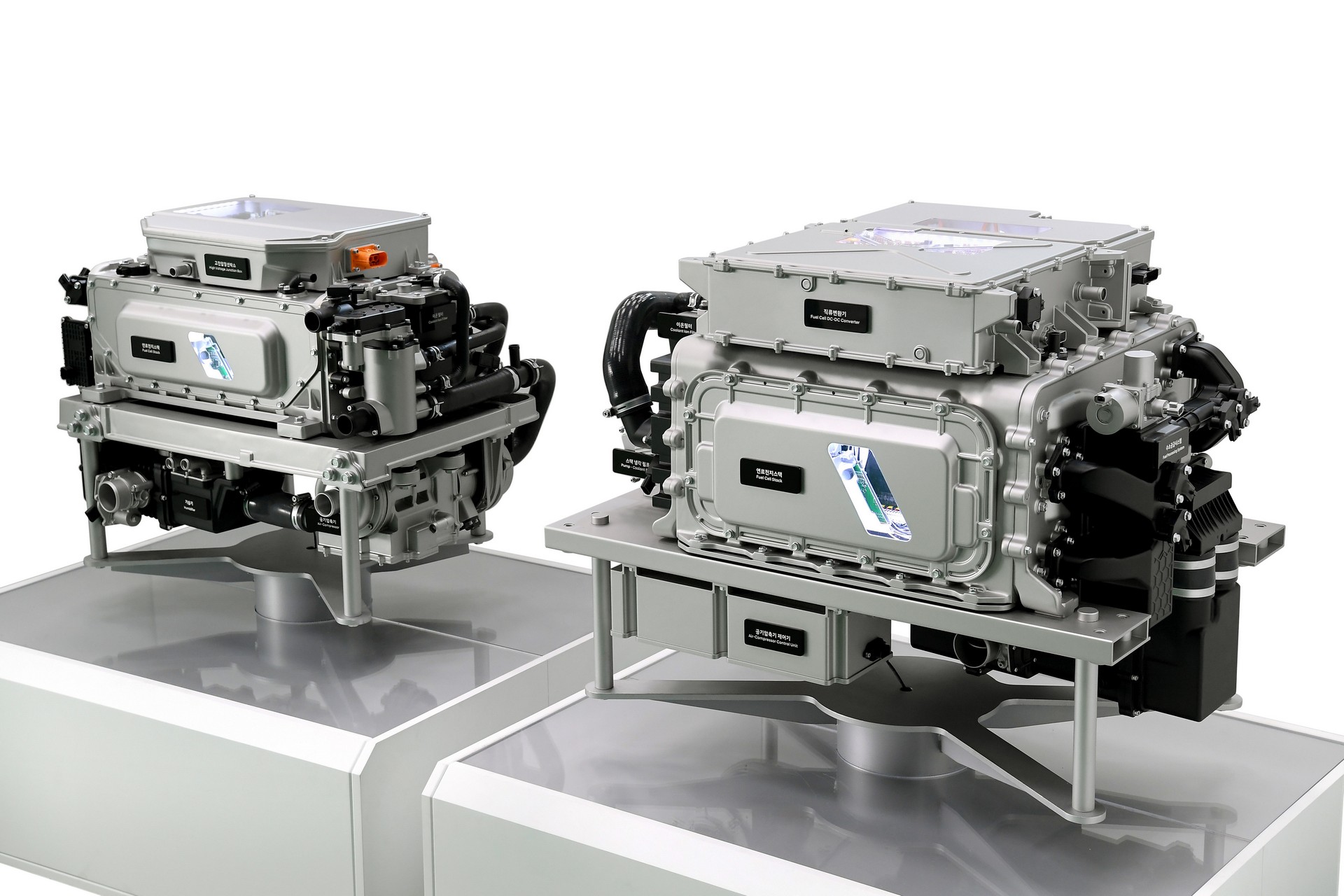 In order to achieve this, the company is planning to introduce their next-generation fuel cell system in 2023. It promises to be 50% more affordable than the current system, while also offering improved durability and output.

The third-generation fuel cell is currently in development, but the company showed off two different versions of it. The 100 kW stack is 30% smaller than the current one and this enables it to be used in a greater range of vehicles and applications. The company also showcased a 200 kW version designed for commercial vehicles and it’s roughly the same size as the current Nexo system, despite having twice the output.

The fuel cells can also be used in a variety of non-automotive applications and Hyundai mentioned using them as an emergency power supply for large ships or IT companies. As part of this effort, 100 kW units can be linked together in a Lego-like fashion to provide combined outputs ranging from 500 kW to 1 MW.

The company also revealed a “Full-Flat System,” which has a reduced stack height of 9.8 inches (25 cm). This allows fuel cells to be used in vehicles – ranging from buses, trams and MPVs – with minimal clearance.

Much of the news focused on commercial vehicles and Hyundai expects to become the first global automaker to apply fuel cells to all their commercial vehicles by 2028. The company isn’t a stranger to this as the XCIENT Fuel Cell was the world’s first mass produced fuel cell heavy-duty truck and is already in use.

There are a number of other vehicles on the horizon including a tractor based on the XCIENT Fuel Cell, which will arrive in 2024. Hyundai also announced plans for a 5- to 7-meter (16.4 – 23 feet) purpose built fuel cell vehicle, which will compete in the global light commercial vehicle segment.

While hydrogen-powered commercial vehicles will help to significantly reduce CO2 emissions, the real highlight of the event was the introduction of a handful of concepts. The most eye-catching was the Vision FK, which is a high-performance model that is apparently based on the Kia Stinger.

During a press conference last night, Hyundai’s research and development boss revealed the model was developed with the assistance of Rimac and described it as “technical overkill.”  Albert Biermann added the car’s development was an exciting challenge and hinted at the possibility of taking it racing.

On the trucking side of things, there’s the Trailer Drone concept. It’s essentially a container, which rides on two e-Bogies.  The latter are the star of the show as they’re essentially fully autonomous vehicles with the top half cut off.

Each e-Bogie has a fuel cell powertrain as well as wheels with independent steering. The latter allows for unprecedented maneuverability and even a Hummer-like crab walk function.  Furthermore, the company envisions a Cluster Mode, which would enable “multiple Trailer Drones to travel together in an almost train-like configuration.”

The e-Bogies can be used for other applications and that’s apparent with the Rescue Drone concept. It’s effectively an e-Bogie, which has been outfitted with a number of drones. The concept is envisioned to be used in emergency situations, such as fighting fires.

Hyundai also showed off a portable hydrogen refueling station as well as a Rescue Hydrogen Generator Vehicle. The latter can be used to supply power to stranded EVs in remote, off-road areas.

According to Chairman Euisun Chung, “Hyundai Motor Group’s vision is to apply hydrogen energy in all areas of life and industry such as our homes, work places and factories. The goal is to make hydrogen readily used for everyone, everything and everywhere.” He went on to say the company wants to offer “practical solutions for the sustainable development of humanity” and help foster a hydrogen society by 2040.

While some of the ideas seem a little far fetched, Hyundai wants to educate people about hydrogen and get them excited about fuel cell vehicles.  The company is also optimistic about the future of the technology as a number of governments have announced plans to support efforts to promote fuel cell vehicles.