Off-road pickups are big business and there was little doubt the 2022 Toyota Tundra would receive a rugged TRD Pro variant.

With that in mind, we’re taking a closer look at the off-roader as well as the TRD packages being offered on less extreme versions of the pickup.

Starting with the Tundra TRD Pro, there’s no mistaking it for anything else as it features a unique grille with “TOYOTA” lettering as well as an integrated light bar. If those telltale signs weren’t enough, the model also sports clearance-style lights and “technical camo” on the bumpers and fender flares.

Also Read: The 2022 Toyota Tundra Is A Tougher, Twin-Turbo’ed Pickup 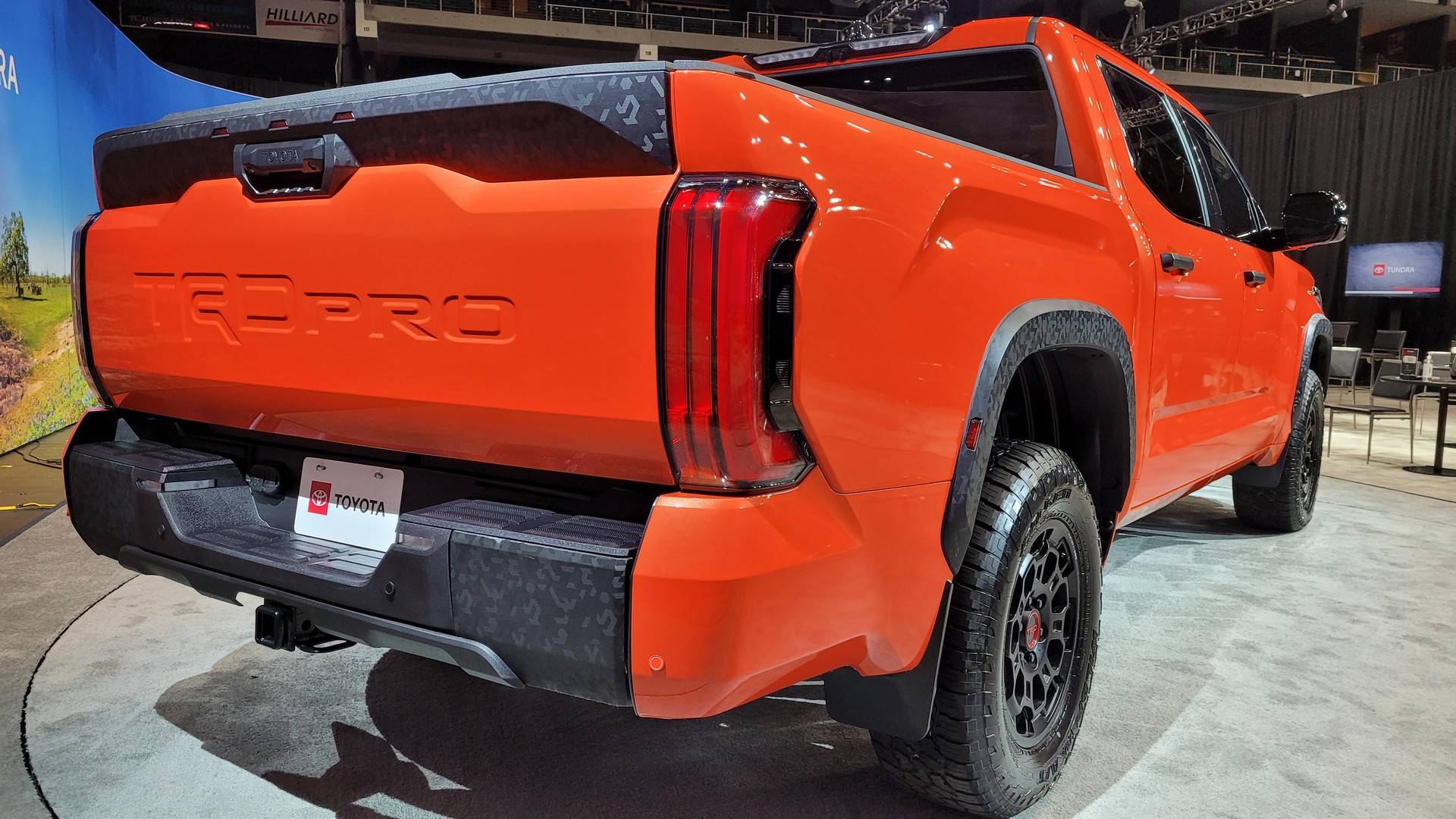 Inside, drivers will find a 12.3-inch digital instrument cluster and unique seats with “TRD Pro” embroidery as well as a camouflage pattern. Other highlights include alloy pedals, a TRD-branded steering wheel and prominent “TOYOTA” lettering on the dashboard.

Looks are only part of the equation as the TRD Pro comes equipped with 2.5-inch FOX internal bypass shocks with piggyback reservoirs to house additional oil for improved off-road performance. They also use a new polytetrafluorethylene-infused fluid, which helps to reduce friction and improve on-road comfort.

Getting back to the Multi-Terrain Monitor, it provides front, rear and side camera views so drivers are always aware of their surroundings.  More importantly, it functions as a digital spotter and can help you avoid troublesome obstacles.

Power is provided by the all-new i-Force Max powertrain, which consists of a twin-turbo 3.5-liter V6 engine, a 10-speed automatic transmission, and a motor generator that is sandwiched between them. It produces an impressive 437 hp (326 kW /443 PS) and 583 lb-ft (790 Nm) of torque, which means the model has slightly less power than the Ford F-150 Raptor but significantly more torque.

TRD Sport And Off-Road Packages Will Also Be Available 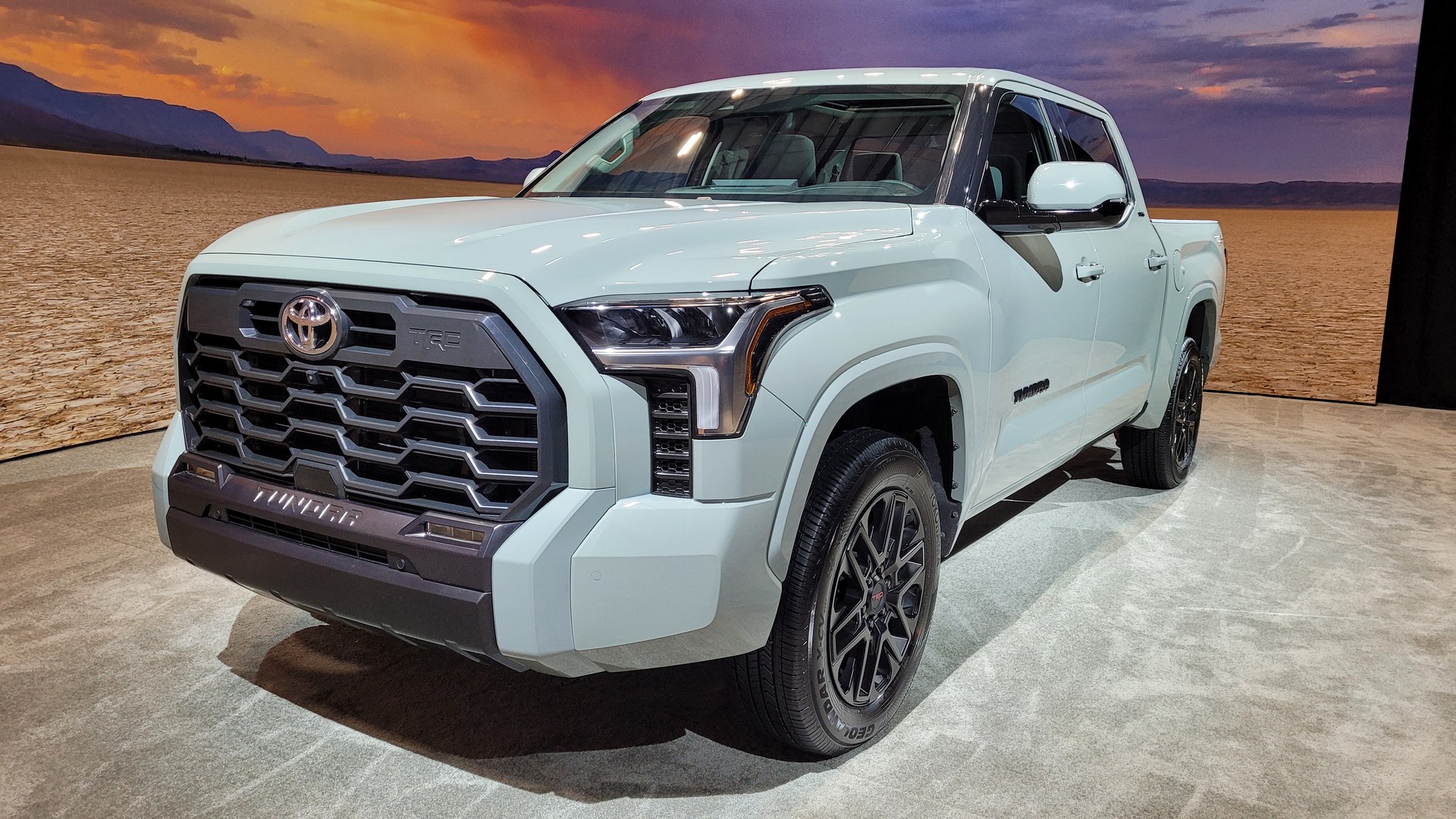 We’ll learn more about the TRD Pro in the coming weeks, but the 2022 Tundra will also be offered with two TRD packages.

The TRD Off-Road package is available on the SR5, Limited and 1794, and it includes a TRD-branded grille, skid plates and 18- or 20-inch TRD wheels. The package also adds an off-road focused suspension, mud guards and a leather-wrapped TRD shifter. Models equipped with four-wheel drive also have an electronic locking rear differential as well as the aforementioned Crawl Control and Multi-Terrain Select systems.

At the opposite end of the spectrum, the Tundra SR5 can be equipped with a TRD Sport package. It features a TRD-branded grille, a lowered sport suspension and 20-inch wheels. Buyers will also find a leather-wrapped TRD shifter and special badging.

The 2022 Toyota Tundra will arrive at dealerships later this year and, in the meantime, check out our in-depth coverage of the truck as well as its all-new infotainment system.