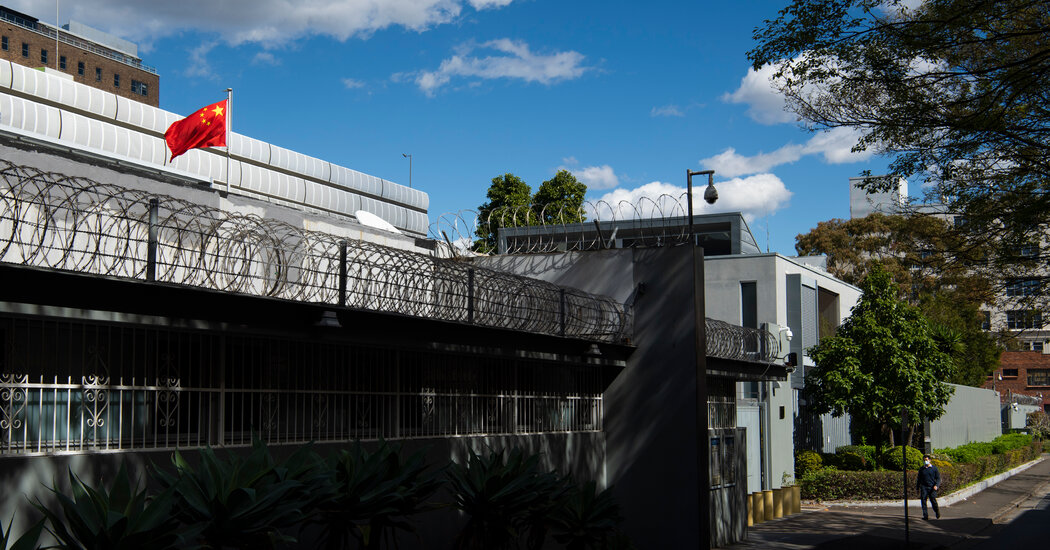 CANBERRA, Australia — When Australia’s prime minister, Scott Morrison, proclaimed a new “forever partnership” strengthening military ties with the United States, it was a decisive step in his country’s trailblazing push against a more assertive China.

The decision this month to acquire American nuclear-powered submarines showed that even as Beijing has pummeled Australia with sanctions and a freeze on high-level talks, Australian officials are determined to maintain a sharp turn in policy and tone toward China, despite relations descending into their deepest chill in decades.

“This was Australia acting in our national interests to ensure our national security in our region,” Mr. Morrison told reporters while visiting the United States last week. “That is our job, to keep Australians safe.”

Behind the resolute face on the international stage, though, there are murmurs of disquiet at home. Four years into its confrontation with China, Australia is wrestling with the economic and political consequences — including an erosion of democratic tolerance — and wondering what’s next.

New broad-brush laws to counter Chinese government influence have put Australia’s growing ethnic Chinese population under a pall of suspicion, leaving many fearful of discussing the topic, even with relatives. Seemingly benign foreign interactions — not just with China — have been snarled by red tape and ill-focused information collection aimed at combating underhand interference.

Farmers and winery owners wonder when, if ever, they will again be able to sell to Chinese customers. Proposed investments by Chinese companies into industries such as dairy farms have been blocked by the Australian government, often with little explanation. Even a promising scientific collaboration on climate change was abruptly canceled.

Allies have applauded Australia for showing how the world’s smaller powers can redefine ties with China, and American officials offered praise last week during Mr. Morrison’s trip to Washington for a meeting with the leaders of the United States, Japan and India — the so-called Quad. But to increasingly vocal critics, Australia also offers warnings about the risks of losing strategic focus in the heat of resisting China.

“‘Let’s learn from Australia’ has become axiomatic,” said Andrew Chubb, an Australian researcher at Lancaster University in Britain who has written a study of Australia’s response to Chinese government activities.

“But there’s a range of cautionary lessons that other countries also need to learn out of the Australian experience,” he added, “particularly the unnecessary alarmism, which in turn drove overreaching national security legislation.”

Under Xi Jinping, China has become more prickly and punitive, intent on never backing down when challenged, and even most critics of Australia’s tougher policies also blame Beijing for the deterioration in relations.

The Chinese government’s combative rhetoric, including a list of 14 grievances handed to journalists late last year, has compounded a sharp drop in Australian public views of Beijing.

“If their intention was to change our public policy settings, they’ve just guaranteed that they will not,” James Paterson, an Australian senator from the governing center-right Liberal Party, said in an interview.

“What we need to do is to demonstrate our resilience,” he said. “Not only will that be good for Australia, it will be good for every other country that’s watching this closely.”

So far, Australia has largely weathered the economic blows, as China has yet to find a viable alternative for Australian iron ore — worth $53 billion in the first half of this year — and as Australia has found new markets for some goods.

But some former Australian officials argue that the lost market share in China will hurt more over time, and that the government’s attachment to its reputation as a plucky pacesetter against bullying by Beijing has held back healthy debate over how a middle power like Australia should manage relations.

A reluctance to publicly detail how Australia may cope with potentially years of shunning by China — its largest trading partner — has magnified the uncertainty, as have ominous comments from the defense minister, Peter Dutton, about growing risks of war. Australia’s new partnership with the United States and the United Kingdom, known as AUKUS, appears likely to reinforce a focus on security at home as well.

“The knock-on effect of all of these announcements will be to further entrench suspicion of China and suspicion of the so-called ‘enemy in our midst,’” said James Curran, a former government official and a history professor at the University of Sydney who is writing a study of Australian relations with China. “We’re now seeing the government put the country onto a very clear and unequivocal security footing for the 21st century. It’s a moment that has crystallized the worries about Xi Jinping.”

Less than a decade ago, Australia and China were in a warm embrace. Mr. Xi appeared personally invested in the relationship, doting on marsupials and signing a free-trade agreement.

By 2017, however, Australia’s prime minister at the time, Malcolm Turnbull, had arrived at a much bleaker assessment of China’s direction, declaring that his country would “stand up” to Chinese meddling.

Last year, Mr. Turnbull said in an interview that Australia had come to see Mr. Xi’s government as imperial, and that it needed to resist Beijing’s “bullying.” Like other Western powers and Asian allies, Australia was increasingly alarmed about China’s regional demands and power, including in the South China Sea.

In Australia, there was added domestic concern about Chinese government efforts to influence companies, universities and politicians. The issue erupted in 2017, when news reports revealed that an Australian Labor Party senator, Sam Dastyari, had given a statement supporting China’s maritime claims after accepting money from a Chinese businessman.

Not as loudly spoken was growing worry that the United States’ weight in the region was weakening compared to China’s, said Richard Maude, a former diplomat who helped write an Australian foreign policy document in 2017 that laid out the shift in strategy.

Australian government officials knew that China was likely to react harshly to the hardening policies, Mr. Maude said. Less foreseen was the damage Australia would inflict on itself.

The rising concern about Beijing’s political influence fed suspicions that politicians, business executives, academics and above all members of Australia’s large ethnic Chinese population had been co-opted.

When three Chinese Australians appeared before an Australian Senate committee hearing last October, Senator Eric Abetz, of the Liberal Party, asked them whether they were willing “to unconditionally condemn the Chinese Communist Party dictatorship.”

After one of the witnesses asked why Chinese Australians would be singled out to declare their condemnation, Mr. Abetz bristled. “But can you not pick a side to condemn the oppressive ugliness of the communist regime in China?” he said.

Jieh-Yung Lo, director of the Center for Asian-Australian Leadership at the Australian National University, said that Australians of Chinese heritage, including those whose families have been in Australia for generations, felt “wedged into a corner.”

“Unless we go out and condemn China, our place in Australia will be in doubt,” he said.

Anxiety among Australians of Chinese descent has focused on the new legislation against foreign interference. The laws require registration and self-reporting for anyone engaged in activities on behalf of any foreign government, not just China. When Mr. Turnbull introduced the legislation, he said that it was intended to protect Chinese Australians and other communities from intimidation.

Defenders of the laws say they have helped weaken Chinese government efforts to dominate local Chinese Australian groups. Still, the influence law and an accompanying expansion of espionage crimes have yet to produce a conviction or a significant increase in transparency around lobbying on behalf of China.

Such efforts have cast an intimidating shadow over Chinese Australians, discouraging them from joining public life, said Yun Jiang, a former policy adviser in the Australian government who now produces the China Neican newsletter.

Critics of the influence law now include at least two former prime ministers, one of them Mr. Turnbull. Now retired from politics, he registered under the law because of speeches he gave in South Korea and Taiwan. He said such a requirement was “not intended or contemplated” when he brought in the legislation.

Several scholars have argued that Australia’s new laws indiscriminately stigmatize any association with a Chinese institution, from the military to musical troupes.

“Many people seem to think that we need to change ourselves in order to compete with China,” Ms. Jiang said, “but that change can mean becoming more like China.”

Science has become another area of vaguely defined sensitivity after the government turned its attention to possible illicit influence and espionage in universities and research institutes. Recently, the concerns seeped into a subject that the United States has identified as an area of shared interest with China and Australia: climate change.

Australia’s top scientific body said in June that it would end a partnership with Qingdao National Marine Laboratory Center in China. The decision followed comments in Parliament by a senior intelligence official who said foreign nations could use ocean research to gain an edge in naval warfare. The scientists involved said they were baffled by the assertion because their research focused on global ocean trends that would be of no use for navigation.

Many observers say the scope of discussion tolerated inside the government has narrowed, creating dangers of groupthink.

The intense focus on security, critics argue, has increased the risk of policy mistakes by diminishing Australia’s understanding of China.

“I think there’s been a lack of attention to the complexity of dealing with China,” said Linda Jakobson, the founder of China Matters, an organization that has hosted discussions and studies about policy toward Beijing, and that had its Australian government funding cut significantly over the past year.

“There is a great hesitancy to bring up the good, the bad and the ugly — to have a differing view,” she said.