General Motors has announced its next-generation hands-free driver-assist technology. Dubbed Ultra Cruise, it will eventually make way for door-to-door hands-free driving across the U.S. and Canada. According to GM, it ultimately enables “hands-free driving in 95 percent of all driving scenarios”.

When the system is launched in 2023, Ultra Cruise will support 2 million miles of roads, that will vary between city streets, country roads, and highways. It’s a significant upgrade on the 200,000 highway miles offered by Super Cruise.

Ultra Cruise will use a combination of cameras and radar, similar to Super Cruise before it. But crucially, Ultra Cruise adds integrated LiDAR behind the windshield. This is a key differentiation between the two systems — whereas Super-Cruise-equipped vehicles rely on pre-mapped LiDAR routes, they don’t feature integrated LiDAR for real-time mapping of their surroundings.

With on-board LiDAR in the mix, Ultra Cruise-equipped vehicles will be able to cover 2 million miles of paved roads at launch, which will expand to 3.4 million miles sometime after launch. Roads covered will include city streets, subdivision streets, and paved rural roads, in addition to highways. 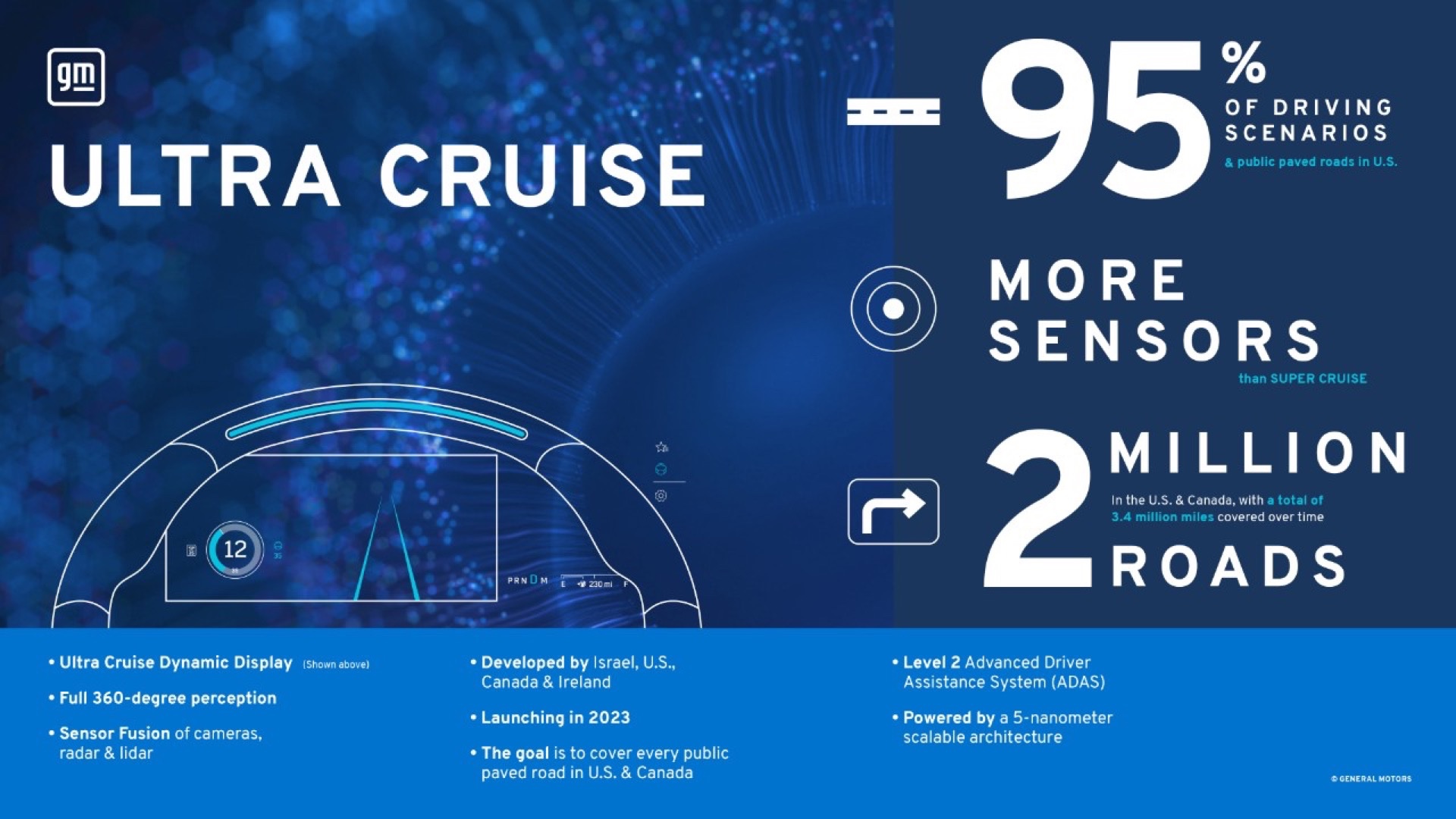 Super And Ultra Will Coexist

Ultra Cruise won’t be an outright replacement for the Super Cruise system that already features on a range of GM products. Instead, Ultra Cruise will be reserved for premium offerings, intending to supplement the American auto manufacturer’s arsenal of advanced driver tech.

While there’s no word on what vehicles will feature which systems, Super Cruise will be extended to more mainstream products. “The combination of Ultra Cruise for premium offerings and Super Cruise for lower-cost products will enable us to offer driver-assist technology across price points and segments,” said Doug Parks, GM executive vice president of Global Product Development.

Ultra Cruise will build upon the interface developed for Super Cruise, which was launched in its first iteration back in 2017. Notably, the system remains “Level 2,” meaning that drivers will need to stay alert at all times.

The Ultra Cruise Dynamic Display will remain in the driver’s line of sight, telling them when they need to take over. Ultra Cruise will use the same camera system GM includes in Super Cruise vehicles to monitor driver attentiveness.

Like Super Cruise was in 2017, Ultra Cruise will first be offered on Cadillacs before being rolled out to other “select models” in GM’s range.