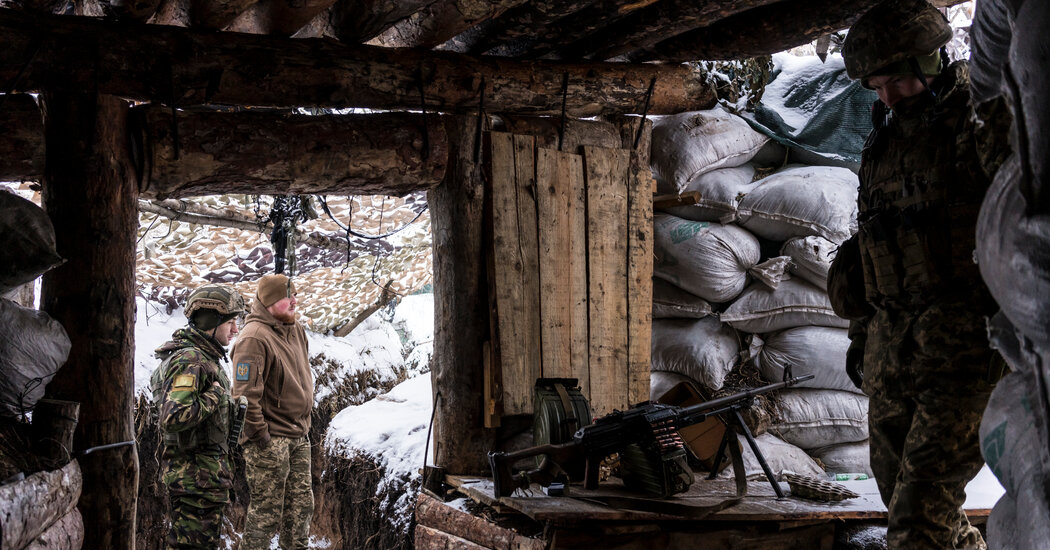 SVITLODARSK, Ukraine — The Ukrainian soldiers watch and wait, nervously peering through a periscope from an icy trench at a forward observation post in eastern Ukraine.

Western governments have sounded alarms that Russia is prepared to attack Ukraine at any time. The Biden administration is considering moving troops, warships and artillery into Eastern Europe and NATO announced on Monday that member countries are sending ships and jets to the region.

But how, exactly, military action might start has become an anxious guessing game for military analysts, for Western and Ukrainian officials — and not least for Ukrainian soldiers, who are likely to be the first to find out.

“I would rather have peace,” said Ihor, a sergeant who is the Ukrainian unit’s cook and offered only his first name and rank, in keeping with military rules. “I have two kids at home.”

If an incursion does come, most military analysts agree it won’t begin with a massive show of force — tanks rolling over the border or a sudden and devastating strike from the air. Rather, it would start with a more ambiguous, limited action that Moscow would use as justification for a wider intervention.

Such an action, American and Ukrainian officials say, could come in many different forms — the seizure by Russian-backed separatists of a disputed piece of infrastructure, like an electrical plant, for instance.

It could even start invisibly, with gas wafting through the air, if Russia decided to stage an accident at an ammonia plant in this area, and then send in troops under the guise of bringing it under control. That possibility was raised this month by Ukraine’s military intelligence agency.

Ukraine estimates that Russia has about 127,000 troops near its borders. The buildup, said Dmitry Adamsky, an expert on Russian security policy at Reichman University in Israel, “is visible enough to let people imagine a range of scenarios that might happen. At the same time, it’s uncertain enough to conceal the strategic intention.”

Russia has repeatedly denied in recent weeks that it has plans to invade Ukraine and said it is Russia whose security is threatened — by NATO exercises near its borders and weapons shipments to Ukraine.

Analysts say Russia has a rich repertoire of tricks that make it all but impossible to guess a first move. It demonstrated that with its first incursion into Ukraine in 2014. At the time, masked, mysterious soldiers appeared in Crimea in a military intervention that Russia initially denied but later acknowledged. Russian soldiers said to be “vacationing” or “volunteering,” turned up in eastern Ukraine later that year.

In fact, nearly every Soviet and Russian military intervention of the past half century, from the Prague Spring to Afghanistan to the war in Chechnya, has begun with an operation of disguise or misdirection, intended to sow confusion.

A limited incursion might also serve Moscow’s goal of dividing NATO allies, with some countries seeing the action as insufficient cause to sanction Russia, and others disagreeing. President Biden last week hinted at potential divisions within the Western alliance over how to react to a provocation that falls short of an invasion — comments that the U.S. then tried to walk back after a backlash from Europe.

For soldiers in the East, where Ukraine has been fighting Russian-backed separatists for nearly eight years, the lack of clarity has made for a nerve-racking time.

“But we cannot know everything,” he added. “It’s a game of chess where you cannot see the moves in advance. Who will do what to whom? We don’t know.”

In one ominous hint of how Russia might justify an invasion, its ambassador to the Organization for Security and Cooperation in Europe, Konstantin Gavrilov, said Sunday that Moscow would respond if its citizens were threatened. Russia has granted citizenship to tens of thousands of people on the separatist side of the eastern Ukraine conflict, any of whom might suffer in an escalation.

“We won’t tolerate it if they attack our citizens,” Mr. Gavrilov said. There wouldn’t be another warning, he said. “Only dogs bark. A wolf bites, and that is it.”

Ukrainian officials and U.S. diplomats have focused on one possibility in particular in the region: an accident at one of the most dangerous industrial sites in eastern Ukraine, an ammonia gas factory in separatist-held territory a few miles from the Ukrainian frontlines.

Ammonia is a component of fertilizer but can be lethal in high concentrations.

A chemical leak releasing a toxic plume is one prime possibility, potentially poisoning soldiers and civilians on both sides of the front, officials say. It might justify, for example, a Russian deployment of emergency cleanup crews with an escort of soldiers.

In December, Russia’s defense minister, Sergei K. Shoigu, said, without providing evidence, that American mercenaries had brought unspecified chemicals into eastern Ukraine. That suggested he might be laying the groundwork to blame a poisonous gas leak on the Western-backed Ukrainian government.

Ukrainian officials, meanwhile, have publicly warned that Russia shipped canisters of gas to the factory site, adding to vast stockpiles already there. The sprawling, rusty factory is poised for an accident, they say.

Understand the Escalating Tensions Over Ukraine

Ominous warnings. Russia called the strike a destabilizing act that violated the cease-fire agreement, raising fears of a new intervention in Ukraine that could draw the United States and Europe into a new phase of the conflict.

The Kremlin’s position. President Vladimir V. Putin of Russia, who has increasingly portrayed NATO’s eastward expansion as an existential threat to his country, said that Moscow’s military buildup was a response to Ukraine’s deepening partnership with the alliance.

With both Russia and Ukraine now talking about chemical leaks in this area, local authorities have plans to sound a siren to warn civilians, though it is unclear how they might protect themselves other than closing windows.

But a gas leak is just one possibility. Causes for escalation in eastern Ukraine along the front abound, said Maria Zolkina, a Ukrainian political analyst, including the possibility of a limited advance by the separatists to seize disputed infrastructure such as waterworks or power plants.

Hostilities could also start with a naval clash in the Azov Sea, where Ukrainian and Russian vessels operate in close proximity, or a so-called false flag attack that would target Russian-speaking citizens in separatists areas. Analysts say a purely political casus belli could also arise, such as a Russian claim that American, British and other NATO countries are providing weapons to Ukraine that pose a risk to Russian security.

A limited action might exert political pressure on the Ukrainian government to accede to Moscow’s terms for a settlement in eastern Ukraine, which would require admitting figures from the Russian-backed separatist movement into Ukraine’s Parliament. Or it could presage a wider intervention: Russian airstrikes, amphibious landings or a tank assault across the border from Belarus, a Russian ally.

At the Ukrainian position on this section of the Eastern front, the surrounding landscape is an open, snowy steppe. Soldiers keep watch for infantry or tanks.

Mindful of the ammonia factory six miles away, they also keep gas masks ready, though they do not carry them every day, said Lieutenant Stepan, the commander.

Out in the open fields, a freezing wind rustled the dry grass and shadows of clouds played across the empty flatlands. All was quiet on a recent visit by Ukrainian and foreign reporters.

A sergeant, who also offered only his first name, Nikolai, said he was ready to fight, however the conflict might begin. But he hoped not to.